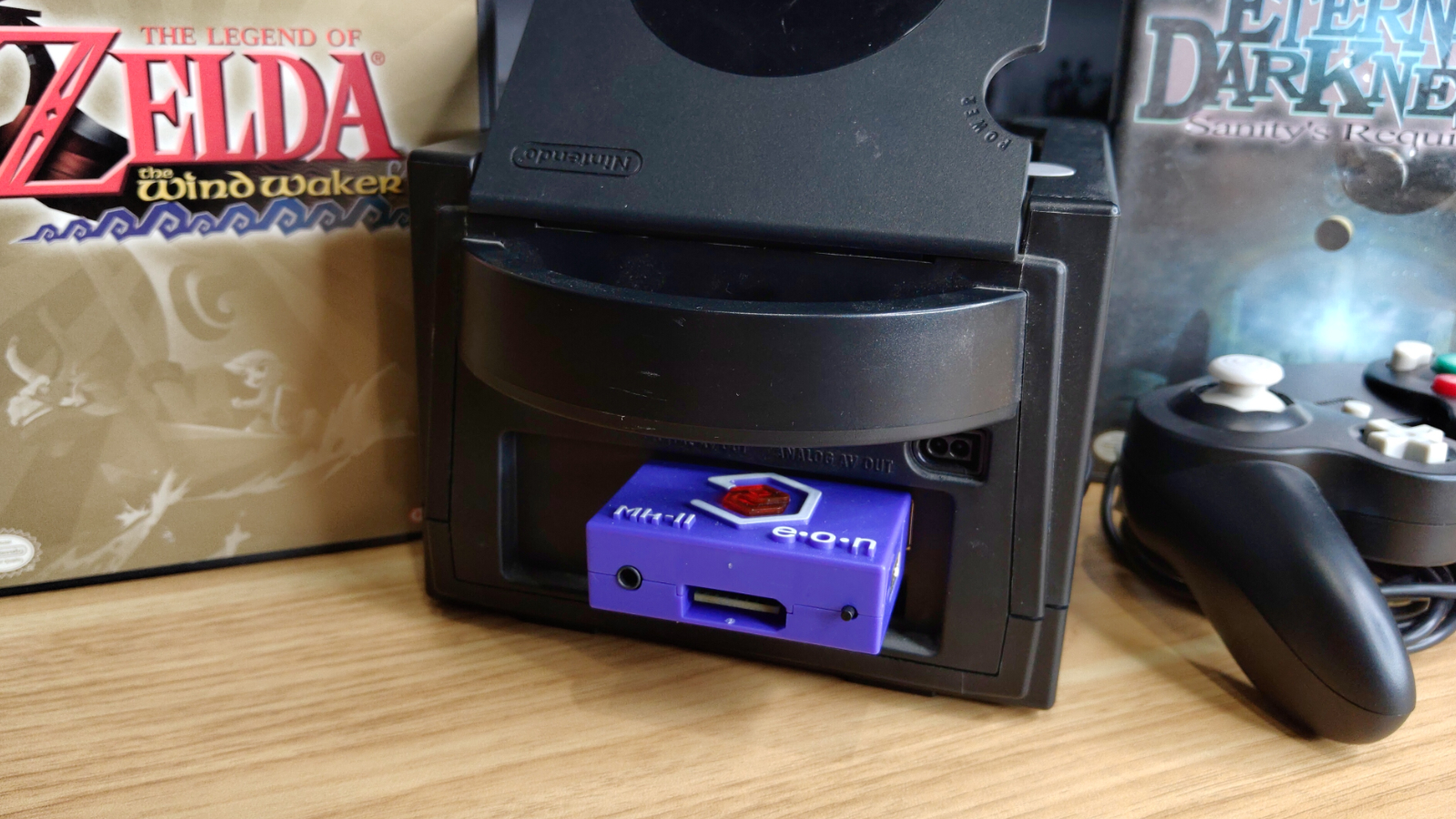 I’ve got a fever, and the only prescription is more Metroid. With Metroid Dread (our review) being as amazing as it is, I suddenly got the urge to play through games like the Metroid Prime trilogy, Eternal Darkness, The Legend of Zelda: Twilight Princess, The Legend of Zelda: Wind Waker, and Super Mario Sunshine. Unfortunately, none of these games are playable on the Nintendo Switch (though both Zelda games got the royal HD treatment on the Wii/WiiU). If you are going to hunt Metroids on Talon IV, you’ll have to do it on the Wii with pointer controls or Gamecube in jaggedy 480i, or worse, having to find a tube TV to play it on, right? Well, not any more.

A company called EON has released a device called the EON MK-II GCHD which looks to bring the Gamecube into the world of HDMI, but with a few additional aces up its sleeve. Before we get into all of that, let’s address one of the tougher nuts to crack — the Gamecube Component Cable. Most of us playing on a Gamecube at launch were rocking composite cables — the three-cable analog format (one video, and left/right audio) that carries standard-definition video at 480i resolution over a single channel. Component gave us three video channels and a left/right channel, allowing us to hit 480p. For reasons well beyond my comprehension, the 480p/60Hz official component cable from Nintendo will set you back a staggering $399. The best you are going to get, if your TV even has a component connection, is 480p with 60Hz refresh rate. Let’s talk about connectivity. 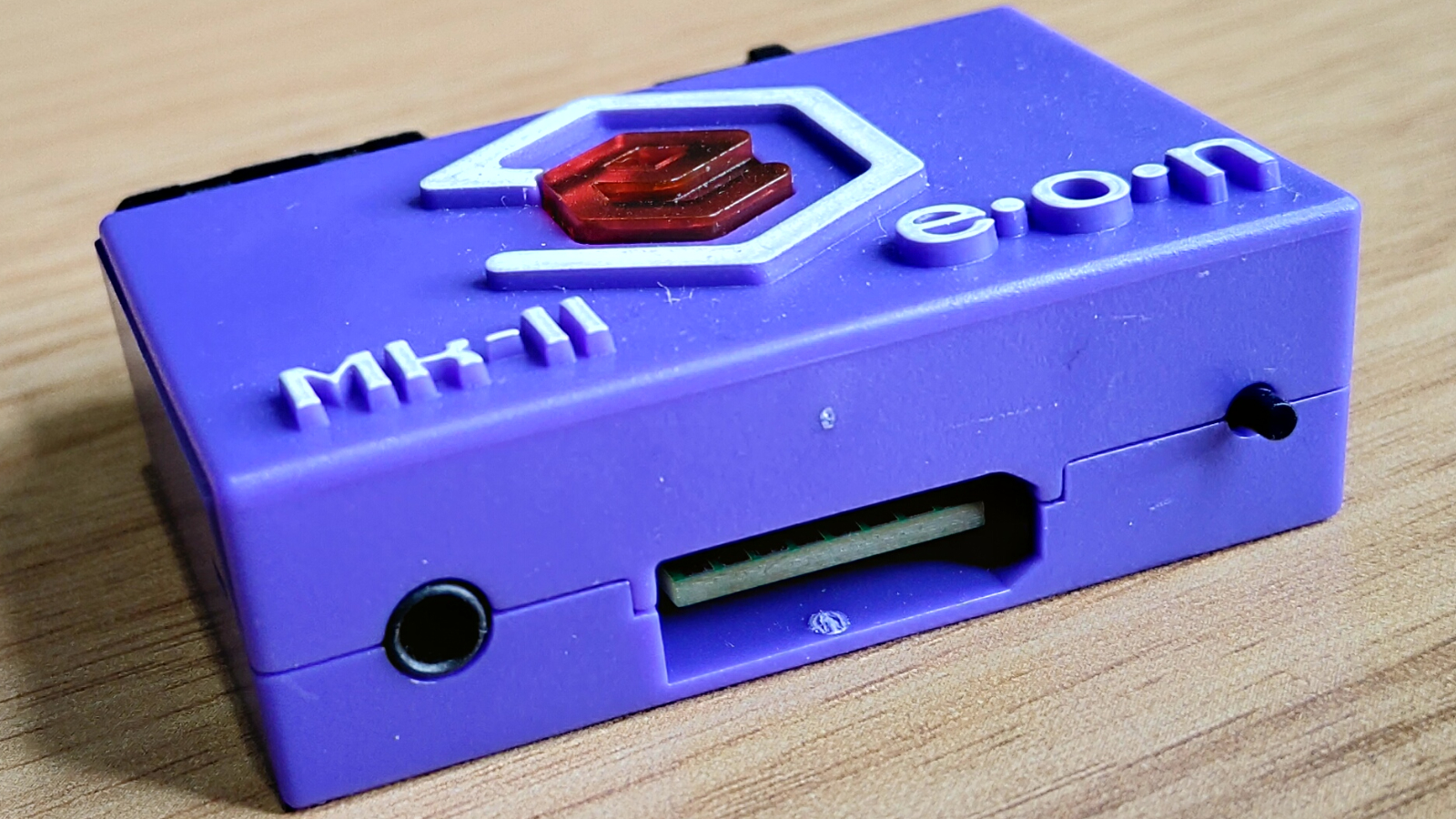 If you’ve got an original Gamecube (specifically DOL-001 model) you’ll be happy to hear that you can dodge the need for a costly composite cable as the EON MK-II GCHD connects directly to an otherwise unused port on this model. Originally designed for 3D, this port is labeled “Digital AV Out”, and the MK-II plugs directly into it to perform its magic. What’s the slight of hand? The MK-II plugs into this Digital AV Out, as well as the Analog AV Out (though only for stability) to output to an HDMI port on the device. How would a lossless digital signal look compared to those blurry 480i nostalgic memories? Time to find out!

If you want to talk about resolutions this low, you need to understand what Progressive and Interlaced are. Progressive scan means the image is built one line at a time from top to bottom, restarting at the top to render the next frame for every refresh of the screen. Interlace, on the other hand, is rendered in two passes. The first pass will render lines 1, 3, 5, 7, and so on, with the second pass rendering 2, 4, 6, 8, etc. until the entire image is rendered. With interlace, the image is essentially rendered in halves. Unfortunately, this results in a blurry image, especially with fast-moving images, which is especially noticeable in games like FZero GX.

The official component cables from Nintendo had a MXB012355 CMPV-DOL Digital-to-Analog converter built right in, but low adoption rate (less than 1%) caused Nintendo to discontinue not only the cable, but also the port on the rear of the system entirely. In fact, that’s why only the 001 model of Gamecube can even use them, or consequently, the EON MK-II GCHD as well. 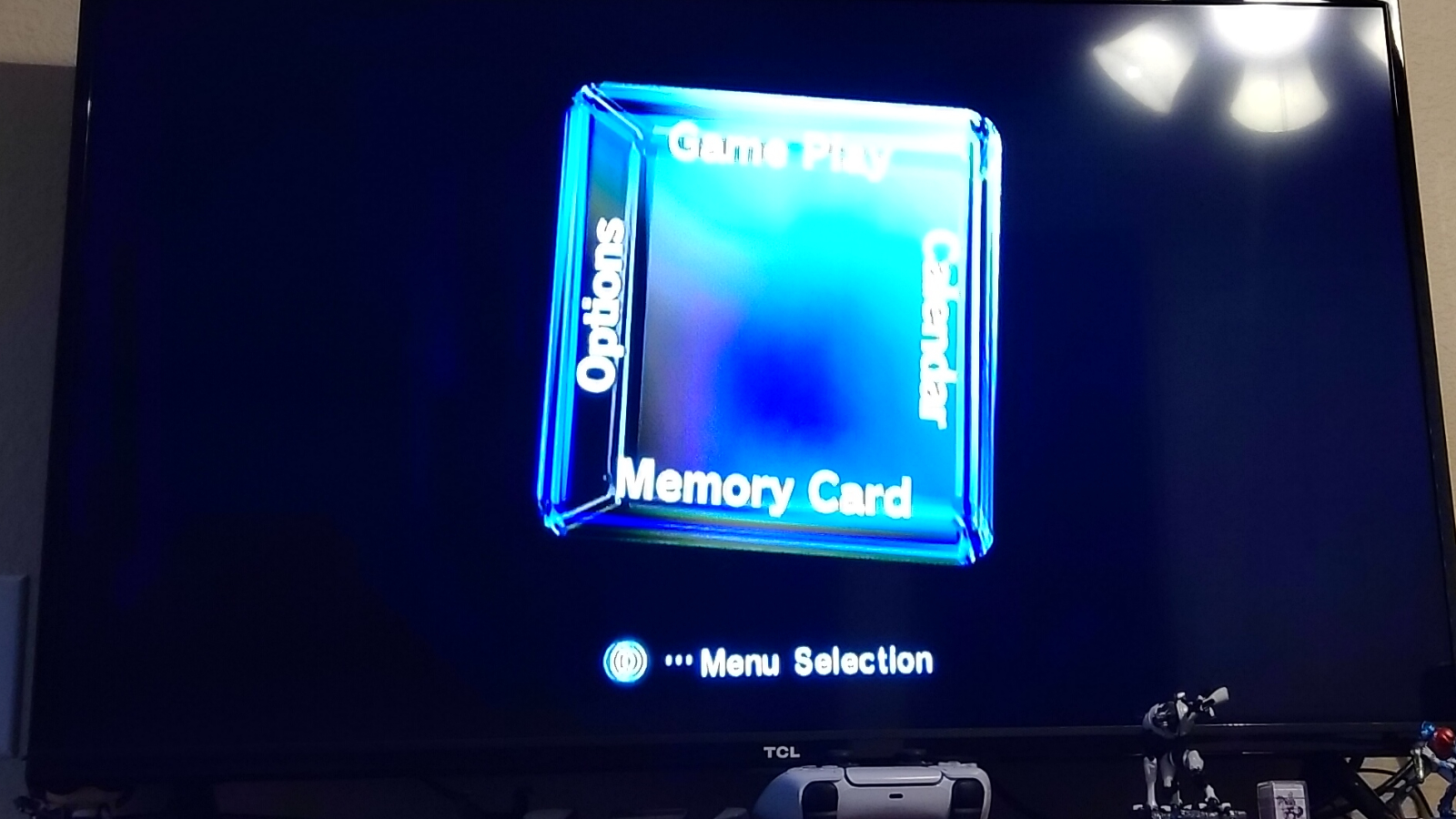 When was the last time you saw THIS screen?

Synching this up with a remote was extraordinarily easy. Pressing the small button on the back for a moment, the MK-II prompted me to press various buttons on my TV remote to set up, down, left, right, back, and enter. With that set up, I was able to configure the entire device without the need to include a dedicated remote with the device — I can simply use any remote I’ve got laying about — smart.

There are a wealth of options within the MK-II to configure the system to look precisely as you want it to, including adjusting the scanline strength, linedoubling, volume, and even whether it runs at 480p — the obvious reason why most people would purchase this device in the first place. At the bottom of the screen is the confirmation of all of your settings with a simple display of the input and output from the device. In my case, the input is 660x448i60, and the output is 720x480p60, meaning it’s taking an interlaced 660 pixel wide by 448 tall image and turning it into a 720 pixel wide, 480 tall progressive image. Simply hold B as you boot the system and the MK-II will automatically bump your image to 480p — it doesn’t get simpler. You can also enable 16:9 aspect ratio in these menus, though very few games support it. Burnout, Dead to Rights, Eternal Darkness: Sanity’s Requiem, Final Fantasy Crystal Chronicles, Fire Emblem: Path of Radiance, F-Zero GX, Gun, Need for Speed Underground and its sequel, TimeSplitters: Future Perfect, and both Tony Hawk’s Underground titles are the big standouts in the short list.

There is another scenario that makes this device a must-have — competitive play. Let’s face it, while the new Smash Bros. is the new hotness, the competitive scene lines up hundreds of CRTs every year for competitive play using the original. In that scenario, you are playing it precisely as it was intended. Unfortunately, if you’ve been to any of these events, you are also no stranger to seeing the action pause while they swap out yet another CRT that has met its maker. There are several adapters on the market, but a great many of them either introduce input lag or worse, stretch the image. Either one of these makes them a non-starter for competitive play. The MK-II has neither of these issues. Using the system interface you can tweak all of these settings, or simply run it at default (once you toggle on that sweet 480p setting) and enjoy it at whatever aspect ratio the game shipped with.

Also on the rear of the MK-II is a 3.5mm audio jack. This can be used for a pair of headphones if you wish, though it’s worth noting that the audio will still come through your HDMI cable at the same time, meaning you can stream while using this port for audio monitoring without a hitch. 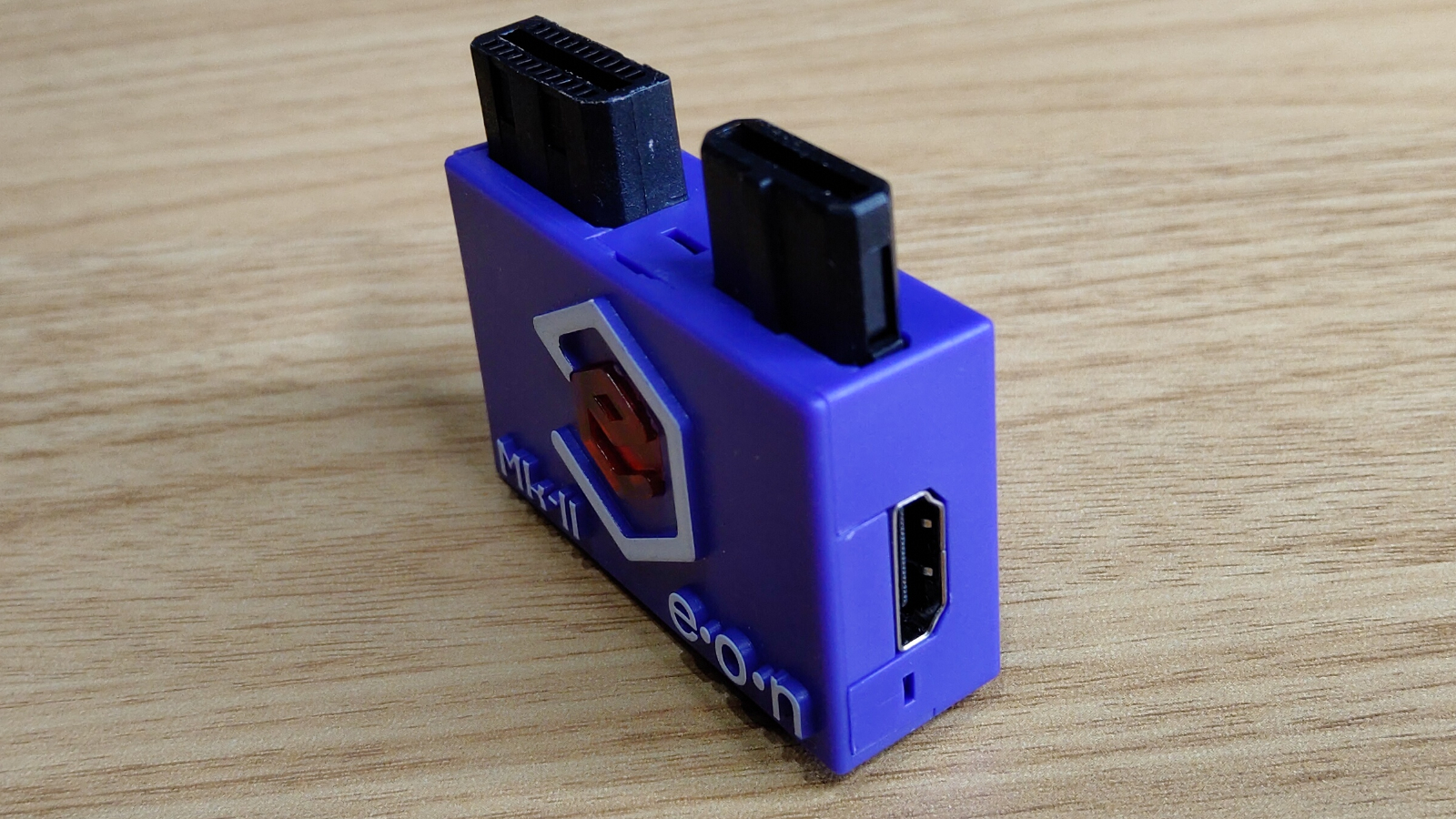 HDMI and Component in one! And they can work simultaneously.

I’ve saved the best for last. Also at the rear of the MK-II is a component port. Now, that’s not shocking, right? The Gamecube has a component port. Well, what if I told you that you can output to both the component port and HDMI simultaneously? I bet I’ve got your interest now. I was unable to find any other competing devices that could do this, and I found quite a few use cases where you might want this outcome. It lets competitive Smash players continue to be competitive using those oh-so-expensive component cables so as to ensure the least amount of input latency, while still outputting to the far-larger HDMI TVs of today, or a capture/streaming device. It’s literally the best of both worlds.

Truthfully, there isn’t a single thing wrong with the EON MK-II GCHD. It does exactly what it sets out to do, and it does it extraordinarily well. It’s simple to use, and it can be updated easily enough. The only thing that may give you pause is the price. The EON MK-II GCHD will set you back $150, and that’s a bit stiff if you aren’t a competitive Smash player. Still — if picture perfect nostalgia is your destination, this is your ticket.

I love technology, and I love it more when it just works out of the box, and that’s precisely what the MK-II GCHD does. HDMI makes playing on modern televisions possible, it enables capture without using ancient and arcane capture methods, and it does so while looking as good as it possibly can.

Ron Burke is the Editor in Chief for Gaming Trend. Currently living in Fort Worth, Texas, Ron is an old-school gamer who enjoys CRPGs, action/adventure, platformers, music games, and has recently gotten into tabletop gaming. Ron is also a fourth degree black belt, with a Master's rank in Matsumura Seito Shōrin-ryū, Moo Duk Kwan Tang Soo Do, Universal Tang Soo Do Alliance, and International Tang Soo Do Federation. He also holds ranks in several other styles in his search to be a well-rounded fighter. Ron has been married to Gaming Trend Editor, Laura Burke, for 21 years. They have three dogs - Pazuzu (Irish Terrier), Atë, and Calliope (both Australian Kelpie/Pit Bull mixes).
Related Articles: EON MK-II GCHD, Hardware
Share
Tweet
Share
Submit