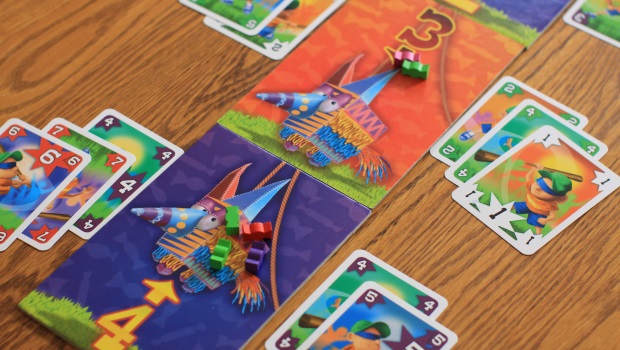 Do you have treasured childhood memories of being blindfolded, spun around until disoriented, armed with a stick twice your size, and tasked with assaulting an animal that was guilty of no crime other than having some PIZAZZ? No? Me neither. Piñatas weren’t really on my radar when I was growing up.

That is probably a good thing. My expectations for PIÑATA (a 2 player card game from Rio Grande) were slim, but I was pleasantly surprised at how fun this light little morsel is.

You get a bag full of little wooden candies, aka piñata innards, for you to collect. Four double-sided cardboard mats represent the piñatas, which will burst open from either the top or the bottom (as indicated by an arrow). The mighty blows you land upon the innocent animal are represented by a deck of cards.

A game based on swinging at a piñata and collecting candy sounds REALLY juvenile to me, and the artwork on the components reinforced that idea. The illustrations remind me of the garish animation in a bad Pixar knockoff. However, I’m happy to say that the game is more engaging than the theme would indicate. And the little candies are ADORABLE.

NOTE: This game is a re-theme of the out-of-print classic, Balloon Cup. A friend of mine was eager to play PIÑATA because he and his girlfriend bring small, fast, 2-player card games when they travel. He enjoyed the game, but decided he would not buy it himself for two reasons. One, the piñata mats are much larger than the corresponding mats in Balloon Cup, making the game much less convenient for travel. Two, the artwork and theme (hot air balloon racing) in Balloon Cup are much more appealing. Having seen pictures of the older game, I have to agree on both points.

While there aren’t any innovative or ground-breaking mechanics in PIÑATA, there are a lot of simple and easily understood gameplay elements that combine into a solid and fun experience. Placing cards with numerical values from your hand into play, in order to compete for a scarce resource, isn’t revolutionary. However, not every game needs revolutionary mechanics in order to be enjoyable.

There is one unusual mechanic worthy of note: playing a card into your opponent’s play area. Each piñata requires a certain number of swings from each player’s side before bursting open. Normally, you can play cards only on your side, unless your side is full, in which case you can play (weak cards!) on your opponent’s side. Playing better cards on your side makes you more likely to win the candy, but playing more cards puts you in CONTROL of the situation faster. A variant rule allows you to play on your opponent’s side at any time, even before your own side is full. This makes the game less challenging by reducing the “hard choices” when you have an unfavorable hand. Still, this might make the game more fun for youngsters.

NOTE for Balloon Cup fans: There are a few minor changes to the game’s design and rules, besides the re-theme. The values and frequency of the cards has changed. Wild cards have been added, and a few other rules have been tweaked. You have been warned.

Clinching a victory before playing the winning card on a piñata is always a good feeling. Knowing that you are one swing away from bursting open a piñata and that your opponent can’t do ANYTHING to prevent it frees you up to go after contested targets. Sometimes I won’t know that I’ve entirely clinched a piñata, but I’m CLOSE ENOUGH that I’m willing to risk being sniped so I can strengthen my position elsewhere. That makes the victory even more satisfying.

On the other hand, you are required to play a card as long as there is a legal move for you to do; you may not discard your hand and re-draw unless you have NO legal moves at all. In a few cases, I was forced to make plays that actually benefited my opponent. I’m sure HE was having a great time, collecting all that candy off of my efforts!

Conclusion: Who should buy this game?

It is unfortunate that Rio Grande chose to go with a silly looking theme and artwork for a reprint of one of their old classics. My fear is that a lot of potential fans of this game will pass it over because of the way it looks. That would be a mistake. However, if you are a fan of Balloon Cup, you need to be aware of the rule changes. I would strongly recommend trying the game before you buy it. The new components and little rule changes might be enough to spoil the experience for you.

PIÑATA is a fine example of a fast, light, 2-player card game. There are enough tactical decisions and cutthroat moments to keep hobbyist gamers interested, as long as they know what they are in for and can get past the childish artwork. This is a game that works well DESPITE its theme. And it works very well indeed.