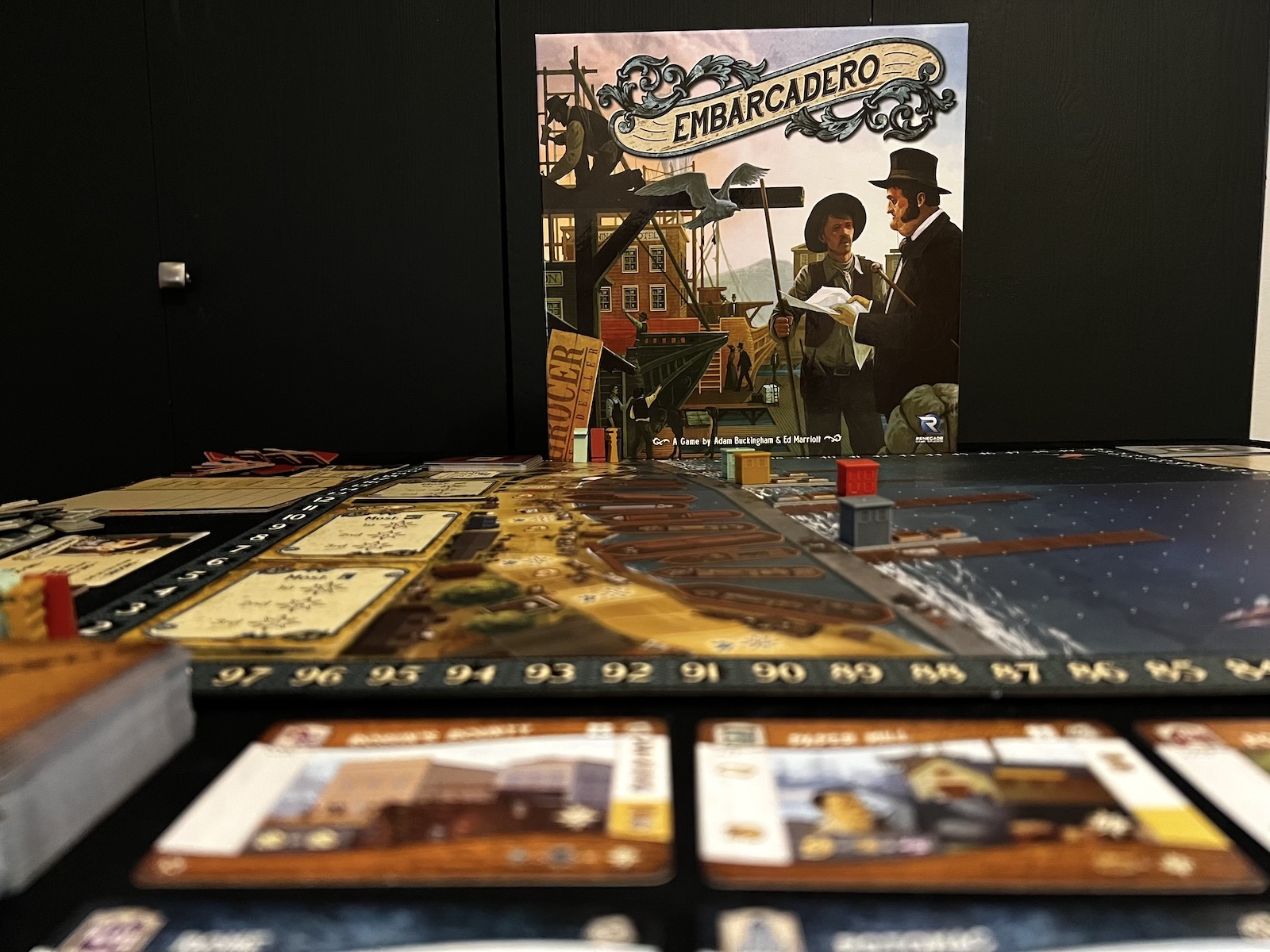 San Francisco: Mid-1800s. At the height of the gold rush, thousands of speculators made their way to the goldfields of California. As they came, hundreds of vessels lay abandoned off the coast. A group of entrepreneurs capitalized on the situation to try and build their own empires with the resources at hand. As time went on, the Embarcadero rose along the shores of San Francisco. 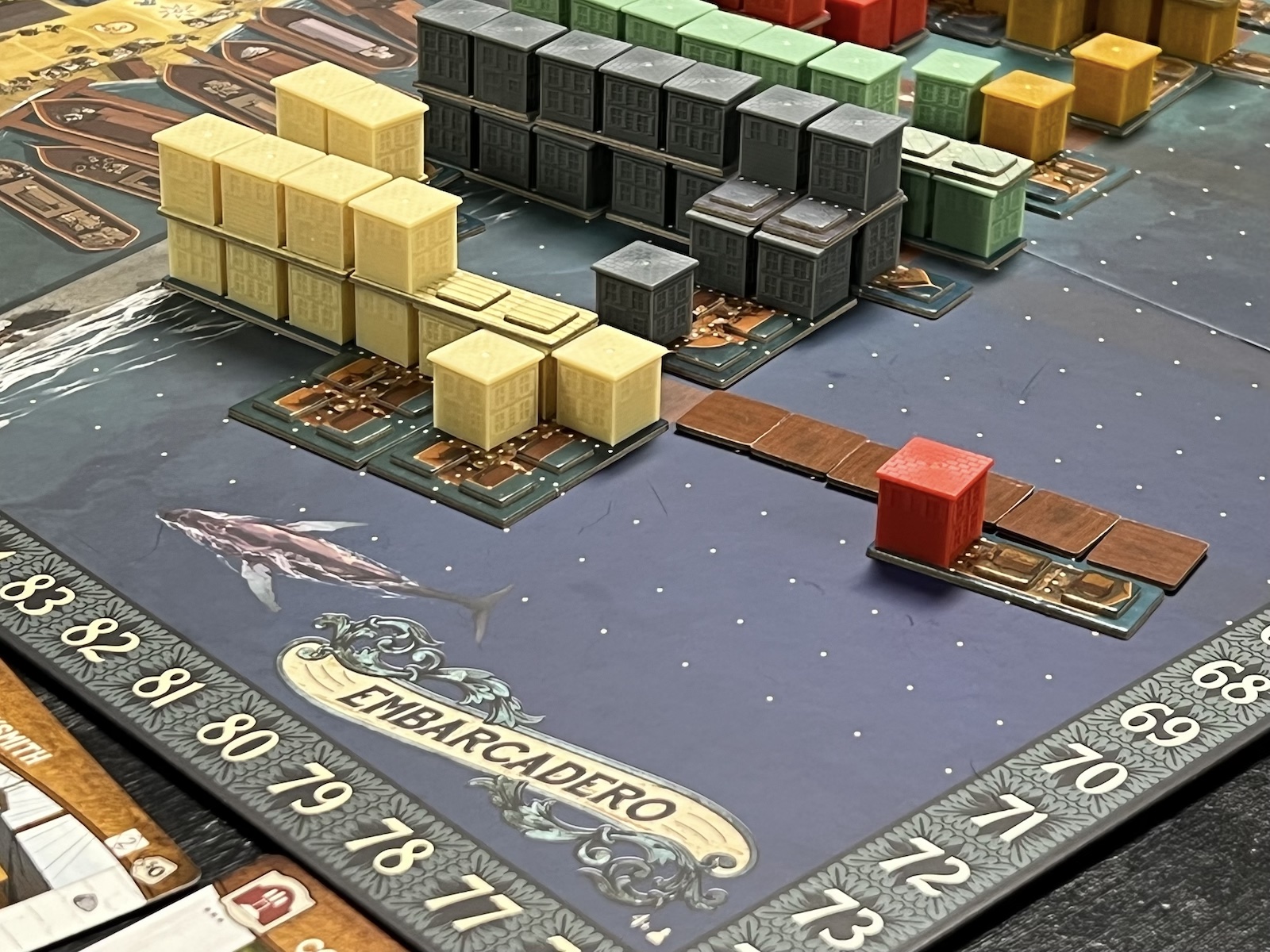 Embarcadero is an engine building game in which you take the role of an entrepreneur from the 1850s trying to gain influence in the city of San Francisco. Each entrepreneur comes with a permanent resource to be used throughout the game along with a basic and advanced side. The advanced side gives a player unique on-going abilities, a one time use ability, and a special end game scoring condition. 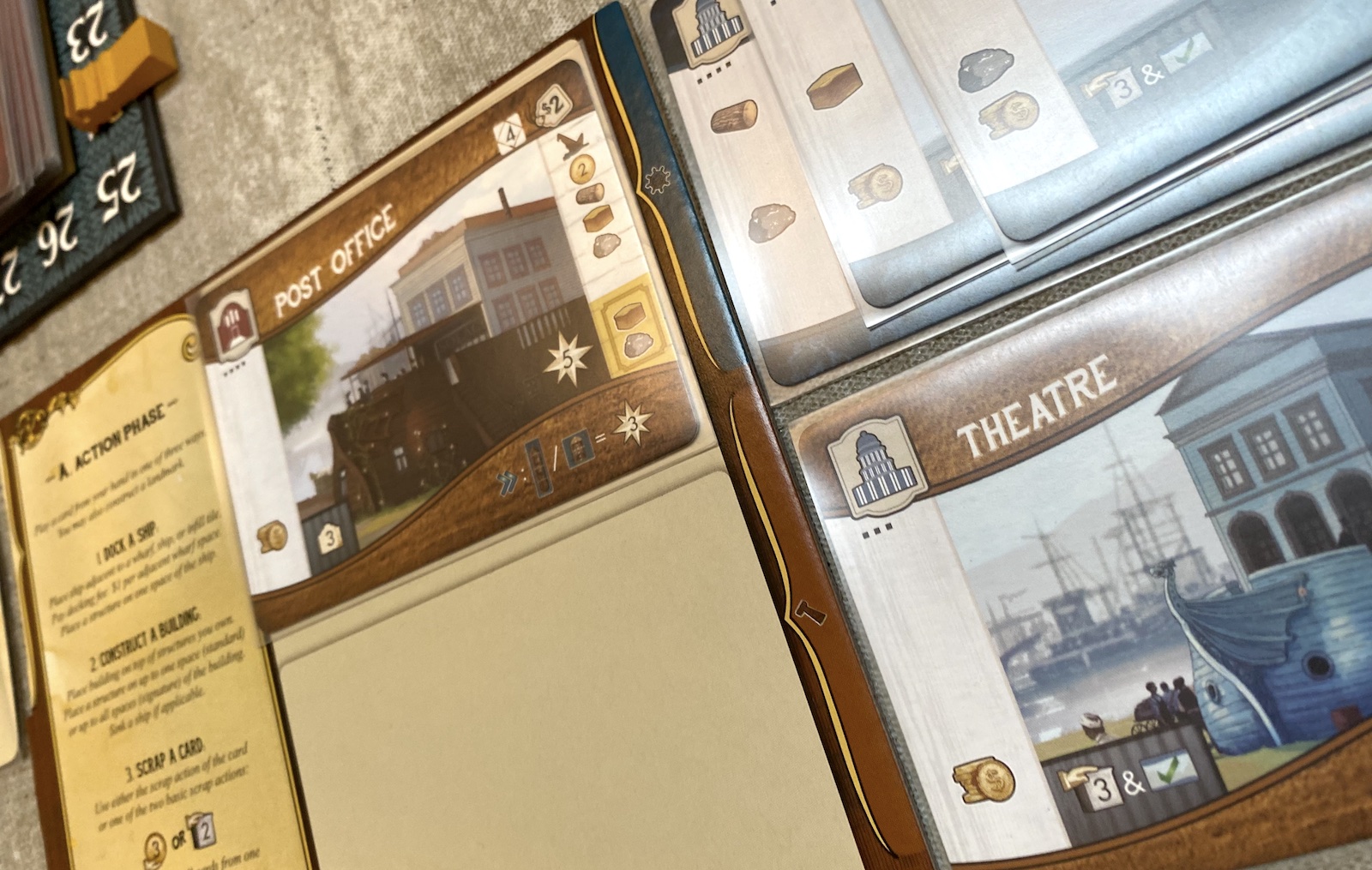 Embarcadero takes place over 3 rounds with each player getting 5 turns per round. Players take actions with a few scoring mechanisms in mind. On a turn, players have the option of securing a vessel, constructing a building, or scrapping cards to gain bonuses. Vessels are the base of your empire and each one provides resources to help construct bigger and better buildings. Sometimes, players must sink vessels to provide a stronger base for bigger buildings. Structures come in the form of colored player cubes and are needed to construct new buildings. Buildings come in a variety of sizes and types and can give players immediate or end of game scoring bonuses based on the level they are constructed and the type of building tag they have. Each card you play adds to your engine giving you raw materials, finished construction products, and even rent from your buildings between rounds. 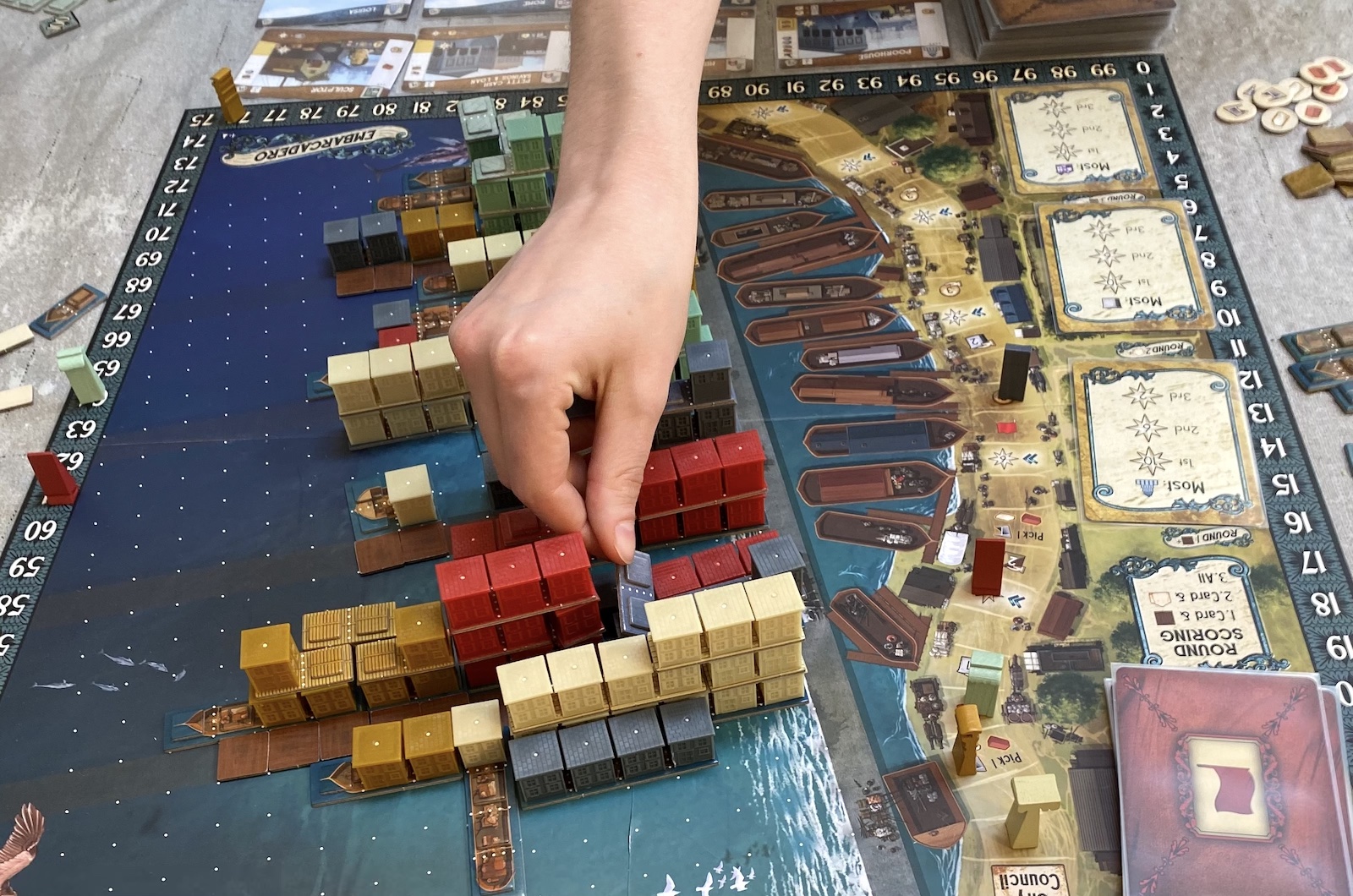 After taking an action, players head to the market to gain new vessels or building plans to use in the current round or save for the next. Players are forced to buy something from the market and they’ll soon find that money is in short supply. This unique mechanic allows players to choose their starting hand for the next round and score some extra points at the end of the game. 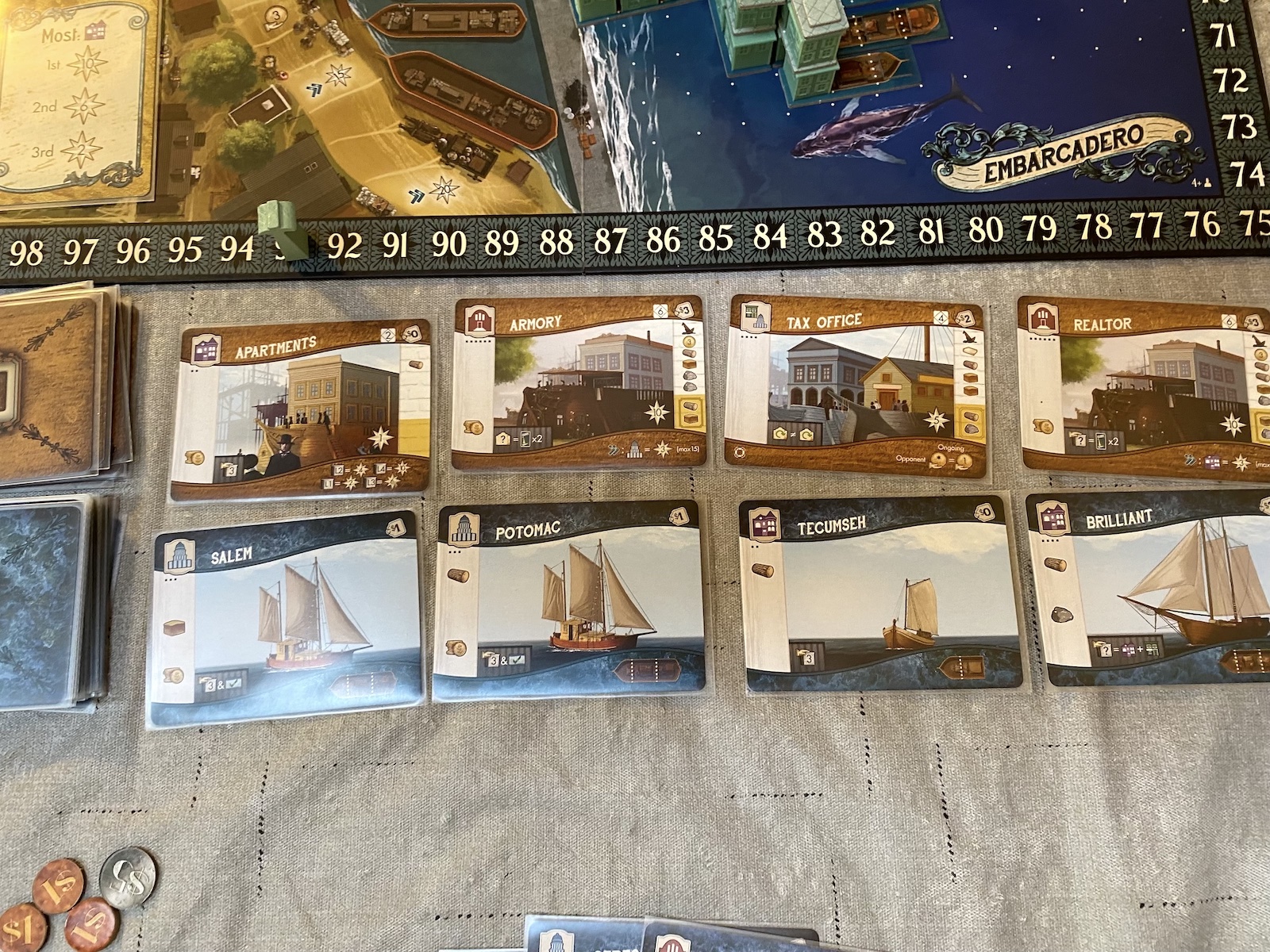 Each round scores a fixed goal using influence on the wharfs and/or progress along the City Council track. Players use the placement of structures and buildings to gain power along the wharfs. The City Council track simulates the influence of politicians and gives players bonuses as they move along the track. During set-up, each round is also given a special scoring condition granting points to players depending on choices made throughout the game. 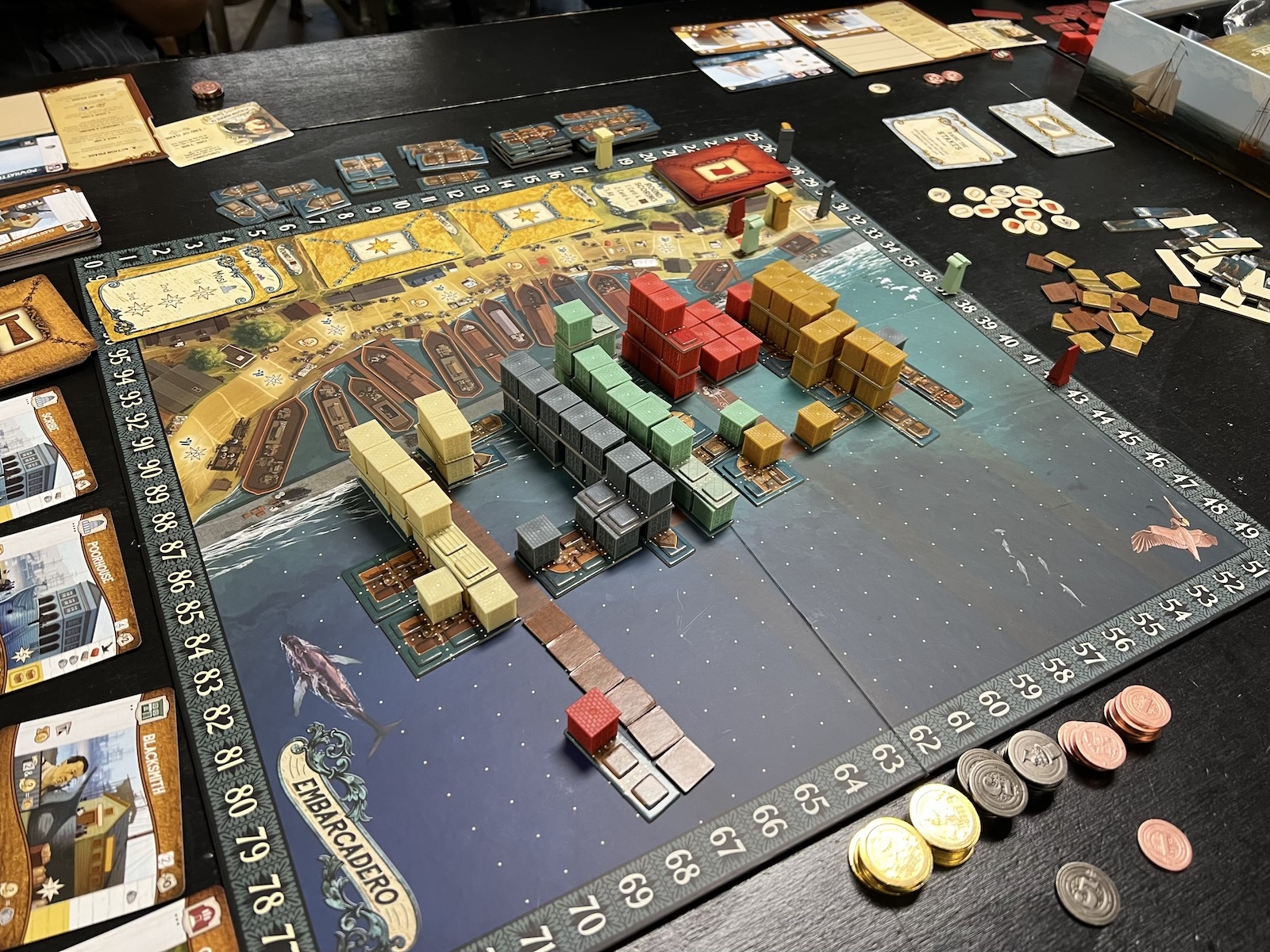 At the end of the game, players score endgame bonuses from their player cards and other cards utilized throughout the game and the player with the most points wins.

The components of the game are one of the best parts about it; each player gets a supply of structures and building tiles to help build their empire. The building and common vessel tiles come in a variety of different sizes. The best addition to these tiles are the notches on the top of each piece, allowing the structure cubes to sit nicely on each of the pieces. On the flip side, the smooth edges on the bottom of the tiles make each level added to your buildings less and less stable. Another nice feature is that each players’ two scoring markers are shaped like unique tools used in construction.The artwork on the quality produced cards and the evolution of boardstate with the multicolored structures growing along the wharves gives this game a beautiful table presence. 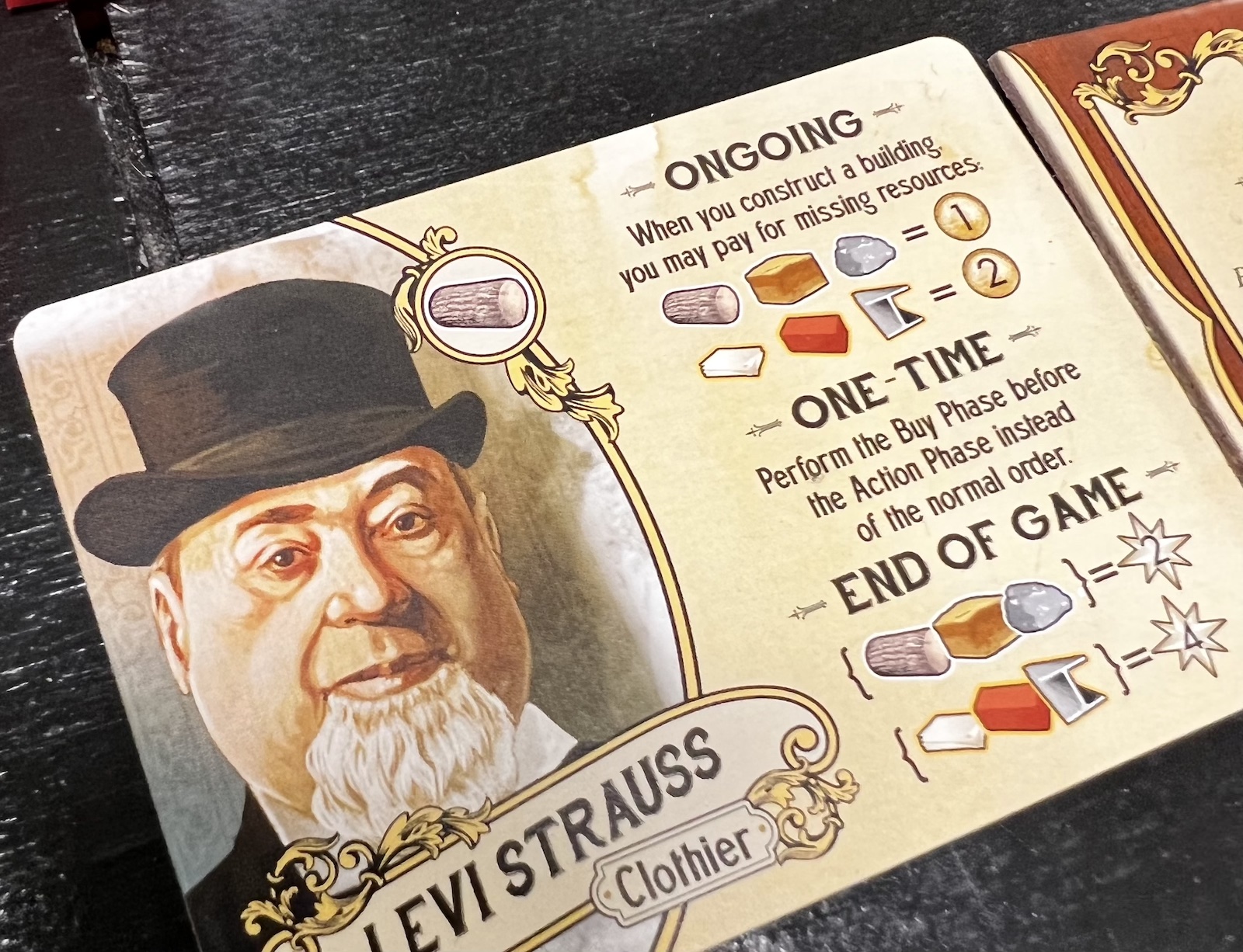 For alternate modes, the game comes with a solo mode and an expansion is available. The solo mode has you going against an NPC and plays similar to the main game. The NPC will take opposing actions forcing the player to be wary of the purchases made during the market round. Players try to beat their previous scores and a variety of achievements are available to conquer. The “Unsinkable” Expansion provides the materials to add a 5th player to the game and a variety of modules to mix and match into the game. Unsinkable Ships provide special bonuses but cannot be sunk to fulfill other building requirements. Entrepreneur Buildings have multiple building tag types with new bonuses but no resources for bonuses. The best part of the expansion are the Events. After the first and second rounds, an Event card is flipped that can change rules for players, give them different opportunities to score points, or even change the cards in their hands. 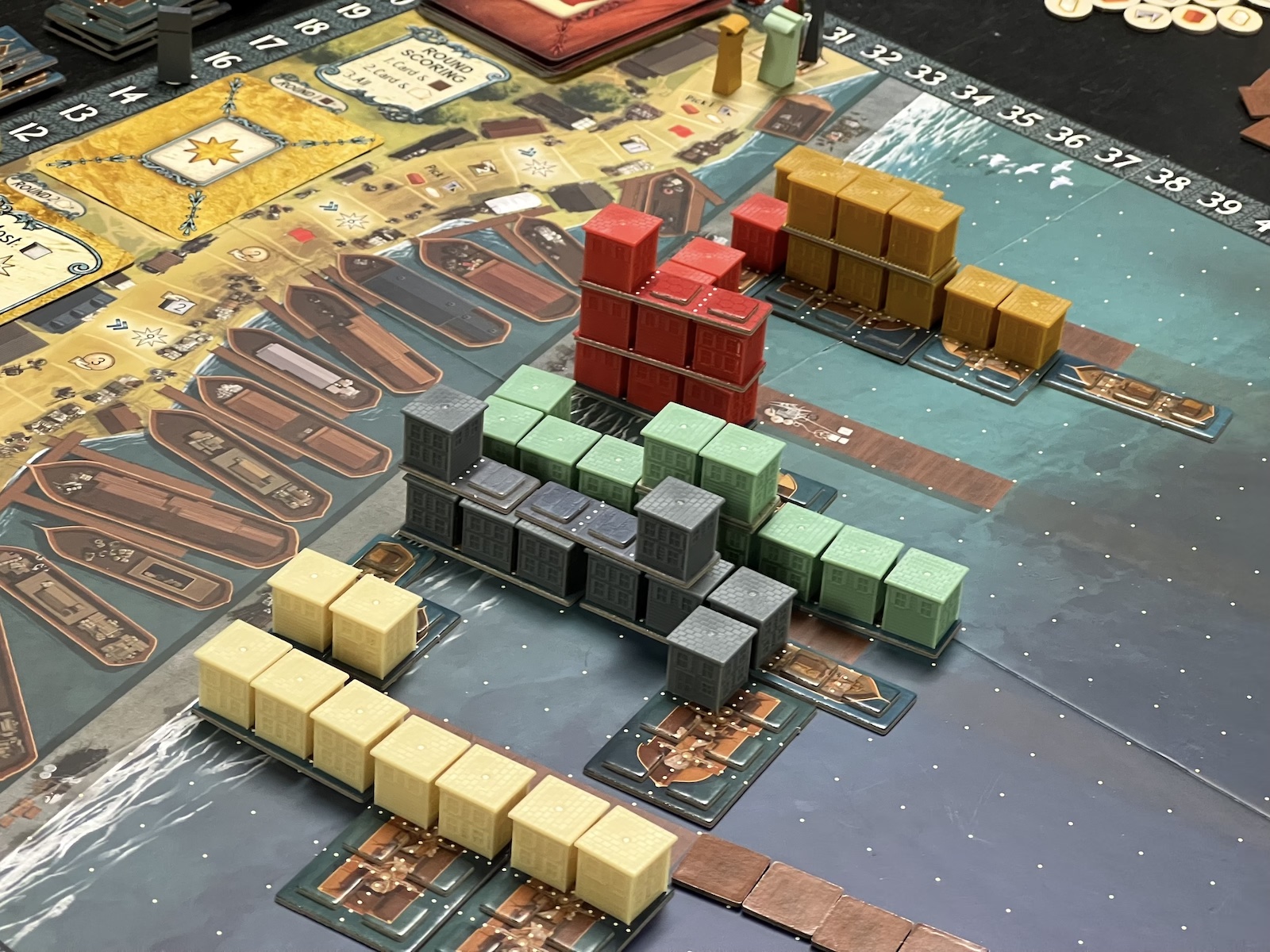 One of the biggest downsides to the game are the set-up and tear down. Like many component heavy games, there seems to be a baggie for everything. While there is a plastic insert in the box, the pieces never seem to go in the same way each time and fitting the expansion in with the base game can make it downright cozy. The other downfall is the fragility of the game board as you get further into the game. A good table bump or someone with shaky hands can send an entire structure tumbling into San Francisco Bay.

At the end of the day, I really enjoyed this game. The gameplay matches the theme and you can truly immerse yourself in building your gold rush empire. The buildings, the boats, the resources, and the artwork all blend beautifully in bringing this game to life. The mechanics are straightforward and there are many different paths to take to gain your points. Do you build on one wharf and assert your dominance? Do you spread yourself along the waterfront and steal points from different wharfs? Or do you go for the political game and move down the City Council track? 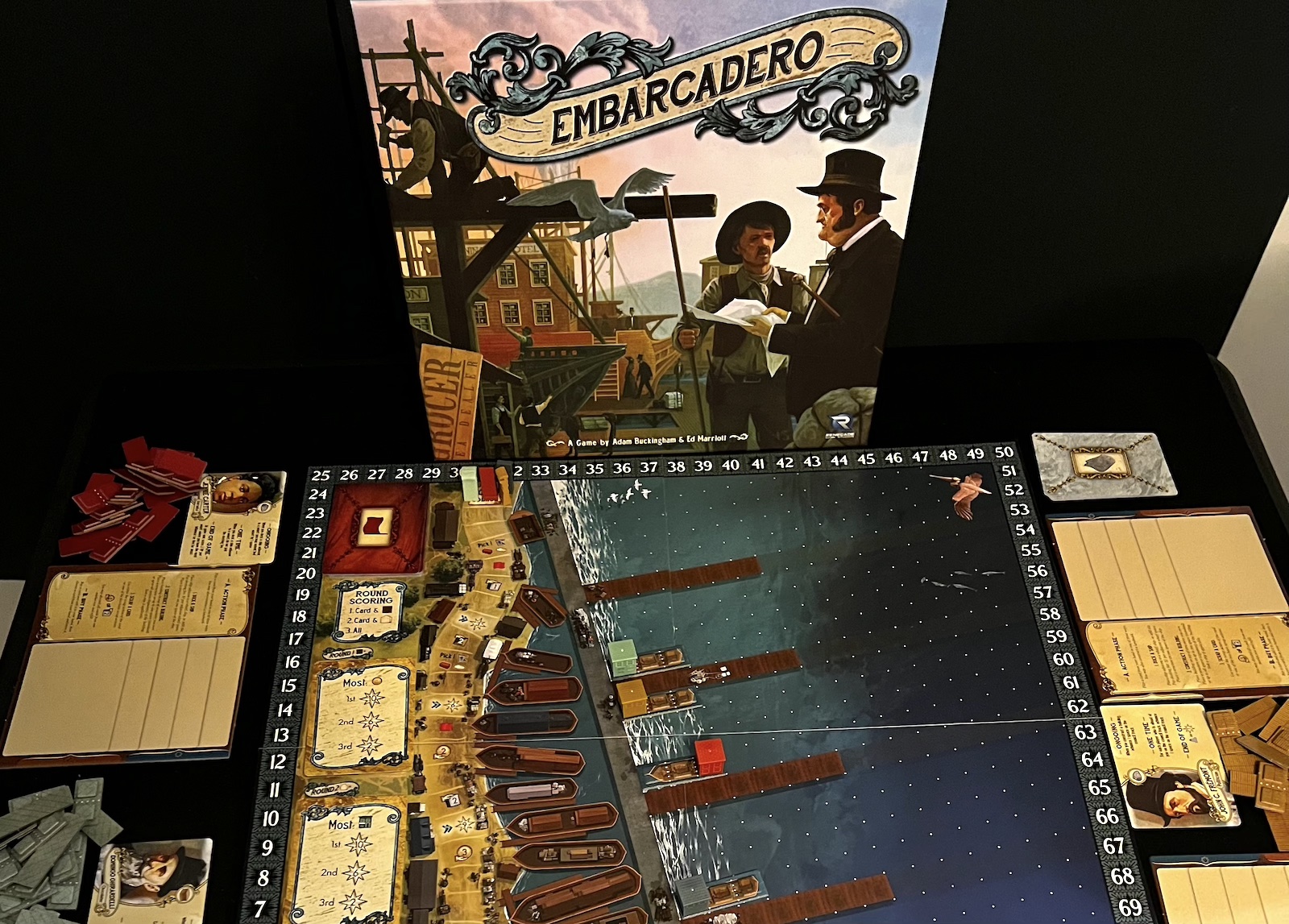 The balance of choices during each turn gives your brain the right amount of burn without pushing you over the top. The gameplay moves fairly quickly as players learn the mechanics and can usually scout out what move they are taking before their turn comes up.

A great thematic take on engine building. Deciding on what and where to build and which points to go after make the game engaging. The three dimension structures and the artwork make this a beautiful game on the table. Straight forward mechanics, variable set-up conditions, and different paths to victory make this a very replayable game.