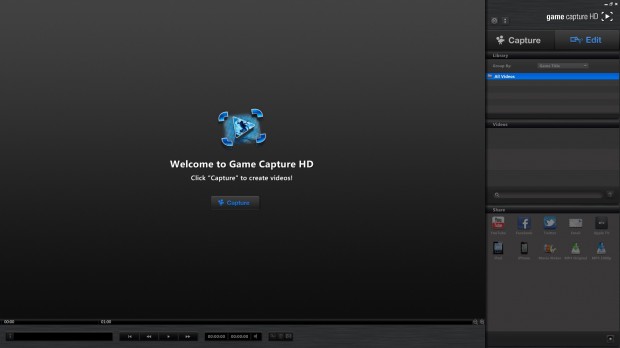 Capture software and hardware has long been a part of the video gaming world. Whether you are writing reviews, capturing your best Halo or Call of Duty match, or shoutcasting your favorite game, getting video from the screen to your PC so you can share it with the world has always been a bit of a hassle. Whether it be a card you have to install in your PC, having to tether to a power cord, or cumbersome software, each of the capture systems on the market have their own quirks. Elgato is looking to simplify all of that with their Game Capture HD.

It is clear that the team at Elgato wanted the Game Capture HD to be the best of all worlds – opening the box there was a plethora of adaptability at my fingertips. The system itself is roughly the size of a deck of cards, and underneath it is a USB, component, HDMI, and a proprietary PS3 cable – not a single power cable to be found.

I cabled up the Game Capture HD to my MSI GT70 and immediately it asked to install drivers, as one would expect. Unfortunately it hung there and never installed the drivers. A quick boot to safe mode to remove the device from Device Manager and to re-install it solved the problem, but this seemed more like a hiccup on my machine than with the Elgato. After that fresh reboot I was able to see the size of the tiny software footprint – just 31mb. Snapping a pair of HDMI cables into the rig sent me off to the races.

The software is simplicity itself. Rather than having to learn something complicated like PowerDirector or After Effects from the Adobe suite, the tools you need to slice and dice your captured footage is right at your fingertips. Three quarters of the screen is consumed by a full-resolution preview of your captured footage, while an intuitive dock of icons nestle to the right. Sharing is as simple as clicking the icon that represents the destination for your video – a refreshingly easy approach that alleviates the need for converting your end product yet again to get it onto various outlets like YouTube or iPad.

The software encoding process maintains its simplicity, masking the most complex of process behind just a few simple clicks. Starting with the most simple and easy transition possible I selected mp4 1080p for my output options. After just 24 seconds the 11 minute 1080p capture was converted from the native .ts format to a more portable and universal .mp4. Compression is minimal in the translation, dropping the resultant 1.2GB file to 960mb while leaving visual fidelity intact. Here’s where the rubber meets the road – let’s look at the captured result.

Obviously the power of the PlayStation 4 is capable of rendering beautiful scenery at 60fps and at 1080p resolution. Thus far no capture systems have been able to capture that resolution on any system other than the Black Magic card which requires installation into a PC with a very strict motherboard / chipset requirements. With some trickery outside the scope of this review we were able to capture PS4 footage via the Elgato showing Delsin Rowe’s adventures in Seattle in all of it’s high resolution glory. (You normally have to use the included cable for 1080i, or you can capture via HDMI at 720p on the PS3, but a recent patch has allowed players to turn off HDCP and capture at 1080p via HDMI on the PS4) The Xbox 360 , Xbox One, and Wii U are pure simplicity itself, only requiring that you plug in HDMI cables to capture at 1080p or 720p as supported by the game itself. No capture system of this type has ever been this elegant or straightforward. Check out our video review for inFAMOUS: Second Son below – be sure to click the HD button and run it full screen:

As you can see, there are minor artifacts introduced when uploaded and re-encoded by a video hosting site, but I can assure you that the source video is absolutely flawless. Put simply, what you see on the screen is what you’ll see in the resulting capture. In addition to 1080p, the Elgato Game Capture HD also supports 720p, 576p, 480p, 288p and 240p, though I’m not sure what scenario would cause you to record at less than 480p other than recording retro games, but with the Elgato Game Capture HD it’s possible.

Obviously we recorded the inFAMOUS: Second Son footage with the express idea of editing it for a review, but what if you are the type that enjoys livestreaming? The Elgato Game Capture HD supports one-click sharing to YouTube and Twitch. You can also share to iOS, Apple TV, Windows Movie Maker, email, Twitter, and Facebook, but let’s be honest – it’s unlikely that you’ll share to those things. I can say that it streams as easily as it states on the box – I was able to send footage with a single tap of the mouse.

Normally I connect a capture rig when I’m explicitly planning to record for a review. There is a compelling reason to leave the Elgato Game Capture HD connected and running in the background all of the time though – it automatically caches the last 10 minutes of your play session. That crazy shot you just made in Titanfall? The awesome comeback you just pulled off in Madden? The final blow against Diablo in Diablo III on console? It’s all preserved for you courtesy of “Flashback Recording”, ready for you to snap it up from the retroactive recording. There’s no reason to lose those epic moments again.

I do have to take a moment and tip my hat to the visual editor in the Elgato software. It truly is simplicity itself, giving you the ability to earmark sections with notes to keep track of your footage, trim, move, and delete footage with ease, and export the whole thing with two clicks. For more advanced options you’ll have to invest in more powerful editing software, but for the vast majority of folks doing Let’s Play coverage it’s more than sufficient. If you found software like the Adobe suite daunting, you’ll find this to be a breath of fresh air.

Let’s suppose you are comfortable doing video capture because you like to narrate or shoutcast your own footage. Well, the Elgato Game Capture HD has you covered for this as well. Any microphone you can plug into your PC will allow you to record voice over the top of your video track or streamed video via the Live Commentary feature. Once again Elgato makes this easy, automatically lowering the volume of the capture when you speak – something I have to do by hand when I use more complicated software. The best part? Your livestream is captured (if you want) in the background for later use.

The Xbox One and PlayStation 4 have recently introduced some of these capture and streaming mechanisms into their operating systems. This has enabled streaming to Twitch, some shoutcasting options, and other social sharing options. While these are a step in the right direction, there is still a great deal of restriction and control placed over what you can and cannot capture. Some companies will force a watermark of their corporate logo into the corner of your capture, both companies are still tinkering with their resolutions and framerate options for streaming, and they are both rather clunky in their processes. With the Elgato I get exactly what I want to capture in its raw form at any resolution I want and without restrictions. Having tasted freedom, I can’t go back.

While there may be cheaper capture systems out there, the Elgato Game Capture HD is the easiest to use by a very wide margin, and at a $179 price point it’s very easy to recommend. The portability of the small form factor is perfect for travel, and the lack of a power cord makes it even easier to use. The included software will work for the vast majority of people, enabling shoutcasting, instant streaming to Twitch or YouTube, and more. Put simply it is the best consumer grade game capture rig on the market, hands down.