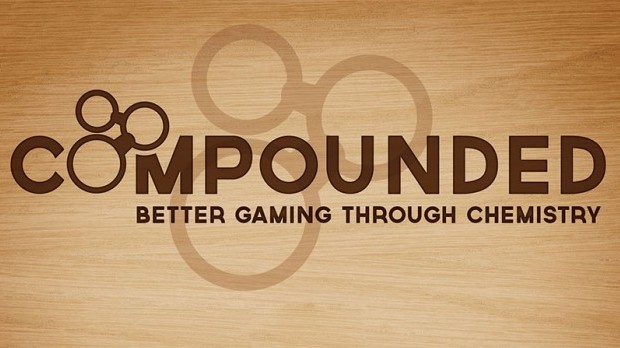 Mr. Stott was my High School chemistry teacher. He introduced me to the subtle science behind electrostatic forces, the vastness of the periodic table, and why I should care about a mole. I loved chemistry so much that I took it again as an AP class. There is something elegant about the way elements interact with each other to form larger, complex structures. While some people slept through chemistry and others flourished, Compounded lets you be a chemist anyway. For Science!

In Compounded, each player plays as a chemist in a shared lab trying to complete the biggest and best compounds, all while improving their own lab space. Players will be competing for elements, staking claim on compounds, and attempting to quell dangerous lab accidents.

Each player has their own lab space in front of them that keeps track of their progress in various experiments. This space also holds elements from phase to phase. Depending on the level of a given experiment the player will get some sort of benefit in a given phase. The focus of the game is the compound space in the middle of the table. Here is where the players will work on, and eventually complete, compounds. Off to the side an aptly selected periodic table is used to keep score.

Each round is made up of four phases that happen sequentially: Discovery, Study, Experiment and Lab. In the discovery phase players will draw elements out of a bag up to the number of their discovery/liquid experiment level (two to five elements). After everyone has drawn their elements, players are free to trade with each other. Next up is the study phase. In this phase players will be placing claim markers on elements (one to three), marking them as their own. A claim marker simply prevents other players from scoring a given element. After this is the experiment phase. Players can place elements (two to five) from their lab space on to any element. If they complete an unclaimed element, they can place a temporary claim marker to score the compound later.

The last phase of the round, the lab phase, is used to score complete compounds, refill the compound pool, and handle lab fires. When resolving a complete compound a few things will happen, mostly benefiting the player who completed the compound. Firstly, the player will receive points. Then, depending on the compound, the player will increase one of their experiments. Lastly, there may be labgear to be claimed or an triggered event to resolve. After all of the completed compounds are resolved and removed from the pool, more compounds are added. In the deck there are also lab fire cards which cause flammable compounds to catch fire and possibly explode. When a compound explodes, whatever elements were on the compound card are moved to adjacent compounds, and the exploded card will be discarded, yielding no points.

The game ends when one of two events occur. Either one player gains 50 points or the compound deck runs out of compounds. At this point which ever scientist has the most points is declared the best chemist and wins.

Dice Hate Me spared no expense on this Kickstarter. All of the components feel and look superb. The art style is subtle and effective, and I especially enjoy how accurate the compound cards are. Each card is laid out as the chemical compound would be, complete with covalent bonding. With all of the elements out on the table, the game drips of the ‘come play me’ vibe.

The rules are ok. They cover everything you need to know, but in a less-than-streamlined way. Even during third and fourth plays, we were referring to the rule book and having a hard time finding an answer. That being said, the game is straightforward to teach.

Game play seems to be best right around three players. The two player game uses a variant that handles trading, and while playable, has a different feel from the full game. When playing with five players things can bog down as there is nothing to do during other players turn since the player interaction is fairly low. Game play tends to be fairly close to the one hour mark.

Compounded takes something that some people find boring and makes it enjoyable. While I am not a chemist by profession, I have taken my fair share of Chemistry courses and the game stays true to science. All of the compounds are actual compounds, made up of the actual elements in the game. This factual relevance is extended further into the distribution of the elements in the game. Hydrogen is much more prevalent than the rest, while silicon is the rarest . The game rarity scale matches (almost in magnitude as well) actual element abundance. It is apparent that Darrell Louder took some time to research what he was dealing with, even going as far as to design the game around nature. This is one of those games where you may actually learn something while playing. 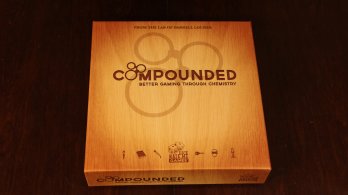 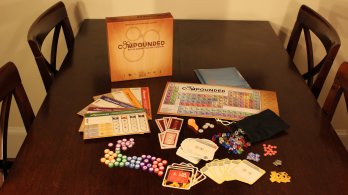 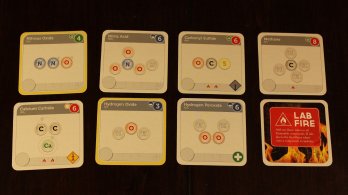 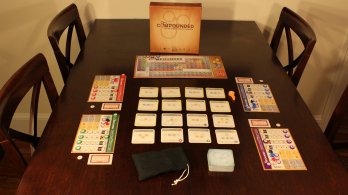 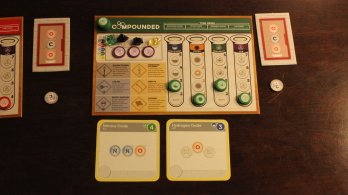 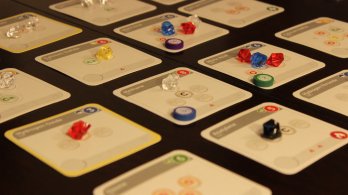 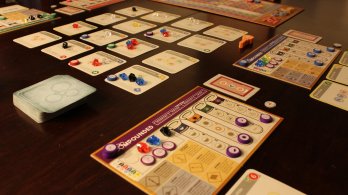 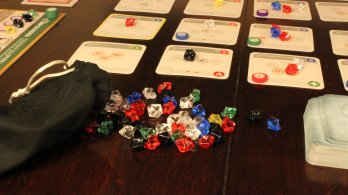 The link between experiment level and phase perk is intuitive and interesting. With the lab space in front of you, it is obvious to see the link between each of the experiment levels and the given phase they affect. This balance, or lack of balance, is a major driving force of the game. If you level up your ability to draw elements quicker than you can play them, you set yourself up to be forced to discard elements that you would otherwise like to keep.

As with other games with trading tacked on, Compounded suffers from a lack of incentive to trade. There is a Catch-22 in trading. It will help you, but it will roughly help your opponent just as much. This means that when a trade is offered it tends to be a push for those involved, and just bad for everyone else. As there is no other incentive, and there is no convolution as to what the traded elements are worth to a player, the trading aspect tends to take away from the game. Generally no one wants to trade, but people still try. This ends up being wasted time.

The game suffers from a lack of negative feedback, or a catch up mechanism. In general, those who complete an element in the first two rounds will win. The issue is that when completing compounds (the whole point of the game) players are rewarded with experiment points, allowing them to upgrade their lab. This upgrade allows them to play more efficiently and complete their next compound faster, thus gaining more perks and points. If you are one of the unlucky players to complete your first element last, you are pitted up against players who have far more ability than you, and they have more points to top it off. It is very hard to ‘catch up’ to a runaway leader in the game.

In proper Euro-style, there is very little direct player interaction. Aside from the aforementioned trading, players compete to place claim markers and in some games players may obtain Bunsen burners. Bunsen burners allow a player to add a flame token to any element that does not already have one. This means that they can increase the chance of a compound exploding, but can never actually cause an explosion. For some players, the lack of player interaction may be a positive aspect, but it does not help with the runaway leader issue. There is little you can do to keep another player from scoring a compound.

Compounded does offer good game play choices during the whole game. The biggest choice being what compounds to focus on. The game allows players to move influence tokens and to play elements on non-controlled elements. This means that claim markers can be temporary. This will lead to a choice every turn as to how to best focus.

Compounded looks beautiful, there is no doubt about that. The theme is unique and engaging. The rules are straightforward and accessible. Compounded feels like it should be a home run. However, the game play leaves something to be desired. Don't get me wrong, it is an enjoyable game. Yet after playing a few times there is a sense that something is missing. The overwhelming feeling being: 'meh.' Not bad, not amazing. I highly suggest at least trying Compounded, but I don't think it will be for everyone.