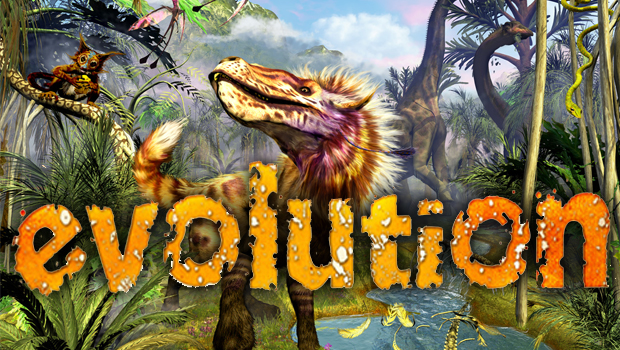 I did not realize how quiet it had gotten. Grass that normally sustained me and my herd became terrifying as it clouded my vision. Leaves rustled behind me. I thought it was the wind, but in actuality it was my eventual attacker… or I should say attackers as they have just started hunting in packs. I was told that my horns were put there to protect me, but then again, the shadows moving in my periphery were much larger than I had remembered. In the end I ended up failing my herd, and really the entirety of my ancestors. My death proved that they were the fittest. This is Evolution.

We mortals have a hard time witnessing and participating in the glacially-paced evolutionary process, so now we have a way to act it out in tabletop form. Evolution is a game that forces players to manage a genetic arms race for food. Have you ever wanted to see what would happen if a brontosaurus burrowed into the ground for protection, or if armored wolves would ever survive? That is what Evolution is all about.

This is an upcoming game that is being Kickstarted by North Star games. The copy that I was playing with was a prototype. Keep in mind all of the pictures involved are prototype quality components or promotional things from North Star. Keep your eyes open for their Kickstarter starting on Monday May 5th.

Each player will be competing to make the most fit species, or the most fit collection of species. Each round, every species will need to eat enough food to support its own population. If a species is not able to feed all of its own members, some will die off. At the end of the game the player who has eaten the most food over the course of the game is determined to have the fittest species and is declared the winner.

Each round players draw cards proportional to the number of species they control. Players then discard one card which will determine the size of the feeding pool at the end of the round. The cards all offer various traits that can be given to a species, granting them special abilities and protection from others. Cards may be used for their trait, or may be discarded to increase the size or population of a particular species. When a card is played as a trait, it is played face down. Once all players have performed their actions, all new traits are flipped up.

At the end of each round, players will attempt to feed their species. Normally they can eat plants from the plant pool, but some species will evolve with a taste for blood. Carnivores must attack other species on the table to eat, as opposed to taking from the plant pool. If a species is unable to collect enough food, their population will drop to match the food level collected. When either all of the food is devoured, or all of the species are fully fed, the next round starts. These rounds continue until all of the cards have been drawn from the deck, when final scoring takes place.

The copy of Evolution I was playing with was a prototype, so I cannot say too much to the artwork or components of the game. The draft rules that I was using were very clear and straightforward. Each trait card has a section describing what is does, and the implications with other traits. Teaching the game is straightforward as the few mechanics are easy to understand.

Games generally last for 30 to 60 minutes, and take about the same amount of time regardless of the number of players. This is largely due to the timing mechanic of the deck running out. There is a significant amount of player interaction so the feel of the game can change quite a bit with non aggressive players.

Evolution? Can a game possibly envelop such a grand theory? Yes, yes it can. The actions and reactions to various strategies emulates the organic flow of adapting populations. The turn after someone plays a carnivore trait, everyone else is playing defensive traits to become less of a target. When food gets scarce, the traits that allow for efficient food collection flourish. More so than most, Evolution gives a nicely flowing story arc. Species come and go, things change and grow. If you are able to keep your starting species alive until the end of the game, it will in no way resemble what it was like at the beginning. I can imagine this being a great educational tool for middle and high school biology classes.

For the game to be so reactive and fluid, there needs to be diversity in the traits. After a few plays it is easy to understand how the traits interact with each other. However, during the first few plays it is hard to get a handle on the interaction. This leads to some frustration when teaching the game, especially when playing with someone who understands the game. Evolution is a game that almost requires the experience of a previous play through to really understand and enjoy.

Aiding in Evolution’s simplicity, the use of cards for population growth and body size accentuates the randomness, but in a good way. Instead of making or breaking a player’s strategy, the trait cards allow for interesting combinations while still providing some generic benefit. There is randomness in what cards you will get, but not randomness in the likelihood of you winning. You pass through enough cards during the game that if you really want a pack hunting, burrowing carnivore you can have it.

Evolution encourages diverse strategy, along with being agile in your plan. I recently won my first game of Tzolk’in just because I did the strategy that no one else was trying. Because I had an unhindered path, I crushed everyone else. I didn’t really feel like I deserved it though, because I didn’t really know what I was doing. As you play Evolution, the winning strategy seems to be to not have one carved in stone. The winning player is the person who molds their species into the most efficient at any given moment. If everyone is trying to be super efficient in collecting plant food, becoming a carnivore not only removes yourself from the race, but gives access to a plentiful food source. If you are getting frustrated that you are always being attacked, don’t increase your body size, stay small and predators might pass you up for a bigger meal. Evolution ends up being this giant elegant balancing game, both with the food pool and your opponents competition for that food.

This may be premature, but I am already excited about the expansions that North Star could work in to Evolution. All that would be needed are additional trait cards and the game would feel completely different.

Evolution is a rare gem, taking notes from the theme and folding them in to the mechanics of the game. It is very easy to let your imagination run wild while playing. I would highly recommend this as a casual game with depth for families and gamers. With an abundance of player interaction, and clean, tight game play it is worth checking out.