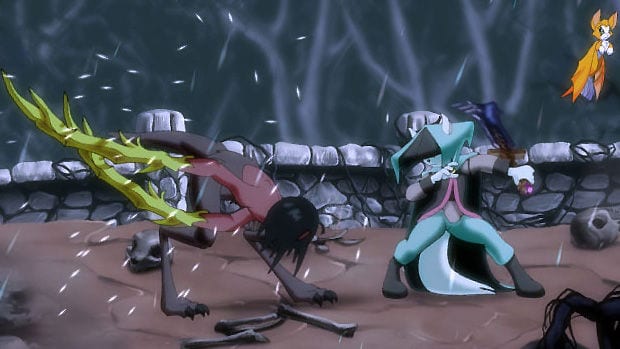 This was a rather lackluster year for Xbox’s annual Summer of Arcade, with no real standout entry that demanded to be played. Previous years have seen such instant classics as Bastion, Shadow Complex, Limbo, or ‘Splosion Man, and this year’s entries didn’t even come close. As the capstone to this year’s summer lineup, Dust: An Elysian Tail, developed by Humble Hearts (essentially the work of one Dean Dodrill, who was responsible for the art and programming of the game), had some pretty big shoes to fill. Can it rise above the ashes of mediocrity and bring about an exciting close for the yearly promotion, or will it flounder, and ultimately drown along with the other decent to below average games on offer?

Dust: An Elysian Tail puts you in the role of the titular character, along with your talking sword Ahrah and flying sidekick Fidget. You are tasked with defeating General Gaius, a man (or dog/fox-thing) hell bent on subjugating and destroying a race known as the Moonbloods, leaving a trail of destruction in his wake. I won’t spoil any more of the story, but it twists and turns somewhat predictably, yet still remains interesting due to some good writing and voice work. The script toes the line between taking itself seriously and mocking its own game-like nature; it knows very much that it’s a video game, with fourth-wall-breaking references to mashing buttons, a secret that harkens back to Castlevania II, and even a healing item called a “mysterious wall chicken” that drops from destructible walls. While in lesser hands this would seem cheesy or sophomoric, it’s both an interesting yarn, as well as legitimately funny. The voice acting enhances the story with a good cast of characters; even Fidget, who I first found annoying due to her shrill cartoon squealing, began to grow on me. The music is fantastic as well, evoking memories of times when I played Castlevania: Symphony of the Night ages ago. This game was clearly a labor of love for all of those involved.

[singlepic id=8824 w=320 h=240 float=left]The game is truly a sight to behold, with some of the most fluid animations and beautiful scenery I’ve seen in a game. With an art style similar to games like Muramasa: The Demon Blade or Odin Sphere, each level looks handcrafted, and each area has its own unique scenery that set them apart from other levels. You’ll traverse forests, navigate a graveyard, scale icy mountains, or plumb the depths of a volcano, each area exploding with color. Dust himself moves like a cartoon, jumping, flipping, deftly slinging combos, with nothing ever looking awkward or stilted. It really must be seen to believed, and I defy anyone who takes even a cursory glance at the demo to walk away unimpressed.

The graphics are not entirely perfect, however. Most of the ancillary characters don’t move with the same grace that Dust does, and the animated cutscenes, though few, tend to look more like low-budget flash cartoons than actual animated sequences. Some might also find the style of the game a bit too “anime-esque” for their tastes. All of the characters are anime-inspired anthropomorphized creatures, with walking, talking foxes, dogs, and whatever Fidget is. I can see this turning off some people (and, while I do agree that it is a gorgeous game, I’m not the biggest fan of the character design myself), but the talking animals shouldn’t detract you from playing the game, as while the design isn’t quite up to the level of games like Shadow Complex or Super Metroid, it’s incredibly fun in its own right.

[singlepic id=8825 w=320 h=240 float=right]Dust is essentially a non-linear two-dimensional action game with puzzle elements, what is colloquially referred to as a “Metroid-vania” game, as it takes its cues from games like Super Metroid and Castlevania: Symphony of the night. You have general quests to follow, but the levels themselves don’t follow the typical “move from left to right” most 2D platformers follow. You’ll find yourself following your map in all directions to your goal, noting secrets just outside your grasp until you procure the right item or ability to reach them. As far as “Metroid-vania” games go, this one is top notch, with a complex, though not overly convoluted map, filled to the brim with secret treasures and items (you’ll even find some fun little easter eggs from other XBLA titles hidden in there), and there’s always a new ability or area just around the corner, waiting to be uncovered.

As you roam the lands, picking up quests and solving puzzles, you’ll be involved in copious amounts of combat. You’ll use your sword, along with Fidget’s magic, to slay your foes. You are equipped with a basic sword slash, along with the Dust Storm ability, which allows you to spin your sword in the air, either stationary on the ground, or twirling through the air. The Dust Storm ability, when used in conjunction with Fidget’s magic, combines to make your attacks even more powerful. This allows some jaw-dropping effects, which, coupled with the dazzling animations, keeps combat feeling fresh and exciting, even while the combat starts to feel repetitive after a while.

[singlepic id=8826 w=320 h=240 float=left]And that’s the main problem with the game: it ends up being far too easy. Though the game starts out difficult, with enemies that can kill in one hit if you don’t counter properly, gaining a few levels and equipping some better gear ends up turning the end-game into a cakewalk. Enemies drop gold and healing items fairly regularly as well, so after a while, death never really becomes an issue. I went from dying on a pretty consistent basis to mopping up the floor with my enemies within a few hours’ time. Granted, by the time you get near the end of a game, your abilities should make you feel like a badass, but the enemies should also scale with said abilities to provide a challenge. The bosses also tend to be rather uninteresting fights, basically reducing combat to spamming the Dust Storm and magic buttons while mashing on the healing button, becoming more a battle of attrition than anything involving strategy or timing. Additional difficulty levels mitigate the damage somewhat, but on normal difficulty, expect the game to get much easier, rather than harder, as you play.

It seems kind of unfair to put the entire success of this year’s Summer of Arcade all on the shoulders of one title, especially considering how uninspired this year’s offerings were (save for Hybrid). While not perfect, Dust: An Elysian tail is a solid 10-15 hour action game with impressive visuals, a huge map to delve into, and tons of secrets to uncover. Even with a lack of difficulty, fans of the genre, and even fans of action games in general, will find plenty to love here. Not too shabby for a game made by one guy.