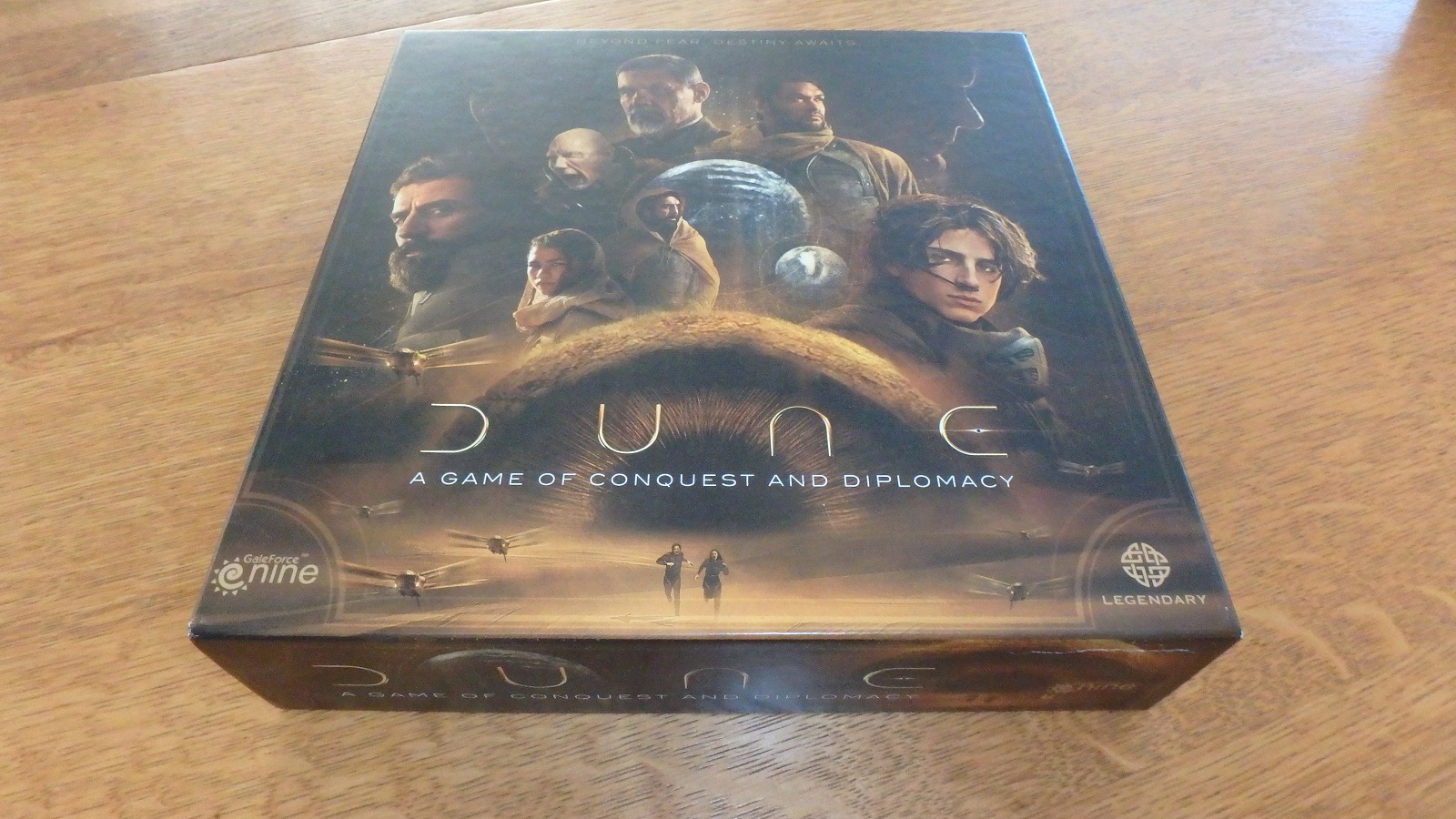 Back in 2017, Fantasy Flight Games published Battle for Rokugan, which took the secret order mechanic from the popular Game of Thrones board game and fabricated an area control game around it. While I was initially excited for a streamlined version of one of my favorite board games that I could play in around an hour, it became readily apparent that, by removing mechanics that made table talk and negotiation essential and adding more luck into the game, the end result was more of its own thing. Which isn’t to say I don’t enjoy Battle for Rokugan, it’s a good game for what it is, but it definitely fails to measure up to the experience that Game of Thrones is. I obviously didn’t learn my lesson, cause I charged right in to Dune: A Game of Conquest and Diplomacy (which I will refer to as “Movie” Dune from here on) hoping that the original designers of Dune had crammed the experience into a tighter package.

For the uninitiated, the original Dune board game just got a reprint from publisher Gale Force Nine in 2019, and has the opportunity to run from an hour to a day, in the vein of Diplomacy, Game of Thrones, and Twilight Imperium. Similarly, a game of Dune will feature heavy amounts of table talk, negotiation, backroom deals, and backstabbing. Also similarly, a game of Dune will potentially feature players being heavily punished for mistakes or simply being the target of larger powers, sitting around the table for hours feeling like they’ve already been eliminated from contention, nursing a slow rebuild while other players take part in epic conquests and gambits. All of this is to say, big pappa Dune is by no means an accessible game for wide audiences, which makes the creation of a similar, but lighter game to tie in with the recent movie make a whole lot of sense. 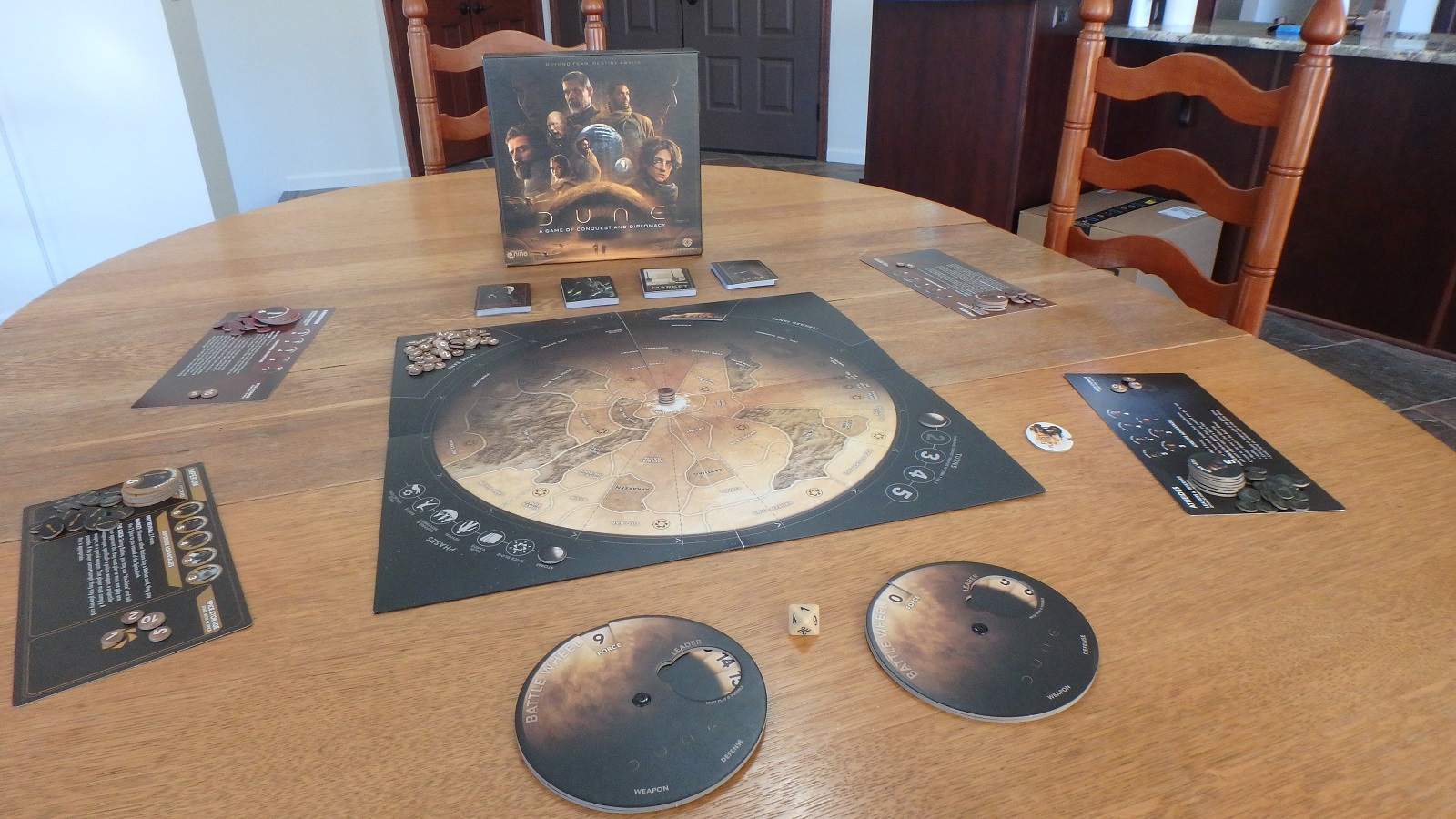 A lot of the mechanics of classic Dune are still here: a sandstorm circles around the board constantly changing the landscape of which areas are and aren’t safe, everything revolves around spice acquisition, and combat is a harsh meat grinder. However, there are a lot of tweaks here and there, and some pure and simple overhauls. First off, probably the most impactful change is how plentiful spice is in this version. Combined with the removal of troop revival limits and more forgiving leader revive mechanics, losses in combat sting far less. Combined with the reworking of the treachery card auction into separate three free battle cards and up to three market cards which cost two each off the top of the market deck, most players are going to be entering the shipping and movement phase with the equivalent of six treachery cards, and with much less knowledge of who has, and can do, what. 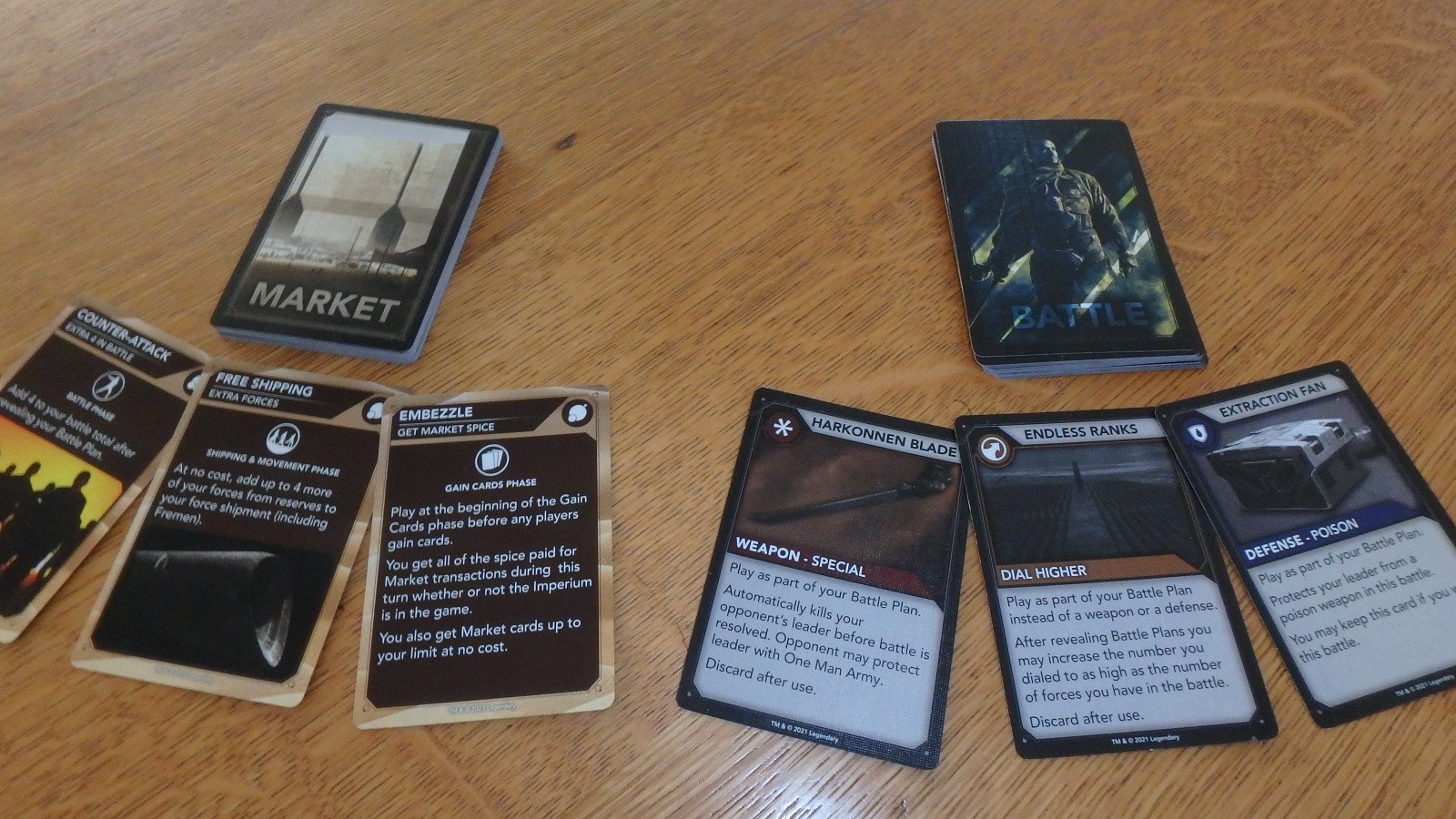 And then there’s the change to shipping and movement, where shipping is cheaper and every player can move a force up to three regions, an ability referred to as ornithopters in classic Dune, which is only available to players with control of Arrakeen or Carthag. Accompanied by the new five-round limit and removal of alliances, these changes obviously serve to make a game of movie Dune playable within an hour or so between four players, instead of the unknowable length of six player classic Dune. Make no mistake, Gale Force Nine unquestionably succeeded in making a Dune game that plays in a much more reasonable time frame while requiring two fewer players, and because of that, Movie Dune will definitely be hitting many more tables much more frequently than classic Dune has any chance of. And while that should definitely be celebrated, it’s obvious the changes made to make Movie Dune fundamentally alter how it is played compared to classic Dune, and as such, it fails to achieve the highs and lows that the classic offers.

My problem is, unless you’re just absolutely dedicated to the Dune theme, I’m not entirely sure where this game fits in a collection. By failing to live up to the experience of its big brother, movie Dune has to fight with other three to four player area control games for shelf space, and I’m honestly really murky on if it beats out the stiff competition there. See, it exists in this strange middle ground, where it has way too much rules heft to fit in with lighter, more simple fare, but it also has too short of a playtime and too few windows of player agency to feel chunky and filling. I’m left wishing that I lived in the timeline where the designers chose to abstract out the dated-feeling “dudes-on-a-map” portion, and kept the uneasy alliances and secret plans instead, because I really felt like this features the most complex parts of the classic game, but not necessarily the best ones. While the subtitle implies that there will be table talk just like in classic, all of my games had everyone’s head down and lips sealed deciding how to maximize their endgame points, or take advantage of going last to try to win early with three strongholds. 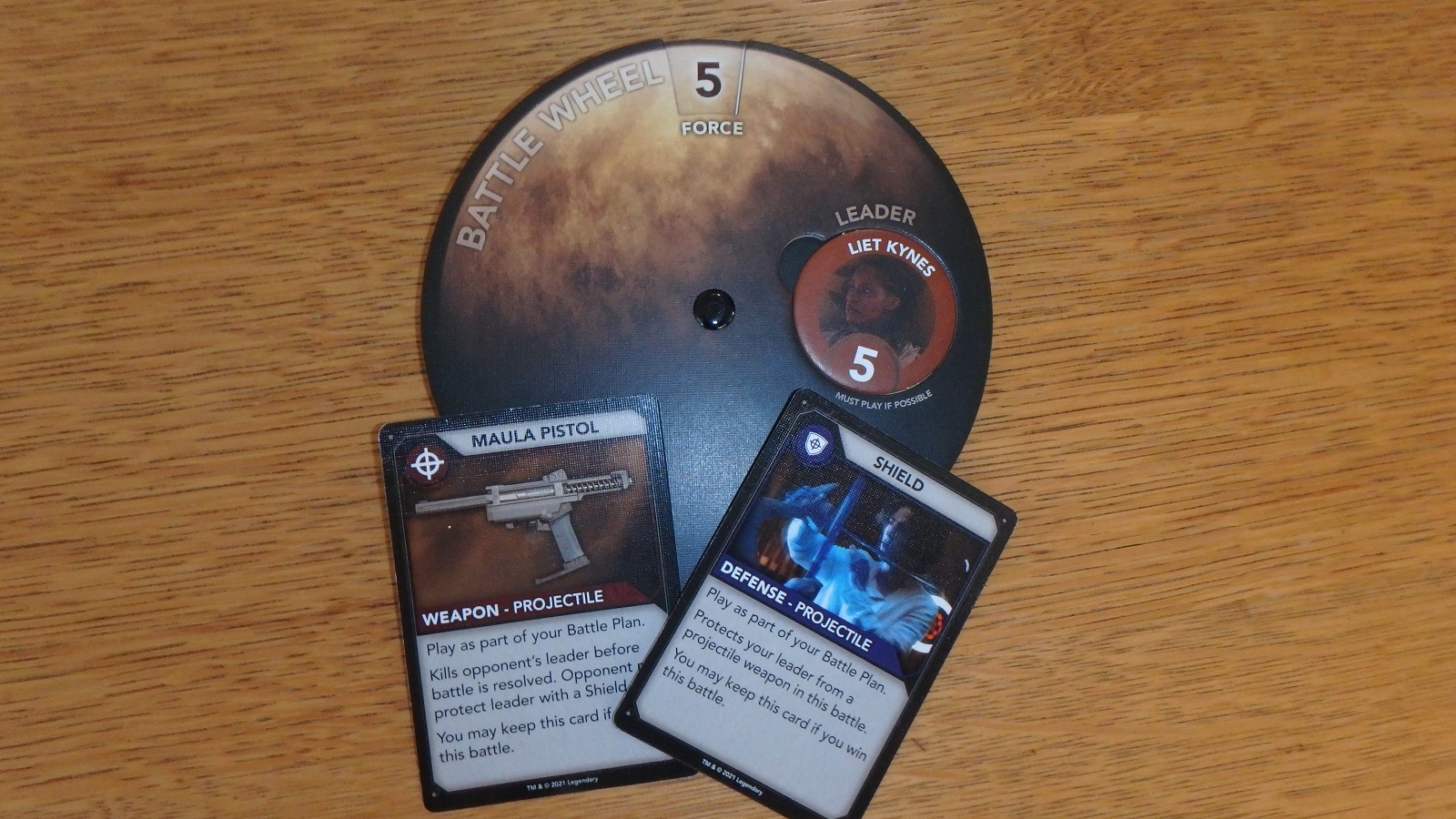 All of that said, I still heartily recommend Movie Dune. Although classic Dune is an amazing game, it’s a rough beast that some people will bounce off of just due to the mechanics, and this game will ensure that players know how to swim before throwing them into the deep end. While I prefer my games to be either very light or extremely involved when it comes to rules, I’m fully aware that there’s a good number of people who appreciate games that fall in between. And if Dune: A Game of Conquest and Diplomacy does one thing, it’s falling in between.

If the original Dune board game is hiking the Appalachian Trail, Dune: A Game of Conquest and Diplomacy is a leisurely stroll through your neighborhood. By streamlining Dune down to a “dudes-on-a-map” game, this game will appeal to more people andl hit tables more, but also fails to be the event that achieves great highs and some horrible lows that the classic is.

Nick grew up reading fantasy novels and board game rules for fun, so he accepted he was a dork at an early age. When he's not busy researching the intricacies of a hobby he'll never pick up, Nick can be caught attempting to either cook an edible meal or befriend local crows.
Related Articles: Dune: A Game of Conquest and Diplomacy, Tabletop
Share
Tweet
Share
Submit