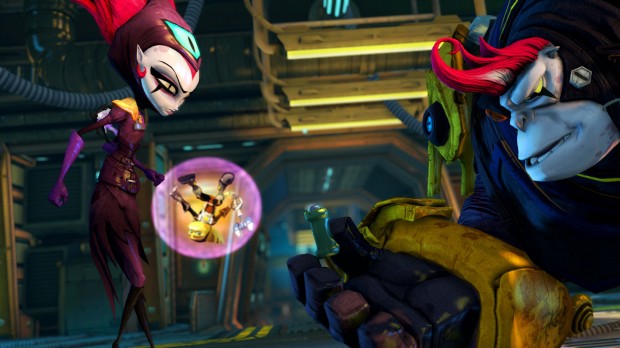 Insomniac’s Ratchet & Clank games have been a mainstay on Sony platforms since their debut on the PlayStation 2 back in 2002. The Playstation 3 brought with the the mostly excellent Future trilogy (Tools of Destruction, Quest for Booty, A Crack in Time), revealing the final fate of the Lombaxes and uncovering the true origin of Clank. With the last two titles to bear the name of Ratchet & Clank (All 4 One, Full Frontal Assault) having come out over the last couple of years to a lukewarm reception, the franchise seemed to have a shaky and uncertain future. An itch needed scratching, and Insomniac had one more tale to tell before the franchise said goodbye to the venerable platform- Ratchet & Clank: Into The Nexus.

Nexus begins an indeterminate amount of time after the end of A Crack in Time; our heroes are escorting the notorious criminal Vendra Prog to the Vartax Detention Center after what we are told was the largest manhunt in galactic history. Naturally, the mission goes awry, Vendra escapes, and Ratchet & Clank pursue her to an abandoned sector of the galaxy that the ghostly Nether have encroached upon from their spectral dimension. While the story is perfectly serviceable and has at least some of the trademark wit and style that the series is so well known for, the stakes just aren’t as high in the previous installments and our investment in the title characters suffers as a result. Ratchet in particular has a melancholy demeanor to him, and the witty one-liners he’s been known to spout even during the most dire of previous situations are almost non-existent. If it weren’t for the comic relief of the supporting cast such as the Thugs-4-Less crew, then the unofficial title of the game might have been Ratchet & Clank: Ratchet’s Funk. Even Vendra Prog, who repeatedly reminds Ratchet that her feelings of loneliness and abandonment reflect his, manages to crack wise at a greater clip than our adorable Lombax.

Thankfully, this downer mood doesn’t impact the rich cartoon visuals we’ve come to expect from a Ratchet & Clank game. Character designs continue to evoke a Pixar-like quality, and the environments are bright and full of life. I couldn’t shake the feeling that we’ve seen all this before in previous games, however, and much of the platforming and level design adheres strongly to the more superficial patterns laid out in the previous installments. The only new mechanic introduced in the game revolves around Clank’s forays into the Nether dimension, which has him awkwardly shifting his gravitational orientation to navigate through 2D environments. Once you get used to the control scheme they become easy enough to work through, but they are a far cry from the temporal puzzles of A Crack in Time and ultimately feel like more work than play.

Of course, it wouldn’t be a Ratchet & Clank game without an incredibly destructive arsenal of outlandish over-the-top weapons, and Nexus definitely continues the tradition. Some of Ratchet’s most popular weapons return, including the Fusion Grenade Glove, The Warmonger, and my favorite death-dealing robot companion, Mr. Zurkon. Plenty of new weapons are introduced, such as the Winterizer (which creates a tornado that freezes enemies and turns them into snowmen) and the Nightmare box (produces a scary beastie that blasts the enemy away in a radius), but the only one I found myself using with any regularity was the Nether Blades gun, which itself recalls the Buzz Blades Gun from Crack in Time. What can I say, filling the screen with purple buzzsaw blades gets the job done. Naturally, weapons can be upgraded at weapon shops via Raritanium ore found throughout the levels, and there’s still something incredibly satisfying about maxing out your favorite weapon and unleashing pure destructive fury onto the screen.

The surest sign in the game that this is a budget title reveals itself in the interplanetary travel screen. Hopping in Ratchet’s ship the Aphelion and launching out of the atmosphere of the planet takes you into a 2D screen populated by planets rather than the engaging space exploration sequences that were introduced in Tools of Destruction. Your travel between worlds is portrayed by a dotted line that you control with your thumbstick, which I suppose is better than simply selecting a planet and hitting the X button, but not by much. It feels out of place in the game, and I found myself missing the ability to joyride through space in the familiar little hot-rod ship.

For all of it’s faults, Nexus at least has more meat to it than the previous digital only installment in the series, Quest For Booty. Completists have a good amount of game on their plate as the story-centric parts of the game comprise a little over half of what you get. One planet in particular has a considerable amount of side quests, and the Intergalactic Arena makes a return, throwing waves of enemies at you in an increasingly perilous stadium in the pursuit of bolts and glory. There is also a Challenge Mode that encourages a replay of the story, keeping all weapons and upgrades and unlocking even further capabilities only available in that mode. I’d say the core gameplay is fun enough to warrant another play through in Challenge Mode, but I’m not sure the story itself is worth it.

While it is a solid budget platformer, Ratchet & Clank: Into The Nexus feels like a story that didn't really need to be told. As an epilogue to the Future series, it comes off unnecessarily morose and doesn't add much to the overall narrative. As a game in its own right, it feels short-changed and recycled for the most part - Fans of the series will likely bask in the familiarity of it, but ultimately Nexus is a hollow offering.

Mike Dunn is the old man of Gaming Trend, having cut his teeth on Atari consoles and First Edition Advanced Dungeons & Dragons back in the day. His involvement with Gaming Trend dates back to 2003, and he’s done everything from design and code to writing and managing. Now he has come full circle, with a rekindled passion for tabletop gaming and a recent debut as Dungeon Master (nearly forty years after he purchased the original DMG).
Related Articles:
Share
Tweet
Share
Submit