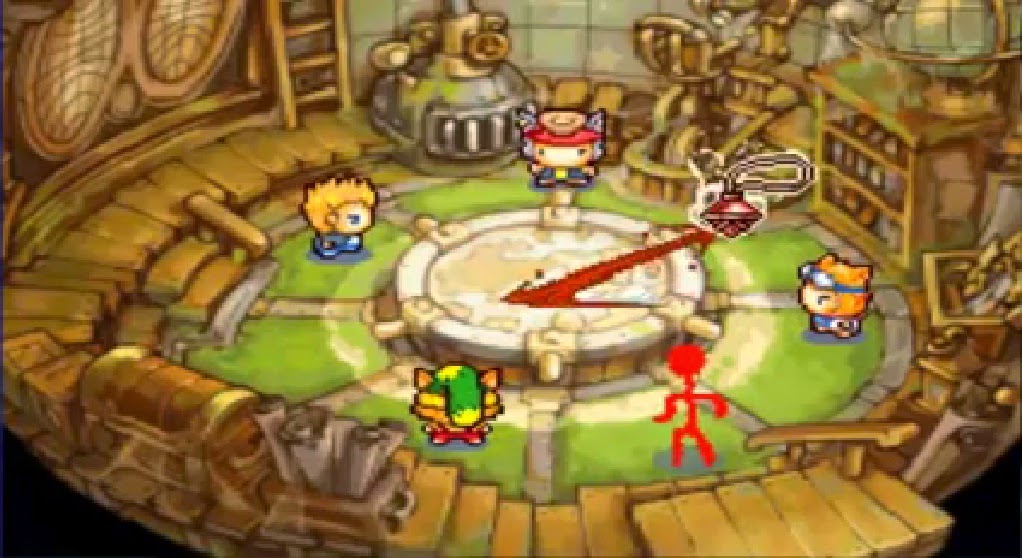 Drawn 2 Life: The Next Chapter is the sequel to the similarly named game: Drawn 2 Life. This sequel was released two years after the original, and can be played on either the Wii or Nintendo DS. The two different versions are actually two different games and have completely different storylines for the player to explore. This review focuses on the Wii version. The original Drawn 2 Life game was received very well by gamers, and was nominated for two different awards. The Next Chapter, released in 2009, has not been shown similar love, and has had a mixed reception. Those familiar with the original will recognizes many of the characters, the ability to draw objects, and much more from the earlier title. If you loved the first Drawn 2 Life game, but are wary of the sequel’s reception, or if you’re an avid fan of the plat-forming genre searching for something new to sink your teeth into, I would urge you to read on.

In the beginning, of the game that is, the Creator, that’s you, draws the heavens and the earth. This knowledge is recorded in the Book of Life, which is cared for by the people of Raposa village. However, the book has been stolen, and so the people of Raposa ask the Creator for help. The Creator chooses to send a champion to solve this plight. The player draw’s his or her champion, and it becomes the his or her’s avatar. As the player navigates Raposa Village in search of the Book of Life he or she will notice that there are many items missing from the various buildings. The Champion is ultimately charged with the task of tracking down the thief, and restoring the village. This quest leads the player through 4 different worlds as he or she discovers a much more sinister plot that will put the citizens of Raposa in great danger. Unfortunately, the story only takes about four hours to unfold.

At its heart, Drawn 2 Life: The Next Chapter is a standard platformer with the added novelty of the player being able to draw into the game. Your Champion comes equipped with the ability to jump, double jump, punch, slide tackle and butt slam. Controlling these abilities is mostly easy and intuitive; however, I never actually mastered the art of butt slamming. The levels are designed with platforms that move, extend, rotate, seesaw, etc.,  and all of these platforms are drawn by the player. Other plat-form genre staples that you will find are ceilings that drop to squish the champion, cannons that fire your character through the air, and much more. Like many other games, The Next Chapter features accessories that give your character added abilities, such as a monkey tail for swinging from tail posts, or claws for climbing sky scrapers. All such accessories are drawn by the player.

Drawing is a very central aspect to this game. As such, it’s important that the game’s interface for creating works of art is simple and easy to use. Drawn 2 Life: The Next Chapter certainly achieves this. The games artistic arsenal includes circle and square brushes of adjustable size, line and shape drawing tools, fill tools, templates, stamps, and color pallets. Some functions include zoom, undo and redo. Finally, the interface features an image of what your drawing will look like in game. I found that it was very easy to get a drawing to look how I wanted it.

After one completes the story, the game still has plenty for one to do. Templates, color pastels, and stamps can be unlocked in the levels, and then later purchased at Isaac’s shop in Raposa village. Additionally, there are timed runs of levels and extra items to collect. Finally, there are multiplayer mini-games based on the sports: soccer, hockey, basketball, and volleyball. These mini-games are amusing for a time, but really are far from the bread and butter of the game.

Drawn 2 Life: The Next Chapter looks cute and cartoony, while living well within the visual abilities of the Wii. Objects presented within the game are simple, but aesthetically pleasing. Think Animal Crossing meets Paper Mario. The game presents a variety of different environments, and each is well represented visually. While everything looks nice, nothing ever looks incredible. One thing that I felt The Next Chapter had to nail was making it so that my drawings did not look out of place. The cute and cartoony style accomplishes this quite nicely.

I was very much disappointed in the music of Drawn 2 Life: The Next Chapter. Each world featured one song for all of the levels in that world. These songs were minimalistic, short, and constantly looped. At its best, the music was easily ignored. At its worst, the music was annoying. The original Drawn 2 Life gave the player the option of using coins to purchase music in the town’s shop. I wish this feature had not been scrapped. Despite the lack of variety, all songs sounded appropriate for their uses, and were balanced well with the sound effects. However, there were times when the background music would stop entirely. Sometimes this seemed like it was intended to add drama to what was happening. Other times it seemed completely random, as if it were a glitch.

The game features 20 different levels spread throughout 4 worlds. Doorways to these

worlds can be found in Raposa village. The storyline leads the player through all of these levels, each having an objective that must be completed before the Champion can return to the village. These objectives vary from defeating a specific enemy to drawing an accessory for your character. After completing a level, the hero must backtrack through Raposa village and talk to a townsperson before they can move on. This backtracking really puts a cramp in the early portion of the game as the door to the first world is rather far from the townsfolk. After the player finishes back tracking, they are subjected to a few lines of dialogue that string the story together, and give the Champion a reason to move on to the next level. This wouldn’t a problem, except that it takes longer to backtrack than it does to read the dialogue.

As a player moves through a level, he’ll be given a plethora of opportunities to draw an animal or object. That object will appear in the level, and all subsequent levels of that world. At first, this novelty was fun, but eventually it turned into a distraction that paused my enjoyment of the game. In the later worlds, I ended up ignoring many of the opportunities to draw in favor of moving through a level nonstop.

Despite these issues, Drawn 2 Life: The Next Chapter is a fun game. The obstacles presented in each level sometimes offer a challenge, but never seem undoable. The game provides you with a steady stream of extra lives, and it is often impossible to die from falling. Instead, the champion finds himself in an earlier part of the stage, and works his or her way back. This makes the game quite a bit easier, and better suited for a younger gamer. I could almost see myself as a child falling in love with The Next Chapter because of its stimulating platforming, and creativity inspiring drawing mechanic. If you’re a creative young gamer, or a seasoned lover of platforming titles looking for more levels to conquer, then it would be hard to go wrong with Drawn 2 Life: The Next Chapter.