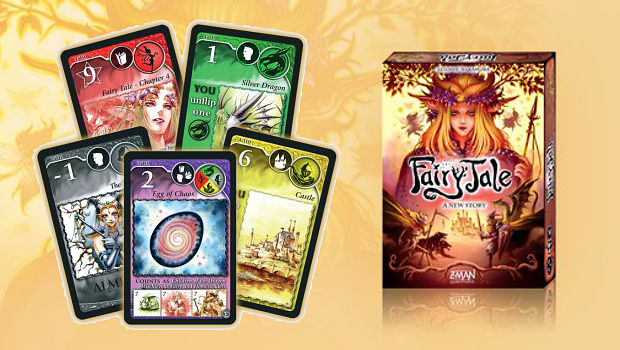 Promise me you’ll keep your pants on for now.

Readers make demands of writers, but occasionally the tables turn and the writer demands something from the reader.

Good. We’ll come back to that promise later.

Every male gamer with a gold band on his ring finger hears the dreaded question from his espoused sooner or later: “Honey, you got anything in that big ol’ game collection of yours that I would like to play?” That’s when the flop sweat flows and the antiperspirant fails. You think, If I don’t come up with something, I may have to justify my umpteenth Kickstarter game to her next time! She might even tell me I’m dropping too much cash on Warhammer minis, and the next wave is due in stores any day! Gaaack!

Dude, chill. I’ve got the game for you: Fairy Tale. The box cover features a fairy queen with flowers in her hair. And a dashing knight. And a golden kingdom.

She’ll love it. And despite the description so far, so will you, because I didn’t yet mention the dragons, dwarves, and demons, but they’re in there too.

Fairy Tale is the original card-drafting game, meaning you deal the cards, then players select a card and pass the remainder to another player. By this, each player creates a hand of cards that best reflect a chosen objective. In this case, score the most victory points by building the best mythical kingdom of 12 cards. It’s a winning game system: The megahit 7 Wonders builds off this idea and last year’s surprise hit Sushi Go! does also.

But Fairy Tale was first (in 2004), and first is often best. Z-Man Games understands this and is publishing a refreshed edition of the game due to hit stores in April 2014.

The original edition of Fairy Tale published in Japan had 100 cards. The three Egg of Chaos cards (explained later) are new to this edition, plus the Storyteller (2 points per face-up Story card), Gatekeeper (2 points per face-up Home card), Shadowking’s Tale Chapter 5 ( 8 points for most face-down cards), three Treasury cards (4 points and draw two),  and a second Trickster card  (explained later) fill out the rest .

Some of those new cards feature slightly different-looking artwork, but that is not the worst issue with them.

This latest edition of Fairy Tale looks good, but it could have looked spectacular if Z-Man Games had put more effort into this refresh. When the only component in the game is cards, why not make them worth oohing and aahing over?

The following COULD have been included in the new edition:

Sadly, these cards lack all those wished-for qualities. Instead, they feel cheap, shuffle poorly, threaten to crease, and feature a flat finish that guarantees rapid wear and a ratty-looking set of cards after too-few plays.

I don’t understand many of the decisions Z-Man Games has made since its sale to Filosofia, the über-game company of Canada, but oh!, to have been in the meeting where execs decided to forgo WOW! for *meh* when given an opportunity to refresh this game. My tongue-lashing would have been EPIC.

Instead, the only EPIC Z-Man poured into these cards is FAIL—which is tragic, considering the game’s outstanding play.

And now, a deep breath before the game play explanation…

At the very top left of each card is a difficult-to-read ratio showing the frequency of the card in the 110-card deck. This helps players know the likelihood of getting a specific card needed to fulfill a set.

Fairy Tale is played in four rounds. The object: Collect the most victory points by forming sets of cards and meeting conditional card objectives. Some cards played in the game force players to flip specified cards face down or unflip them to face up.  Some Flip cards must be played against yourself, though they score high points. Other Flip cards play against everyone. Unflip cards score only a point, but they can rescue a needed flipped card. Flipped, face-down cards at game’s end neither score nor count toward special conditions.

Shuffle all the cards together and deal each player five cards. From the cards in-hand, choose one. Pass the unchosen cards to the player on the left (or right, depending on the round). Repeat this drafting until all the cards are chosen. Each player now has drafted five cards selected to achieve a round objective or end game goal. Only three of the five cards will be played per round,.

From the drafted hand, select a card secretly. When all players have a card ready, reveal them simultaneously. Resolve any cards that act on other cards just revealed, such as a Hunt card, which would stop the action of any revealed cards of the faction depicted. Then resolve (if any) Unflip, then Flip, and then additional card Draw. After all resolutions, players lay their revealed card in their personal card tableau in front of them. Repeat for the second and third card selections and reveals. Discard remaining cards.

Repeat the round of play three more times, then score the cards for each player. The highest victory point total wins.

The genius of this game is how the cards chain or combo to multiply points. Add to this the action of flipping or unflipping a card, both yours or your opponents’, and the strategy ratchets up. Consider that a Flip card  in your tableau is worth 6 VP, which may make it more valuable to play against yourself if it outscores any card it forced you to flip. Or do you play a Flip that forces an opponent to flip one of her essential cards?

The game includes two Trickster cards in the Shadow faction that count for -1 VP, but they can mimic any other card in the game, operating like a super wild card. The 2-point Egg of Chaos card can be any faction, any card type, and it can  sum with any card that has nothing but an asterisk in the top left corner. That asterisk mark counts the physical number of a card and sums with any like it in a player’s tableau to score points. If the asterisk is paired with a multiplier, then that card chains with another, different card specified in the Special Conditions at the card’s bottom to multiply points, which add up fast.

Conditional cards score points only by meeting their requirements. This might include collecting the most Holy Empire cards or at least two each of both Dragonvale and Fairywood cards. Planning how best to meet those conditions, especially when not knowing what each round of cards might reveal, adds tension to each planning stage.

Still got your pants on, right?

Fairy Tale is a clever card game with a theme that might very well appeal to the Mrs., scoring you points—and possibly helping you score a little later in the evening. Better yet, it plays more than two, so if the wife chooses unexpectedly to call her three friends Bree, Bridget, and Brittany to join the fun, you can play up to five—and not embarrass yourself by getting caught in your Superman thong, because you still have your pants on, as promised, right? This is even more important if the friends happen to be Bob, Barry, and Bryan.

Fairy Tale works as a great filler game too; because all players reveal their cards at once, there’s little down time and the game moves fast. Experienced players might get in a trio of plays in an hour.

That speed of play mitigates the truth that although this game features fairies, elves, and bards, it can be cut-throat. A Flip card well-timed could break the back of an opponent. It’s no hard feelings, though, since a follow-up game could be just minutes away, allowing the loser revenge.

While some luck exists in the card draws, the drafting portion of the game puts control back into the hands of players. In a two-player game, players have even greater control of cards through what they take for themselves or keep from their opponent. Larger groups make this less likely, but the drafting and high game replayability make any size group fun.

Unlike 7 Wonders, Fairy Tale is nothing more than cards, so it’s highly portable and has no little chits to lose and nothing to set up, save for the initial card deal. Unlike Sushi Go!, Fairy Tale features deep play, since the cards offer more combos and provide additional strategy through flipping and unflipping cards.

Love in the kingdom of fairies

In short, Fairy Tale is a superior card game that both casual and hardcore gamers will enjoy. Yes, the publisher’s card stock choice is a letdown (which knocked 10 points off my final score), but your significant other probably won’t care about that as much as you do. She’s just happy you two are playing a game together, and that you demonstrated your undying love by selecting something she might like to play. I’m sure she’ll be grateful—really grateful.

OK, you can take your pants off now.

Fairy Tale pioneered the card drafting mechanic found in many popular card games today, and the hit game 7 Wonders replicates many of its features. Z-Man Games offers an updated edition with 10 new cards and more legible graphic design. It’s a superior, fast-playing, portable, filler card game that should appeal to a wide audience of both casual and hardcore gamers.