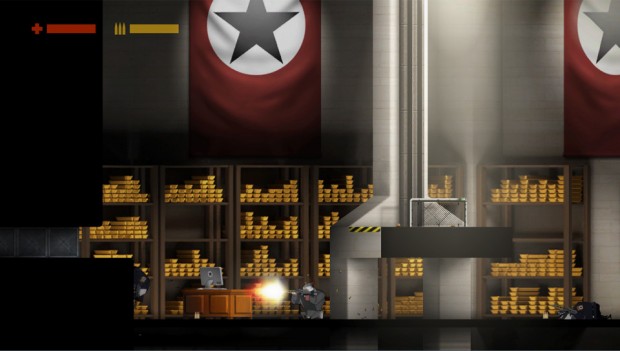 It’s hard these days to set yourself apart in the world of 2D platformers.  You need to have some quirk that sets it apart.  In Rocketbirds: Hardboiled Chicken, the evil penguins are trying to take over the world, and it’s up to your character to defeat them.  Yes, the game doesn’t take itself too seriously, but does the game warrant the nearly $12 it commands on PSN to play on your Vita?

Your character Rocketbird looks kind of like the old guy from American Chopper if he had been born from a chicken egg.  With a bandana over his scalp and augmented strength, he is a one-chicken army.   He also has no problem using weapons to shoot the menacing penguins.  One hit and the feathers fly all around.  After several  shots the penguins take flight, juggled in the air by the bullets penetrating their bodies.  If he runs out of bullets, he can roll on the ground to take position and sucker punch the enemies.  You have a couple of weapons to choose from, but in all honesty there really isn’t much reason to change your weapon once you find one you like.  They have different power and rate of fire, but it all evens out in the end.

[singlepic id=11145 w=320 h=240 float=right]Running through the levels has a lot of similarities to many other platformers.  There is a good chance you can make a jump if your fingertips can grab hold and raise you up.  Rolling on the ground does allow you to make it through shorter passageways, and elevators are at your disposal as well.  Your progress is impeded by locked doors.  To resolve this issue you need to grab the correctly colored key card like you were playing Doom in the 1990’s.  Some eventually require moving a box to give a little boost to grab that ledge that is just out of reach.  Later on you use brain bugs to control other penguins, similar to the telekinesis power used in Second Sight or Psi-Ops.  You can control them to hit buttons to open doors or gun down their fellow foul friends, then make them commit suicide with a bullet to the head as their final act of servitude.

When you die, you won’t have to worry about completing a large portion of the level again.  In fact, they were almost overly generous with their checkpoint system.  When you die, you barely lose any progress at all.  While I do appreciate the fact that this makes the game easier, it also makes the game much shorter as well.  There aren’t many times that you will get stuck, but a few bosses get in the way where the difficulty jumps exponentially.  While bosses should be more difficult than the underlings, they shouldn’t be so difficult that they make you want to throw your console across the room.

[singlepic id=11135 w=320 h=240 float=left]A few Vita enhancements have been incorporated into the game.  The Vita can be tilted to look around, giving you a sense of 3D environments, even when they really aren’t.  This could have been more useful for making some of the jumps or seeing enemies, but it really isn’t used in any meaningful way.  Sometimes you’ll get an advance look at the enemies coming up, but mostly it was added to the game to get another bullet point on the features list.

A much better use of the Vita’s functionality is the use of the rear touchpad.  When aiming grenades and other projectiles, moving your finger up and down aims the trajectory.  The accuracy using this mechanism is better than trying to use some kind of analog stick.  Hopefully we’ll see more of this in future Vita games.

Graphically, Rocketbirds looks good.  The backgrounds are detailed, and there is a surprising amount of variation among them.  While you might be travelling through jungle terrain one moment, you could be inside their drab concrete headquarters the next.  The contrast between them is striking.  The characters on the other hand look basic in comparison.  You have a few enemy models that go against you, but they don’t have any real way to differentiate amongst them.  The animations are a bit stiff.  However, when they get shot, feathers fly up all around, showing a nice attention to detail.

[singlepic id=11143 w=320 h=240 float=right]The soundtrack provided by New World Revolution really fits the mood of the game.  The way the lyrics of the songs match what is going on during the cutscenes helps integrate the two.  Most of the cutscenes are fully voiced.  However, occasionally you can sneak up on some penguins that are having their own private conversation, making small talk, made up of squawking.  You can see what they are saying in text bubbles, but the squawking adds a humorous twist to the dialogue.

In the end, Rocketbirds: Hardboiled Chicken is a tough game to score.  It has some moments of humor and some great animations, but there isn’t much variety in the gameplay or the puzzles.  The level  design is rather bland.  The most interesting part of the game, flying through on rocket packs, isn’t utilized enough.  In the end, it feels like the externals were worked on more than the gameplay, making the game more style than substance.