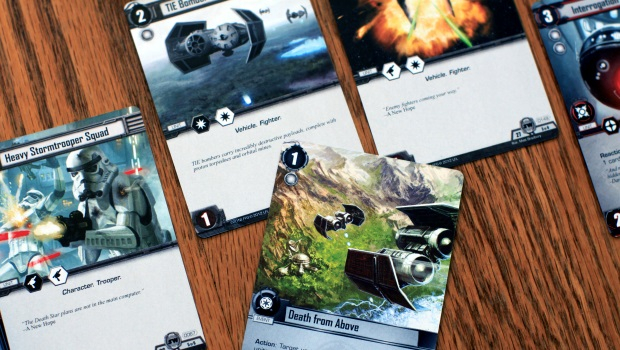 A long time ago, in a galaxy far far away, a maverick executive at 20th Century Fox took a chance on an independently produced, low budget mashup of Flash Gordon serials and samurai epics. You’ve probably never heard of it. #hipster

STAR WARS: THE CARD GAME is Fantasy Flight’s most recent Living Card Game; imagine a Collectible Card Game with a much less obnoxious business model, in that all cards are equally common. Two players face off, armed with 60 card decks representing the Light Side and Dark Side of the Force. The Light Side wins if they destroy three of the Dark Side’s Objectives. The Dark Side wins by running out the clock, tracked on a Death Star dial.

You get four pre-built mini decks (two Light Side and two Dark Side) which gives you just enough cards to start building decks for constructed formats, but not enough for competitive play. You also get a bunch of small tokens to indicate various card states, a Balance of the Force marker, and a Death Star dial.

The artwork is by FFG’s staff artists and varies from OK to great. The components are of the high quality we expect from FFG. Likewise, the rulebook is as verbose and convoluted as FFG’s other games, but at least it is organized logically.

It is impossible to overstate the importance of the Star Wars trilogy (yes, there are only three Star Wars films) to my upbringing. Like all good geeks, I am HIGHLY CRITICAL of adaptations into other media. (I’ve gone through this with PC games; for every great game like Tie Fighter, there were several mediocre/bad ones like Rebellion.) I don’t believe in giving a game a free pass because I enjoy the film it is based on.

The trappings of the adventure cliffhanger genre translate well to this game. Yes, the game is a little swingy – the tide can turn quickly – as quickly as our heroes make surprise escapes in the movies. The tone, pacing, and “feel” of the films comes through effectively. In my experience, the light side of the Force wins more often than the dark side, which is not true to the films (the dark side wins in three out of the six episodes), but the spirit of the movies is captured well.

I should point out that the Core Set includes characters and settings ONLY from the original trilogy, not the prequels. Darth Vader is a badass samurai, not an annoying kid with a bowl haircut. There are a handful of characters and situations from the Expanded Universe, but most of the cards in the Core Set are from the actual films.

Most of the game’s mechanics have close parallels with MTG, but a few key additions make the gameplay fresh. 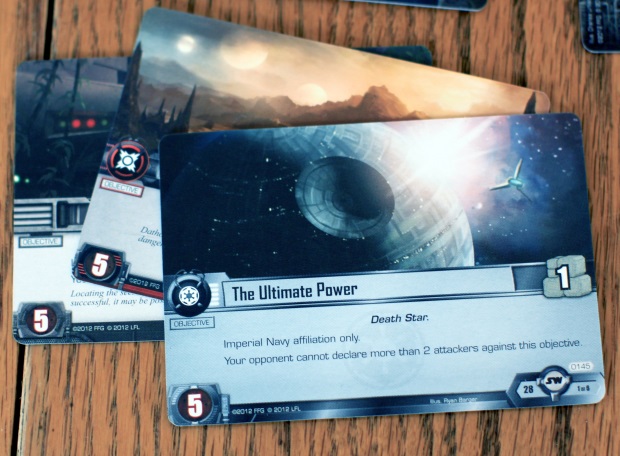 My favorite innovation is the Edge Battle. Before combat, players bid for initiative. These bids are made blindly, and give you the opportunity to BLUFF your opponent. A well-played Edge Battle will cause your opponent to over-commit resources, and put her into a weakened position when she thought she had the upper hand. This also gives you a way to use cards that would otherwise be dead in your hand, like late-game cards that you happen to draw early.

Deck construction has a new twist: instead of choosing cards one by one, cards are grouped into Objective Sets of 6 cards each. This allows the designers to include ridiculously overpowered cards, by grouping them with weaker cards; each Objective Set is roughly as powerful as any other.

Resource producing cards (i.e. “lands”) work differently too. Some cards can be exhausted (“tapped”) for TWO resources instead of one, but they only refresh one resource per turn, and must be completely refreshed before they can be used again. This requires you to make hard choices: “do I need the extra resource now, or later?”

As with any card game, it is all about the combos. Hey, Light Side, you think you are SO CLEVER, putting “Yoda” into play and devoting him to the Force (giving you a tactical advantage throughout the game). Well, I’ll play “A Disturbance in the Force” followed by “Force Lightning”, KILLING YODA IN ONE TURN. 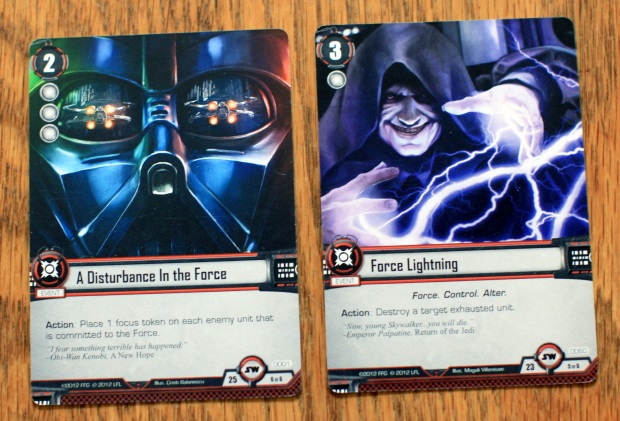 I predict that constructing decks will be a lot of fun with this game, but players deserve a FAIR WARNING: the rules allow two of each 6-card Objective Set in your deck, but the base game includes one of each Objective Set. This will give players a taste of the game, but competitive players who want to build consistent decks will want TWO COPIES of the Core Set. The blurb on the box says it “contains everything two players need,” which is only true FROM A CERTAIN POINT OF VIEW.

Conclusion: Who should buy this game

This is the perfect game for Star Wars fans who love MTG but also love not spending hundreds of dollars rebuilding their decks four times a year. Yes, the Living Card Game format features frequent booster packs and occasional major expansions, but all cards are equally distributed; there are no rare cards to hunt down.

The Core Set, by itself, is a fun filler game that captures the Star Wars flavor. Serious players who aspire to building good decks will want two copies of the base game before investing further. Fantasy Flight sanctions organized play for this and other LCGs, so you should have no problem finding other Force users to play against. For now, I'm happy to treat is as a luck-heavy diversion to enjoy with my MTG friends.