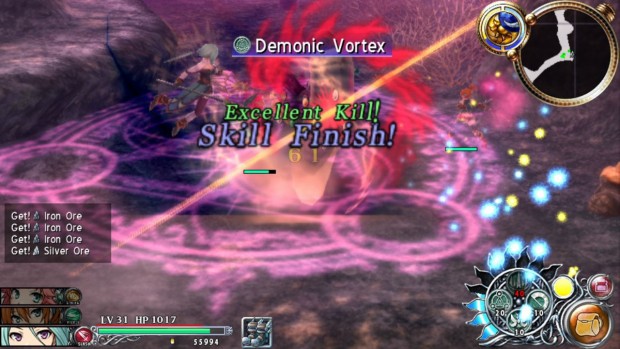 When most gamers make a list of the most popular console RPGs, the Ys series would be towards the bottom of the list. While several games in the Ys series have been released here in the US, it’s never gained the traction of the other more popular franchises. Maybe this is why Nihon Falcom has decided to take the reigns of Ys IV, which was released in several other forms by other developers, and brought it to an American audience with Ys: Memories of Celceta for the PlayStation Vita.

The story should be familiar to any seasoned RPG player. You wake up and have no idea where you are, or who you are. You stumble around and walk into a bar where some questionable character says hi and is shocked to see you. You find out that you are named Adol, and this guy Duren will help you until you get your bearings. You find out from Duren that you were planning on heading to the forest of Celceta after seeing him last. The government hires the two of them to create a map of the forest. This has never been done before because there is a rumor that the forest saps the memory from those who enter it. The pair hope that they can not only make some money, but also find out what happened to Adol during his last adventure.

While some RPGs like to give you hours of exposition before actually letting you play the game, it doesn’t take long for Memories of Celceta to put you into the action. The first mission doesn’t take very long, but it gets you familiar with the combat quickly. After that you are able to explore almost at will. That doesn’t mean that you’ll be constantly fighting. You’ll find yourself back in town conversing with the locals and getting side quests.

When you explore your surroundings, the enemies you face are wandering around as well. Since the combat is in real time, you can try to avoid enemies if you want, or just walk right up to them and pound away. Enemies have different strengths and weaknesses. The characters in your party have different abilities and weapon preferences, so you may want to switch which one you are controlling depending on which enemies you are battling. The AI does an adequate job of controlling the other members of your party during combat, and healing is a matter of standing in one place for a period of time.

Stringing combos is easy, but just trying to wallop your enemy with the same attack over and over can end in defeat quickly. Dodging and guarding attacks becomes vital to stay alive. Powerful attacks that can be charged become available as the game progresses as well. Knowing when to use these can be the difference between surviving the battle and landing flat on your face.

As you progress through your adventure, your map will gain more details and show your progress. Adol will also show progress throughout by gaining memories. These memories help Adol grow as a character, and occasionally they provide information that is needed later in the game. They don’t add that much to the experience, as the plot isn’t that out of the ordinary from the typical JRPG, but that shouldn’t surprise you too much after the first hour.

Graphically, Memories of Celceta is disappointing. The polygon count on the models is surprisingly low. They almost look like they came from a late PS2 game rather than a handheld that is nearly equivalent to the PS3. While there are hand-drawn images of the main characters on the screen during conversations, they really don’t do anything to add to the scene. The animations are fine, and the number of effects like the screen up like the fourth of July, but the graphics don’t make the game feel dated.

The soundtrack does a great job of conveying the mood. The music changes depending on the location you are at and what is happening on screen. The battle effects are balanced against the music, so you get all the audio feedback you are expecting but still feel the tenseness of battle. The voices aren’t bad either, but you aren’t going to hear more than a couple of lines of conversation from each character.

In the end, Ys: Memories of Celceta has a lot going for it. The skirmishes are fun with a healthy dose of strategy, the soundtrack adds to the action instead of detracting from it, and the game doesn’t overstay its welcome at around 25 hours. However, with the dated graphics and cookie-cutter storyline, it may be hard for the Ys series to break out into the mainstream. It’s a shame, since the Ys series deserves more attention than it gets. A little more polish could have really brought it out to the forefront.