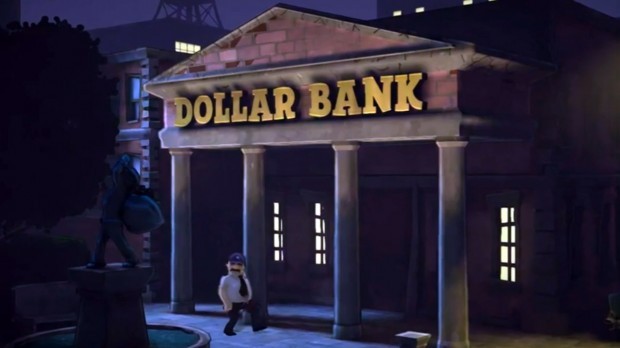 Dollar Dash is a fast-paced objective game that has four players beating one another up and stealing their cash. In the standard mode, players control a single burglar who compete to become the first player to stash enough money in a getaway vehicle to fill the victory bar. Players grab money on the floor and beat up rival players using weapons and power-ups (that they also find on the floor) in a frantic race to victory.

The controls in Dollar Dash are extremely hard to master. Weapons are a pain to aim and the speed of your character changes quickly as you grab power-ups and lose/ gain money (which affects your weight), and the combination of these things make the game way too chaotic to keep up with on many occasions. When combined with the frantic gameplay problems, the overall experience becomes downright frustrating.

There are three game modes: Dollar Dash, the standard mode, Hit’n’Run, wherein players get money solely from battle with other players, and Save the Safe, wherein players earn cash by carrying a heavy safe for as much time as possible. Each of the modes plays more or less the same, with slightly different strategies. Unfortunately, the mechanics often get in the way of strategy as gameplay is so chaotic and fast-paced that the action onscreen becomes difficult to follow. After each match that I played, I felt that my victory or loss was based more on a flip of the coin than anything else.

Dollar Dash has tons of unlockables to buy using dollars gained from gameplay. This includes purely aesthetic items to customize your avatar’s appearance, and plenty of new items and perks that are useable or always-active during gameplay. Players can try out new hats, sunglasses, and hair on their avatar, and increase the amount of money their character can carry, and try out ridiculous new weapons on their opponents.

The music and graphics of Dollar Dash are acceptable for what it is, but definitely don’t do anything to make up for the game’s shortcomings. Characters and animations are simple and seamless, but also extremely uninteresting. The music is appropriate, but also dull and unoriginal.

Dollar Dash is a briefly enjoyable, but uninspired game. It has its moments for those playing amongst friends, and if they can overlook minor details like “game design,” but is there are better ways to spend your money. With a $10 price tag, you’d do well to dash away and use your dollars elsewhere.