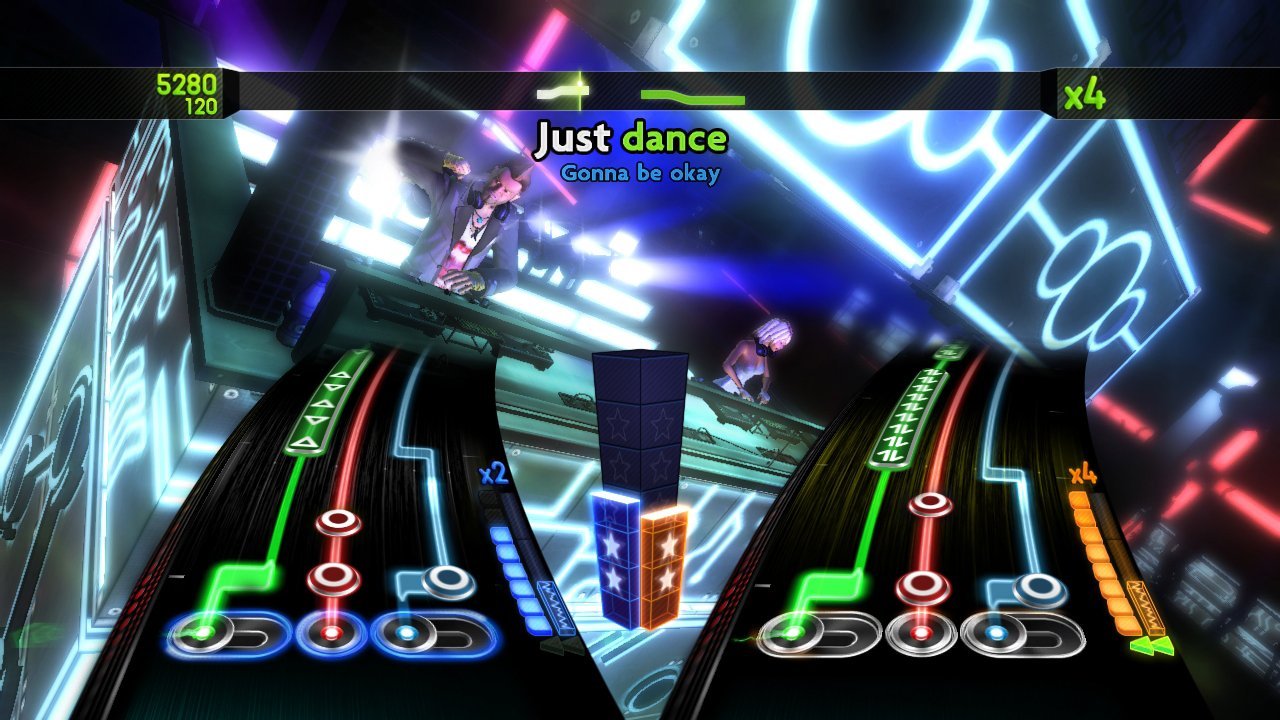 2009 was a great year for video games, with a huge variety of top-tier titles coming out to entertain fans of virtually every genre.  FPS fans were treated to Modern Warfare Reflex, Mario fans got to enjoy New Super Mario Brothers Wii and horror fans got a taste of Dead Space: Extraction. The most fortunate fans of all were the ones that love music games, with nearly a dozen titles from Activision

All these pretty visuals wouldn’t make a lick of difference if the music didn’t live up to the hype.  This is a music game, the most important piece should be the tracks right?  Not to worry though; the number of tracks, as well as the variety and quality, is absolutely outstanding.  One of the few complaints about the original DJ Hero was the fact that a lot of the tracks were repeated throughout the game.  You’d get to hear ABC by The Jackson Five a LOT.  This wasn’t necessarily a bad thing, as many of the mixes were surprisingly good, but it did leave some players craving more variety.

This time around the developer made sure to have far fewer repeats, offering gamers a much bigger music library right off the bat.  With over eighty quality tracks that ship with the game, DJ Hero 2 has something to offer for nearly every musical palette.  No matter what your musical inclinations are, the inclusion of artists like The Chemical Brothers, Lady Gaga, Salt N Pepa, and Deadmau5 are sure to satisfy your tastes.  Don’t worry that the included tracks are obscure songs from these artists either – for the most part you’ll have some of the biggest hits that they’ve produced.  Everything from Galvanize to Bad Romance to Push It is featured in the game.  As if that wasn’t enough, finishing the game unlocks (among other things) Daft Punk’s Human After All from the upcoming movie Tron Legacy.  I could go on and on about the music featured in this game, but suffice it to say that you will not be disappointed.  There’s even more great news as publisher Activision Blizzard already has plans for Linkin Park downloadable content to be available soon after the game’s release and plenty more DLC available before the end of the year.

The control scheme is another area in which DJ Hero 2 made huge improvements.  This is particularly surprising, as the controls from the first game were extremely tight and intuitive.  The controls really haven’t changed much from the first game, more like the developers expanded on the theme that the first game introduced.  As with any of the Wii games that use custom peripherals, the turntable has a slot that you plug your Wii-mote into and then you

When DJ Hero was first announced there were plenty of doubters claiming that it was gimmicky and just wouldn’t work.  That title completely silenced it’s critics with inventive gameplay and an obvious passion for the music it contained.  DJ Hero 2 builds on that foundation in every way, expanding the gameplay techniques, the multiplayer modes, and including an excellent career mode that will challenge you no matter what difficulty level you play it at.

The career mode (called Empire mode) starts players out as an aspiring DJ, with your home club of Ibiza being the only place you can play.  Players get to choose their DJ, the club name, and a logo to represent themselves and then it’s time to start spinning that turntable!  As part of shaking up things in DJ Hero 2 your first gig is a six song megamix that will test your endurance.  Gone are the days of just single mix after single mix to advance you through your career.  In Empire mode you’ll have plenty of variety to keep you busy, whether it’s megamixes, challenges, or DJ battles.

Sadly enough, the DJ battles are the only thing that mar the gameplay in this title.  While it’s a solid concept that we’ve seen implemented in the Guitar Hero titles, it’s just executed poorly in this instance.  This is unfortunate, as the idea of battling another DJ fits into this title beautifully.  Unfortunately, the difficulty here is incredibly uneven.  Far too often you’ll find yourself with what you think is a huge advantage over the game with a sure win in your future, only to find out that the other DJ stages an unbelievable comeback to defeat you.  The opposite can be true also, as you can be completely baffled by a mix and somehow still come out on top, as if by magic.  This wouldn’t be so bad if it didn’t happen so frequently and end up being so frustrating.  Issues with the DJ battles aside, the career mode is very well done overall and will keep players come back to it over and over.

One thing that hasn’t been covered so far is the use of vocals in this game.  In most other music titles players can fake their way through singing a song by following the words on-screen and being vaguely familiar with the tune.  This is most definitely not the case in DJ Hero 2.  Not only do you have to be very well acquainted with the lyrics of both songs that are being mixed, the game is also fairly demanding when it comes to pitch.  Throw in having to deal with track switches and rewinds, and your average vocalist is up for quite a challenge.  I’m not saying that singing in this game is not worthwhile, just be warned that you’re going to have to endure some very low song scores while you learn the lyrics and timing that this title demands.  This does bring up another point though, the fact that all the songs in the game are “no-fail”.  No matter how abysmally you do on a track, you’ll still play through the entire thing and not have to start over to try and complete it.  This type of gameplay decision doesn’t work as well in other music titles, but for DJ Hero 2 it works perfectly.

Gameplay on the multiplayer side has seen a huge amount of expansion, as several new modes and tweaks have been brought to the table.  Multiplayer in the original DJ Hero wasn’t overly exciting, with players having the option of co-op or head to head play.  Co-op in this instance is rather misleading as both players merely play the same song, potentially at different difficulty levels.  There was no reward for hitting consecutive notes together, or getting a perfect on special sections of the mix.  Head to head play was watered down too, as it only consisted of who achieved the highest score at the end of the song.

As stated previously, multiplayer has been cranked up this time around, with plenty of competitive modes to entertain players.  One of the biggest changes from the last version is that rewind is now available in multiplayer.  This means if you build up enough of a score you can rewind and replay through a section of the song, leaving your opponent standing while you rack up more points.

The majority of the multiplayer modes are easily recognizable to any fan of the Guitar Hero games.  Star Battles challenge you to achieve more stars than your opponent, so you’ll have to use all your Rewinds, Euphorias and Freestyles wisely to win.  Power Deck Battles are made available once you earn some custom decks in Empire mode.  Each of these decks provides bonuses to your gameplay, whether it’s a longer Euphoria, more frequent Rewinds, or higher score multipliers.

The really exciting multiplayer modes are Streak, Accumulator, Checkpoint, and DJ Battle.  Streak is a test of your nerve as well as your skill – build up your perfect streak and then bank it using the Euphoria button.  You can only bank a streak that’s higher than your currently stored one – make one mistake and it resets your streak.  Highest streak at the end of the track wins.  Accumulator is similar to Streak except your banked score builds up instead of just being your highest stored streak.  Checkpoint breaks up each track into sections and you have to outscore your enemy in that section to win it – the person with the most won sections at the end of the song wins.  My favorite mode has to be DJ Battle – both players play the same song, but you alternate control of sections.  The back and forth battle in this mode is a blast to play and should be at the top of your list to try out.

More than a music game, this is an entirely new way to enjoy rhythm based games.

Ron Burke is the Editor in Chief for Gaming Trend. Currently living in Fort Worth, Texas, Ron is an old-school gamer who enjoys CRPGs, action/adventure, platformers, music games, and has recently gotten into tabletop gaming. Ron is also a fourth degree black belt, with a Master's rank in Matsumura Seito Shōrin-ryū, Moo Duk Kwan Tang Soo Do, Universal Tang Soo Do Alliance, and International Tang Soo Do Federation. He also holds ranks in several other styles in his search to be a well-rounded fighter. Ron has been married to Gaming Trend Editor, Laura Burke, for 21 years. They have three dogs - Pazuzu (Irish Terrier), Atë, and Calliope (both Australian Kelpie/Pit Bull mixes).
Related Articles: DJ Hero 2
Share
Tweet
Share
Submit