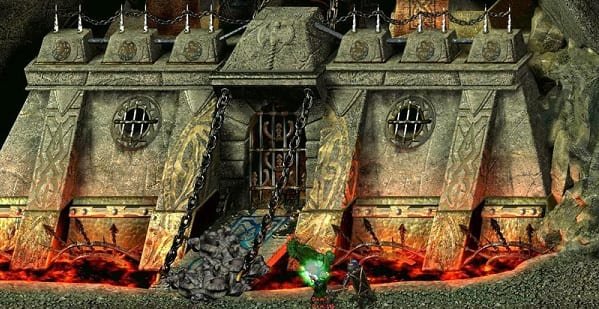 When first I received a copy of Divinity Anthology, I was fairly excited about it.   I’d just had a fantastic experience revisiting Faerun in Baldur’s Gate: Enhanced Edition, so I was slavering for more deep RPG worlds to mess around in.  I’d heard Divine Divinity was an absolutely massive game, and I’d seen it on several “Best Of” lists, so I thought I was in for a treat.  Divinity II caught my attention when it first came out because it mixed an RPG with a dragon combat game, which had my blood pressure up a bit.  Would the collection of massive loot-driven dungeon crawling RPGs hold up a decade after it began?

I want to start on a high note, so first I’m going to talk about graphics. All three of these games are actually nice to look at, especially when taken in context of their release dates. Divine Divinity and Beyond Divinity look old, but they’ve aged with some dignity. Sprites and backgrounds are a bit blocky, but honestly it really makes you feel like you’re playing an old-school game—which, of course, you are. Character models are actually pretty nice as well, with both games showcasing all your fancy new equipment nicely. To top top it all off, the maps are enormous. You can walk for what feels like forever before hitting the edge of the map in some instances, and this is a really great feeling in both of the earlier games. Both games could go for a bit more color, though, as levels tend toward palettes of muted grays and greens.

[singlepic id=10154 w=320 h=240 float=left]Divinity II came out almost half a decade later, and it really shows. It trades the 2D isometric perspective of its predecessor for a shockingly beautiful 3D world. I hate to resort to cliches but frankly I can’t think of any other way to say it: Divinity II looks like a painting. The designers clearly took a lot of artistic influence from the Impressionist movement, because leaves, reeds, and landscapes are all drawm in broad strokes in lush saturated colors. The lighting is pretty good, as well, especially out in the daylight, though it would be nice if you could turn down the bloom a bit. What the maps gain in beauty they lose in size—this isn’t an Elder Scrolls game by any stretch of the imagination. All in all, while Divinity II doesn’t have quite the visual scope of a game like Skyrim, nor the production values of a Dragon Age, it’s still pretty beautiful to look at.

Audio in all three games is a bit of a mixed bag.  Divine Divinity has some really great environmental audio–water dripping in caves, birds twittering in forests and so on–and great music.  On the other hand, the voice acting is pretty bad, and it gets even worse in Beyond Divinity.  Larian is based in Belgium, and I don’t expect top-notch voice work, but it’s so bad that it’s distracting.  Your best bet is to simply disable voice in both games and simply read the text.  Divinity II has much better voice-overs, but the music and the environments don’t have quite the same rich character as they do in the earlier works.  It’s one step forward, one step back.

Character creation is fairly limited in all three games, though the level up system allows you a bit more freedom when designing your character.  In Divine Divinity you’re allowed to chose a starting class and sex. That’s basically it. Beyond Divinity and Divinity II both allow a lot more choice in creating your character, though neither is anything like a triple-A RPG like Dragon Age or Skyrim. Divinity II even has a mechanic allowing you to change your characters appearance at certain vendors. The real flexibility in character creation comes with the level up system. All three games use a system where level-ups reward you with a few points to distribute between the main stats of the game—RPG standards strength or intelligence. The system is generally fairly flexible, though you’ll want to specialize in one or two slots areas instead of being a generalist.

[singlepic id=10155 w=320 h=240 float=right]A bit earlier I called Divine Divnity a Diablo clone but to be honest that might be selling it a bit short.  It’s just that the game starts very slowly.   The the first four or five hours take place in a single town and a pair of dungeons, but afterwards the game opens into a positively enormous world full of angry orcs, friendly solders, and hidden temples. Gameplay is your standard hack and slash affair—left click to move, attack, interact, etc. Most special abilities area accessed by mapping them to the right click, which makes it awkward to use more than one spell or ability in succession. Some kind of hotmapping would have been nice, but the omission isn’t gamebreaking. The game is very sparing with life and mana replenishing potions. This serves to keep the difficulty up, ensuring that you’re never marching through the dungeons. On the other hand, I found myself having to run up to the surface far too often. The levels are designed with some shortcuts back to the top of the level, but it’s still frustrating to have to trek all the way out of the dungeon.  The game also seems to reward certian classes more than others. I tried playing as a super intelligent mage-type, but eventually found that I could neither equip decent arms and armor, nor did I have enough mana to rely on my magic for protection. This essentially limited my abilty to wander far from an inn, which was a bit frustrating. There are some problems with the interface as well. The map screen is strangely hard to find—pressing the obvious M key brings up a useless minimap, instead of the full map you really want to see. The inventory screen was a mess, which made item management a nightmare, but the quest log was fairly useful. All in all, though, Divine Divinity is a fairly good game, but not a great one

Beyond Divinity, on the other hand, is a mystery to me.  It is an impenetrable enigma sealed off by an awful control scheme. It tries to mix the single-player dungeon crawling feel of the first game with the kind of party management of a game like Baldur’s Gate, but the developers seem to have missed what made that game’s combat manageable: the ability to select all the party at one time, and to set conditions for autopausing. This allows you to move the party easily while maintaining control. Larian instead tried to carry an identical control scheme over from the previous game, to calamitous effect. Instead of a simple drag-select to select the entire party, you have to control each member individually, switching frantically between them. This game came out in 2004—the ability to drag-select is almost unforgivable. The left-click to interact, right-click for special abilities mechanic survives the transition as well, much to my dismay. It’s basically impossible to control two characters at once in this game unless you’re absolutely spamming the pause button. I have to be honest here: I didn’t play this game a lot. I tried, because I wanted to see more of the interesting level design, and there is an interesting storyline concerning two sworn enemies who have to work together to survive, but the control scheme was just unendurable.

I will admit that part of the problem here is that I lack the context to really understand Divine Divinity and Beyond Divinity. Though they’re contemporaries of classics like KoToR and Morrowind, these games are clearly throwbacks to an even older generation of RPGs like Diablo or the Ultima series–neither of which I have experienced (they came out when I was very young).  Everything about them proclaims that, from the old-school graphics to the antiquated inventory system.  Maybe a person with fond memories of those games would be better able to relate to these earlier Divinity games, but I think they’d still be hard pressed to deal with some of the quirks of the control schemes used in both games.

[singlepic id=10152 w=320 h=240 float=left]Fortunately, the latest entry in the series returns to a more tolerable form. Divnity II’s story focuses on a young Dragon Slayer who finds himself/herself turned into a shapeshifting Dragon Knight—the very creature they were sworn to destroy. You might expect there to be a lot of introspection and soul-searching in a storyline like that, but you’d be wrong. The protagonist accepts everything with the same blank complacence, which is a bit disappointing.  Gameplay is divided between time spent as a knight, and time flying around as a dragon. Combat as a human is fairly generic—not bad, but not anything special either. Divinity II does have some instances of really interesting creature design, which helps to keep the game interesting. Draconic flight is a mixture of a rails shooter and . It’s fun to zip around the map as a dragon, but draconic combat never really felt all that deep.  However, the biggest problem here is the pacing.  In the first 10 hours of the game you’ll barely get so much as a tease of your draconic powers, and this was supposed to be one of the game’s big selling points!

All in all, it’s been  a challenge to write about the Divinity Anthology because while there is a lot to like here, there’s a lot to hate as well. It seems that for every new feature or interesting idea there is a conflicting problem or bizzare design choice.  Divine Divinity and Divinity II are decent , but they aren’t spectacular. Both offer a lot of content for those who can get past their sluggish early sections. Beyond Divinity isn’t any fun whatsoever, and you’d really be better off passing on it unless you’re really a fan of Larian’s work.

One problem I had with all three of these games is that I found my mind drifting to other, RPGs like Baldur’s Gate or the Witcher 2.  Now that I’m finished  I have no desire to jump back into them, and I suppose that really says it all.