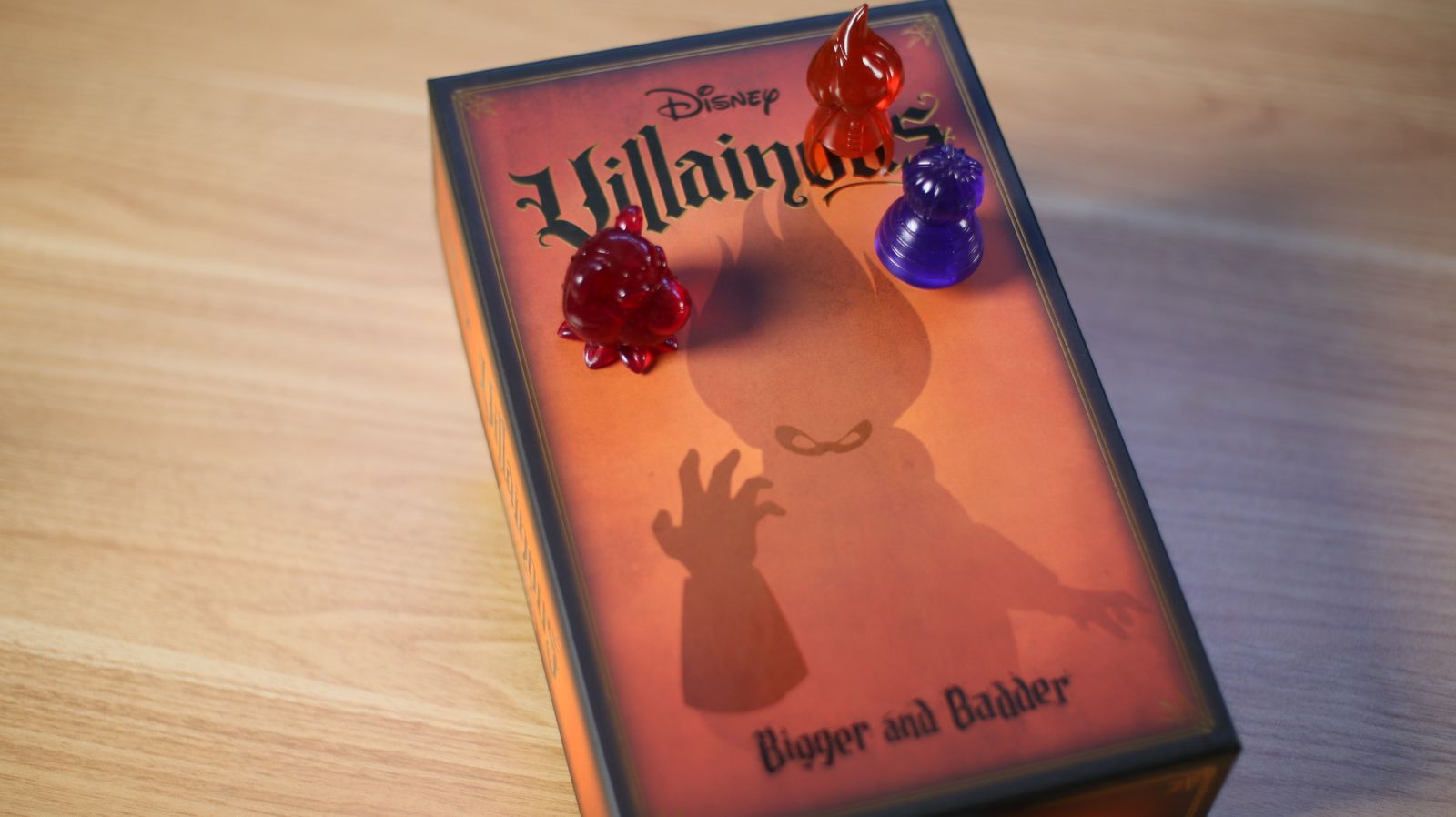 With six expansions under its belt, you’d be excused for thinking that the “Bigger and Badder” expansion for Disney’s Villainous is just going to be more of the same. I’m happy to say that developer Ravensburger has switched things up for the better for this time around. After the initial strain of learning some new mechanics, I think it just might contain some new favorites among the whopping 21 villains we now have at our disposal. Let’s get it out of the box and see what’s new.

The most important thing you’ll want to know about the Bigger and Badder expansion is which new entries into the rogue’s gallery you have to look forward to playing. Once again Disney heads into the vault for evil-doers that you might not expect – Lotso, the primary antagonist from Toy Story 3 that gave us all nightmares with his Caterpillar Room death furnace, Syndrome who proudly proclaimed that “If all of us are special, none of us are” and then set about to make it so, and your wildcard entry – Mad Madam Mim from Sword in The Stone. 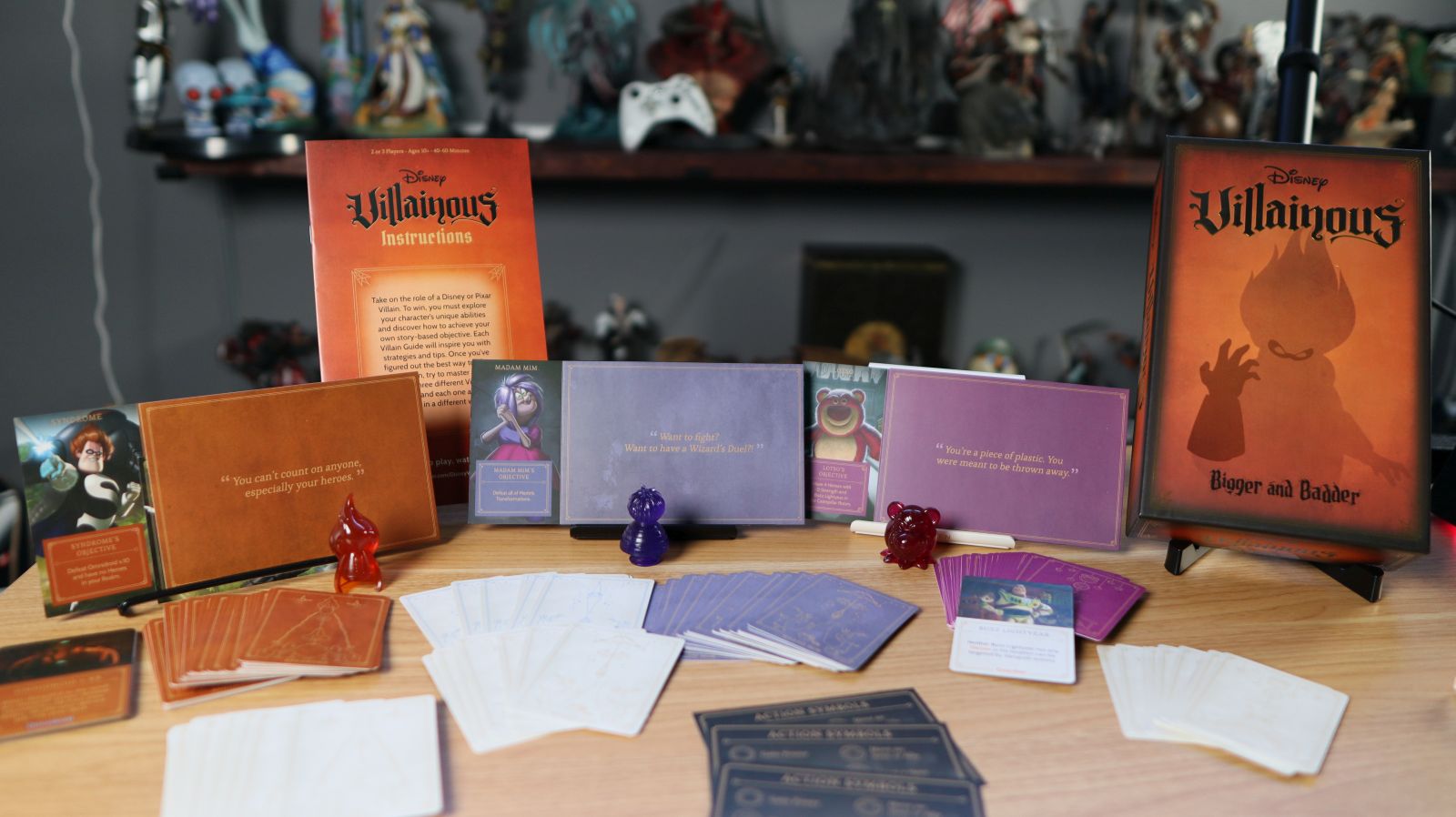 While this expansion can be played 3 player standalone, you can also mix and match with any of the previous expansions or the base game for up to six players. We played our games with four players, meaning one person had to dig into the Villainous archives to dredge up a bad guy to play with us. Since the game is effectively playing against your own board, and less about playing directly against your opponents, this works out quite well. Your objectives are your own, and the disruption mechanic isn’t really changed by introducing new characters. If you are new to the franchise, Fates are what allow you to cause havoc for the other players, and it’s the only mechanic you have at your disposal to do so. When your player mover lands on a space on your board that has a fate icon, you can force any other player to present their top two fate cards. You can select which one you want to inflict on them (usually a hero that will attack their defenders, or status effects that disrupt their gameplay mechanics, or both!), and where to play them. Covering the top part of their board may deny them critical resources like power or the ability to fate you. Only by defeating that hero or removing that fate element can the player restore access to those resources, so they are a bit important to the overall flow of gameplay.

Kicking things off, let’s talk about what is clearly the primary villain here (based on the box color and artwork) – Syndrome. The main villain of the original Incredibles movie, this Disney Pixar foe is all about destroying the Omnidroid v.10. Standing in your way are, of course, the Incredibles and their friends, including Mr. Incredible, Dash, Violet, Jack-Jack, Frozone, and more. Syndrome’s win condition is that he must destroy the Omnidroid v.X8, then draw out and destroy the upgraded Omnidroid V.X9, and finally draw out and control the Omnidroid v.10 while there are no heroes in his realm. 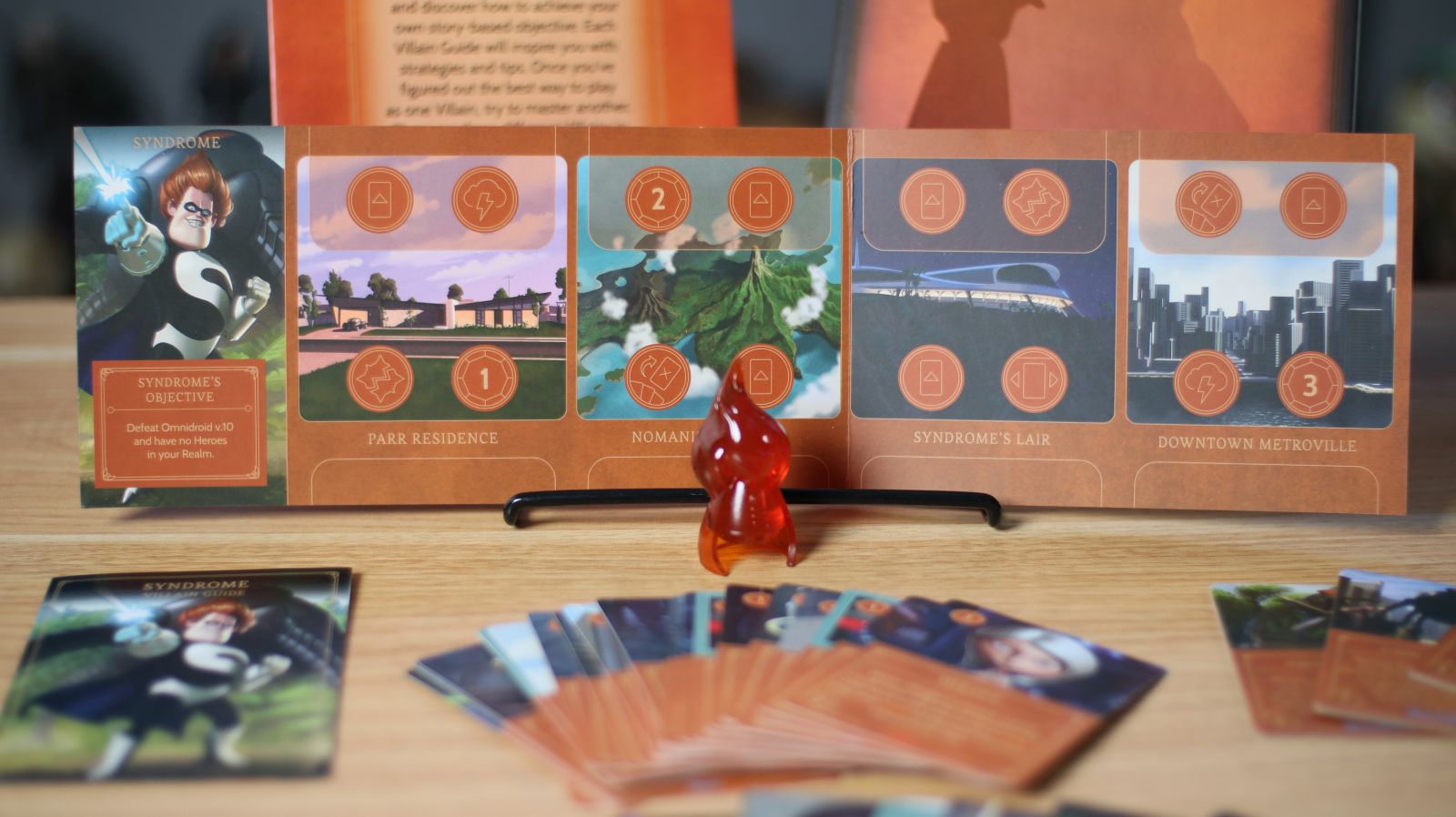 You’ll start with the Omnidroid V.X8 so you won’t have to draw him out. Instead, you’ll use a vanquish action to pit him against a hero to destroy him. Upgrading to the Omnidroid v.X9 requires that you play and then clear “Major Modifiers” cards. You’ll need one to bring out the v.X9, and three to bring out the V.10. The 15 Years Later card allows you to sift through your fate deck until you locate a hero. When you’ve also located and played the Syndrome’s Remote card (the space that gets this card also gains an activate icon in the process), you’ll be able to win the game once it occupies the same space as the V.10 and all heroes are removed from the field. The trick comes from the fact that the V.10 is spawned on the hero side of the board, and any subsequent heroes that are spawned steal the remote from you!

On your side, you have a variety of henchmen and henchmen modifiers (Guards – the “Inept” part is implied) such as Zero-Point energy that will drain a hero’s strength by -2, stunning them in place. It’s about getting the heroes in the right place at the right time, and making them destroy the Omnidroid on your behalf. Another card called “15 years later” lets you draw out heroes to fight against you Omnidroid, making the primary method of winning with Syndrome being cycling your cards as fast as you can and controlling the battlefield. It was a little more complicated than any other villain from the other expansions, but once I got the hang of it, it was incredibly satisfying – enjoy that pun.

Next up you have Lotso – the stuffed plushie villain from Toy Story 3. Short for Lots-o-Huggin’ Bear, this magenta-colored monster wants to imprison and destroy any rulebreakers in his realm, putting them in a place called The Caterpillar Room. I can imagine this movie scarred a lot of kids just as much as it scarred me as an adult. 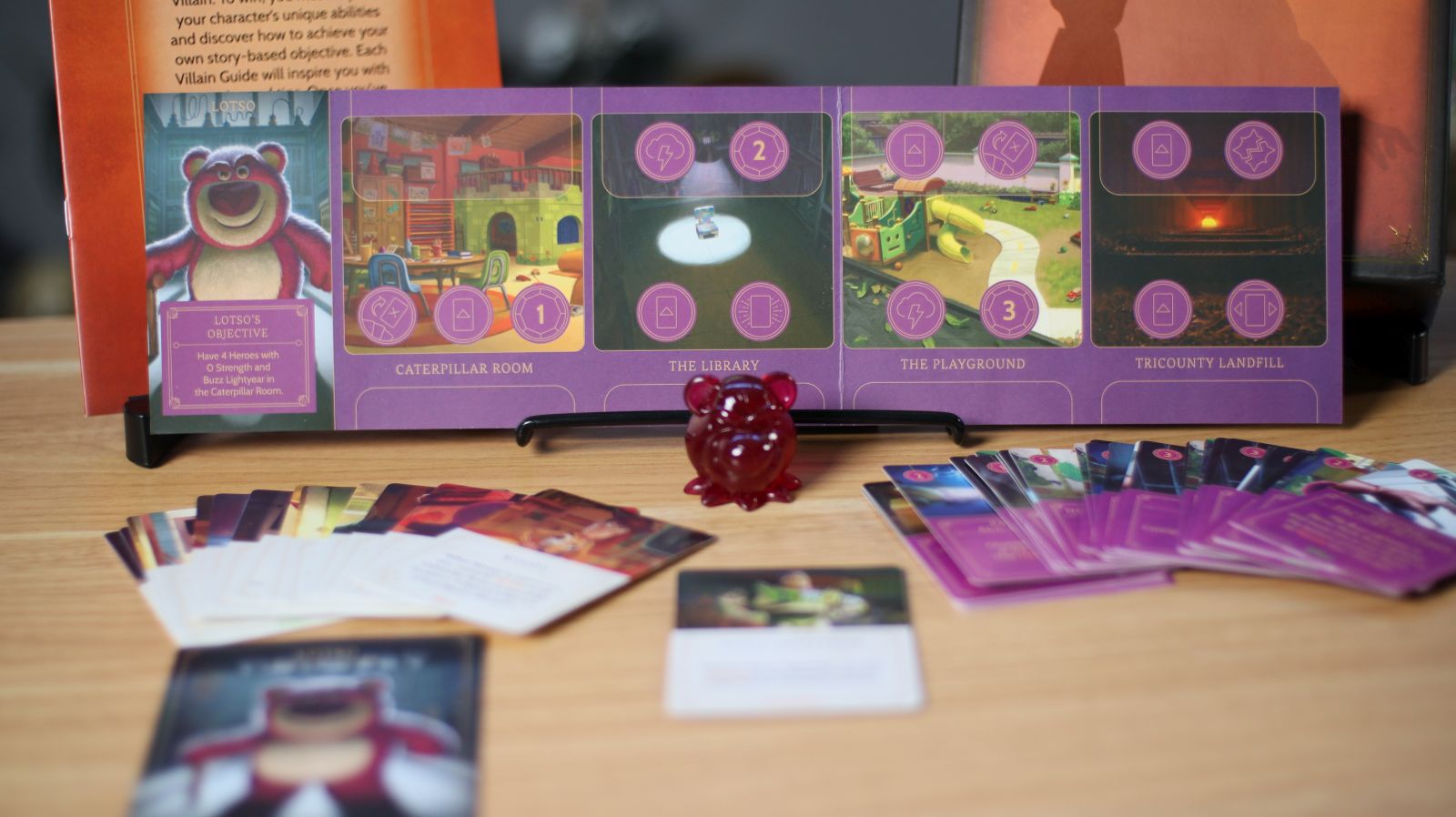 Woodie, Jessie, Rex, Hamm and others make an appearance on the Hero side for Lotso. Buzz Lightyear is a special cardboard token card, and his mechanics place him as a two-sided hero that lines up perfectly with his role in Toy Story 3. On one side of his card he is “Demo Mode” Buzz Lightyear, and any foes he defeats are sent to the Caterpillar Room. On the other side is his guardian mode, making it impossible to target him or any other heroes that are in his location, with Vanquish actions. The objective is to capture four heroes, get them into the Caterpillar Room, and reduce their strength to zero. Supporting characters in your deck like Stretch do exactly that, allowing Lotso to move Heroes or Guardians in his location to any other location.

As in the movie, Buzz is the key to this deck. Any time he moves down to the bottom half of the board he siphons away 1 strength from any hero in the top realm. Cycling Buzz to Demo Mode as frequently as possible should be your goal if you play Lotso. Similar to Syndrome’s “15 year later” card, Lotso has a “Welcome to Sunnyside” card that has him revealing cards from his Fate deck until he finds a hero to place. Defeating them is the goal, so once again it’s about controlling the battleground. “Smells like Strawberries” allows you to shuffle your discard back into your deck, helping you get valuable cards, adding a deck cycling element. He’s easier to play than Syndrome in terms of overall mechanical complexity, but still very much pick up and play. 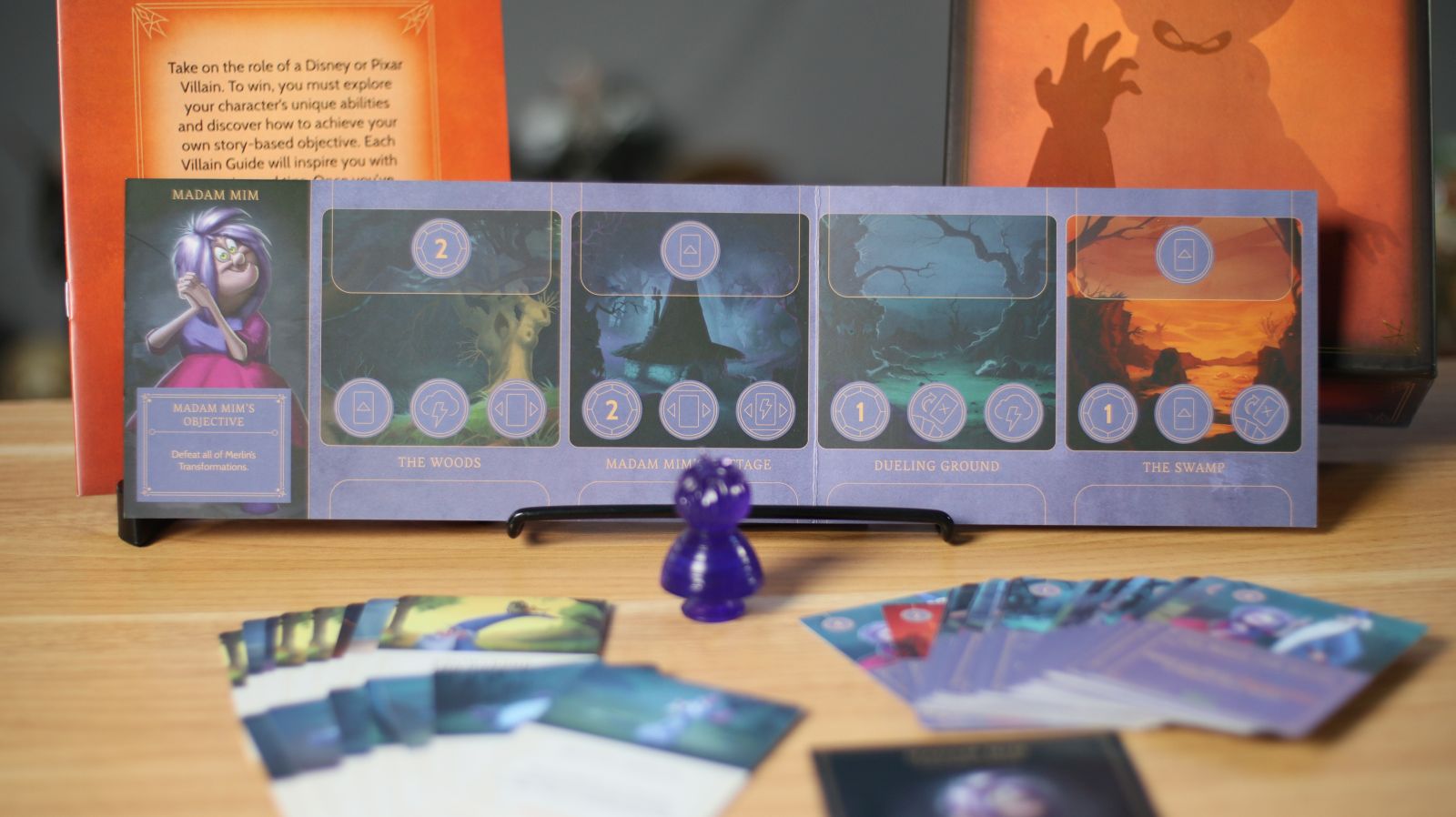 The last new villain is Madam Mim from The Sword in the Stone. She has fate cards like everyone else, containing familiar faces like Merlin, Wart, and Archimedes, but unlike other villains, she has a second white deck. These contain Merlin’s various transformations, and her ultimate goal. Her job is to defeat all of the various transformations that Merlin has laid upon her, starting with the pre-placed Turtle Merlin that is located in the Dueling Ground on the board. Walrus, Caterpillar, Rabbit, Mouse, Crab, and Goat Merlin join the ranks of possible transformations, and you’ll need their corresponding Madam Mim form to defeat them. This means you’ll need to, for example, be Purple Dragon Mim to beat Goat Merlin, or Fox Mim to beat Rabbit Merlin. You’ll need to clear all of these cards to win, and these cards replace the heroes you’d normally be battling. It sounds like an easier objective, but it’s surprisingly not. Since you need the corresponding “rock” to beat the “scissors” you’ll have to cycle through all of your cards repeatedly to eventually defeat them all. Once again, we have a character dependent on cycling their cards quickly, and their character cards are designed accordingly. In practice, we found that Madam Mim is the easiest of all of the villains to play, with her mechanics being simpler to understand, even for beginners. 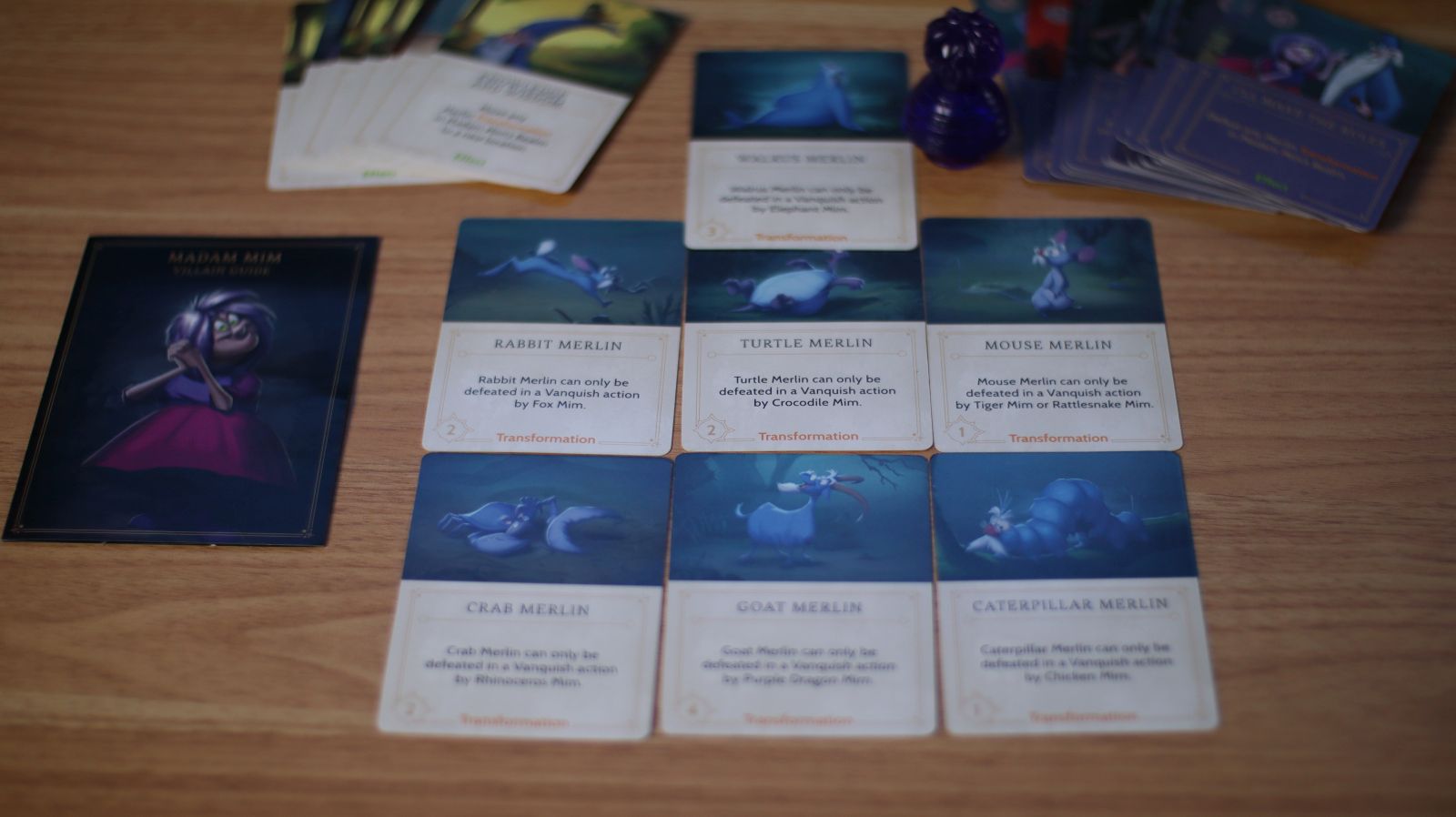 As is the case with all of the previous expansions, each character has their own board and instruction booklet to explain how they are played. Also included are -1 and -2 power tokens as you’ll need those for both Lotso and Syndrome to power down their heroes. The boards here have more in common with some more recent expansions, with some locations having three actions on bottom or top, such as the one for Madame Gothel from the Perfectly Wretched expansion.

I was surprised to see Lotso was not a bear head silhouette, instead depicting the cuddly villain with his actual head. Every other character has some sort of vague representation that is immediately recognizable in profile. Lotso is just literally his head, with all the detail you’d expect. It’s not a negative by any stretch, but something I noticed. 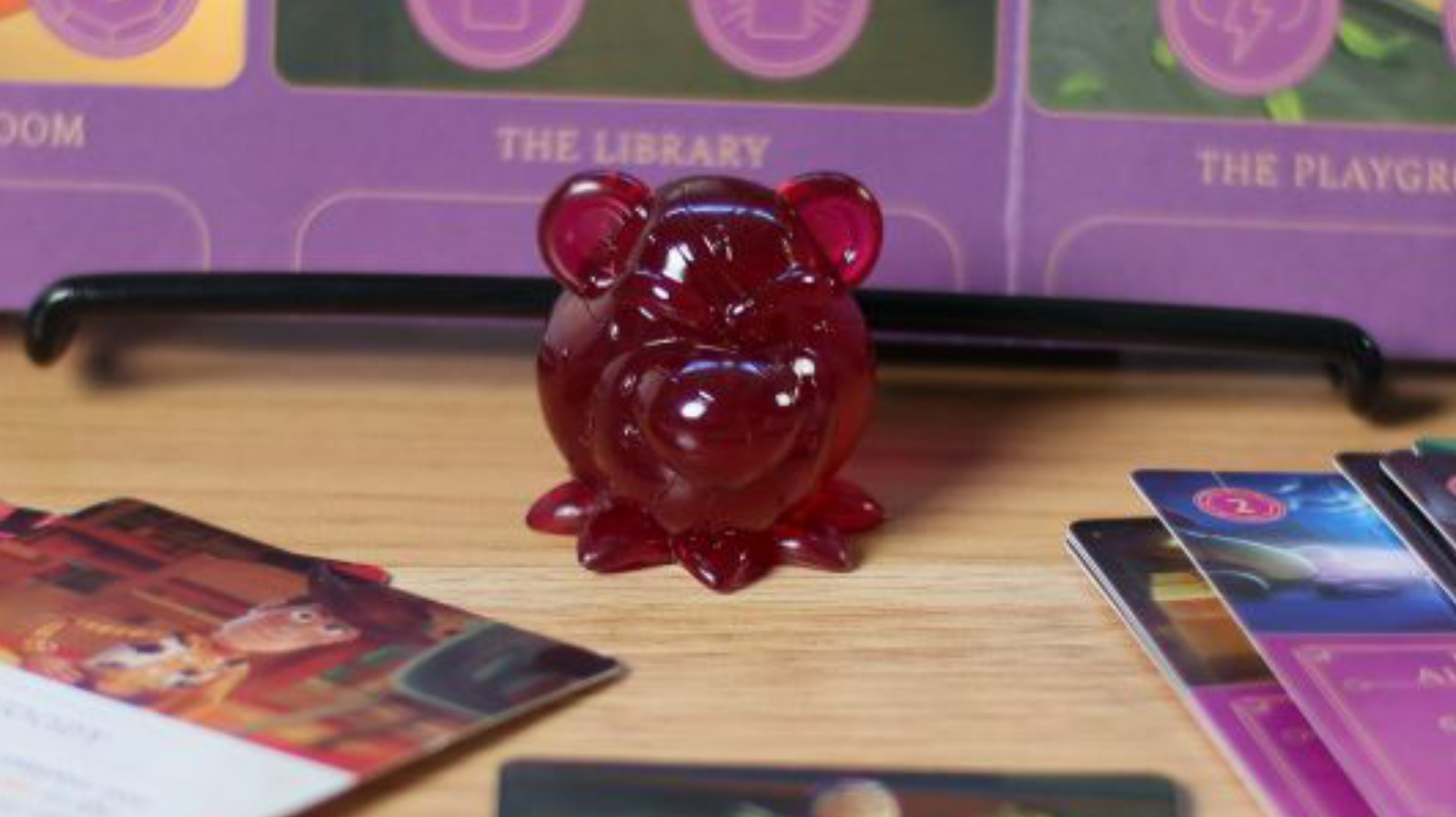 Ultimately, it’s easy to recommend Bigger and Badder as it fits perfectly in the larger pantheon of Villainous expansions. The new mechanics make everything feel fresh, and it’s good to see Ravensburger try something new after the game has been on the market this long. I’d like to see more Pixar villains, but with a catalog as big as Disney has, the sky’s the limit.

Three new villains and three new sets of mechanics, the Bigger and Badder Expansion fits neatly into the already-established Villainous universe. While Syndrome and Lotso may be complicated on the surface, you’ll have them down pat in a single playthrough, with Madam Mim offering a simpler and more entry-level game. It’s hard to go wrong here.

Ron Burke is the Editor in Chief for Gaming Trend. Currently living in Fort Worth, Texas, Ron is an old-school gamer who enjoys CRPGs, action/adventure, platformers, music games, and has recently gotten into tabletop gaming. Ron is also a fourth degree black belt, with a Master's rank in Matsumura Seito Shōrin-ryū, Moo Duk Kwan Tang Soo Do, Universal Tang Soo Do Alliance, and International Tang Soo Do Federation. He also holds ranks in several other styles in his search to be a well-rounded fighter. Ron has been married to Gaming Trend Editor, Laura Burke, for 21 years. They have three dogs - Pazuzu (Irish Terrier), Atë, and Calliope (both Australian Kelpie/Pit Bull mixes).
Related Articles: Disney's Villainous: Bigger and Badder Expansion Review
Share
Tweet
Share
Submit