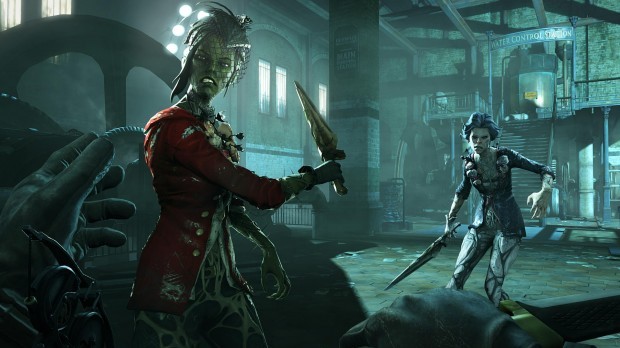 Dishonored: The Brigmore Witches is the second part of the story that began with The Knife of Dunwall, as players return to the dark utopia that they know and love, re-entering the shoes of the anti-hero Daud. Whereas the previous DLC gave us a bland look at Daud, and a somewhat unfocused mystery to solve, The Brigmore Witches (TBW) returns with a more conflicted Daud and a much more focused story to enjoy.

[singlepic id=15290 w=320 h=240 float=right]Those who have enjoyed Dishonored will remember Daud as the villainous assassin responsible for the Empress’ death and Corvo’s downfall, but the recent DLCs have tried to paint this antagonist as a more complicated individual who now seeks redemption for the part he has played in the events of Dishonored. The story picks up where The Knife of Dunwall left off, with Daud now in full pursuit of Delilah, the witch he now blames for his errors. Most of the story involves Daud preparing for his assault on the witches, which have Daud assembling a crew and boat to sail to them, and then finally confronting the witches themselves and having his revenge. The former is more of the same we’ve seen from the Dishonored series, with only a few minor tweaks, but the latter breathes fresh life to a series that is already a joy to play. Probably the best improvements over The Knife of Dunwall are the story, which now features a much more interesting portrayal of Daud, and a plot that is much more focused than its predecessor.

Players will not have much to learn if they’ve already experienced Dishonored, as the core remains unchanged. You play an assassin who uses the occult and more mundane means to sneak or fight through stages that demand increasing skill to overcome. That said, there are some elements that make the DLC a unique experience, such as having an assassin army at your disposal and favors available to purchase (both of which were introduced in The Knife of Dunwall). There are also some new powers and weapons, such as the “Pull” ability (a telekinetic power that allows Daud to draw items and enemies into reach), and stun mines which do exactly what you think they do. The game is still all about finding your unique way of completing each stage, and your actions ultimately have an impact on how sections of the game play out.

[singlepic id=15292 w=320 h=240 float=left]The first half of the game is more-or-less in line with what players have come to expect from the series, but the second half switches things up, as witches and their undead hordes are introduced to great effect. These new enemies and their terrifying magical abilities tie in well with the ruined manor that Daud must infiltrate. Witches vanish in thin air and reappear behind you, and hounds circle you and go in for the kill. It all makes for a very welcome change of pace. The final confrontation with Delilah doesn’t disappoint and serves as an appropriate conclusion to Daud’s quest, but the end to Daud’s story, which involves spoilers that I won’t discuss, isn’t so good. Without going into details, your actions throughout the DLC will have an effect on Daud’s final fate, but your actions in the main Dishonored game will not when they probably should (I know I’m being cryptic, but trust me–it’s a bit of a cop-out).

[singlepic id=15291 w=320 h=240 float=right]Everything else you’d expect from Dishonored is here–the visual presentation looks great, the ambient music fits in well, the controls have never been easier to use, and the stealth vs. assault mechanics remain entertaining and challenging. The addition of a few powers and weapons, ability to buy favors, and new enemy types are all welcome to liven up a good formula, but the DLC’s conclusion, and failure to add much new to the series hold this DLC back from being great.  One of the more disappointing points in the game is the beginning, wherein players are forced to revisit one of the levels that they already enjoyed in the main game. While the return is done well, it felt cheap to reuse a level when the DLC doesn’t have many levels to begin with.

The Brigmore Witches was a lot of fun, and for $10 fans have little to lose by playing it themselves. All of the core elements that made Dishonored great are still here, but nearly a year after the game’s release, players may have come to expect more than the few unique experiences that were offered in this shortlived DLC. I beat The Brigmore Witches in just about four hours, but I used stealth throughout the entirety of the DLC, and my violent playthrough so far is different enough to be worthwhile trying again, so at least there is some replay value. In the end, those who enjoyed Dishonored will probably get a kick out of The Brigmore Witches, and those who got what they needed out of the main game have few new experiences to find here.