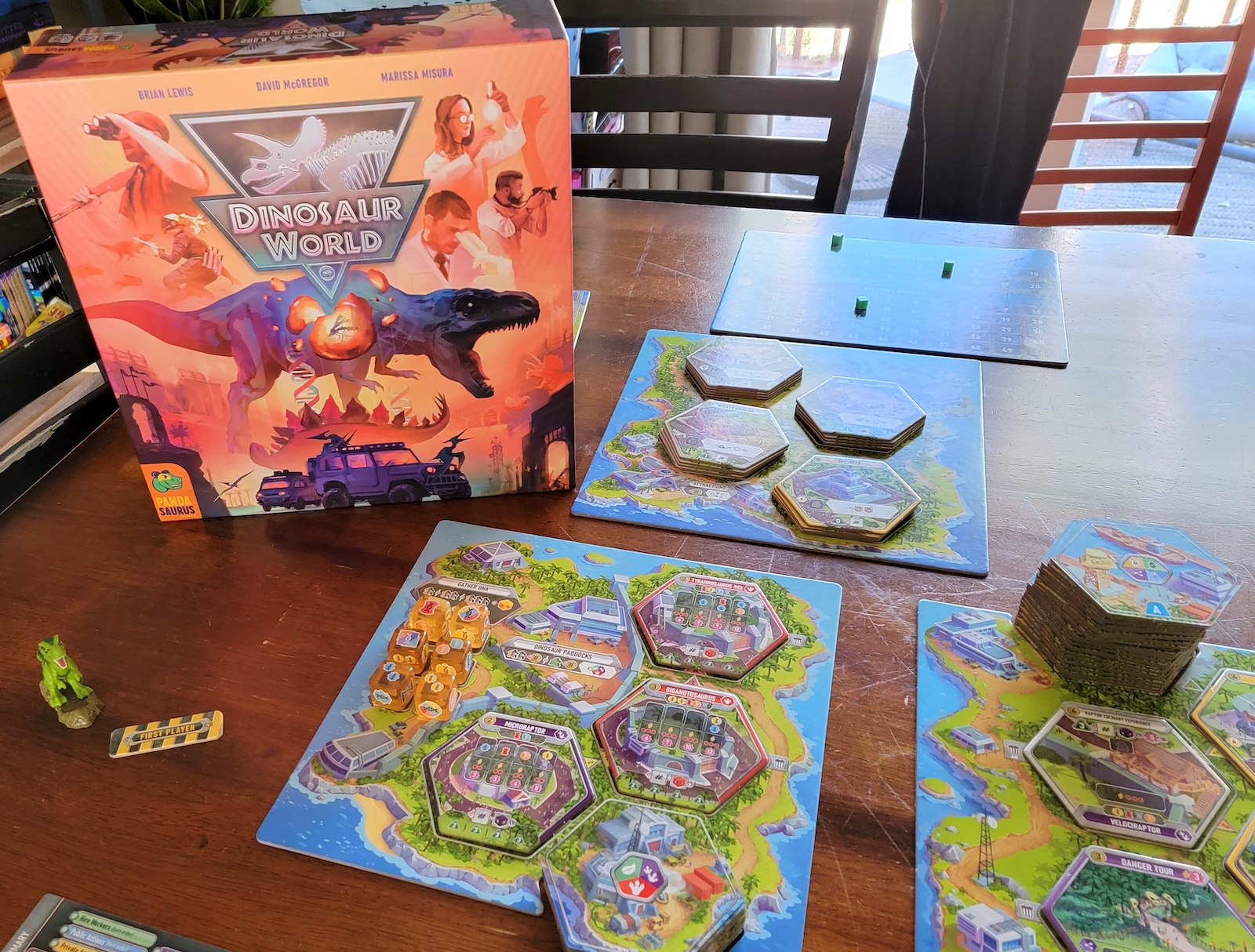 Dinosaur World is a medium weight worker placement, tableau building experience that blends elements of Suburbia and many other worker placement games. This game makes the focus all about being the best new Dinosaur Park Manager and really excels at rewarding those willing to take risks, but also punishing them for being too risky. With 2-4 players and an estimated game time of 60-120 minutes, Dinosaur World does not disappoint. Within the game you buy new attractions, acquire different types of DNA, hire workers that excel at different actions, create dinosaurs, and lastly give “Jeeple” tours of your park to determine its viability via excitement and be awarded victory points. Through all these the goal of Dinosaur World is to see whose park is the most successful and the most exciting after 5 rounds. 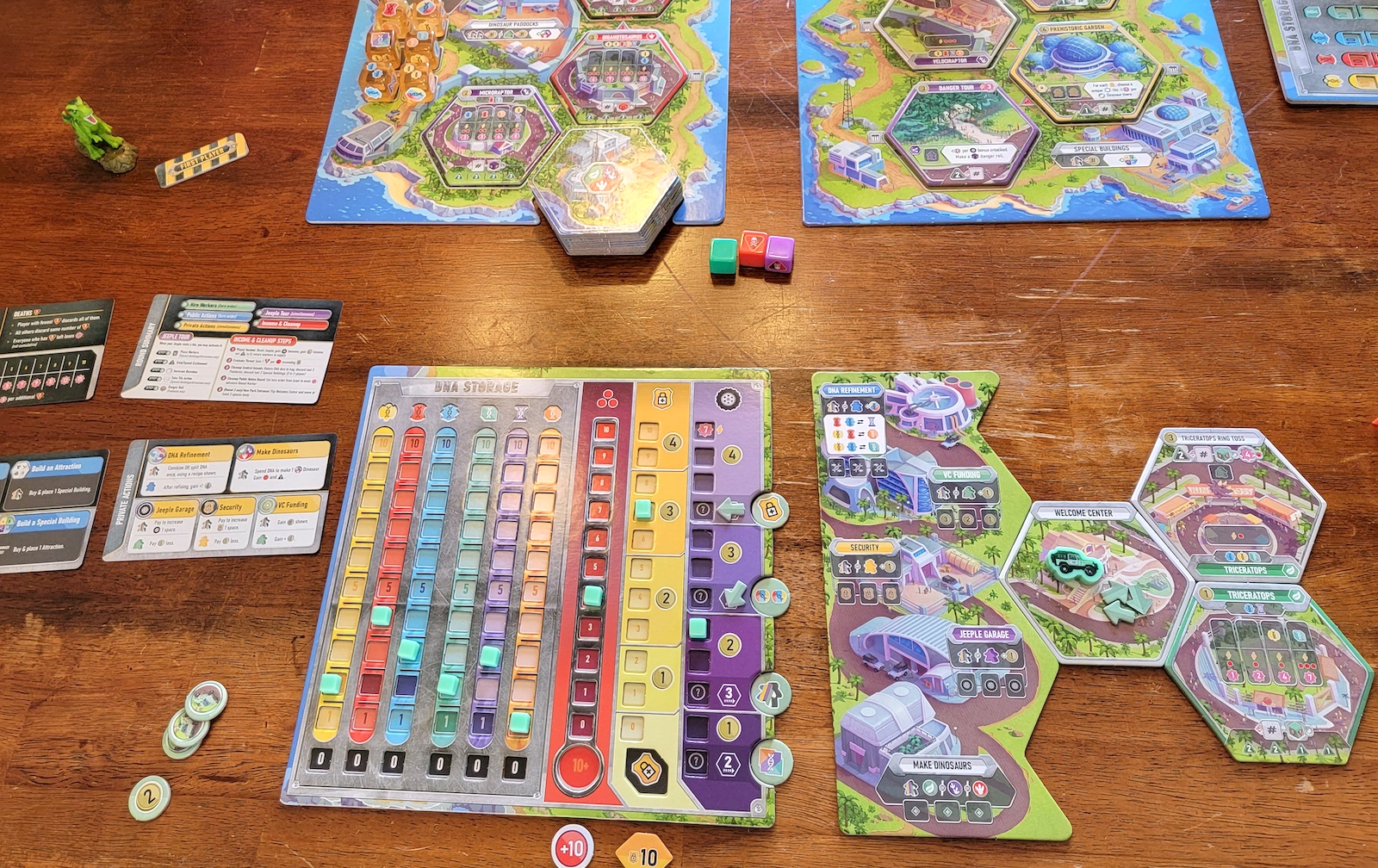 At the start of the game, players draft from a set of building tiles to start their new dinosaur park. To begin the game players will have a single dino paddock, an attraction, and each player starts with the same “Welcome Center” tiles. Dino paddocks are largely influenced by the different types of dinosaurs you can create on them. green being herbivores, purple being small carnivores, and red being large carnivores. Each time you create a dinosaur from the required DNA you are typically awarded points; herbivores give you the least but are easier to create, small carnivores are slightly harder to create but give a modest amount of points, and large carnivores are the hardest to create but certainly reward you with big points. The question you might ask is why someone wouldn’t go right for large carnivores and that is where threat comes in. In addition to awarding victory points for creating dinosaurs in a paddock, you are also generating a threat.

Threat is how the game forces players to make strategic decisions. If your threat is higher than your park’s security, then at the end of a round you acquire death tokens for dinosaurs taking advantage of the weak security in your park and having up close and personal visits with your park’s guests. Death tokens award negative points at the end of the game, so while you might have a lot of dinosaurs which have given you a lot of points, you might wind up having too many death tokens taking away a lot of those points. 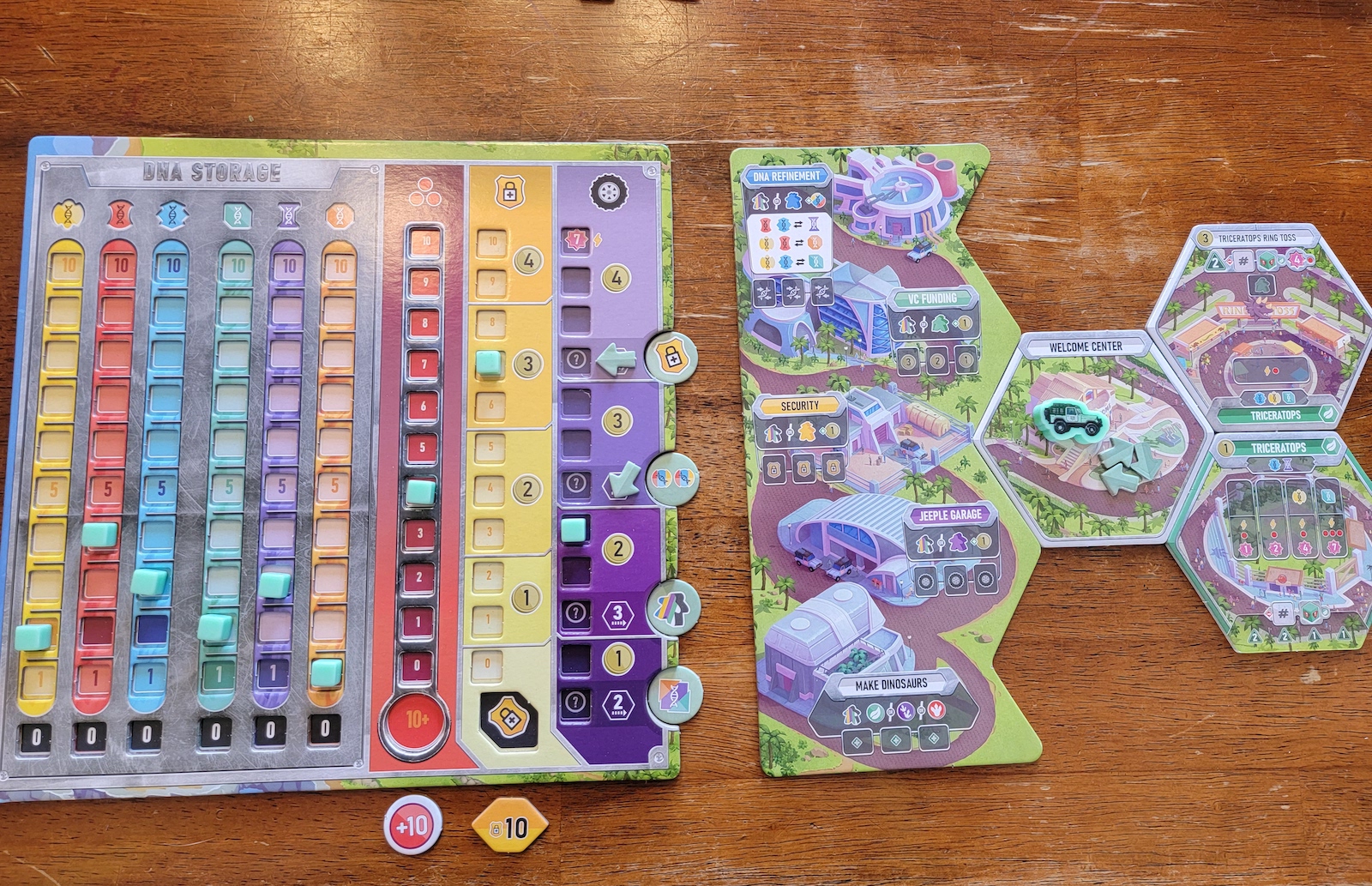 On the other hand, attraction tiles typically reward you with points, or provide an action that can be taken on your jeeple tour with specified workers. Tiles must be placed next to the Welcome Center and dino paddocks can never touch another paddock. After drafting is all said and done the players move on to the game itself. First players will hire workers, next they will use those workers to take public actions, followed by private actions, then the jeeple tour, and finally income and cleanup.

With a unique way of acquiring workers, Dinosaur World offers a refreshing and strategic take on typical worker placement conventions. Cards are drawn from the worker database deck equal to the number of players plus 1. In turn order players choose one of the available worker database cards to acquire their workers for the round. Each card has unique amounts of different workers on them while all of them also all have 4 generic workers to be used for most actions. After acquiring your 9 workers from the worker

During the public actions phase, all players get to choose 1 of 4 public actions to take and whether to spend all their workers or save them for private and jeeple tour actions. Public actions include Gathering DNA, Building a Dino Paddock, Building an Attraction, and Building a Special Building. To gather DNA, you use 1-3 workers and take one of the DNA dice rolled during the round and acquire that much DNA multiplied by the amount of workers used. Building an attraction, dino paddock, and special building all require you to spend an amount of money printed on the top of the tiles, and then you place it in your park as long as it’s next to another tile of yours. After all players have finished taking all the public actions they want and everyone passes, play continues to the next phase in the round: private actions. 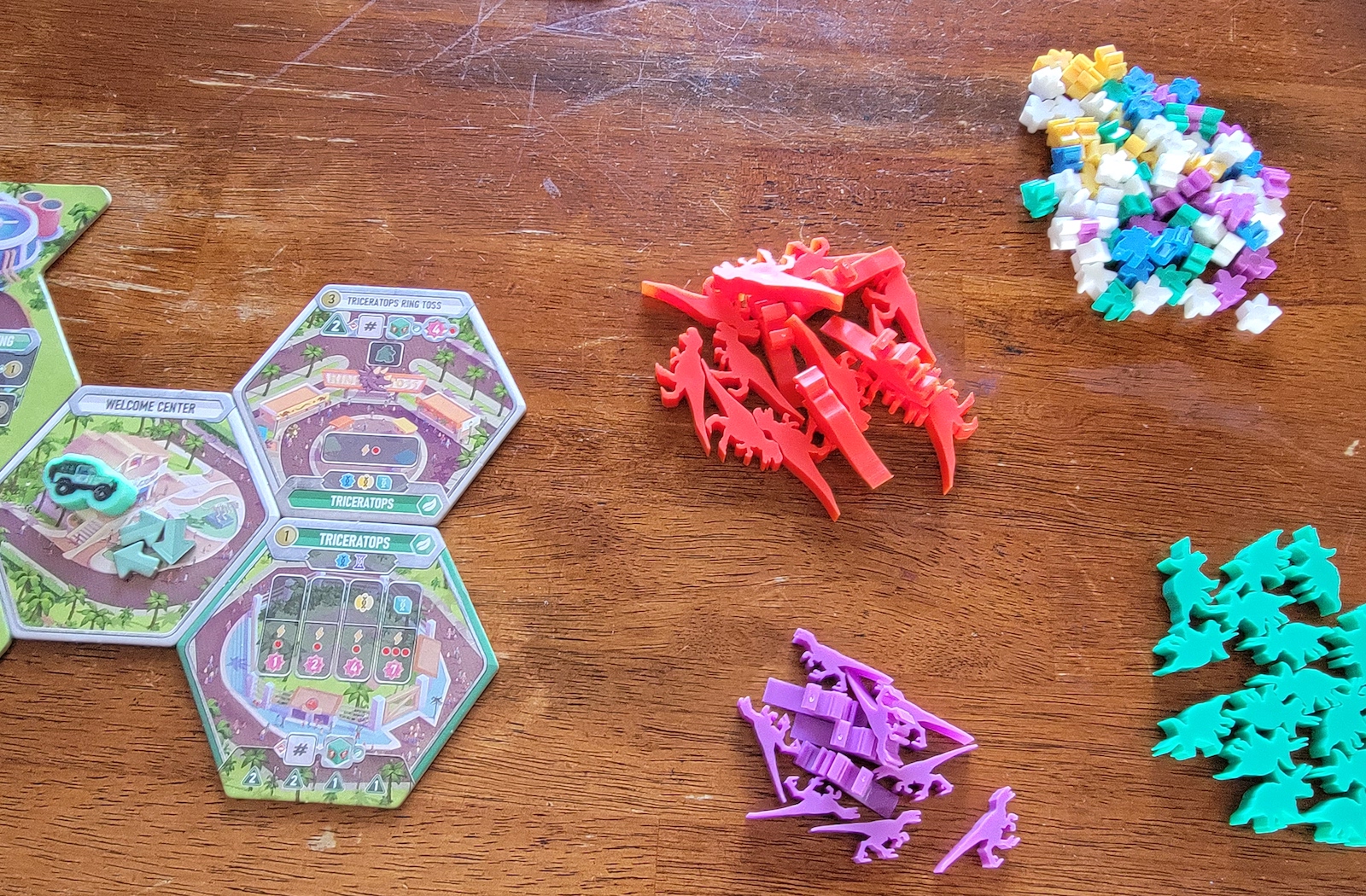 Private actions are taken simultaneously during the phase. Each player has their choice of 5 different actions to help create a better park. With different actions such as DNA Refinement, Making Dinosaurs, Jeeple Garage upgrades, Security upgrades, and VC Funding, there is no shortage of different strategies players can utilize. With DNA refinement players can manipulate the DNA they have so that creating dinosaurs can be done if they weren’t able to with the DNA they acquired previously. Making Dinosaurs consists of meeting the DNA requirements from the paddock, creating a dinosaur of that type, then you earn points and threat. VC Funding awards money just for visiting the space with a worker, Security upgrades increase the level of security in your park to meet the threat level of the dinosaurs. Lastly, Jeeple Garage upgrades allow you to gain bonuses every round if certain tiers are passed and allow your jeeple to travel further in your park, increasing the excitement you generate which increases the money you earn at the end of a round.

After everyone passes, players move on to the Jeeple Tour phase which is also taken simultaneously. Players use the arrow tokens in their parks and, starting at their welcome center, travel to each space in the sequence(at the beginning of the game its 3 spaces total). After a player either uses a space, the attraction starts to get boring to the park’s visitors and excitement goes down every time an attraction or paddock is visited. This causes income to drop in what is a delicate balance of using attractions sparingly but getting the most out of each different tile placed in your park. 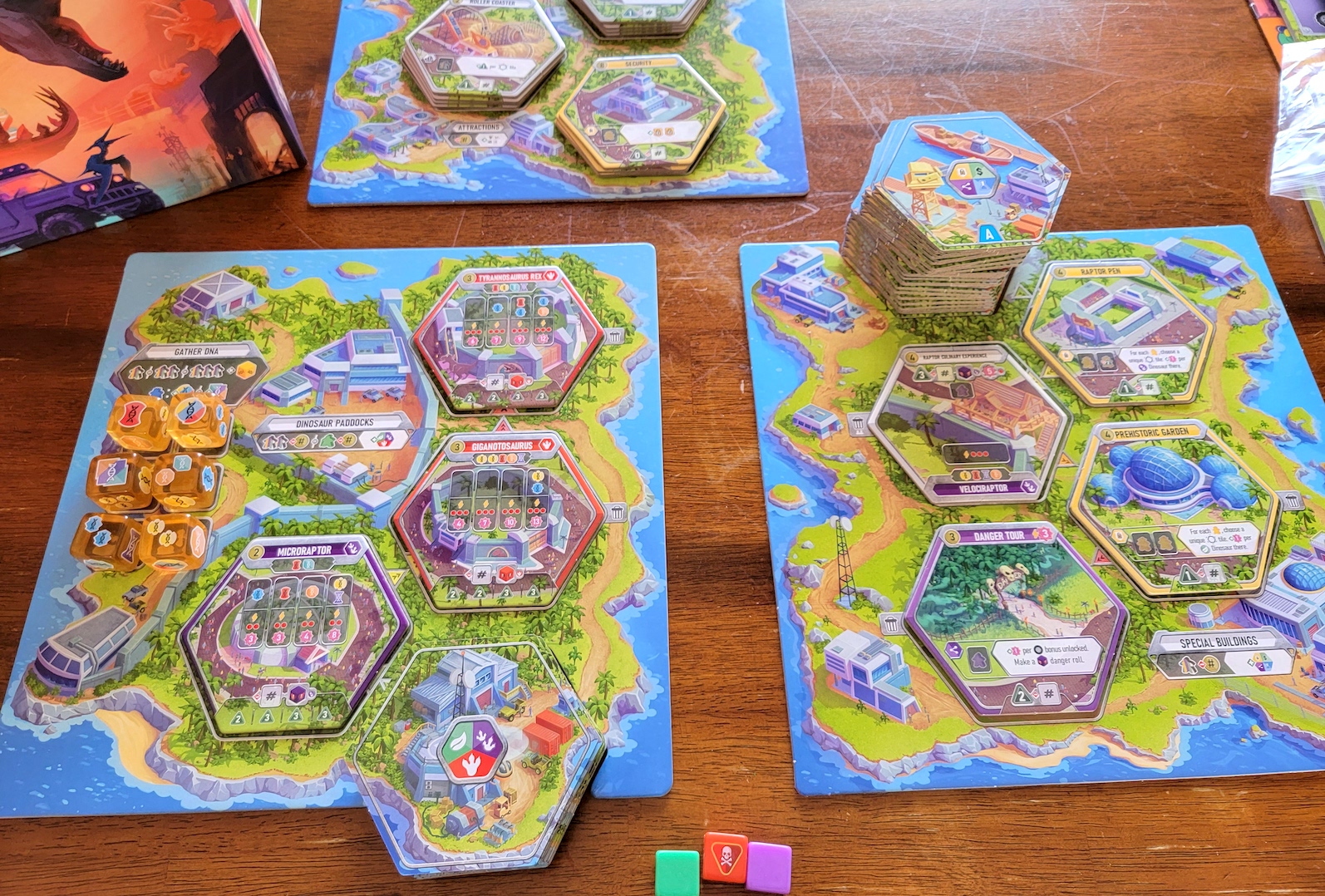 Finally, after everyone has finished their jeeple tour, players move on to income and cleanup. In this phase players check their threat level against their park security and if the threat is higher gain an amount of death tokens equal to the number of steps higher threat is compared to security. However, if a player’s security is higher than their threat, no death tokens are acquired, and that player can rest easy knowing their park is both exciting and safe for visitors. Players then gain income based on the excitement they generated from their jeeple tour, followed by examining the victory point tracker and adjusting player order accordingly (players with more points go later in turn order). Lastly the round marker is moved to indicate the progression of the game.

After 5 rounds are played, players count how many death tokens they have received throughout the game, the player with the least amount gets rid of their death tokens, and all other players subtract that many from their total. Points are then tallied and final scores are compared.

Dinosaur World is a love letter to anyone who grew up with movies like Jurassic Park. Many times during the game it felt like I was a kid again discovering my love for dinosaurs all over again. The rounds take a little more time than estimated but the extra time is welcome especially when playing with friends. And while teaching Dinosaur World seems more daunting than it is as everything is explained concisely, this allows more in-depth questions to be clarified by the rulebook. While I enjoy a lot of games that fall into light weight games for their simple rules and quick games and ability to be a gateway game, Dinosaur World is most assuredly a medium weight game for those like myself that enjoy strategy games. With box art that is a cut above the rest, making shelf space for Dinosaur World is a welcome experience and one that anyone who has a love of board games and dinosaurs will enjoy immensely.