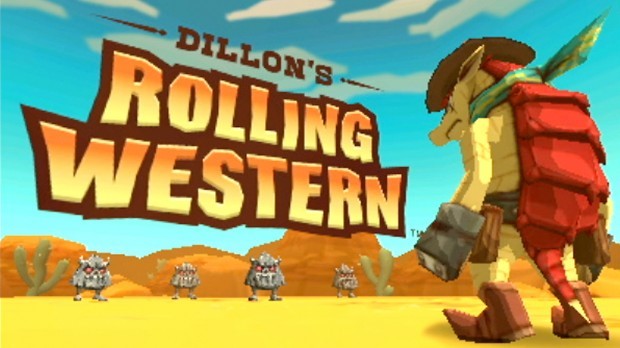 It’s only been a year since the first Rolling Western game made it’s way to the Nintendo 3DS, and with modest reception from its debut title and lots of things to fix, Dillon’s Rolling Western: The Last Ranger had a lot to prove. After having a chance to play through Rolling Western’s sequel, I’m sad to say that it largely failed to fix many of the game’s perceived flaws and ignored many of them outright.

For those of you unfamiliar with Rolling Western’s formula, it’s part tower defense and part action as players collect resources to build up defenses for a town under siege. Players control Dillion, an armadillo, who rolls around battling evil rock monsters called “Grocks,” because when inanimate objects become animate and evil you’re supposed to throw a “G” in front of it, right? Anyway, the players’ primary objective is to protect apparently extremely valuable livestock in the town via building fences and gun towers, and also by using old fashion beat ’em up methods once night falls and Grocks attack. When does night fall exactly? Good question! I wish I had an answer for you, but after a certain amount of time it just gets dark and then it’s go time–the game could probably have benefited from some sort of timer. The fusion of tower defense and action is the best part of the game, and while it has potential, Vanpool decided to phone this one in and not fix a lot of the issues that made the last game (and this one) fall short.

So just how bad is The Last Ranger? Well, let’s just say that you should bring along some ibuprofen. Frustrating controls that make Dillon bounce around the screen and irritating camera angles made me pull out fistfuls of my hair, especially because a large part of The Last Ranger relies on fast and efficient execution of combat and movement, which is not easily accomplished given the controls. After an hour of gameplay I was frustrated enough to call it a day, and the worst part was that these issues were widely acknowledged after the release of the first game. Take these simple problems and stretch them across a game that has you repeat the same process again and again, and you get an extremely unpleasant experience.

The tower defense aspect of the game is also flawed in that it costs the player far more money to build defenses and towers than the player usually even gets close to obtaining in the short amount of time before nightfall. This makes certain parts of the game a straight beat ’em up with no strategy involved, and turns other parts of the game into a tedious money grind. The whole process repeats itself in a gruesomely boring process that I had to force myself to experience time and time again.

Of all of the things that should be new and aren’t about Rolling Western, there is one addition that does bring some much-needed value to the game, and that addition is rival rangers. You’ll be bald by the time you get to this point in the game, but you’ll eventually unlock access to different rival rangers that help you out on the battlefield and make the game’s title lose all meaning in the process. These rangers are as cool and original as Dillon himself was in the first title in the series, and bring different skills to the table, like an octopus who can sling like 15 guns at once and make you envious of his multitasking capabilities. Unfortunately, these characters are only used as AI bots on the battlefield and they have an infant’s understanding of how to follow instructions. You can command them around the battlefield, but they’ll wander around for awhile and show up about ten minutes late to be of any use. This added frustration can be annoying, but if anything the companions at least give the player something pretty to look at on the battlefield.

The overall presentation of the game is simple and that’s not a bad thing, but it also isn’t anything to write home about. The graphics in The Last Ranger are alright, but they make poor use of the 3DS’ graphical capabilities. The audio, on the other hand, is great, but it’s more-or-less the same thing included in the previous installation, as if the title didn’t borrow enough already from its predecessor. Like many things in the game, this combination of potential and apparent lack of effort makes the whole thing forgettable.

Dillon’s Rolling Western: The Last Ranger has the player rolling around in the dirt a lot, and perhaps that’s where players should let this game lie. Anyone who expected the natural progression and improvement of the series from its first installation will be wasting their time and money on The Last Ranger. Maybe the people at Vanpool couldn’t work out the kinks, maybe they didn’t have the time to, maybe they didn’t know there were kinks at all, or maybe this title is just another in a long line of Nintendo-published games that refuse to innovate. Either way, The Last Ranger comes in far below par for a game that had such a promising first title, even with all of it’s flaws, but couldn’t deliver an improved game with the sequel. To that end, Vanpool missed an opportunity to take a mediocre franchise and turn it into something great, but maybe they’ll get it right next time with the release of Dillon’s Rolling Western: Electric Grockaloo. My advice is to play the first game if you like it, because there is nothing new to be had here.