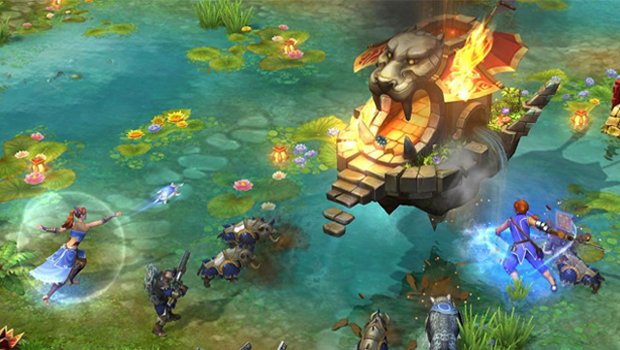 To define Prime World as a MOBA would be an extreme over-simplification. Developed by Nival, Prime World offers lasting hero development like an RPG with single-player battles that follow some semblance of a story, MOBA-style 5v5 games with two teams duking it out over territory, and even some Facebook game-style city building, which has you managing resources in order to advance your heroes. This interesting combination of game styles is sure to turn some heads, but instead of syncing up harmoniously, it seems Nival bit off a bit more than they could chew with this ambitious endeavor.

In addition to the traditional 5v5 vs bots most MOBAs have, Prime World has some other single-player maps thrown with features reminiscent of RTS games but with only hero management instead of unit micro management. These maps are lacking, with some of them being unbelievably aggravating due to their ridiculous levels of difficulty. These missions basically serve as a tutorial which can advance your heroes’ and kingdom’s levels while helping you understand the complex mechanics unique to Prime World.

Additional modes are a welcome change of pace, but feel unpolished

[singlepic id=16607 w=320 h=240 float=left]Prime World has a few maps which play more like a hero arena with two teams of heroes killing neutral enemies to gain prime and levels in order to either destroy outposts, capture a dragon egg in a capture-the-flag-style game, and also a few modified versions of the established 5v5 map. While the change of pace is welcome, these modes seem a bit unpolished, with games taking far too long and with little feeling of progress.

The game’s strength definitely lies in its 5v5 map called Borderlands, which mirrors many of the aspects of other games in the MOBA genre. Players push lanes of creeps into the enemy territory in order to try and overthrow their base.

Prime World also has some gameplay mechanics that set it apart from its competitors. One such mechanic is its in-match mini-game called The Playground. Upon winning the game, players are given a scroll which can be used to aid the team during combat. In higher level play, you’ll mostly see less experience-hungry support characters playing the Zuma-like mini-game while players controlling Prime-dependent heavy hitters gain solo Prime in the lane instead of splitting it with a teammate. This adds another dimension to the game, both during team fights and while earning levels in the lane.

Another unique feature introduced by Prime World is Native Land. In each lane, there are flags which, when raised, give the team who claimed the terrain a boost to their skills while they stand on the land.

[singlepic id=16605 w=320 h=240 float=right]Instead of gold or XP, players earn Prime. Prime can be spent on talents, which are enhancements that aid the player in battle. There are two types of talents, passive and active. After using Prime earned through combat to unlock passive talents, they are applied at all times and buff a hero or their abilities. Active talents are used by the hero during combat. Each time a player selects a new talent, their hero’s level rises, raising his or her stats a little bit each time. Every four levels a new, more powerful tier of talents are unlocked for the player to choose from.

After enough matches, players can unlock new talents for each hero, and talent builds can be customized to fit their own play style. In addition, heroes retain a portion of the experience they gained in battle, which goes towards their overall level. Once the hero’s overall level increases, the player can spend points upgrading a few statistics such as health, mana, strength, or intellect.

Heroes share from a pool of passive talents. Passive talents usually enhance a hero’s active talent or raise a hero’s HP, SP, or stats. The management of talents is cumbersome to say the least, with each hero having dozens of talents and knowing which one is right for which hero is near impossible at the entry level. Assigning, sorting, and unassigning talents gets in the way of the main game and takes away from the overall experience.

Prime can also be used to purchase items during matches. Unlike most MOBAs, though, Prime World doesn’t have a vast inventory of items to memorize. There are only a few items which include potions and battle-enhancing scrolls. This greatly alleviates the need to study up on items, but doesn’t add a lot of variety to heroes and their builds.

The Kingdom acts as the hub world

[singlepic id=16606 w=320 h=240 float=left]Players each have a kingdom, which acts as a hub-world for the game. While waiting for a queue, players can view and upgrade their kingdom with towers which affect the heroes in-game. Inns make heroes well-rested, giving them bonuses to Prime held after battle. Farms, mines, and lumber mills generate resources which are used to raise buildings. Libraries store talents found after battle. There are a multitude of towers, and it’s up to the player to decide which ones best suit their specific needs.

After battle, you also gain silver, the in-game currency which can be used to unlock new heroes. Players who want to progress through the game more quickly can purchase gold using real currency. Gold allows players to create stronger buildings, unlock new heroes, or advance already owned heroes faster. Unlocking heroes can be extremely expensive, with new heroes costing hundreds of thousands of silver, or 299 gold, the equivalent of 20 US Dollars.

[singlepic id=16603 w=320 h=240 float=right]With vivid colors and relatively detailed models, the game is quite beautiful. The animations and particle effects are fantastic, with some sweeping effects really capturing the splendor of Prime World’s universe. However, one of the weakest points of Prime World is the sound. The music is good, but there’s so little of it. During matches, there is no music accompanying gameplay, and the generic zips and zaps of attacks are relatively flat and shallow.

The more I played Prime World, the more I realized that I simply wasn’t having any fun. The game brings a lot of unique features to the table, but none of them are particularly appetizing. These poorly executed features, coupled with the fact that not all heroes are unlocked when you first start playing, makes finding heroes that counter others without looking it up online nearly impossible. Even if you do, players can’t synergize with allies because you’re forced to pick heroes before finding a match.

Prime World is free to play on Steam, so if you’ve got time to burn and are looking for a game that tries to shake up the MOBA genre, then give Prime World a shot. But it’s difficult to suggest Prime World to anyone looking for either a casual League of Legends-style game, or a more hardcore Dota-style game. Prime World falls somewhere in the gaping pit between each, failing to deliver on many of its core mechanics while bringing some to the table that were frankly unnecessary.