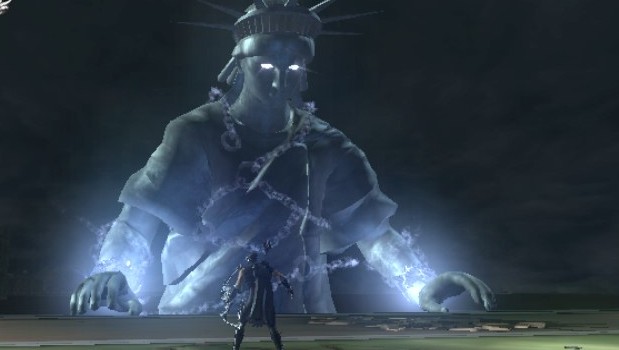 Before I start my review, I’d like to begin with a little context.

Ninja Gaiden 3 was released in March of the same year for the Xbox 360 and PlayStation 3.

The Wii U got an enhanced port in November with Ninja Gaiden 3: Razor’s Edge, a mere eight months after its initial release.

Twelve months. Four Ninja Gaiden titles. Only one of them was an original game.

I can’t be the only one that sees a problem with this.

[singlepic id=10962 w=320 h=240 float=left]Ninja Gaiden Sigma 2 Plus is the latest in a series of “enhanced ports,” which Tecmo Koei seems to keep trying to ram down our throats year after year. It takes place right after the previous game, continuing the adventures of Ryu Hayabusa as he fights demons and, along with the player, tries to make sense of what’s happening to him. Along the way, he’ll fight along side several scantily-clad, large-breasted women, in order to bring down a possessed Statue of Liberty – among other evil-doers. It’s a set-up that would make most anime fans look away in disgust, pretending they don’t know the creepy, Mountain Dew-riddled maniac in the corner, but Ninja Sigma 2 Plus wears its batshit insane premise proudly.

There’s really not much of a point going through the specifics of this game compared to the two previous editions of this game. Combat is still the same highly-stylized combo-driven system, and it still feels a bit too rigid compared to other highly-stylized combo-driven systems. Platforming segments break up the monotony of combat, and only serve to highlight the rigidity of the controls. You’ll find and upgrade new weapons and magic, fight ninjas, demons, and a menagerie of some of the craziest bosses in video game history. It’s all competent, but lacks the magic and hardcore difficulty of the first Ninja Gaiden/Black/Sigma game.

The Vita version makes a few new additions to spice things up, though they’re largely unnecessary. The “Hero” Play Style returns from the first Sigma Plus, allowing novice  players to finish the game by putting blocking and evading on auto-pilot whenever Ryu’s health gets too low. You’ll also get a few new costumes (oh, boy!), the ability to use the touch-screen for different controls (like using the bow), as well as a new “Ninja Race” mode, which forces players to move through the various levels as quickly as possible.

[singlepic id=10963 w=320 h=240 float=right]Ninja Gaiden Sigma 2 Plus also introduces a few other, more glaring additions – namely worse texturing and rather large dips in framerate. While Ninja Gaiden games are typically known for their silky smooth framerate, Sigma 2 Plus sees significant drops whenever a large amount of action is happening on screen. And anything more than a few feet away from the camera looks like the jagged drawing of a child with a Pixy Stix infusion. These issues are never enough to completely detract from the game, but it’s definitely obvious and unwelcome.

Does this game need to exist? A portable version of the first Ninja Gaiden game was a great idea – Ninja Gaiden/Black/Sigma is largely considered one of the greatest action games of the Xbox/PS2 era, and it’s great that we have a portable edition of it. Ninja Gaiden 2, however, was considered mostly OK by a large majority of critics, and it’s hardly the necessary experience that the first game was. Even with the Vita’s meager library, you could do far better, and in a sea of choices, Ninja Gaiden Sigma 2 Plus drowns itself with above-average gameplay, unnecessary additions, and technical issues. It’s not a bad game – just superfluous.