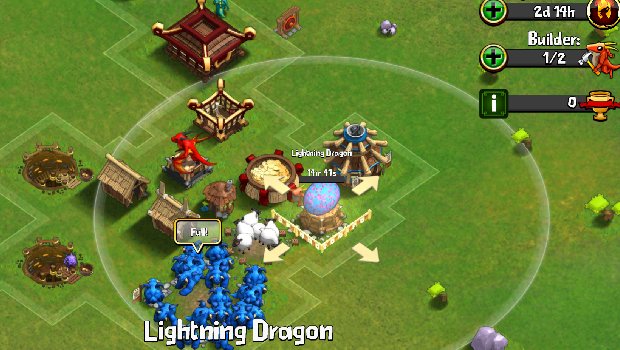 Imagine someone released a game that practically created a new genre of realtime strategy for portable touch-sensitive devices like the iPad – something that played very different from most of the other RTS games available. Not only that, but take for granted that this was a fun game, with controls and tactical considerations that were just deep enough to be engaging, but still simple enough to pick up and play at just about any time. That would be a pretty amazing game, it’s fair to say. Now, make it free-to-play and have it include a city and defenses building aspect as part of an equally creative asynchronous multiplayer game – two games in one, in a way – that also had a lively and promising PVP aspect along with a very long single player campaign. If this sounds great to you, that’s because it IS great… and at the same time, it’s unfortunate. If you want to know why a great-sounding game like Battle Dragons is getting a suspiciously middling score, then read on.

Let’s start with the fundamentals. Battle Dragons doesn’t have much of a story to it beyond a paper-thin presentation of its world – to wit, you’re in charge of a growing village of dragons with a far east motif going on, and your job is to lead your dragon army to victory, reaping the spoils of war in the process. Being light on story isn’t a big concern, really; especially when it comes to the iOS devices, I’m a big believer in gameplay over all else. Apparently the developers believe the same, since you’re almost immediately thrown into a tutorial once you load the game, where you’re taught the fundamental ropes of how to oversee and grow your dragon army – and in the process, the tutorial does a good job of explaining every facet of the game that you’re going to experience.[singlepic id=15623 w=320 h=240 float=left]

As said before, there are two real sides to the Battle Dragons coin. On the one side you have the city building aspect, which should be familiar to most people who’ve played a Farmville style Facebook game at any point. There are three currencies at work in the game: Gold, sheep, and pearls. You can build gold mines and sheep barns to slowly accumulate the respective currencies, while pearls are only able to be acquired by achievements – or, if you’re impatient, directly via the cash shop. The gold and sheep form the backbone of your city’s economy, and you’ll spend both to build additional offense- and defense-enhancing structures, upgrade existing structures, or train a growing assortment of dragons to take into combat against other players in Battle Dragons. This is a good point to mention that Battle Dragons is heavily geared towards PVP play, and the gold and sheep you accrue in your mines and barns can and will be lost (up to a point) when other players successfully invade your city. You won’t lose any of your core structures or even have to pay to repair them, but a major aspect of the game is the experience of trying to save up gold and sheep to spend on an upgrade or an expensive building, only to be set back due to another player successfully invading you. After a damaging invasion, you’ll get a ‘shield’ erected to defend you for a good number of hours, giving you a chance to rebuild and spend what assets you have on upgrades, but really – if you’re a person who loathes PVP, you can actually place Battle Dragons in your ‘avoid’ pile right now. Even with the single player campaign included, this game is shamelessly geared towards player invasions.

Speaking of those invasions, you can engage in some as well – and it happens to be a great way to gain additional funds to build your own dragon fiefdom. The gameplay concept is simple, but surprisingly engaging: you’ll go to a randomly selected player’s city, and be given a map-wide view of their buildings and defenses. Then, you can touch anywhere outside of the defensive perimeter to unleash as many dragon soldiers as you’ve trained and brought to the fight. There’s a variety of dragons, all with different stats and target preferences – that second part being key, because once these dragons are unleashed, you can’t control them. So, a dragon who prefers to target defensive structures will seek those out above all else (and walk right past a precious store of gold or sheep), while a dragon that prioritizes economic structures will loot those first and foremost (even if they’re being bombarded with enemy defenses). It’s a very lite version of a realtime strategy game, but the fact is it works wonderfully – if you get into it, you’ll find yourself building up certain mixes of various dragon types and deploying them carefully to maximize the damage they do versus the losses you incur. Also, any dragon deployed is effectively ‘gone’ from your reserves – even if they slaughter every enemy building on the map without resistance.[singlepic id=15620 w=320 h=240 float=right]

Battle Dragons is a free to play game, but you can get a whole lot of mileage out of it without paying a dime. Granted, you’ll be doing this while the game builds and creates new areas – in particular, new and upgraded buildings – at an increasingly sluggish pace, one eventually measured in days for the more advanced buildings. I’d advise any new players of this game not to spend their precious pearls on finishing structures rapidly – instead, save up for additional ‘builder’ units. At 500 pearls a pop, these allow one building or upgrading project to be undertaken for each builder you own, which means you’ll upgrade your city as a whole much faster this way, even if individual buildings still take quite a long time to finish. It’s a fairly balanced system, and I never felt pressured to spend money at the cash shop. The entire progression of building up your defensive/offensive is well thought out, and even the PVP losses don’t sting too terribly most of the time. In fact, they’re educational – whenever you lose a fight, you’re able to get a replay showing exactly what your opponent did to get by your defenses, allowing you to learn from your mistakes – and pick up some tactics for yourself along the way. In addition, the game has an automatic ranking system for matching players up in PVP, a guild system, a sizable array of upgrades to purchase, and is generally quite a lot of fun.

The problem is, it’s not original.

If I just played Battle Dragons on its own, this review would probably end with my enthusiastic endorsement of the game. The problem is, I’ve also played a game called Clash of Clans – and to say that Battle Dragons is similar to Clash of Clans would be an understatement. This is not a case of mere similarity, or of one game clearly being inspired by the other. Instead this is closer to both games feeling as if they were a carbon copy of each other, but with all of the graphics and sounds changed. Worse, there doesn’t seem to be any real enhancement of Battle Dragons over Clash of Clans. Everything down to the two-currency economy, to the general progression, to the replay style to everything else seems not just familiar, but absurdly familiar, shamelessly familiar. The only difference is that, instead of tiny little cartoony human soldiers and archers and warlocks at your disposal, you’re dealing with tiny little cartoony dragons. It’s a change of sorts, but not much of one – and frankly, not necessarily one for the better either.[singlepic id=15619 w=320 h=240 float=left]

And yet, Battle Dragons is a fun game, original or not. So what’s a reviewer to do? Well, all I can do is report the truth: whatever similarities it may have to Clash of Clans, Battle Dragons’ core gameplay is extremely entertaining. As a game, it succeeds. And while you can go grab it from the App Store for free, you can also do the same with Clash of Clans – which has been out around a year longer. Play them both, one after the other. Decide for yourself if they aren’t both suspiciously close to being the same game – and then, decide just which one you’d rather play. Maybe you’ll prefer the barbarians to the dragons. Maybe not. But at the very least, you’ll be more fully informed about just what you’re playing, and whose cash shop you’ll be tempting yourself to frequent.