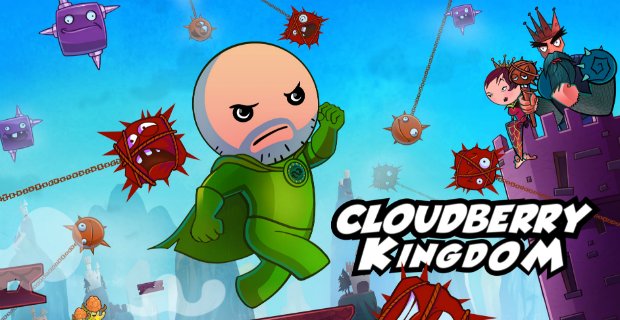 Those of us who were brought up with a NES controller in our hands tend to have a special love for the old platforming adventure games.  No matter who we are in real life, we can all relish in our past exploits in saving numerous princesses.  Cloudberry Kingdom, a classic run and jump hero platformer from Ubisoft, fulfills every need for platformer junkies.  Then, they take it a step further, breaching new territory in a tried and true genre.

[singlepic id=15110 w=320 h=240 float=left]Cloudberry Kingdom is a clear homage to the iconic Super Mario Brothers game.  The main character, Bob, is a stubby little man with facial hair who possesses an uncanny ability to dodge and jump.  His task is to save the Princess from King Kobbler, who is a rather large imposing figure hell-bent on evil.  To complete his fate, Bob must traverse hundreds of obstacle ridden levels.  The obstacles themselves are even clear homages, with spinning fire chains, spikes, swinging boulders with faces, and strategically placed enemies whose heads make excellent trampolines.  Adding in a few deadly laser shows and ghost platforms that fade out when you need them most, Cloudberry Kingdom has captured the best of the past and combined it with their own ideas.

[singlepic id=15111 w=320 h=240 float=right]Unlike many classic platformers, where you have moving enemies and long, expansive levels, Cloudberry Kingdom streamlines their action into short bursts.  The levels are reeled off consecutively, without any breaks or boss battles.  This can get a little repetitive, but the fun and increasing challenge of the levels works to alleviate it.  While early levels will have just a few obstacles, later levels can be overwhelmingly jam-packed with dozens of swingers and spinners, allowing only one solution line through the level and requiring perfect timing.  A number of power-up like character modes make for number of different experiences.  The normal Bob can run and jump, but there is a Bob with a jetpack, a Bob strapped to a stone wheel, a tiny and a large Bob, and numerous other crazy and inventive ways to move through each level.  Some power-ups can be a huge help, like the double jump, but others can make the levels harder, like a rocket cart reminiscent of the mine cart levels of Donkey Kong Country.

[singlepic id=15112 w=320 h=240 float=left]There are three main game modes.  Free play mode allows you to pick level type, length, difficulty, area, and other parameters to challenge yourself in particular ways.  There are numerous combinations of level types, difficulties, and formations.  On top of that, you can fully customize parameters like player speed, jump height, number of performable jumps, and the size and shape of the character.  With simply this mode, there is an extremely high number of ways to traverse a level.  In the Arcade Mode, players are given a certain number of lives, and you play through a gauntlet of random levels until you run out.  As you pass certain level numbers, you gain power-ups that you can start the game with.  The power-ups aren’t removable or changeable in the levels, but rather become part of the challenge, with the levels being formed to better challenge what the player is capable of doing.  Getting to level 25 in classic Bob mode gifts you with a jetpack mode, and then getting to level 25 with a jetpack opens another power-up mode with all different challenges.  Aside from the normal arcade style, there is a time-attack where gem pickups (otherwise just point counters) provide extra seconds on a constantly ticking clock, and a Hero Rush mode, a time attack where each proceeding level has different power-up, providing a manic experience.

[singlepic id=15113 w=320 h=240 float=right]In the story mode, rather than having lives, you are free to die infinitely (and you will) in a continuous push to get through to the very end.  Rather than selecting power-ups, certain stretches of the game will need to be passed with a particular power-up.  Each part of the story can be replayed, but your progress is saved and can be picked back up at any time.

The game looks great visually, with funny little characters and nicely designed cartoon platforms and backgrounds.  The music is a playlist of fun, light, and danceable techno tracks, nicely selected for the game’s atmosphere.  Players can fully customize their little hero, from the color of their capes and jumpsuits, well-groomed facial hair, to the choice between having devil horns, a knight’s helmet, or a brain for a head.  There is not a glut of options for customization, but there is enough for it be a welcome addition.

[singlepic id=15114 w=320 h=240 float=left]As much as can be written and said about this game, it really just needs to be played to fully understand how well made the game is.  The team at Pwnee Studios have masterfully captured the past and reshaped it to be both gloriously nostalgic and remarkably fresh.  Cloudberry Kingdom can provide endless entertainment with their strategy of random level builds and infinitely escalating difficulty.  While the game in certain stretches can suffer from monotony, it always seems fresh and fun again each time you pick it up.  You’ll likely never have the same stretch of levels twice.  One problem with random levels has been that often the levels are broken or are not challenging, but the generator within this game is uncanny in knowing what to place and where to make something feel both impossible and completely doable with just the right move made by the player.  At a $10 price tag, this game is worth every single cent and more.  Cloudberry Kingdom is a terrific gauntlet romp through classic gaming’s hallowed halls.