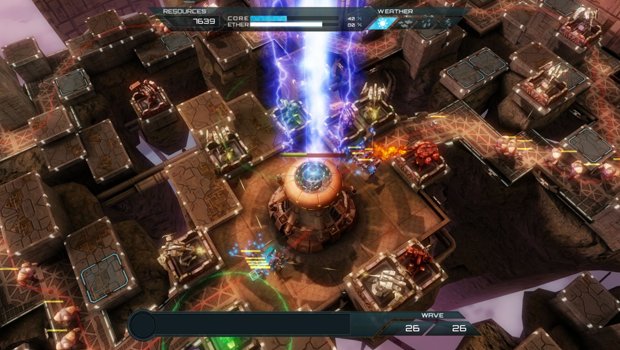 Tower defense games have been a gaming staple for years now, and Kuno Interactive’s Defense Technica bills itself as the “the next evolution” for the genre. The problem with evolution is that the difference between one generation and the next can be ridiculously miniscule, and sometimes turns out to be a dead end for the lineage; unfortunately, this holds true for this latest entry in tower defense gameplay. What we have here is an entirely average game that doesn’t deliver on its implied promise to bring something new to the field, failing to really stand out from the pack in terms of gameplay and polish, while at the same time introducing several changes that are more disappointing than anything else.

The storyline for Defense Technica takes place in the distant future, after humanity has made contact with an alien race which befriends, but later betrays, the human population. You have billions of humans dead, a desperate remnant trying to fight back against the aliens, and… that’s more or less it. The game has a story the way a porn movie does — it’s there purely to give the vaguest semblance of context, but no one seems to care what’s really going on, including the writers. The upside is you don’t have to deal with a greasy, semi-enthusiastic Ron Jeremy once the narration is out of the way. Or maybe that’s a downside? It depends on who you’re asking.

I’m not incredibly demanding when it comes to plot and story with my games. It’s nice to have, and it can potentially make a mediocre title great — but if the actual gameplay is solid, that will more than make up for a lacking or absent narrative. Unfortunately, Defense Technica fails to deliver on this front as well, presenting a tower defense experience that’s remarkably similar to most of the titles that have preceded it. The variety of defensive structures available in the game is largely comprised of old standbys — the gun with long range that can only focus on a single unit at a time, that area-effect attack, the tower with very limited range that packs a serious wallop… there’s very little here that hasn’t been seen before. The enemy list is about as typical as the weapon selection, and is on the thin side — “nine different enemy types with three different classes each,” but the bulk of difference between them is cashed out in terms of resistances to particular towers. Some fly, some are ground-based, some are fast, some are slow — but none of them seem terribly unique.

The ‘variable enemy pathfinding’ touted in the feature list doesn’t add much to the game, largely ending up as an entirely predictable way to alter the path of incoming enemies — ideally to make the enemy path longer, and thus allowing more opportunities to wear them down before reaching your base’s all-important nerve center. The ‘weather effects’ typically add a map-wide modifier, such as lowering the effective range of weapons. Upgrades can eventually be bought for towers, unlocking the ability to develop specialized defenses on the field — but again, this is nothing very new. These are altogether bland, incremental changes to the genre at best.

Graphically the game is mediocre, but the 3D aspect actually works against the player — it’s impossible to pull back and see the map in its entirety, and this combined with the lack of a mini-map means you’ll be spending a lot of time panning around the battlefield just to see where incoming enemies are located. Worse, as you kill enemies, you need to move your mouse over the currency that ground units drop in order to build new towers or upgrade existing ones — and after units are destroyed, said currency only remains for a limited amount of time before disappearing. The apparent idea here was to require the player to be ever attentive to the happenings on the map and thus more invested in the fight, but ultimately it just feels as if the developers found a way to make Defense Technica more pointlessly irritating than typical tower defense titles.

To top it all off, the presentation of the game is generally lacking in polish. From the interface to the 3D graphics, everything is on the straightforward and mediocre side — not terrible, but nothing that stands out from the pack, either. Clearing a map yields a simple success screen, while losing gives up an equally simple failure notification. Even a merely bog-standard game without a storyline can save itself with a suitable amount of aesthetic flair and polish, but Defense Technica doesn’t even give that much to the player. Instead, you get a bare minimum, at times clumsy interface with mundane graphics and sound. There’s a hardcore mode, there are achievements to get and stars to unlock, but with the exception of the most obsessive-compulsive completionists, all the tasks are more likely to be chores than challenges.

Launching at $14.99 in the Steam store, Defense Technica sadly does little to set itself apart from the rest of the tower defense pack, and actually feels like a step backwards in more than one way. If you’re looking for a title which really does something new or exciting with the genre -- or if you just plain want a new tower defense game that looks and feels flashy and exciting -- hold off on this one until the inevitable Steam deals chop the price by a third or greater. Until then, you’ll have to keep waiting for the real next evolution in tower defense strategy -- because Defense Technica isn’t it.