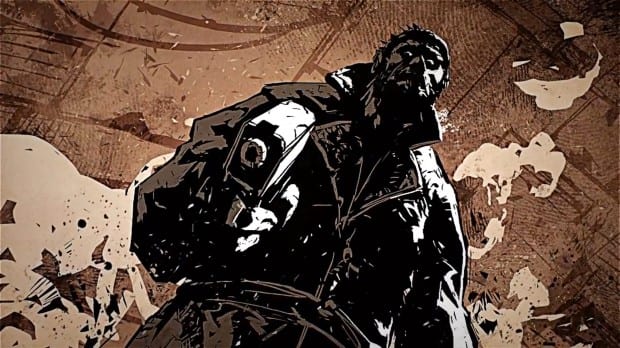 Zombies are the dubstep of popular culture. They’re everywhere, they’re immensely popular, and they all start to sound the same after a while. In video games, they’ve found themselves into virtually every single kind of genre you can think of: shooters, survival horror, RPGs, strategy games, and a host of others. Need a theme for your generic Angry Birds clone? Just add Zombies, and it’ll sell like mad. With Deadlight, a game by Tequila Works, we have a new take on the zombie mythos: the side-scrolling puzzle platformer.

Deadlight places you smack in the middle of Seattle, 1986. You play as Randall Wayne, a man looking for his family in the aftermath of a horrible zombie apocalypse, here dubbed “Shadows.” You were travelling with a group of survivors when one of them ends up bitten, and has to be taken out. The sounds of gunfire draw the attention of the Shadows, and your group ends up parting ways, fleeing for their lives. You continue your search for your family, finding pages of your journal along the way, which helps to fill in back story of who you and your family are, what caused the calamity, and how you got to where you are now. Along the way, you’ll learn of a group known as “The New Law,” a violent militia which becomes more of an imposing threat to your survival than even the Shadows. The story is decently told through graphic novel-styled cutscenes, and the voice acting is done well enough, though the dialog can feel rather stilted and unnatural at times, and the plot tends to be a bit predictable with some interesting, if not unexpected, twists.

[singlepic id=8515 w=320 h=240 float=left]Comparisons to games like Limbo and Shadow Complex are inescapable, though the game tends to play out more like the former. The game is incredibly linear, moving you from set piece to set piece, and backtracking is rarely, if ever, required. There are moments of exploration, allowing you to find hidden life or stamina upgrades, or secret ID tags or minigames reminiscent of those old Tiger Electronics handhelds from the 80s, but you never truly explore the world like a typical Metroidvania style game. That’s fine, though, as this helps to keep the puzzles focused, the gameplay constantly moving forward, the stakes high, and the goal of finding your family at the forefront of your mind.

While the gameplay and structure is similar to Limbo, the controls are much closer to Shadow Complex. Movement and aiming is handled with the analog sticks, and attacking with either guns or the axe (with the X button) works well enough, but there are times, especially in sticky situations, where the controls seem to fight you. In a game where a timed jump to a ladder is the difference between safety and death, any lack of precision is noticable and detrimental to gameplay. I’ve found myself making jump after jump after jump, still not reaching the ladder directly above me because Randall wouldn’t face the right way, or would jump too far. The game also values avoidance over combat, as you have a stamina gauge that limits how many times you can swing your axe at once, and getting trampled by more than one zombie means death more often than not. Luckily, checkpoints are incredibly plentiful, so you’ll never find yourself too far from where you failed, negating the frustration somewhat.

The core gameplay consists of traversing different terrain, be it sewers, a suburb, a warehouse, or hospital, getting from one point of the level to the next, while trying to solve puzzles do so. The 2.5D perspective allows for some very interesting level design, such as running from house interior, across a clothesline, into another house, and back out again. Sections where you are being chased by zombies, or worse, the New Law, are exhilirating, forcing you to run for your life, bashing in walls, pushing over shelves, and jumping precariously from ledge to ledge.

[singlepic id=8516 w=320 h=240 float=right]The puzzles themselves are hardly ever taxing, most of them figuring out how to get from room A to point B. Crate pushing, jumping puzzles, climbing ladders, and button pressing are all here and accounted for. There are a few headscratchers, but most of them are due to a lack of clarity of how to interact with your environment. The most egregious section comes during the sewers when you meet the Rat Man. The puzzles here aren’t particularly difficult, but are rather solved almost entirely through trial and error. This section goes on for way too long, and feels like it pads the game’s length rather than complementing it. Luckily, after this section, the game picks back up and gets much better, but the puzzles still never get very difficult. Compared to Limbo, this game is an absolute breeze.

Despite some interesting level design, the graphics are a bit bland. The game is supposed to be set in Seattle, yet it could easily be interchangeable with any sort of wooded metropolis area. Where are the recognizable landmarks, like the Space Needle, or Pike Place Market? Nothing really stands out as attention grabbing, and everything looks generic, as if they decided to set the game in Seattle because it fit what environments they’ve already made. The time period is never really put to use either, other than finding the odd cassette tape or other electronics of a bygone era. It all just seems rather arbitrary. The graphic novel cutscenes look good though, utilizing heavy black lines and rough sketches that fit the gritty feel of the rest of the game. In addition to the decent, if a bit over the top, voice acting, the music is fantastic. Somber in all the right parts, heart-racing when it needs to be, the music is one of the highlights of the game.

[singlepic id=8601 w=320 h=240 float=left]Deadlight’s biggest sin is its length. I downloaded the game on a Friday morning and finished it in one sitting later that afternoon. All told, it took me about four to five hours to complete it in its entirety (and the game actually has my completion time recorded at just under two hours, so it didn’t record all of the times I restarted due to death). There isn’t much replay value other than going back through and finding all of the various secret items or unlocking achievements. There’s a leaderboard for quickest times and completion percentage, so speedrunners can vie for the top position. And because the puzzles really don’t have any depth or difficulty to them, there really isn’t a whole lot of reason to go back to replay them. Granted, it only costs $15, but it still seems like a steep price point for the content here.

Very few properties elevate themselves above the status quo of zombie tropes; a notable exception is the Walking Dead, which uses zombies as a frame for the true theme of humanity’s own inhumanity. Deadlight tries so hard to be more than the sum of its decaying, zombified parts, but due to technical problems with controls and odd bugs like having death sound effects play after you restart the checkpoint, or a bug that tells you that your hard drive is disconnected when it isn’t (it doesn’t actually affect your ability to save, but it is disconcerting the first time you see it), relatively easy puzzles, and an incredibly short length for the price point, Deadlight comes off as being a bit unpolished.

And yet, I still say it’s worth playing. For all of its shortcomings, its flaws, and its failures, I still enjoyed my time with Deadlight. I wanted to find out what happened to Randall and his family. I was driven, compelled to finish, and I would still recommend that it be played. Fans of side-scrolling platformers, and zombie games in general, will find an original, if imperfect, experience here.  And while the price is a bit steep for the content, I think there’s a great game to be found in here. I hope Tequila Works gets a chance to make a sequel, because I think this is a zombie story worth telling.