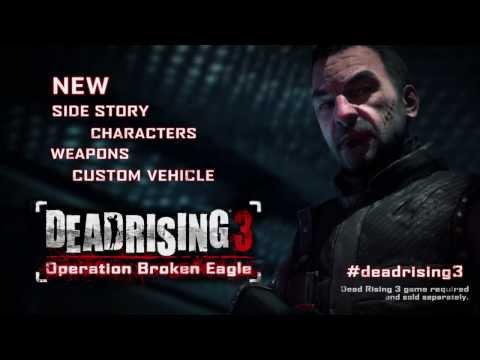 Los Perdidos is a dangerous place, and developer Capcom Vancouver was thinking ahead when they planned out their extra content. From the cell phone / SmartGlass integration in Dead Rising 3 to the recently released DLC episodes, they string together additional plotlines which might have been inspired to the intertwining tales of Pulp Fiction. Though we have Operation Broken Eagle reviewed on its own, I will briefly revisit it as we go through all four episodes known as The Untold Stories of Los Perditos.

Summarized below and spoiler-free, each are available individually at $10 USD, or together in a $30 season pass. There are a number of vehicles, weapons and objects added within each installment, and once found are available to Nick and Dick in Dead Rising 3 proper. On top of that you can expect at least one combo item per DLC, as well as extra costumes that carry over. Though none of the episodes allow you to access all of Nick’s combo weapons via safehouse lockers, you can still combine based on collected  blueprints, or even access your stash from within the mobile locker truck.

[singlepic id=18349 w=620 h=350 float=center]All of your kills, rewards, and experience transfer back (sort of). I just got my 100,004 kills achievement, and my counter reads somewhere near 84,000. It seems that at least one of my excursions into the Untold Stories didn’t bother adding up the kills and bringing them back to Nick, though the internal counter seems fine.

Regardless, I’ve put a lot of time into Dead Rising 3. I’ve played it so much that I can tell where I am at any given moment and know how to get through to the other areas without even thinking about it. There isn’t much left of the game for me, save another run-through while paying close attention to the side-quests so I can save all the people. I’ve collected most items and have closed off more than a few “destroy X of these things” missions peppered throughout the game proper.

[singlepic id=18353 w=620 h=350 float=center]I found that the Untold Stories of Los Perditos compromise too much in trying to be accessible. Capcom Vancouver should have stuck with a single vision for when gamers would be playing it. The DLC is available before you finish the main game, but there are cross-overs with Nick that may spoil parts of the main campaign. Yet for some reason, there is nothing to work for above the level 50 provided in the main game, or any additional benefits to collecting PP(experience points) for those who may already unlocked all the skills. Furthermore, the “destroy X items” included inside each episode is hollow padding for a max’d out player, and to be blunt, they come across as contrived and sometimes awkward.

If I may suspend disbelief for a moment, the other glaring flaw is that you play people who may have combat skills, but they don’t necessarily have Nick’s talent in combining, nor would they have the same experience in dealing with zombies. Also, why are we pitted against the hardest of zombies during early periods of the game that happen well before Nick?  There are several other continuity issues that gnaw at the plausible integration – but lest we take this too seriously, it really does come come down to combat.

[singlepic id=18354 w=620 h=350 float=center]In the DLC, we get almost everything (save the kitchen sink) thrown at our four protagonists, yet some of the most exciting times in Dead Rising 3 happen where you have no combinations and need to get down a road littered with zombies. Instead all four play lacking any real restriction, so you walk in feeling like Superman with no kryptonite in sight. This design allowed me to speed-run an episode, on nightmare, in less than a half hour (including cutscenes!). All but the last Episode could be done in similar fashion, where that one might have taken an hour.

It’s not all bad, however, they just lack the value that makes it easy to recommend. If you’re not in a rush each episode should take you an hour or two, where the last episode might take you three. Each one carries with it different collectables and “destroyables”, a handful of weapons and a vehicle or two that seem worth it, and a slightly different view on some of the characters that Nick has interacted with.

Dead Rising 3: Operation Broken Eagle Trailer
Episode One: Operation Broken Eagle
Playing a military bad-ass with a striking resemblence to Inigo Montoya and working for the bad guys, this episode is all about redemption. A chaingun, the only combo vehicle recipe in all the DLC and a set of combat knives round out the high-points in this single circuit tour of Los Perditos. While it’s alright, it isn’t around long enough to feel valuable, and that recipe is for a bike I’d never ever want to ride into battle. It’s too bad you can’t remove recipes so you don’t accidentally make it.
Dead Rising 3: Fallen Angel
Episode Two: Fallen Angel
You play an “illegal”, a fierce woman who’s whose plight barely overlaps the main one, and has almost no bearing on Nick at all. Combining an assault rifle with a set of defibrillators creates a worthwhile shock rifle, but the constant badgering about Angel’s alcoholism is sad and altogether insulting. Destroying randomly placed towers is almost fun compared the questionable end of this DLC. It is a needless sacrifice, and easily my least favorite of the four episodes.
Dead Rising 3: Chaos Rising
Episode Three: Chaos Rising
With more running around than episode one or two, it is my second-favorite of the two – if only for the custom vehicle included. You can’t combine to make it in the game proper, but it’s the single reason I run into garages to summon a set of wheels. Playing Hunter, a bad-ass who fights to wrest control of the biker gang in his bid for payback, it feels like it fits in the game. The weapons in this one are entirely forgettable, however, and I found they don’t stand out in Nick’s arsenal.
Dead Rising 3: The Last Agent
Episode Four: The Last Agent
We hop into the only compelling storyline content as you play Brad Park, a ZDC Agent who ends up investigating the outbreak. His custom vehicle is a ZDC armored car with nitrogen cannons and a front spray to match. The railgun is a blast and although the turbine doesn’t do a whole lot of damage it is a useful tool for being able to move through hordes of monsters. Some of the collection tasks are both mundane and contrived. For instance, Park is sent to fetch a special gun to disable the mutated zombies to collect their ZDC chips, but then you simply kill them any way you want and collect the chips regardless. It has the longest story content and actually ties into the main plotline nicely along with Operation Broken Eagle.

[singlepic id=18351 w=620 h=350 float=center]Were I to recommend only one DLC package, I’d give Episode Four the nod. It carries with it the most content, main story interaction and covers off the ZDC and their interest in Los Perditos. If it were for a special vehicle, Hunter’s custom rise from Chaos Rising(pictured above) is arguably the best balanced vehicle in the entire game. It handles well and is able to cut crowds to shreds while seeing where you’re going. Pinning the brake and burning out in a circle provides a tight turn radius, which overheats the back tire made of blades and provides a burning ring of fire. The front of the bike is effectively a meat grinder that fires burning saw-blades into the crowds ahead of you. Some might say “But, but, Rollerhawg!”. While a wall of rolling steel and fire seems like fun, in practice it’s a death-machine that doesn’t travel well as it has a tendency to tip.

Sadly there is a survival horror game in here that was dying to get out, and playing someone with a very limited set of tools while facing hordes of zombies in a flight-or-fight tone might have helped an otherwise bland extension of Dead Rising 3. Untold Stories of Los Perditos doesn’t carry its weight and if the $30 USD price has you wavering, it might be wise to wait to see if it ends up on sale. The Last Agent provides some closure for several of Nick’s friends, so if you’re looking for more depth it’s the only one you need.