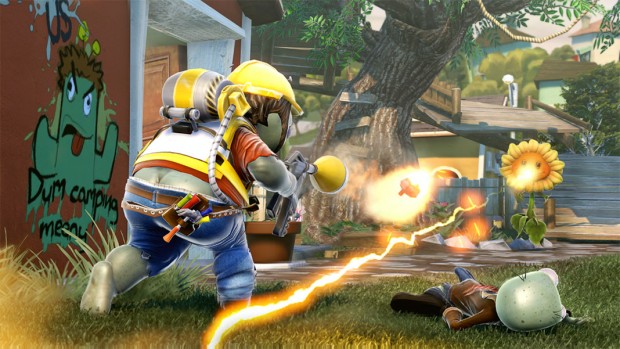 Plants vs. Zombies: Garden Warfare is endearing on so many levels.

This isn’t exactly a surprise, considering PopCap’s track record. From Peggle to Zuma, from Bookworm Adventures to Bejeweled, each of their games has a distinct, though decidedly casual style. With the help of EA, PopCap has decided to take their most popular franchise and turn it into a shooter that both their typical casual base as well as the more exacting core audience can enjoy.

And it works so very, very well.

Garden Warfare sees the two eponymous factions continuing their eternal struggle for lawn domination — except instead of taking place on a two-dimensional plane, both the plants and zombies are engaging in over-the-shoulder, team-based multiplayer combat, albeit in a cartoony, family-friendly fashion. There’s no blood to be found, enemies are “vanquished” instead of killed, and there’s a general tone of whimsy and ridiculousness that pervades the entire experience. Awesomely enough, the all-ages tone doesn’t diminish the actual game in any way. Players accustomed to shooters of all stripes will feel right at home here, while younger or more casual players are eased into its unique premise in a couple different ways.

Each of the four classes in each faction are unique and distinct, offering their own takes on the standard soldier/sniper/medic/etc. archetype. Each character has three different abilities, clearly mapped to the face and shoulder buttons, their respective skills visually represented on screen with cooldown timers and ammo counts. You won’t have to worry about weapon loadouts or complex control schemes — simply choose the class you’d like to play, aim, and fire away.

Roles are clearly defined, using the already established characters inside the Plants vs. Zombies universe. The Chomper is a close-combat melee powerhouse, able to eat the undead in single bite. The All-Star is Garden Warfare’s take on the heavy, with a football-launching gatling gun. The Sunflower and the Scientist are the respective armies’ own version of the medic, each one handling their role a little differently — the Sunflower has a healing ray that requires you to follow around allies you’re trying to heal, while the Scientist drops stationary healing sprinklers for teammates to use. Anyone who has played the original game will instantly recognize what each character is supposed to do, and the classes are so naturally translated that it feels like this game wrote itself. It’s easy to understand who exactly is capable of what, and after a few matches, using them is an absolute breeze.

Even though there’s a little overlap in the kinds of abilities available to each faction, teams are surprisingly asymmetrical. For example, Zombies are the only team that has the Engineer and his protruding buttcrack, while the Plants have exclusive access to an effective sniper with the Cactus. Despite the lopsided nature of which classes are available to which team, matches always feel balanced. Winning comes down to an effective use of the skills available, rather than a feeling that one particular class is more powerful than another.

The challenge system further eases new players into Garden Warfare’s combat systems. New players start out with one ability available per class, unlocking more as they complete a set of tasks. They start off easy, like simply using a character’s abilities a certain number of times, but they quickly become more complex and demanding. Not only does this teach you the basic controls and abilities your selected class can use, but also subtly demonstrate the various roles each character is able to perform, as well as getting you to play in ways you might not try if the challenges weren’t present.

In addition to gaining new tools of G-rated carnage, you’ll also unlock new items and collectibles the longer you play. Pretty much anything you do in a match will earn you coins you can use to purchase sticker packs. Similar to Mass Effect 3’s multiplayer, these packs will grant you consumable items you can use in several of Garden Warfare’s modes, as well as character upgrades and customizations. There are a ton of items to collect and new characters to unlock, and you’ll rarely ever feel cheated by the random nature of the acquisition system.

Actually playing the game is a real treat, with highly satisfying combat and multiple ways of tackling each map. Each of the different classes feels great, and their unique strategies all feel like they’re working together toward accomplishing a specific goal. While not as precise as a game like Call of Duty or EA’s own Battlefield series, Garden Warfare seems less concerned with getting its various combat scenarios eSports-ready and more about creating as entertaining an experience as possible. Even in failure, there’s an opportunity to see what you did wrong (as well as who wronged you), and you’re never out of a match for more than a few seconds. Everything’s so damn charming you can’t help but sport a giant grin on your face, even if the opposing team is working you from every conceivable angle.

Plants vs. Zombies: Garden Warfare features three main modes of play, taking place on around a half-dozen maps. Team Vanquish is your basic “deathmatch” mode, pitting plant against zombie in a race to be the first to defeat 50 enemies. It’s a fun mode, though it lacks the nuance of Garden Warfare’s other, more interesting gameplay types.

Gardens and Graveyards is essentially Battlefield 4’s Rush mode, simplified. The zombies need to push toward a capture point, while the plants are tasked with defending it. If the zombies take the position, the capture point moves further down the map, and the match continues until either the plants successfully defend the onslaught, or the zombies capture the final point. With plenty of choke points, multiple paths for advance or defense, as well as the ability to actually grow plants or zombies on specific points of the map, there are tons of strategies available at a given moment that both sides can take advantage of.

Lastly, Garden Ops is Garden Warfare’s take on the ever-popular Horde mode introduced by Gears of War 2. Up to four players pick a plant and defend their garden against ten increasingly difficult waves of zombies, with the fifth and tenth wave capped off by giant boss battles. You’ll also be able to use your consumable items to grow plants on specific points on the map to help you fend off the zombie hordes, making this mode the closest Garden Warfare gets to being a multiplayer version of the tower defense-inspired original.

Unfortunately, that represents the bulk of the content in Plants vs. Zombies: Garden Warfare. With only three main modes to play on a mere handful of maps and no single player option in sight, Garden Warfare feels sorely lacking in content. The budget price ($39.99 at the time of publication) and the promise of additional, free content down the road helps to alleviate some of the pain, as does the sheer enjoyment and replayability found in the maps actually provided, but I can’t help but want more options right out of the box — though that does speak equally to the quality of what’s actually offered here.

The Xbox One version of Garden Warfare gets a few exclusive options, and while interesting, they exist as mere diversions from the core experience. In Boss mode, players can opt out of choosing a class, instead getting a bird’s eye view of the entire map via the television or connected SmartGlass device. You’ll collect sun just like in the original game, and use it to plop down radar dishes or send airstrikes to help out your team. It’s a nice option for some, but it’s not nearly as fun as actually being a part of the action. You’ll also get an exclusive Splitscreen mode, though this is limited to an endless survival mode, not unlike Garden Ops. It would have been nice to take a friend with you onto the multiplayer battlefield, but being able to play couch co-op is a welcome addition.

Somehow, PopCap has done it. They’ve created a shooter that the entire family can enjoy; a game that’s simple enough for my five-year-old daughter, yet deep and varied enough to entrance even the most battle-hardened veteran. And while there isn’t a lot here right out of the gate, there are enough zombies on this lawn to occupy you until the content does come — at a nice price, to boot.

Appealing to both hardcore shooter fans as well as younger and more casual players, Plants vs. Zombies: Garden Warfare is entertaining, accessible, and oozing with charm. And while it’s only launching with a handful of maps, the lower price point and promise of free content down the line softens the blow considerably.