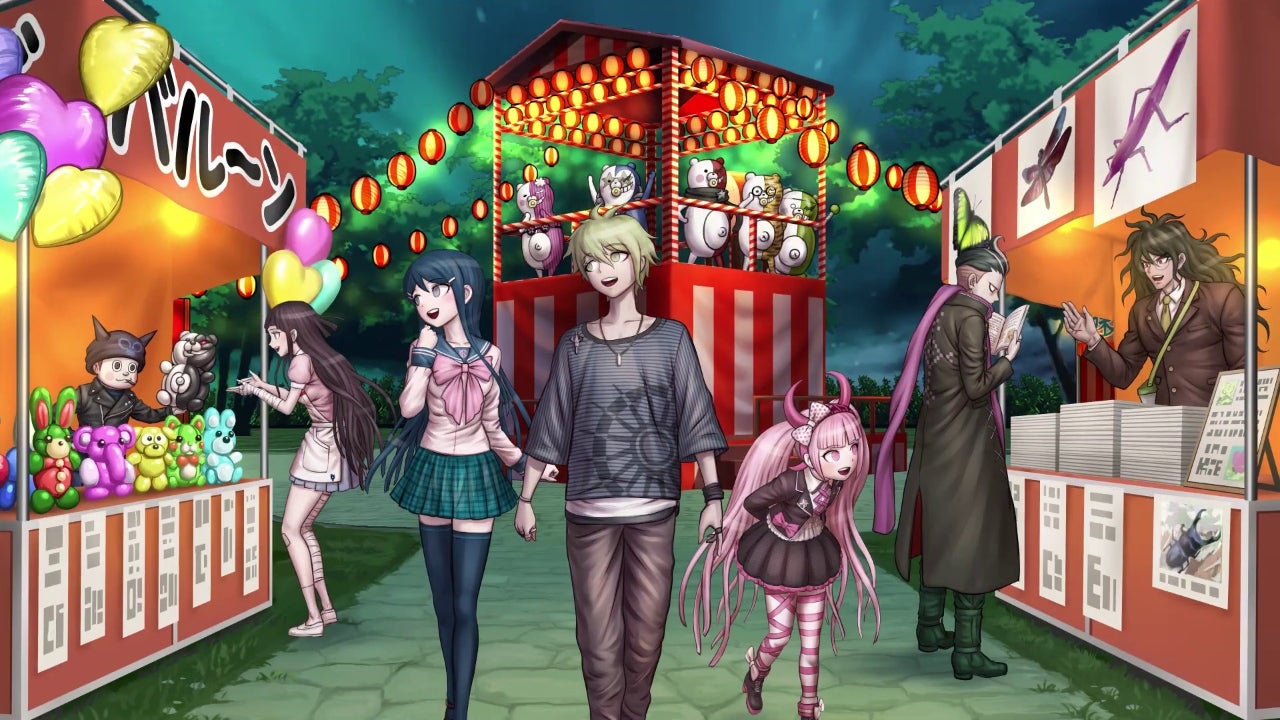 The Danganronpa games have been one of the most widely recognized and renowned games of its genre due to how entertaining, and highly engaging they’ve been since the first game’s release in 2010, which amassed several devoted fans such as myself. Now that (almost) all games are available on the Switch (including a brand new one) as part of the franchise’s tenth anniversary, more fans can enjoy each game in the well-polished gem of a series. However, despite how great the series is, the new collection does have a few issues that even I, as a longtime fan, can’t ignore. 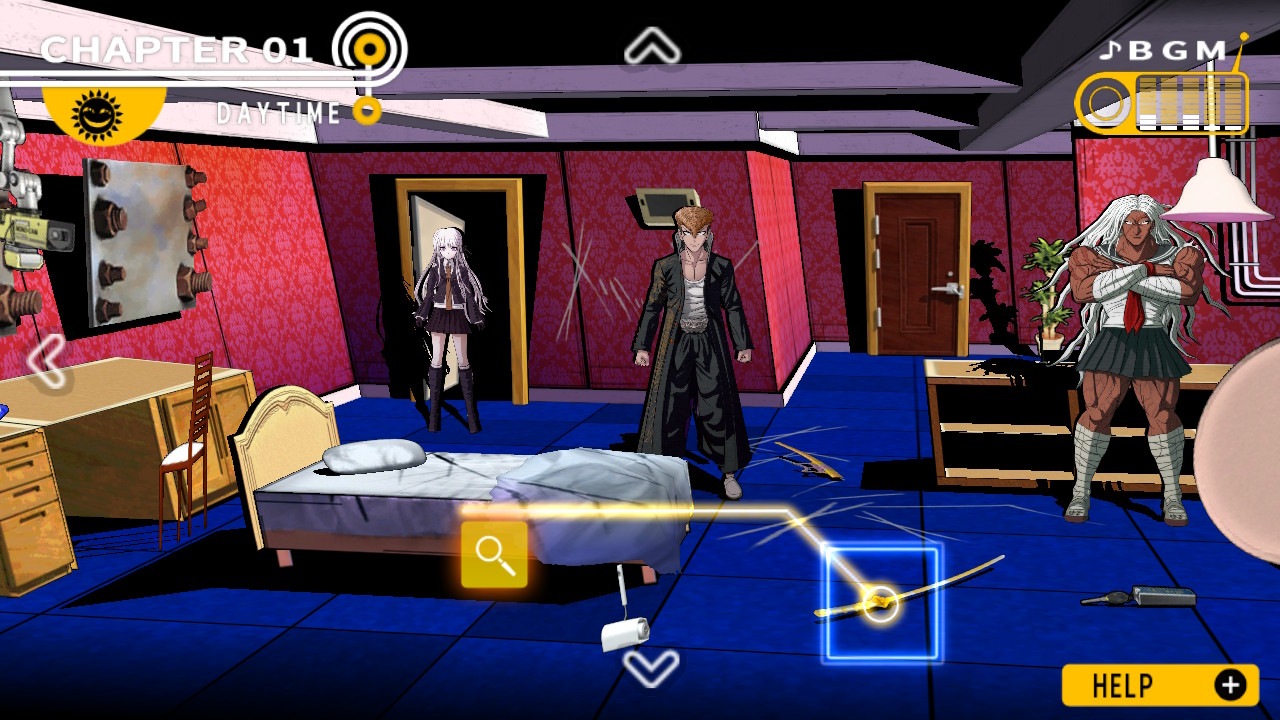 The Danganronpa series mostly centers on the elite “Ultimates” of Hope Peak’s Academy, each of which is a prodigy in their field or hobbies. The first game, Danganronpa: Trigger Happy Havoc, follows the Ultimates along with protagonist Makoto Naegi who, as opposed to beginning their high school lives in Hope’s Peak Academy, are instead forced to participate in a death game by the series mascot and antagonist Monokuma. This is the game that starts it all. The pacing, gameplay, and characters truly shine and cement the appeal of the series. Players will explore the halls of Hope’s Peak Academy from a first-person perspective. When not actively involved in an investigation following a fellow student’s death, they’ll spend time with many of the endearing characters, play mini-games, and appreciate the whimsically unique decor and art design that is to this day still unmatched.

The series’ art style is by far my favorite aspect of the games. Its uniqueness is seen chiefly through the bizarre character designs, 2D models, cartoony movements, odd pink blood, and all the atmospheric details that significantly differentiate it from similar games in the genre. Thankfully the Switch port didn’t disappoint in carrying over the visual details in all their glory. I’d also be remiss if I didn’t mention the class trials, which, while a bit inspired by the Ace Attorney games, provide players  refreshing, intellectually challenging gameplay, and aesthetically enticing moments with all manner of gimmicks to keep the player’s attention throughout. 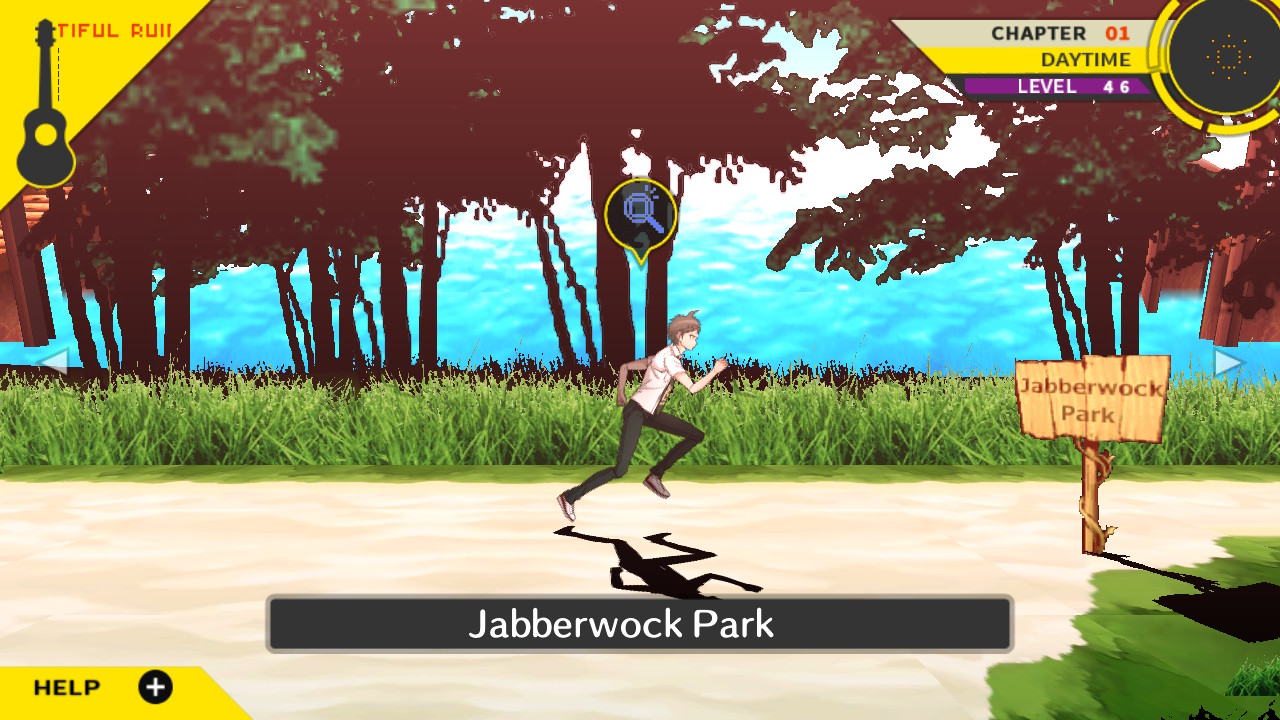 Danganronpa 2: Goodbye Despair is the game I’ve found to be the most different in the series. Its tropical setting and light-hearted aesthetics are in stark contrast to its more grim predecessor. Yet oddly enough, it is a far darker game, as the deaths and killings are more candid, gruesome, and impactful. Goodbye Despair also noticeably has the most amount of narrative twists and turns that are sure to give the player a headache (in a good way) and the finale is one of the most significant points in the franchise. Gameplay-wise, players will take control of Hajime Hinata from a first-person perspective while exploring Jabberwock Island and its five inner islands.

However, movement between these islands is in third person side scroller perspective, which is a first for the series. Other new implementations are seen during the class trials with new elements such as “Panic Time Action,” a rhythmic mechanic used in class trials to lower your opponents’ defense. Goodbye Despair’s art design also takes a noticeably different approach, primarily through its tropical setting with bright lighting and extremely vibrant colors. Overall, Danganronpa 2 brings much more to the table than the original and will have Switch players shocked and engaged at every turn. 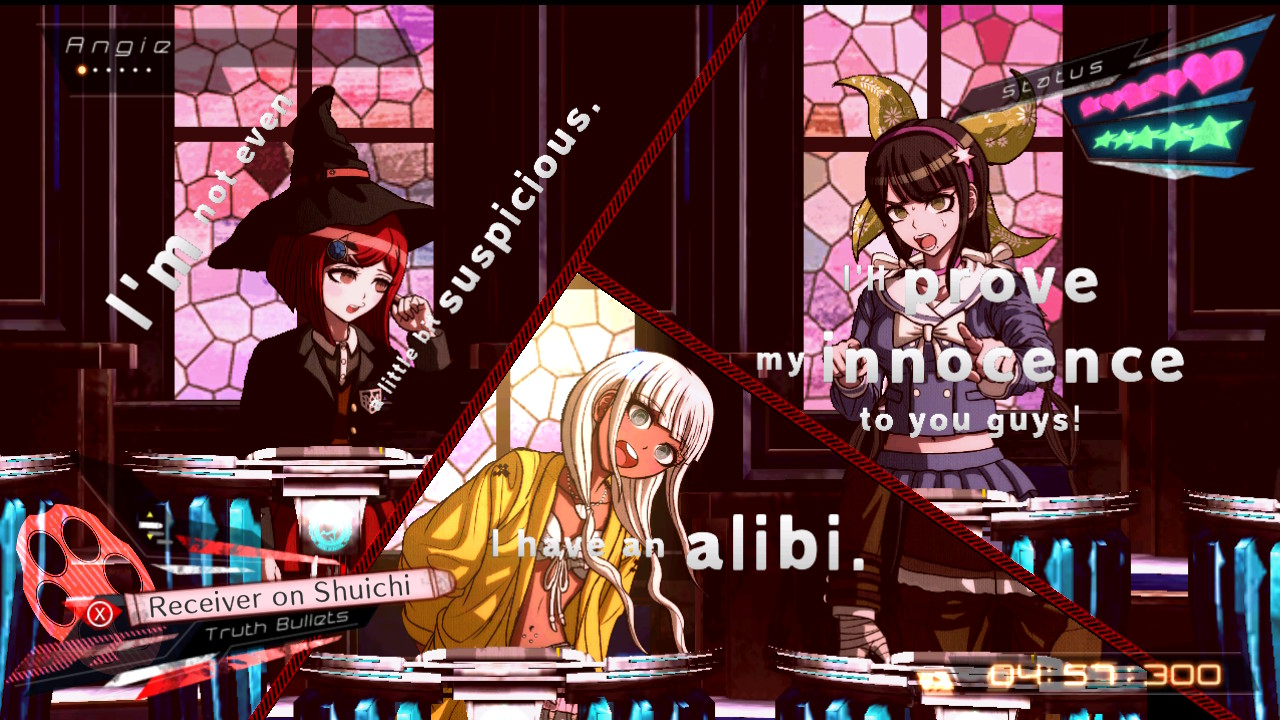 Danganronpa V3: Killing Harmony is an outlier in the series for me. I never had the opportunity to play the game until recently. As a result, I played through the game with the eyes of a newcomer who noticed all the unique differences as well as the numerous pros and cons. It’s also worth mentioning that while playing through the game, I encountered the most issues with V3’s Switch port but not any that are game-breaking. In V3, players are thrust into the shoes of new protagonist Kaede Akamatsu, the Ultimate Pianist, alongside fifteen other unfortunate Ultimates who are yet again forced to participate in a new Killing game by the vindictive headmaster Monokuma and his new five children, the Monokubs, who serve as secondary antagonists in the game.

Players will quickly familiarize themselves with the new school, which is noticeably darker and less inviting. The darker art direction is  especially  jarring when coming from a game like Danganronpa 2. Despite this, Danganronpa V3 is still by far one of the best, if not the best, game in the series. Upon completing the game, I was left aghast at how much innovation and brilliance came across from the narrative. The writers did not hesitate to take risks this time around and played with a lot more themes and messed even more with its characters. Despite this being my first and only playthrough of the game, it became one of my favorites right next to the first game.

One of the game’s best attributes is its incredible aesthetic, making it the best-looking game in the series. The visuals are immensely detailed and dynamic, and thankfully the Switch port does it justice. Classroom Trials in V3, while a bit longer than necessary at times, are incredibly engaging and will have the player on the edge of their seat throughout. I found the first and last trials to be the most impactful as they succeeded in starting the game off with a strong impression and closing it out with a wild bang. 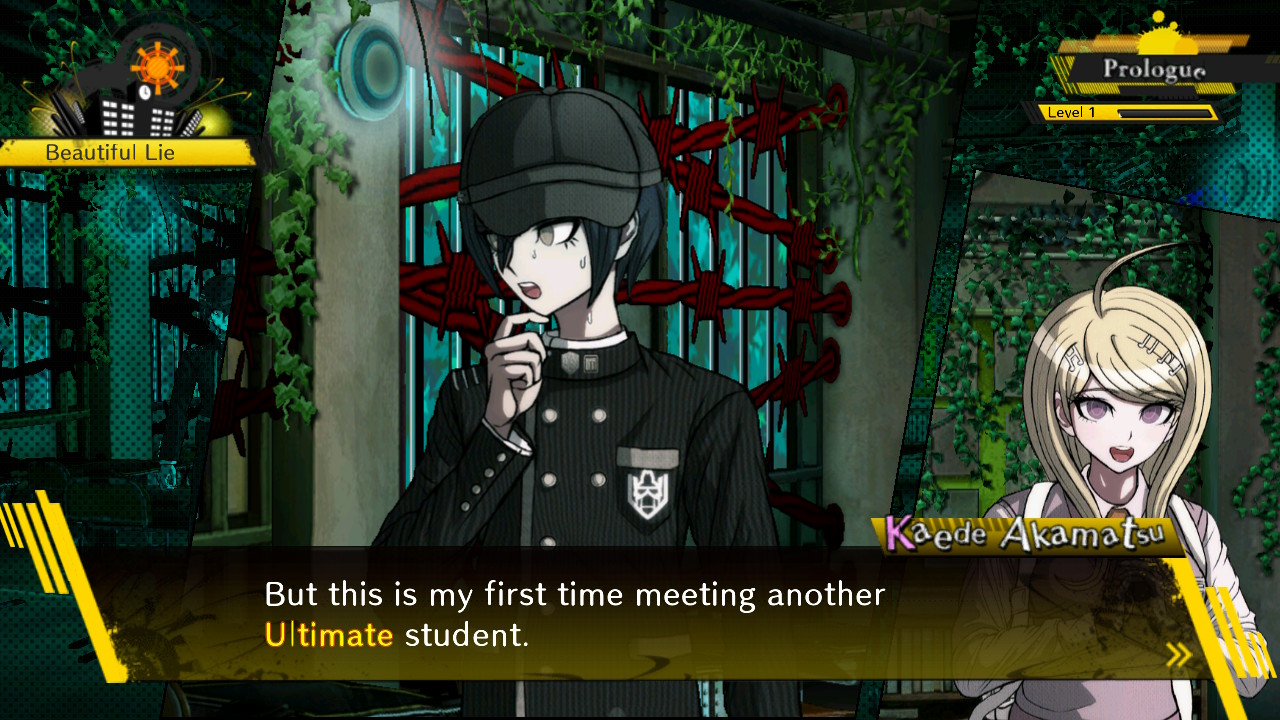 With that all said, I still noticed some flaws with the game’s Switch port. The first is the odd audio cuts in the background music when navigating the menus, specifically during classroom trials. While this issue wasn’t consistent, it is definitely worth mentioning. The second admittedly less pressing issue I encountered was the weird spacing between sentences in the game’s dialogue text. Again, while not a serious issue, it is worth mentioning primarily due to its existence throughout the entire game. Despite these issues, Danganronpa V3 is still a great game on the Switch. The story is fantastic, the visuals are impeccable, the soundtrack is phenomenal, and the voice cast (both Japanese and English) did an amazing job portraying all the characters and their ever-changing emotions.

As for what’s new in the collection, Switch players can look forward to the new gallery feature included with each game’s anniversary edition. This feature is precisely what it sounds like. As you progress through the story, you’ll be able to view illustrations, BG scenes, concepts, and listen to the game’s voiced dialogue. While it isn’t the greatest incentive to purchase the entire collection, it is a neat and appreciated bonus for devoted fans of the series. 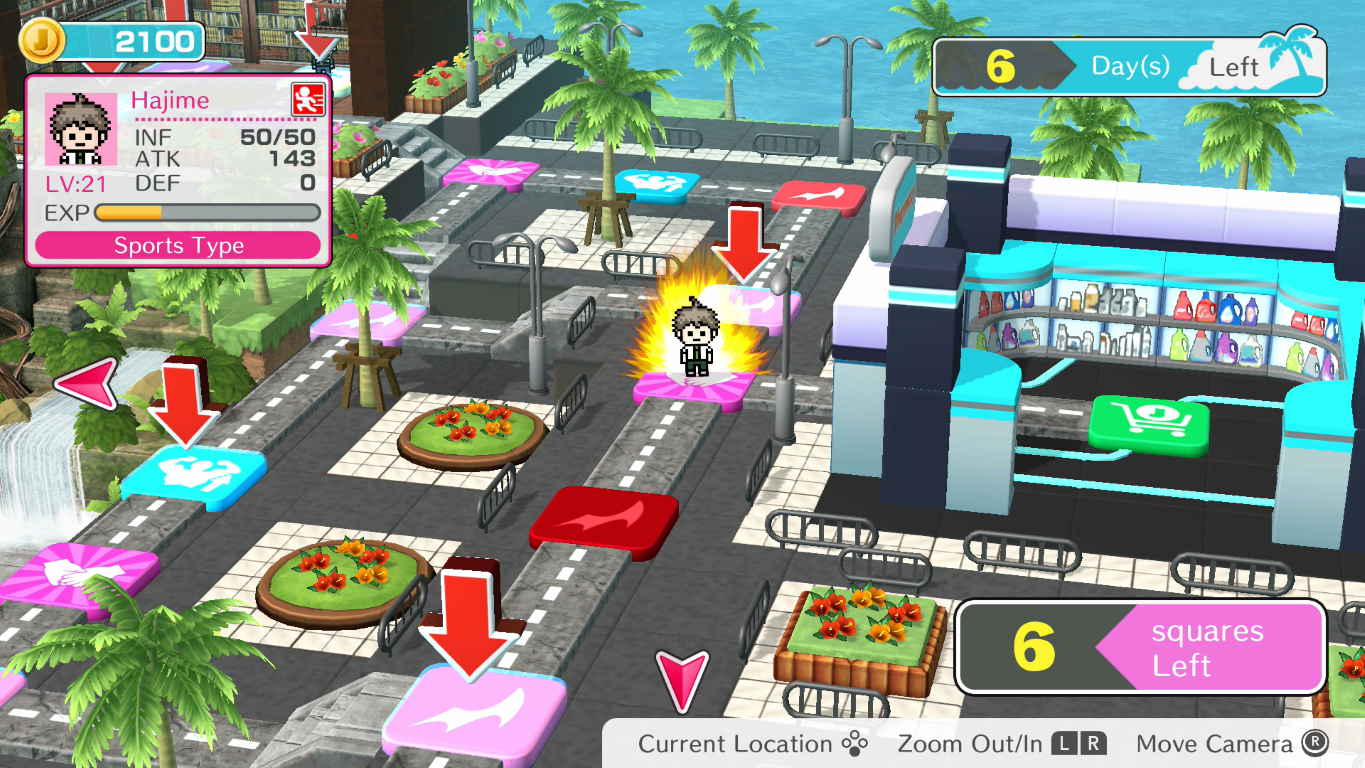 Now for the brand new game Danganronpa S: Ultimate Summer Camp. Frankly speaking, this is the most disappointing game in the series thus far. The game features every character in the Danganronpa franchise, including the weirdos from the neglected Ultra Despair Girls (kidding, of course, they’re all very important characters). Players will return to Jabberwock Island and play through the ‘Ultimate Talent Development Plan’ by choosing their desired characters and putting them on the tiles. Gameplay is done in a board game structure. The number resulting from the dice roll determines the number of your movements on the board, with the goal being to progress through each island, collecting the many ‘Hope Fragments’ as tasked to you by the Monocubs. The board consists of event tiles, upgrade tiles, boss tiles, character encounter tiles, and more. The game’s main events are the numerous pixelated turn-based battles you’ll be involved with, along with the slew of bizarre character interactions seen through the event tiles. While the game’s combat is painfully basic, the character interactions (despite most of them not being voiced) are intriguing and almost serve as official fanfiction. 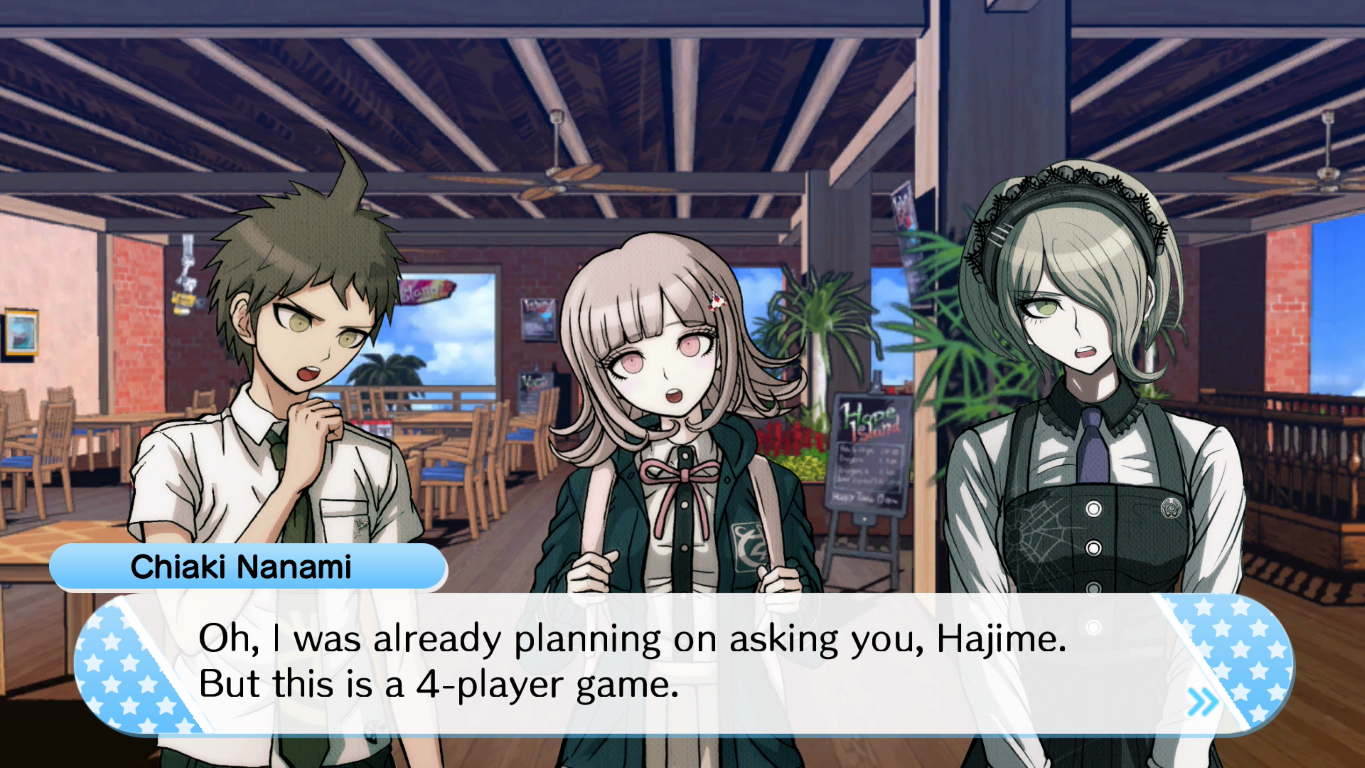 However, there are a lot of noticeable issues with Danganronpa S. For one, you better be very fond of the character you initially select, as until you rack up enough in-game currency (of which there are multiple) to use on the gachapon machine, you won’t be able to use any other character throughout. The worst aspect of this is that it is a grind fest to get said currency mainly because the game prefers players to spend real-world money on the gachapon machine through micro-transactions. What’s worse, you won’t be able to play the extra dungeon mode where players move across dungeon floors fighting more of the aforementioned turn-based pixelated battles without having a number of characters in your party, so you’re forced to grind non stop until you earn just the amount needed to acquire a singular character.

In short, Danganronpa S isn’t much to write home about. It primarily serves as a bonus game for the most devoted of fans. And while the board game mechanics are charming and well-executed, the amount of grinding necessary to unlock additional characters isn’t worth the time or money being asked from players. 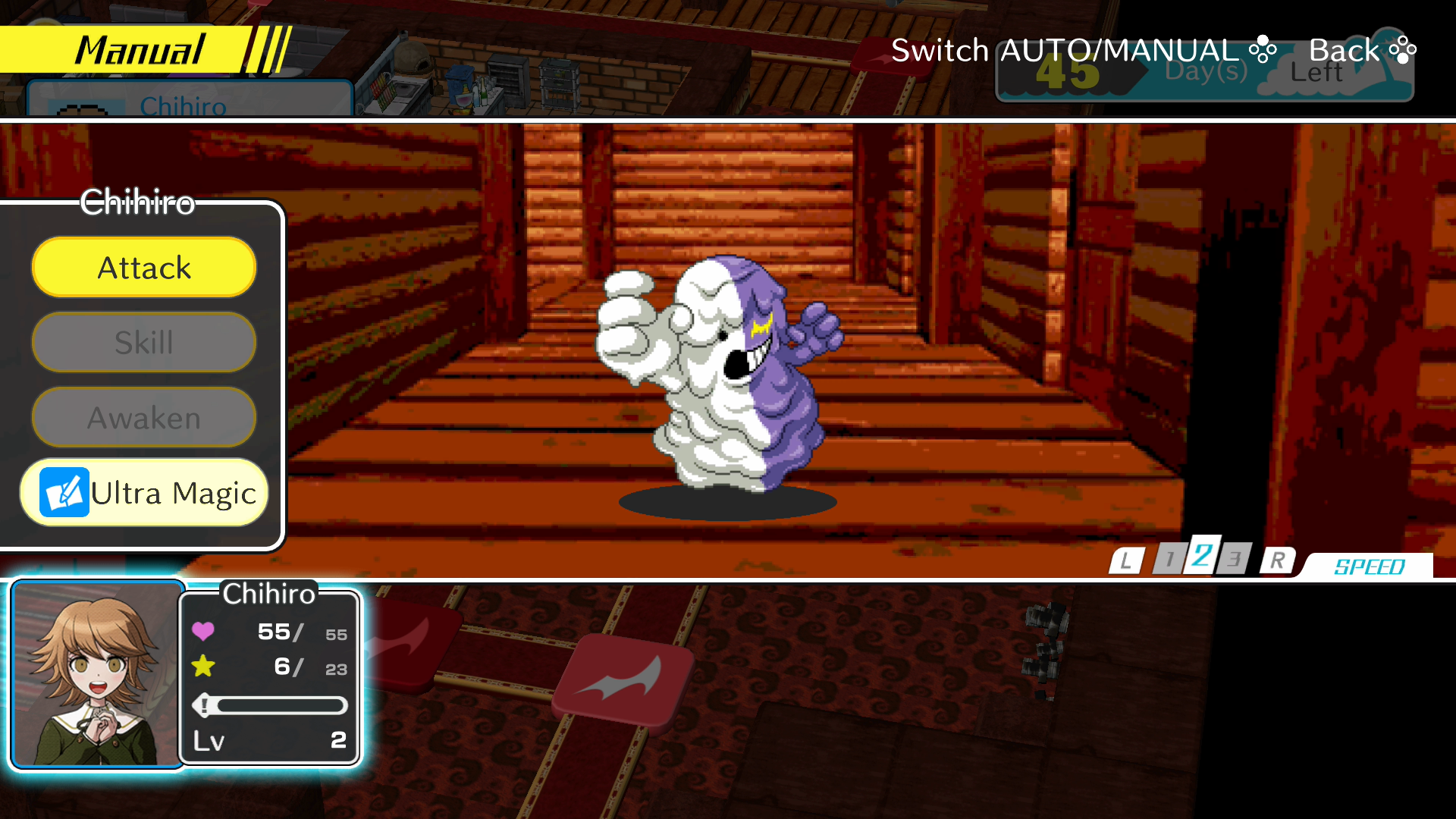 All In all, Danganronpa Decadence is a really packed collection of some of the best games I’ve played, brought faithfully and competently to Nintendo Switch players. While the extra content isn’t all that great, it is still worth it enough to get the entire collection, especially for newcomers and cult fans of the franchise.

Danganronpa Decadence is a great package of the three highly engaging games from Spike Chunsoft. While the collection comes included with some noticeable flaws, the overall package is worth every penny for die-hard fans of the series.

Abdul Saad is an avid gamer and computer geek. He's been writing for four years on news, reviews, previews, and more on multiple gaming sites. When he isn't writing or playing the latest JRPG, he can be found coding games of his own or tinkering with something electrical.
Related Articles: Danganronpa Decadence
Share
Tweet
Share
Submit