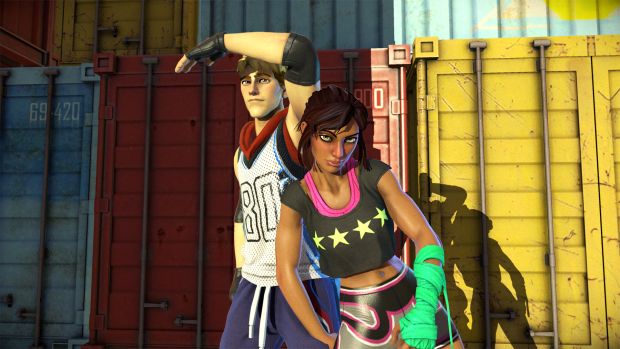 There are more than a few companies asking you to buy their previous-gen games again for your shiny new console. Call ‘em HD Remakes if you want, but it does feel like a double dip, doesn’t it?

Dance Central Spotlight is the latest in the motion-controlled get-off-your-couch adventures into the world of dance. Featuring ten tracks in the digital box, the game will put would-be rump shakers back in front of their TVs, but now with the power of the Xbox One and Kinect 2.0. If there’s anyone who can make the Xbox One dance, it’s Harmonix.

As you might expect, the heart and soul of Dance Central Spotlight is the soundtrack. The ten tracks in the pack can be found here, but you’ll notice something immediately – these aren’t last year’s hits. The team at Harmonix is working hard to make sure that the songs they bring to Spotlight are still on the charts, and most of these are still getting air play.

Jumping right in, the game kicks off with a duo of songs to help the Kinect match the beat. Starting off with some basic step-and-clap routines, the game then throws you into #thatPOWER by will.i.am. To help you ensure your audio is also synched up, you’ll also do a bit of hand-clapping not unlike previous Harmonix engagement, Rock Band. With this complete, you are off to the races.

There are only two modes in Spotlight, with the oft-skipped storyline omitted this time around. You can either burn up your living room dance floor with a few tracks, or burn some calories with a revamped fitness mode. I hit the tracks first and was happy to see that this wasn’t just a port to a new Xbox console.

Each song has eight routines, all locked behind a new mechanic called Flashcards. There are four difficulty levels, beginner to pro, but there are also four new modes including strength, cardio, stylish, and finally serious. But I’m ahead of myself – let’s talk about Flashcards.

Just like previous Dance Central titles, you’ll be scored based on how closely you match the on-screen dancer. Pick up a Flawless on a new dance move and you’ll capture its Flashcard. These captured flashcards stack up to unlock new routines that you can use in Song mode, or mixing and matching to make the ultimate fitness playlist. There are more than 60 (sometimes a lot more) dance moves to master for each song, so sometimes a little practice is needed.

In another new feature, Spotlight now lets players say “Hey DJ, practice that!” and seamlessly jump out of their song to perfect any new moves they might encounter. You can also say “Hey DJ, slow down” to nail the finer points. With the far better recognition of the Kinect 2.0, you won’t be fooling Spotlight with a weak performance.

The best improvement comes from something I dogged pretty hard in previous reviews – voice recognition. Through several hours of play, the DJ never once missed what I said. Navigating menus, selecting new songs, or picking your next routine all works perfectly. This lines up nicely with the solid swipe mechanics used to navigate the store for a less intrusive motion control experience.

The second main mode in Spotlight is one that attempts the impossible – making working out fun. The fitness mode lets you exercise using tracks you’ve unlocked for segments from ten to 90 minutes in length, letting you mix and match routines and modes across all four difficulty levels to take off the pounds.

One of the staples of Harmonix music titles is that the songs transfer across. With very few exceptions, songs in Rock Band 2 ported to Rock Band 3 for a marginal fee. We aren’t getting that level of support this time around, any tracks you’ve purchased for Dance Central 3 will transfer, gaining all of the features and modes as the ten tracks that come with Spotlight.

At the time of this writing, there are more than 50 tracks priced at $1.99 each waiting to join the ten that came with Dance Central Spotlight. If you ever rolled your eyes at the speed at which songs came down the pipe for Rock Band 3, you’ll be happy to know that those download speed problems are resolved. The Harmonix team promises larger and more current tracks every week, and based on the sampling in the store as of this writing, they are poised to deliver.

After several hours of dance I was unable to unlock the third tab in each song entitled “Classified”. Could these be additional modes? New characters beyond the six that come with the game? Who knows, but it’ll be fun to find out!

So back to the original posit that this newest generation of consoles is filling up with HD remakes. At a cost of $1.99 per track times ten tracks, you are essentially getting the game for free and the tracks at half price. This update to the Xbox One costs less than two cups of coffee and is far more than just a new coat of paint. Come for the new and improved features, stay for the far better soundtrack.