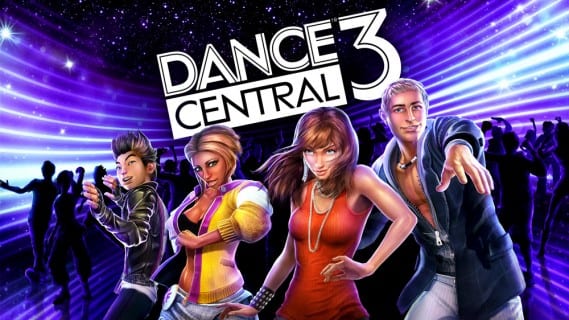 It’s been no secret that since the debut of the Kinect for the Xbox 360, Dance Central has been the best reason to own a Kinect and Harmonix innovates and improves the series in awesome ways with Dance Central 3.  For those of you who are unfamiliar with the series, Dance Central using motion-tracking technology and challenges players to get up and mirror the dance moves that they see on the screen. For a game that started out as the best display of the Kinect’s potential, the Dance Central series has become a robust IP by its own right.

When you start up Dance Central 3, you’ll be tempted to swipe “Start the Party” and just start dancing–fight the urge. DC3’s story mode is the best place to start. As agents of Dance Central Intelligence, players are tasked with going back in time to learn dance crazes from different eras in order to stop the diabolical Dr. Tan and his “dance crimes.” As you travel through each era, DCI keeps you busy by collecting “star energy,” obtained by performing well during songs, and discovering “craze moves,” which help you discover that era’s craze you need to defeat Dr. Tan. The narrative is over-the-top, cheesy beyond reason, and I loved every minute of it. It’s not a game that takes itself seriously, and the writing suits it perfectly. Each era is exciting and refreshing, as you are reintroduced (or perhaps introduced for the first time) to each era’s setting, and take on greatly-varied dance moves before moving on to the next era.

I’ve played each of the Dance Central games, and am happy to say that fans of the series have something to celebrate about with Dance Central 3’s story. Without spoiling anything, I’ll say that players will be seeing some familiar faces in Dance Central 3 in a narrative that gives context and illuminates mysteries introduced in the previous two installments of Dance Central.

After you’ve completed Dance Central 3’s story, you’ll unlock the Master Quest game mode, which challenges players to get five stars on an expanded library of songs that are rewarded with great unlockables that I won’t go into detail about. And this is only the beginning of what Dance Central 3 has to offer.

Party Time is a mode that is designed to keep things light and keep players dancing. This mode can be selected without having to navigate through any menus and requires no complicated setup. Instead, the game automatically selects songs from your library and rotates through five different mini-games: Perform, a standard routine with 1 or 2 players; Battle, a head-to-head performance with Free-4-All sections and Pose Combos; Make You Move, A minigame that allows players to create their own dance routine for a song; Strike a Pose, a contest to strike several different poses in rapid succession; and Keep the Beat, a freestyle competition that challenges you to out-swag your opponent. All of the minigames feel unique and are perfect for a party setting.

Crew Throwdown is less casual and more competitive than Party Time, but uses the same basic formula. 2-8 players ally themselves with one of two opposing crews and battle in a series of minigames until a winner emerges. The minigames are the same as the ones in Party Time, but with a definitive winner and loser at the end of four rounds. If you have a competitive spirit and some good-humored friends, this mode will easily become one of your favorites

The Rehearse Mode (formerly known as Break It Down Mode in previous titles) gives players the rundown on how to perform each song to perfection at any difficulty, and provides encouragement along the way. The mode allows for voice commands like the invaluable “slow down” option, so that you can learn how to Dougie at your own pace. And did I mention that you are coached by Usher? Yeah, I’m serious; legendary entertainer Usher.

Dance Central 3 looks great. The animation is some of the best seen in any game to date, and the colorful, varied environments feel like characters themselves in how they reflect each era and transform into sparkling neon landscapes when you enter a move streak. The characters take on facial expressions during routines that go along with their dance moves that show off their unique personalities, and their movements appear more fluid and impressive than ever before.

For how good DC3 looks, it sounds even better. The music is flawless, and additional environment sounds, like a doorbell ringing during a 90’s house party, are a great touch. All of the characters sound great, and while the dialogue is often cheesy, it is intentional, and hilariously so. The overall presentation of the game is a stark improvement from previous games and shows how far the series has come.

The motion-capturing technology in Dance Central 3 is the best in any game so far. The dance moves are more complex and fast, and the Kinect does a great job of tracking the players. Occasionally you’ll feel like you got a “flawless” score on a move that you didn’t deserve, but it isn’t the Kinect making an error, it’s the people at Harmonix being nice. Flaws in your technique will be highlighted via the character onscreen, but if you get the gist of a move correct, you’ll be rewarded. That said, many of the moves in the game are much more difficult to even get the gist of on “Hard” difficulty. Dance Central 3 goes even further with the Make Your Move minigame, as the Kinect tracks players and creates Kinect detection filters on the fly, which is something we haven’t seen in a game before.

Those who follow the Dance Central series will know that Usher and his choreographer Aokomon “AJ” Jones worked with Harmonix on two of the songs, “Scream” and “OMG,” and this shows in the songs. As I mentioned before, the hard difficulty in DC3 can be extremely challenging at times, but it also provides some of the best legitimate choreography in any dance game to date. The two Usher songs in particular, along with a few others, present one of the most exciting and difficult challenges in motion-tracking games (in fact, they’re the actual moves used by Usher during his performances, so chalk that up to authenticity). For those who have an interest in learning to dance using genuine choreography, DC3 is the best gaming opportunity to do so.

Dance Central 3 sets itself apart from its predecessors by an even larger margin with some of the added bells and whistles that make it a more fluid experience than ever before. A new difficulty setting called “Beginner” has been added that I highly recommend for those new to the series. As players dance, the game recognizes each players’ skill level and increases or decreases the difficulty accordingly. Additionally, Xbox’s new Smartglass technology is incorporated in Dance Central 3 and shows the first signs of promise for the functionality. While a dance battle wages, someone on their phone or tablet can change the settings or choose the next song to be played during a Party Time playlist. Better still is that the whole process occurs without interrupting gameplay or even so much as an onscreen indicator, which makes the ease of playing with a group utterly seamless. DC3 also has one of the most entertaining loading screens ever, which plays some funky music and gives the players a few seconds to freestyle if you want. I can’t explain why it’s so entertaining, but it just is. Finally, sharing with others has never been easier with Dance Central 3’s “Live Challenges” and Facebook connectivity. With Live Challenges players can “flaunt” their scores, which their friends will be able to see and attempt to beat, while receiving rewards each time they do so. If a player connects Dance Central 3 to their Facebook, they can easily upload and share photos with their friends without having to go through a proxy website, as they did in previous games. These small additions have major impacts on Dance Central, and take the game design from being good to great.

If I have one gripe about Dance Central 3, it’s that there simply aren’t enough songs. There are several reasons this complaint is not well-founded, after all DC3 has more than 45 songs, which is more than either of the previous games, and you can import all of the songs from the previous titles, plus any DLC you’ve downloaded, which amounts to more than 150 tracks. But for the fans who have already played to death every song that Harmonix has released in the past, or for those who are new to the series, they’re looking at the 45+ new songs offered in the game. For everything that DC3 has to offer, 45+ songs might not be enough tracks to enjoy every game mode before running out of new routines. Of course, players can extend their library of new songs by waiting for the DLC tracks that Harmonix will undoubtedly release in the near future, or pre-order from one of several different retailers for bonus tracks (which will be made available to everyone sometime in the future), but for now, after you’ve burned through the 45 songs, you’ll have to play the waiting game.

Dance Central 3 isn’t just the best reason to own a Kinect; it is the reason you need to own one. On the surface, Dance Central 3 is a quirky motion-capturing game, but deep down it’s a love letter to the gaming community that reminds us why we play games–because games are fun. While other dance titles are little more than party favors, Dance Central stands out as a legitimate franchise with a deep respect toward dance that penetrates every corner of the game. Fans of the series will no doubt consider Dance Central 3 to be the best in the series and the best Kinect game to date, and I highly recommend those who have yet to experience Dance Central to grab some friends, release their inhibitions, and enjoy one of the best experiences in recent gaming history.