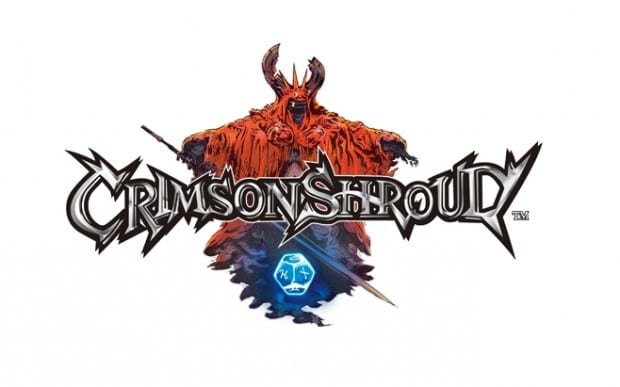 Crimson Shroud represents a very promising sign for the future of the Nintedo eShop. Developed by Level-5 and acclaimed RPG director Yasumi Matsuno, Crimson Shroud is a very good digital rendition of the D&D table top genre. This is a true RPG, complete with turn based battles, a diverse cast of characters, monsters galore, but with the added twist that a d20 dice roll decides the effectiveness of your decisions and the battle. Add to that a story that gives you choices , with a narrative that is designed to emulate the Dungeon Master role, and you have a unique RPG for the North American market.

Crimson Shroud is not an RPG for beginners, but the familiar turn based system means that it will be accessible to most gamers. However, Crimson Shroud does offer a very deep and strategic combat system. The main character’s themselves do not level up, instead you gain stats and powers by equipping better weapons and armor. Certain weapons will enable players to utilize different types of magic and abilities. Adding to the strategy is the game’s chain attack system. Almost all of the magic and abilities in the game are tied to a certain element, stringing together attacks that complement other elements can create devastating combo attacks. Mastering this system and then knowing which elements to use against which monsters will determine your success in battle.

Since Crimson Shroud is designed to play like a table top RPG the dice roll plays a large part in the game. Crimson Shroud literally displays the dice on the bottom screen, where you can either swipe them with your stylus or hit a button to begin the dice roll. Dice rolls determine the effectiveness of magic attacks and abilities. On top of that you will be presented with several choices throughout the game; the outcome of those choices will rely on the roll of the dice. The fact that both the characters and the monsters look like table top figures, complete with a base to allow them to stand up, only helps add to the board game presentation.

The game does have a storyline to follow, although I wouldn’t call it epic on any scale. Instead you mostly deal with the three main characters and their quest to find a valuable artifact called the Crimson Shroud. The interesting thing here is not the plot itself, but instead it’s the choices given to you throughout the story. Each area of the map will present you with options, do you want to try to ambush the monsters that don’t see you yet or sneak around them, is that odd looking chest in the corner worth opening? The outcome of decisions like these all depend on the dice roll.

Visually Crimson Shroud is good for an eShop game, but it’s not up to the same level you would expect from a full retail release. The sound is another area that is serviceable. The lack of voice characters in a modern RPG may annoy some, but I honestly didn’t mind reading everything instead. And since this is designed after a D&D RPG there will be a lot of reading.

Clocking in at a little over 8 hours, Crimson Shroud is not long by RPG standards, but the silver lining is that you can buy it for just $7.99 on the eShop. Doing the high level math, that works out to about a $1 per hour of play. Adding to the game’s length is a game+ mode that lets you start with all of your gear. This price point and the above average quality of the game is why I say Crimson Shroud is a good sign for the things to come on Nintendo’s eShop. If you enjoy either RPGs or table top games then you should definitely check out Crimson Shroud on the 3DS.