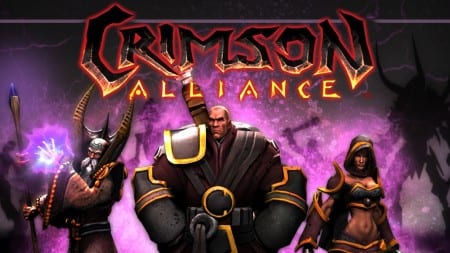 In the land of video games, it always amazes me that a plot-line starting with “A wizard, a rogue, and a warrior” isn’t immediately followed by “…walk into a bar.” Ultimately that is what Crimson Alliance, a new XBLA title from Certain Affinity, is all about. Well, perhaps the foreign land of Byzan instead of bar, and instead of walking they’re running as fast as possible and leaving a trail of death and dismemberment behind them.

The basic action/RPG gameplay and visual presentation mirrors games like Torchlight or the much anticipated Diablo III; the key difference is that they do away with all that messy depth. If this sounds like a bad thing, you should read on. Crimson Alliance does what a lot of other games don’t – it is unapologetic in its presentation, and puts up rather than shuts up. While there are hidden rooms and treasures to find on almost every level, there is no creeping around, side quests or path-finding – the game is all about unabashed combat regardless of the character you select. Furthermore, you aren’t subjected to five minute CGI cutscenes during major plot points: instead you hear banter and background between the three protaganists while watching slideshows of beautifully painted scenes that give the game a very organic feel. Some of the comments have even had me laughing out loud, even if the main plot twist is plainly obvious.

[singlepic id=3328 w=320 h=240 float=left]As you travel from waypoint to waypoint following the progression of the story, you can revisit any previous levels at any time, and even access unlocked levels with other characters. There are shop levels, plot-based levels, and even a few challenge levels which reward you with an exceptional piece of equipment for surviving. Each combat level rates your performance as either bronze, silver, or gold. Your playtime is graded based on three overall factors: time, hidden area and item  discovery as well as combat. Combat is easy to do, but hard to do well. Much like the music game genre, there is a multiplier at the top of the screen, and as you earn kills without being hit your multiplier climbs. The highest it goes to is x8, and every time you are hit you’re pushed down at least one level.

One of the other things that this Action-RPG-Lite game does right trying is not saddling you with stats management or a complex inventory system. There are three item types (which vary depending on class): your main weapon, your secondary weapon, and your armor. Each of the three will boost up to four stats in a range from 1-20 : your three basic attack types (damage, stun, clearing) as well as your health. There are also special powers available on some equipment, and each item will show its impact to your overall stats. Every 5 points in each respective category earns you a significant improvement to the skill i.e. thrown daggers may fly farther and faster at level 5, 10, 15, and 20 on top of the natural damage increases that each point earns. You can also switch your equipment without going to an inventory screen, but the downside is that the game doesn’t pause during this process.

Certain Affinity also saw fit to include four types of single-use items that help you during battle, and each is assigned to your directional pad and triggered with the RB button (more on that later). You have a health totem which refills your health over time based on proximity, an automatic turret that pelts enemies in range, a fiery axe which is thrown like a grenade, and monster bait. You can carry a maximum of three of each at a time, and if you’re playing multiplayer you can even drop them to share with others by holding the RB button down.

[singlepic id=3323 w=320 h=240 float=right]The pricing is a little different for Crimson Alliance in that the full game including all three classes will cost 1200 points, but if you just wanted one class then each can be individually had with full access for 800 points. You can still play with friends that have other classes, but your local accounts will be restricted to their own license of the game. One other MS point tie-in is the ability to buy gold from the store, much like the micro-transactions we see on other marketplaces such as the Apple App Store. For 80 MS points you can purchase 40,000 in gold to buy better equipment. Is this a hefty cost? Not really, and while I’d like to say it’s just a cash-grab it does mean that if you wanted to replay the game with a different class you can bypass all the grinding involved to make enough money to buy your preferred equipment.

I suppose the question of value is really the question of quality – what is quality? It is the measure of delivering to people’s expectations. This game isn’t Diablo III or even Torchlight. If there were one game I’d compare it to it would be Castle Crashers – it doesn’t have the same art, but just like Castle Crashers the combat is accessible, the upgrades are simple to understand and it allows you to balance and tweak your combat style based on your equipment.

[singlepic id=3325 w=320 h=240 float=left]Crimson Alliance isn’t without fault, mind you. Gold, for instance, is earned more sparingly than I would have liked. It may be due to driving interest in spending MS points for it, which seems almost underhanded. Another sticking bit is that while you can (and will) replay levels, there is no randomization – the gameplay gets repetitive. Perhaps this helps the predictability to help you get better rankings, but it can get boring. The levels are all well-crafted but by no means are they completely unique, and the same can be said for your opponents. The most powerful items in the game are interesting and you can certainly find a balance that works to your gameplay style (and even switch it up), but the lack of having “random loot” means that once you’ve made it to the end and completed the challenge levels, even bumping to a harder level doesn’t unlock any new or special items (that I’ve found). All of this criticism falls on its own sword though- this isn’t a 5 year development with cash to burn. It’s an arcade game which delivers a lot of fun at a reasonable cost.

One other improvement I would have suggested is allowing the gamers to change buttons. I found that having my RB trigger items and my LB trigger my “ultra” move it didn’t work for me as well as I would have liked.. I would rather have had my items trigger with a directional press, and perhaps allowing me to switch weapon types on the fly with the RB. This isn’t a knock against the game, but spending as much time as I did with the Crimson Alliance, this would have added some neat dynamics that could have maximized the on-the-fly equipment change effect.

[singlepic id=3324 w=320 h=240 float=right]All in all, Certain Affinity should be proud of their creation: Crimson Alliance is a solid game that keeps the pace moving and balances the three classes very well. With both Live and local co-op, natural ranking tie-ins with your friends list and a visceral and fast-paced action, it is most certainly worth the price of admission. Whether grinding for or buying gold is your choice, I’d rather have seen bigger payouts from the game rather than the marketplace. I’d recommend Crimson Alliance to anyone who’s looking for a game that doesn’t bog you down with a lot of overwrought characters.  If you enjoy beating your friends high scores, playing co-op or just having a game that you can sit down and enjoy in small excursions, this is definitely a keeper. Is it deep? No – but it doesn’t really pretend to be either.