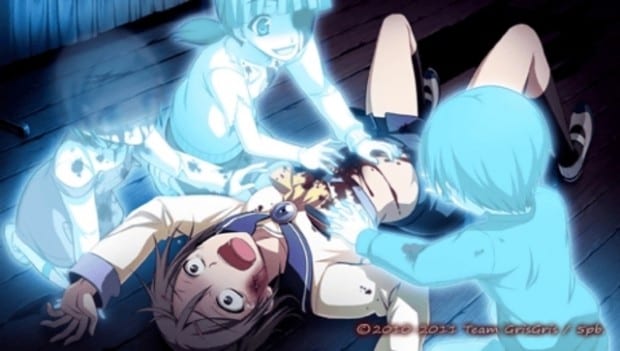 Corpse Party: Book of Shadows is marketed as a video game and it is being brought to the North American market as an adventure game. But this sequel to the original Corpse Party has a lot more in common with the choose your own adventure genre of novels than it does with the video game world, fans of this genre would call Corpse Party a visual novel. Your enjoyment of this title will come down to two main things, do you enjoy reading almost an hour’s worth of text prior to any actual gameplay and do you enjoy quirky sexed up Japanese horror stories?

For the most part Corpse Party: Book of Shadows does play a lot like a classic adventure game. Unlike the original Corpse Party, Book of Shadows is a first person point and click adventure game. Once you are given control of a character you have to search around your environment looking for items and clues that you can use to solve puzzles. Sadly that is the extent of the gameplay elements. You don’t fight monsters or even run away from them. Everything that happens on screen will be a direct result of you finding a clue or item in the game and then using it. You do get to make decisions throughout the story, but that alone doesn’t add much to the gameplay.

[singlepic id=10631 w=320 h=240 float=left] Since the game is so light on actual gameplay it has to make up for it in other areas and it does that through its story. This is unfortunate because I found the storyline to be completely unrelatable and a bit of a mess. Sure this version of the game is a port from Japan and yes this is a sequel (technically most of the game is a prequel). But I am not kidding when I say the game opens with almost an hour of text to read through. If the story were solid this would not be a bad thing. The problem is that the hour is filled with an uninteresting story about a teenage girl and her girl friend experimenting with their sexuality (I know that description may not seem bad, but the execution is off). Most of the first thirty minutes of the game are taken up by the main character denying her feelings for her friend, all while she lets her friend give her a bubble bath massage. Before you know it (Please insert a sarcastic tone) the hour is almost up and somehow the two girls are sucked through a magic portal into a demon realm. Did I mention the story is quirky and Japanese? From there you get to play as 6 other characters all of whom were sucked through the magic portal. Trust me when I tell you that their stories are not much better.

Visually the game is serviceable. Most of the storyline is presented through the use of static 2d anime style images. When you are given control of a character you are then able to look around a flat 2D environment that is fairly well detailed. Most of the game is entirely too dark though and playing this game in the daylight is next to impossible.

[singlepic id=10632 w=320 h=240 float=right] The audio in the Corpse Party will be a highlight for people who enjoy original Japanese audio tracks in their games. Almost every single line of the story is spoken by a Japanese voice actor. A word of warning though, the voice acting actually made me turn the sound off because some of the odd screams and moans that flowed out of the speakers made me get more than one odd stare from my wife. But purists should love it.

Corpse Party: Book of Shadows is definitely not for everyone. People who enjoy a heavy dose of Japanese in their horror stories and who don’t mind that they are playing a video game that doesn’t have much game in it will be able to enjoy Corpse Party: Book of Shadows. As for me I found the storyline to be entirely too juvenile and non-sensible. Once you figure out that you don’t enjoy the storyline then there really is no gameplay left to make up for it. I don’t hate the concept of a visual novel, but it had better be a damned good story to keep me interested and Corpse Party: Book of Shadows falls way short. So if you are the type of person who loves reading Japanese horror then please add about 40 points to my final score. Everyone else would be better off replaying Myst.