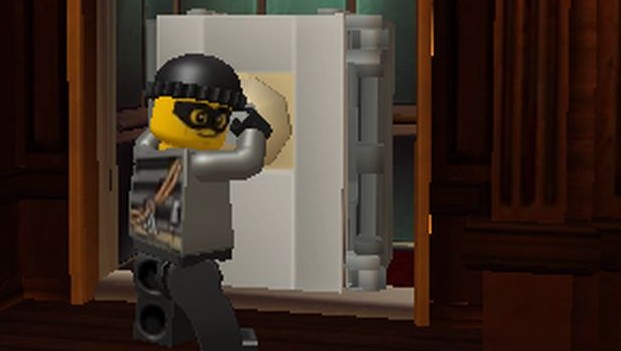 Before I delve into the details of TT Fusion’s latest 3DS title, I’d like you to check out my review for LEGO City Undercover right here. Go ahead — take your time, read it, and come back here when you’re ready.

Finished? Good, because now you’ll understand when I say LEGO City Undercover: The Chase Begins for the 3DS is basically a less good version of that.

Notice that I used the phrase “less good,” rather than “worse.” The Chase Begins is a prequel to the Wii U open-world action-platformer, but it might as well be a port. The plot covers all of the beats that lead up to Undercover Wii U — why Natalia’s in witness protection, why Chase left the city, why there’s bad blood between Chase and Rex Fury, etc. — but it’s more or less the same “Grand Theft Auto for kids” gameplay, just pared down for a handheld platform..

[singlepic id=11709 w=320 h=240 float=left]You’ll unlock the same costumes, each granting Chase the same abilities — the burglar can break into locked doors and safes, the farmer can grow plants and ride pigs, and so on. Switching between these costumes is necessary to get through each of the levels, and the only way to collect all of the hidden valuables is to go back to areas you’ve previously visited with newly unlocked disguises.

Combat is also largely lifted from the Wii U version. It’s overly easy — essentially, mashing a button to throw baddies left and right, with the occasional counter or grapple thrown in for good measure. After throwing around an enemy like a rag doll a bunch of times, you’ll slap a pair of handcuffs on them to take them down for good. It’s really hard to die unless you just stand there, and even when you do, you’ll just reappear right back where you left off, minus a few studs as a punishment for failure.

You’ll explore the same sections of LEGO City, but you’ll visit smaller, slightly retooled areas in a different order. The plot is much shorter than Undercover — six hours here versus the fifteen or so of Undercover. It also lacks much of the charm  — voice acting only accompanies cutscenes, leaving much of the game silent, and the numerous pop culture and film references are nowhere to be found. You’ll find the same secrets, fight the same enemies, drive the same cars; for all intents and purposes, it’s the same game. Everything just feels a bit… off.

You’ll still explore LEGO City — but each part of the city is separated by loading screens, rather than being one open massive world. Each section’s missions are contained within that area, meaning that you won’t get the sort of epic car chases that take you across the entire city — in fact, one car chase in particular was just a small, meandering, oblong oval road through the forest, and the bad guy just kept driving around it until I ran him off the road.

It must also be fog season, because The Chase Begins is absolutely shrouded in thick blankets of dense, sight-obscuring grayness. Buildings less than a few dozen feet away disappear into the ether, only to appear when you get closer. Busy sections of the city are also burdened by rather large framerate dips. It’s never game-breaking, and the fact that it still conveys a sense of scale on the 3DS is impressive, even if that scale is less impressive than Undercover. Even so, when compared to the relatively smooth and clear skies of the Wii U version it’s definitely noticeable.

I typically don’t mention the 3D effect when I review 3DS games — most of the time they don’t add much, other than a nifty effect I switch off after a few minutes. Here, it’s pretty painful. Most of the time it doesn’t get in the way, but whenever there are large amounts of 2D text surrounded by 3D effects it causes a cacauphony of failed depth perception that makes my eyes turn somersaults in my skull. I quickly turned the slider off and left it there. It doesn’t affect my final evaluation in any way — again, it’s a largely ancillary effect that neither adds nor subtracts to the experience of many 3DS games — but it’s worth mentioning that it seemed especially more problematic here than in most other titles.

It’s not that the game isn’t fun — The Chase Begins is a decent, if smaller and much shorter, facsimile of the LEGO City Undercover experience. Yes, you’ll largely be doing the same stuff that you’ve done before if you’ve played Undercover on the Wii U, but it mostly ports over pretty well. The problem is that certain sacrifices had to be made to replicate simlar gameplay, and not all of them pay off. If this is your first trip to LEGO City, or you’re clamoring for more of the same action that you can take on the go, you’ll find it here — just don’t expect to get the best version.