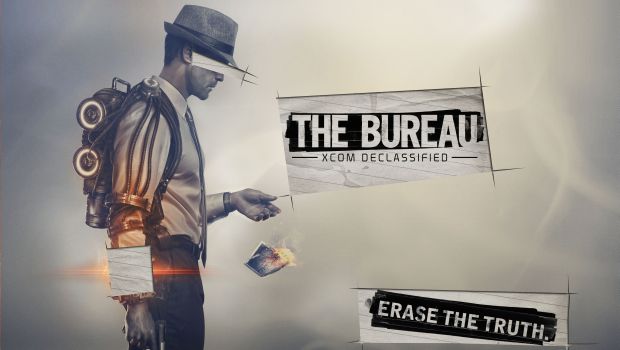 The Bureau: XCOM Declassified was met with severe scrutiny upon its announcement way back in 2010. Since then, The Bureau has changed significantly, including a switch from being a first-person game to instead being a third-person experience. No matter what, we all knew that The Bureau was going to have some big XCOM shoes to fill. Developers 2K Marin can thank Firaxis for that as they released one of the best games of 2012 in XCOM: Enemy Unknown. It’s clear that the odds are seemingly stacked against The Bureau coming into its release, but the real question is: can 2K defy those odds?

[singlepic id=15694 w=320 h=240 float=left]The Bureau: XCOM Declassified sets the storytelling tone early on as you meet the main character, Agent William Carter, and other members of the eventual “XCOM” operation. From the introductions, you’re met fairly quickly with the facts of Agent Carter’s depressing past. Simultaneously, you begin to realize that you’re about to be following one of the most lifeless and uninteresting protagonists for the duration of The Bureau. Sadly, that early impression remains true as Agent Carter never becomes relatable or even remotely likable in any way. It isn’t just him, however, as every character in the game feels either underutilized or lacking any form of interesting characteristic. While the character development is mostly to blame for these issues, it doesn’t help that the voice actors turned in a barren performance.

The premise in The Bureau has been one that has interested me for months now. Early on in the game, despite the poor characters, I couldn’t help but be hooked to the B-grade sci-fi story that was forming. It starts off fairly simple with the standard alien invasion. But as things begin to trudge forward, you start to realize that maybe there’s a little more than what you think going on. When this “little more” reveals itself, I was taken aback by how incredibly stupid it was. But as the game continued forward, I began to enjoy the stupidity to the point where I was chuckling at the obviously very serious late-game cutscenes. While the story does indeed squander its potential, it at least garners a few laughs all the way up until its senseless ending.

Character development was by far one of the best things about Firaxis’ 2012 XCOM reboot, and it seems like 2K Marin realized that. But the thing they didn’t realize is just how to make their own characters interesting. I’m not talking about the story related characters, though, I’m talking about the squadmates you take into combat. Your [singlepic id=15695 w=320 h=240 float=right]mates not only lack any kind of defining story, they also lack any kind of personality whatsoever. There’s absolutely no attention paid to your partners in The Bureau and that ultimately makes it very difficult to care about them.

Thankfully, you can change your mates’ names and uniform colors, but that’s about as far as The Bureau goes in attempting to establish a connection between you and the men you take into action. It would have been nice to see Agent Carter interact with his partners outside of combat. Or hell, even in combat it would have been nice as it seems like you don’t have a single conversation with your teammates throughout the entire game. You can send members of your crew out on separate missions, and they level up and return to you with some sort of reward. Character development, in a gameplay sense, is handled well. You can level up each of your characters, including yourself, and along the way you encounter some unique abilities.

If you were worried about working the classic XCOM strategic elements into a third-person shooter, fear not. 2K Marin has done just that and done it well. The setup is surprisingly simplistic and very accessible. As you approach a combat situation, before any enemy is alerted, you can pop up your “Battle Focus” menu. From there you begin to select certain actions for you and your squad to perform. The Battle Focus design is a circular menu that you rotate your left stick around to select abilities. This system works fairly well, with the only issue being that using the left stick to select an ability can be occasionally inaccurate. There were a few times that I accidentally selected an ability besides the one I wanted. Ultimately, that issue begins to wear off once you start to realize how fun the combat truly is.

[singlepic id=15696 w=320 h=240 float=left]I was legitimately surprised at how often I enjoyed spreading my soldiers apart and then activating a certain line of abilities to take out the opposing enemies. The combat and its setup are reminiscent of Mass Effect, but thanks to its Battle Focus feature, The Bureau diverges by having more varied and explosive possibilities in combat. The feeling you get after taking down an Elite Muton by combining your squad’s abilities, all while just skimming by on health, is one that makes you want to put your controller down and do a Tiger Woods-esque fist pump.

This late in the generation, visual expectations for any game that runs the Unreal Engine are going to be low. If you go into The Bureau with that mindset, you won’t be too disappointed by the bland visual style. There are definitely some nice visual set pieces that pop up, including some varied environments, but the Unreal Engine clearly holds the game back from achieving its true visual potential. However, the Xbox 360 versions does maintain a solid frame rate of 30 FPS. Also positive is the well-designed interface, something that’s key in a strategy-focused game. Every inch of the screen is used perfectly, but the UI never becomes too in-your-face that it distracts from the combat.

The Bureau handles pathfinding generally well. A button-press on the D-pad displays a marker to identify your destination. But it is absolutely bewildering that this assistance is not available for certain sections of the game. At one point, I was required to find a certain area that I had never been to, and there was no marker to help find it. [singlepic id=15697 w=320 h=240 float=right]I then wandered around the base for upwards of an hour and a half wondering where in the hell to go. These occasional situations do a great job of killing any kind of momentum that the game builds.

It’s a tall order for 2K Marin to compete with Firaxis’ excellent XCOM: Enemy Unknown. But in the end, The Bureau is a completely different game that stands on its own. While they didn’t make the next game of the year, 2K Marin has crafted their own XCOM adventure. It’s one that features some lifeless characters and a nonsensical story, but also some of the best squad-based third person shooting you’re going to see all year.