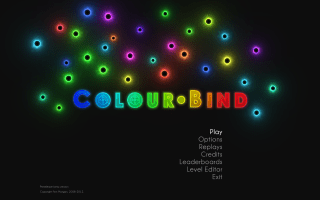 One of the problems with combining two different genres into one game is maintaining an even quality. Even if a developer does a great job building one half of the game, the other half can bring the entire game down. This is the problem confronting Colour Bind, a puzzle-platformer in which excellent puzzles are shackled to the corpse of a bad platformer.

First, it should be noted that Colour Bind has a pleasantly distinctive look to it. A basic level will consist of a set of gray platforms, with various colored shapes strewn about. This works to the games advantage, because the use of color informs you what parts of the map are pertinent to solving the puzzle. The colors themselves are bright and saturated, which both looks really nice and draws your eyes. In a concession to players who are colorblind, the game allows you to imbue each color with a distinctive pattern. I should point out that the games menu screens are actually really beautiful. I know that seems like a silly thing to applaud, but it really looks like a lot of care went into the menu design. On the other hand, the games music is soothing, but largely forgettable.

[singlepic id=9378 w=320 h=240 float=left]The puzzles in Colour Bind start fairly simple: you pilot your small cart to the small prismatic triangle that serves as your goal. You can move left, right, hit the brakes, and embiggen your cart’s wheels to jump. Then the game introduces a twist: gravity affects different objects differently, depending on their color. Blue objects might fall to the ceiling, green objects to the floor, and red to the right. Colors can be combined, too. A yellow object (which is both green AND red) will fall toward the bottom right. Oh, and if that wasn’t complicated enough, lasers in the environment will change the color of an object in their beam, including your cart.

This wrinkle allows for some really awesome puzzles. In one, you pilot your cart around the outside of a circle, using lasers to change your cart’s color, ensuring that your cart is always falling toward the center. In another—a particularly beautiful puzzle—you have to traverse your cart across a tip of a wave of platforms as they rise, change color, and fall back down. The puzzles can get quite challenging, but none of the 50 puzzles were frustratingly hard to solve.

Unfortunately, knowing the solution to a puzzle is only half the battle—you still have to get your cart to the goal. This is where the game really falters. The controls for the cart are very imprecise. The cart doesn’t so much roll as float, and will often get caught in corners, until you jump away to free it. Jumping will almost universally result in your cart rolling over, leaving you mashing the brake button to try and get the thing to stick onto a narrow platform, instead of bouncing off. One of the most frustrating aspects was the way the controls arbitrarily reverse when the cart is on the ceiling. This would make sense, except that the controls remain the same on the ground even if you flip the cart over.

[singlepic id=9375 w=320 h=240 float=right]Another problem with the gameplay is that for a gravity based game, the physics can seem kind of arbitrary. At one point, I encountered a puzzle where flipping a switch would fling you upward. However, the force of the throw was never the same. One might think that the faster you run into the switch, the harder the throw, but that wasn’t the case. Nor was the opposite. I was left just pressing the button and hoping I got a “good” throw.

I learned to dread when the game asked for precise movements, or anything resembling specific timing. The best platformers are challenging, but they are challenging because they ask you be precise, with tight controls. In Colour Bind, time and time again I found myself skipping off a platformand slamming the F button to reset the map. Again.

[singlepic id=9376 w=320 h=240 float=left]Colour Bind includes some extra goodies that add to the replay value, for those with the fortitude to suffer the poor controls. Each level can be replayed for faster times, earning you medals and achievements.  You can save and watch replays or check your best times on the leaderboard. You can even play some puzzles in the games co-op mode, if you can get a friend to endure the game’s controls.

The game also includes a level editor, which is fairly powerful.   The interface isn’t all that user-friendly, but after a few minutes of fiddling around I was able to start making some rudimentary puzzles of my own.

Overall, the puzzles in this game are great, but the loose, floating controls really hamper what would have been a great puzzle-plaformer. I’d only recommend this game for people who really—and I mean really—enjoy challenges.