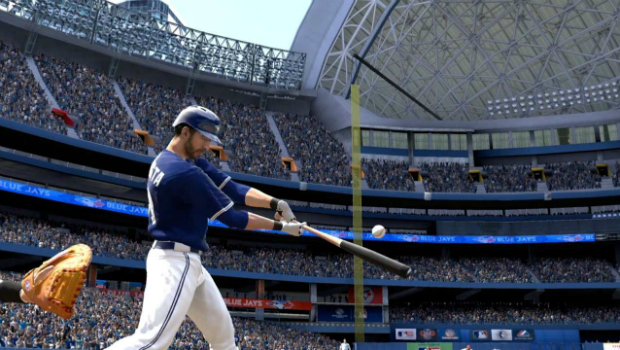 After all these years, it really goes without saying that MLB: The Show is one of the elite sports video game franchises. There will be no burying the lead in this review: The Show 14 is a great and complete game. There is no use in solely mimicking praise, well-deserved as it may be.  A number of persistent design flaws and glitches remain in this final primarily PS3 release.  So before you flee the stands like confused Astros fans in search of a copy, hear me out on the drawbacks the next generation must see fixed for The Show to see continued leadership in the baseball gaming market.

There have been no major changes to the gameplay of MLB 14: The Show from last year’s version, aside from various added animations and a new quick counts mode that plays each at bat late in the count.  All three phases of the game remain the same, gameplay wise. Pitching can still be performed with multiple options, being pulse, meter, and analog, each with their own set of obstacles.  The pulse mode uses a one button accuracy setup to determine a pitch, while meter and analog uses a familiar two-stop meter and the analog stick respectively along with a pitcher’s unique stride to set accuracy and power.

Hitting and fielding both come with little change, still allowing you a button press or analog stick option for control. There is very little to complain about with the gameplay, but the lack of any substantial tweaking is a disappointment.  A long existing, horrible glitch that freezes the baseball mid-pitch remains unfixed, and it happens at inopportune times. With it happening over years of The Show releases, it is unnerving that it persists as it can alter the outcome of games.

In step with the emerging theme, the options for play remain the same as last year’s The Show, with a large stable of various ways to manage and play baseball. Franchises can be played locally, online, and as a simplified season mode. The Road to the Show is the standard build’em up RPG style mode, and the Diamond Dynasty is The Show’s version of online card-based pay-to-play.  There isn’t anything new to speak of here, another disappointment.

Road to the Show represents MLB: The Show’s most bittersweet feature.  The intimate one-player mode in The Show 14 continues to be very fun and without any impeding flaws.  The problems are in design and execution. From the very beginning, player design suffers from a lack of options. The few options  present are similar and boring.  As the character is created, there is no way to alter his overall rating.  While it is a fun challenge, it is kind of lackluster to always start as a bottom level player.  To compound the issue, development is a slow crawl, with experience earned almost entirely in innings played. While position players can benefit from frequent play, designated hitters or bullpen pitchers rarely accumulate experience and as a result never improve. A player can win the Cy Young award as a rookie and still be a 60+ overall at the end of it.  Rather than making players earn experience and spend it on improving stats, The Show could allow them to earn it through play more creatively.  Skill stats like hitting power, pitch control, or fielding could be rated on a performance-based sliding scale, while physical stats could be raised (and maintained) through physical drills either played or simulated. Players would be rated closer to their level of play and it would streamline the playing experience.

The Show 14 gets it all correct in the ambience department, however. All of the main menus have been upgraded and look modern and sleek.  Everything is well organized and easy to navigate.  The sounds of the crowd and the game are top-notch, and the precision and likeability of the commentating crew is on par with even live action crews.  To top it off, the soundtrack is impeccable, with many varied and top-notch tracks complimenting the game action and breaking the monotony of menu browsing and team building.

While the Vita may not be expected to have all the bells and whistles of the PS3, the Vita has proven to be a capable system. However, the number of omissions from the Vita is disappointing. The biggest oversight is the lack of any kind of online play. While I don’t expect to be connected online every time I turn on my Vita, not being able to play a franchise with any friends or play through the Community Challenges seems like an oversight that could be synced while the Vita is online. At least you can still play the Road to the Show mode and play the Franchise mode offline.

The Vita has a beautiful screen, but most of the time the fact that it is a touch screen seems to be lost on developers. Batting and pitching could implement some kind of system using the touch screen. Instead, the analog sticks are used. While they are more functional than the original PSP single nub, they are still short and don’t have the leeway that the DualShock 3 controller does. Since little movements can mean a wide difference of position, movements are even more exaggerated with the Vita.

Graphically the Vita doesn’t look as impressive as the PS3. When you are zoomed out from the action the models get more jagged. The fans in the stands don’t have any depth to them at all, making you feel like you are on a movie set for a baseball game instead of an actual baseball game. The framerate isn’t consistent either, causing frame drops at inopportune times when the action takes place in the outfield.

These problems don’t take away from the excellent gameplay and spot-on commentary. However, you may have to play the Vita version with lowered expectations.

A whole slew of updates have been added to The Show 14, but they are mostly small tinkerings with the way the players develop and react in game.  A new stubs feature allows players to earn tokens for use in different areas throughout the different saved careers and franchises.  Many changes have come to Online Franchise, with emphasis on the use of TheShowNation.com to facilitate trades, team management, and even game simulation.  All of these changes are nice and deepen the experience, but not by much.  The one substantial change that is made this year allows saved franchises and RTTS files to be picked up and continued on future versions of MLB: The Show, which is a very smart new function that lessens the blow of needing to purchase a new game every year.  However, with the PS4 taking hold and PS3 shrinking into the past, the function is a little to late to be of impact for PS3 only players.

A giant in the sports gaming world, MLB 14: The Show continues it's namesake's quality tradition as it transitions from the old to the new, but doesn’t offer anything new and fixes little. On this final primary PS3 release, The Show displays why it is considered great, but also that it still bears the flaws of this generation of sports gaming that will now go unfixed. With a Road to the Show mode that never lived to potential and continual game-interrupting glitches, this final The Show sets up a perfect kill your idols moment. With that said, The Show 14 is still a solid game worth playing.