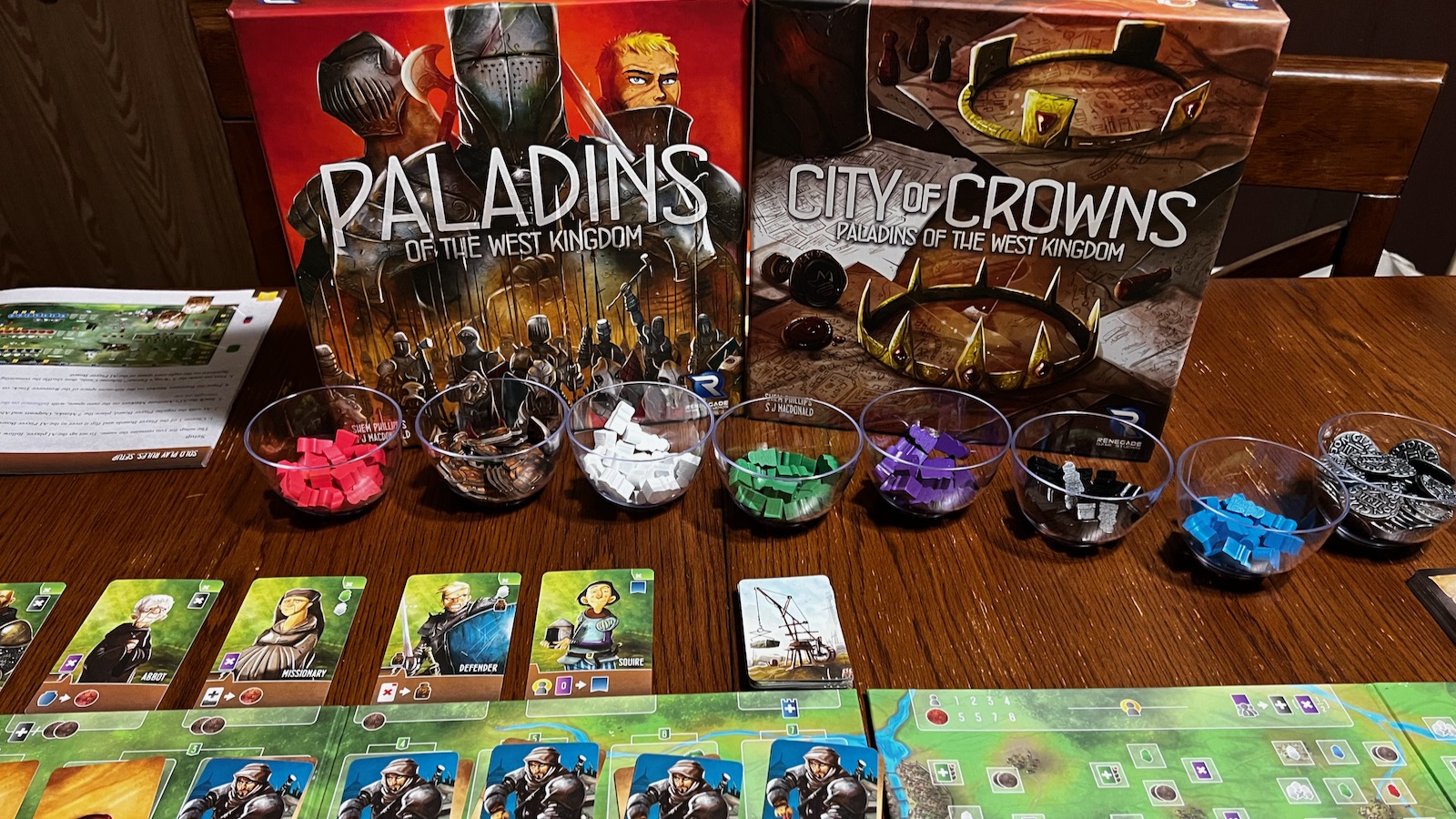 City of Crowns is the first expansion for Paladins of the West Kingdom, the second entry in the West Kingdom trilogy from Garphill Games designers Shem Phillips and S.J. MacDonald. In Crowns, the fringes of the kingdom are being attacked and noble allies have responded. Only through diplomacy and negotiation can you rally allies to your side and defend the kingdom.

In order to fully understand the addition of Crowns, let’s do a quick review of Paladins of the West Kingdom. Paladins is played over a series of rounds with the goal of gaining the most points by the end of the game. Each round players recruit a paladin that grants them certain workers and abilities to help them take actions on their player board. Each of the actions take different combinations of colored workers to carry out and can only be executed when players have the right combination of resources, money, and influence in different categories. Players can also be caught up in corrupt acts, recruit village help, build garrisons and fortifications, and attack or convert outsiders that are threatening the kingdom. Players who can successfully navigate the bevy of choices, will come out as the ultimate protector of the West Kingdom. 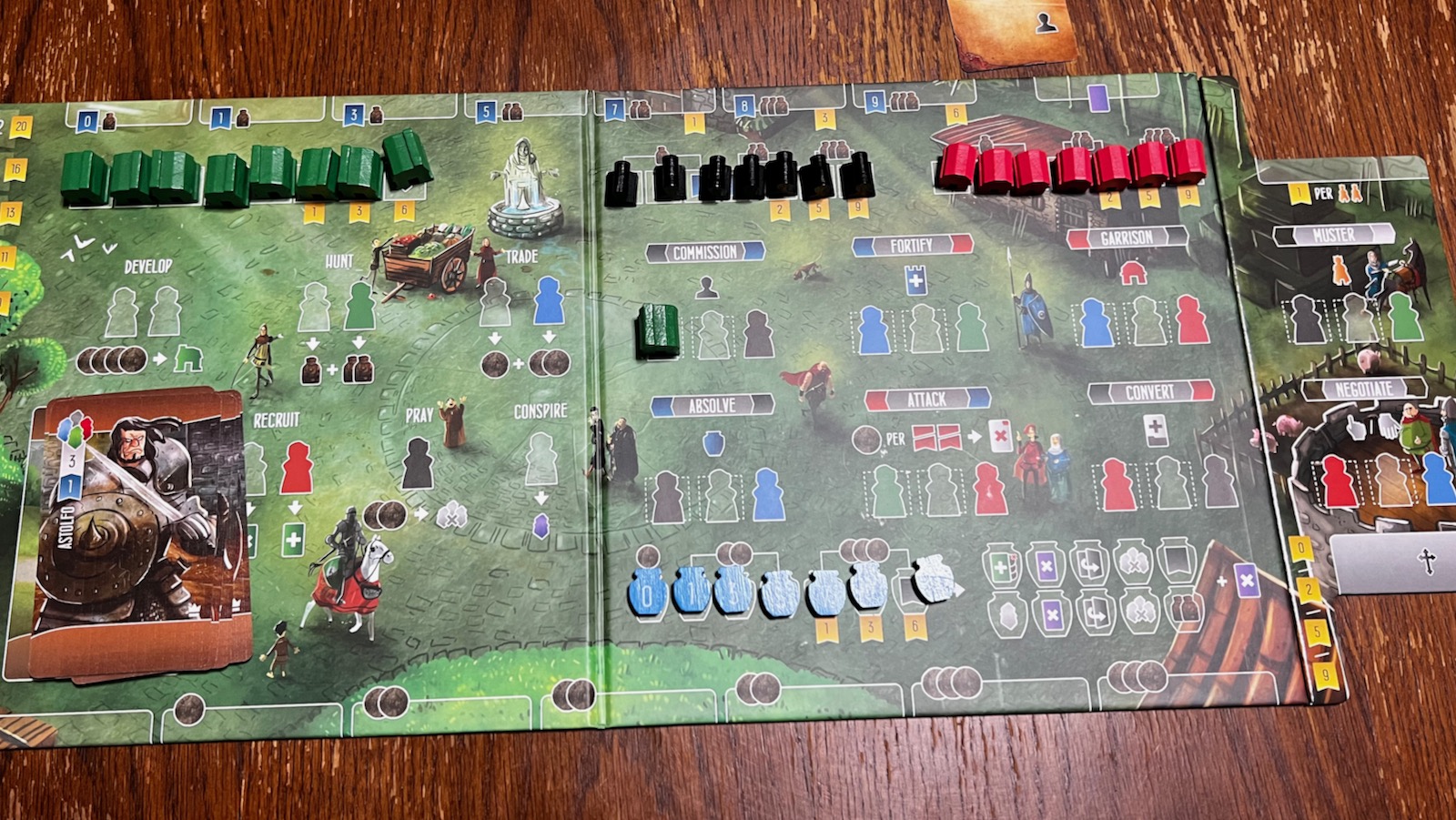 Crowns adds a variety of new elements to an already crunchy base game. Each end of the common main board gets an extension allowing for the new content, additional slots for Outsider and Townsfolk cards, and some new areas to garrison and commission tokens to be placed. These extensions also make the main board almost six feet end to end. The other addition is made to the player boards where each player gets a random extension on the right side. This player board extension adds the “Muster” and “Negotiate” actions. 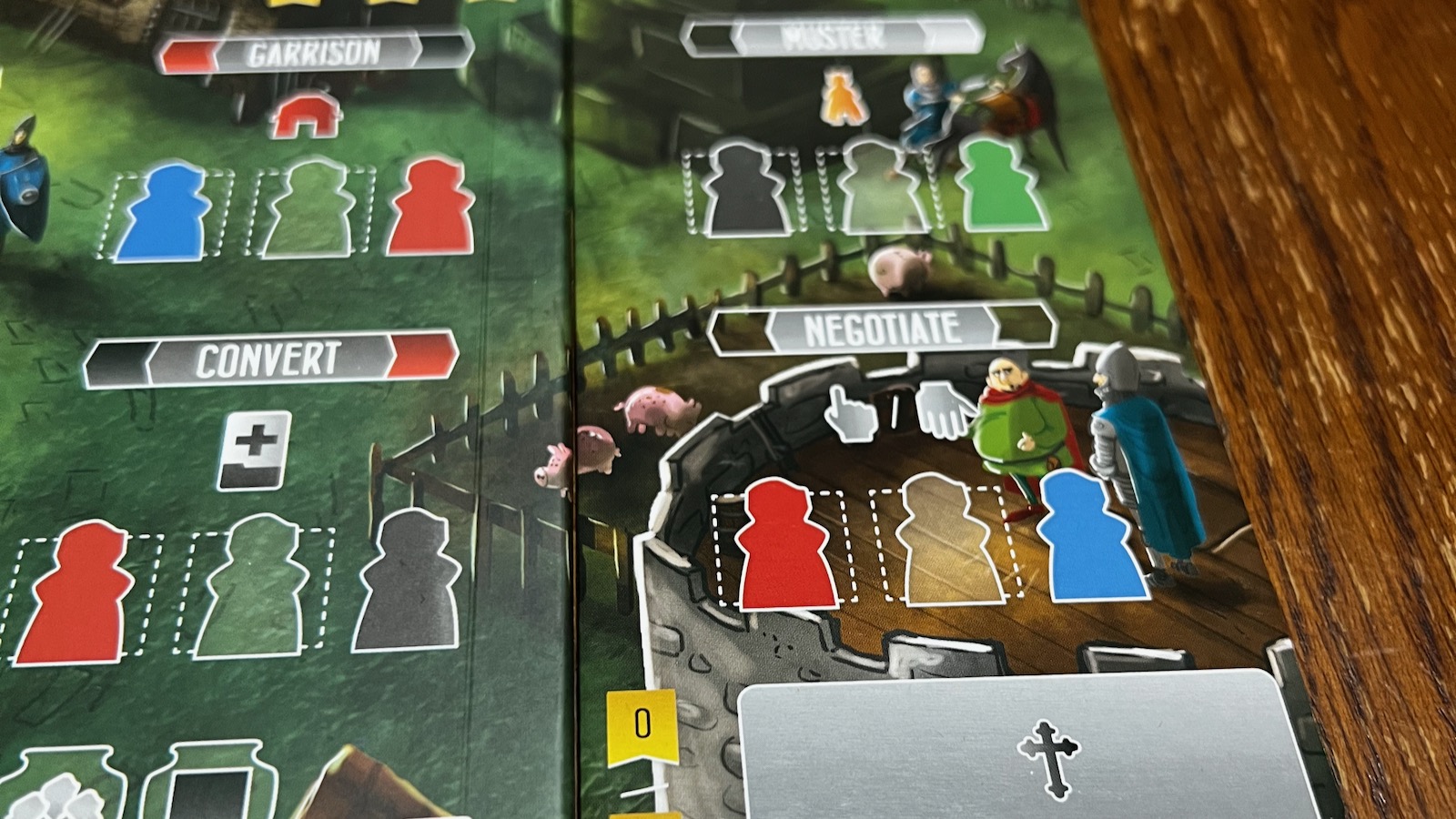 Muster cards offer two options for players to use. The first and most commonly used feature in our playthroughs was the open spot for workers similar to the King’s Favour cards. Players can place the required worker to gain some valuable bonuses. The workers placed on these cards stay until the second Muster option is utilized. When using the Muster action on the player board, the player moves a diplomat to the card they would like to receive. That player gains the bonus, a step up on the new “Diplomacy” influence track, and the worker meeples left by players from before. These muster cards can also be used for victory points at the end of the game. 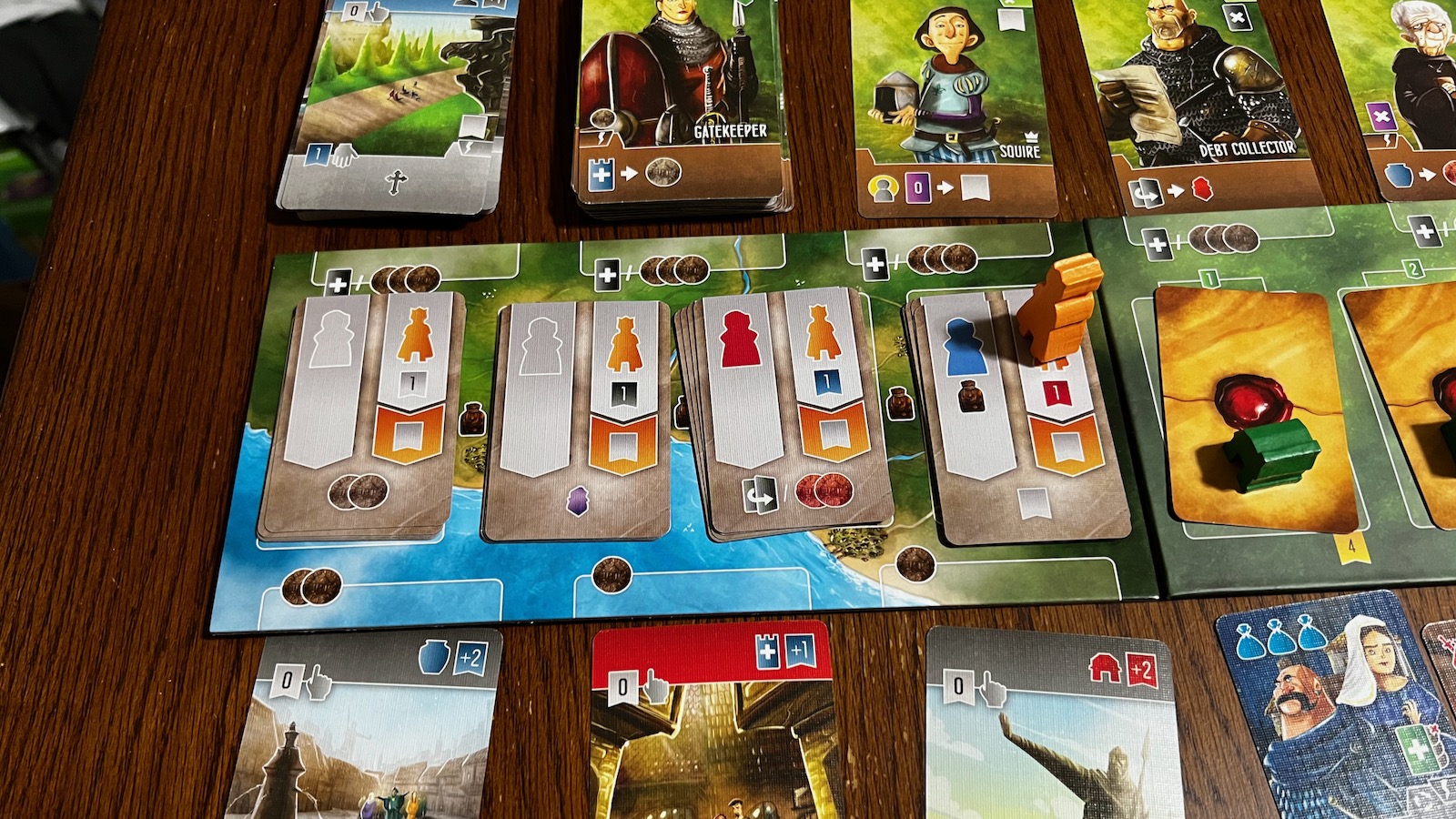 The second new action is “Negotiate” space which allows players to interact with the negotiation cards in one of two ways. The first uses the “Diplomacy” track to try and “entrust” a noble to help your cause. This allows you to take another main action on the board with a boost to the required influence and a discount on all associated costs. The “enlist” action takes into play the other influence tracks and allows you to keep the negotiation card and the symbol printed at the bottom to create sets. These sets can give you bonus victory points at the end of the game and recruit one of four new allies that give you between round bonuses. 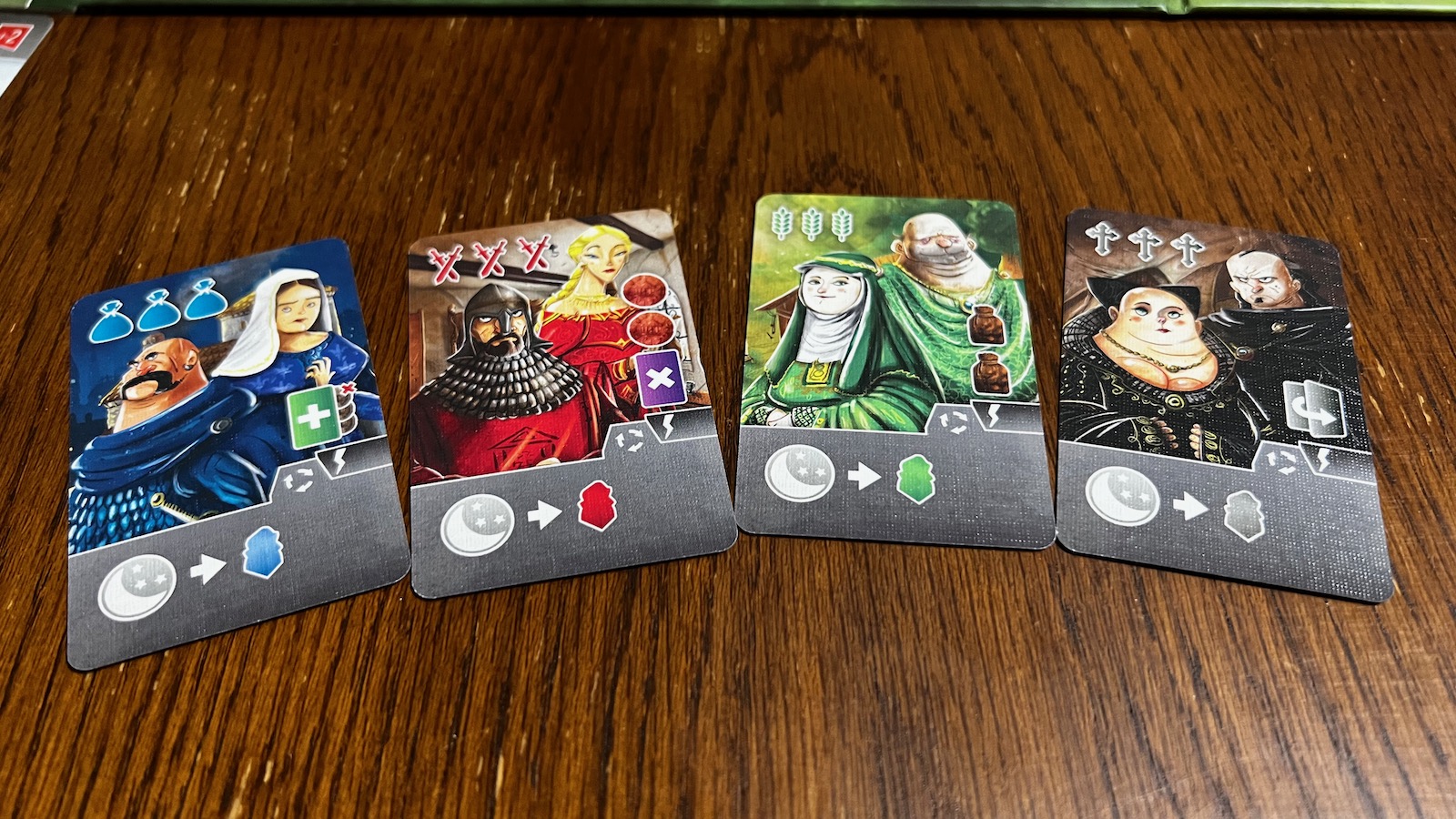 Overall gameplay works in much the same way as the base game. In the set-up phase, players are able to place an included extra green workshop on the board and are given one of the unused King’s Favour cards as a personal secret goal to accomplish throughout the game. Players now draw four paladin cards at the beginning of each round, up from three in the base game, choosing one to play, one to place on the bottom of the deck, one to place on the top for next round, and one to eliminate from the game altogether. The Crowns expansion also adds in new Townsfolk, Outsider, Paladin, King’s Order, and King’s Favour cards along with a few cards to enhance the Tomesaga cooperative campaign for those working through the trilogy. 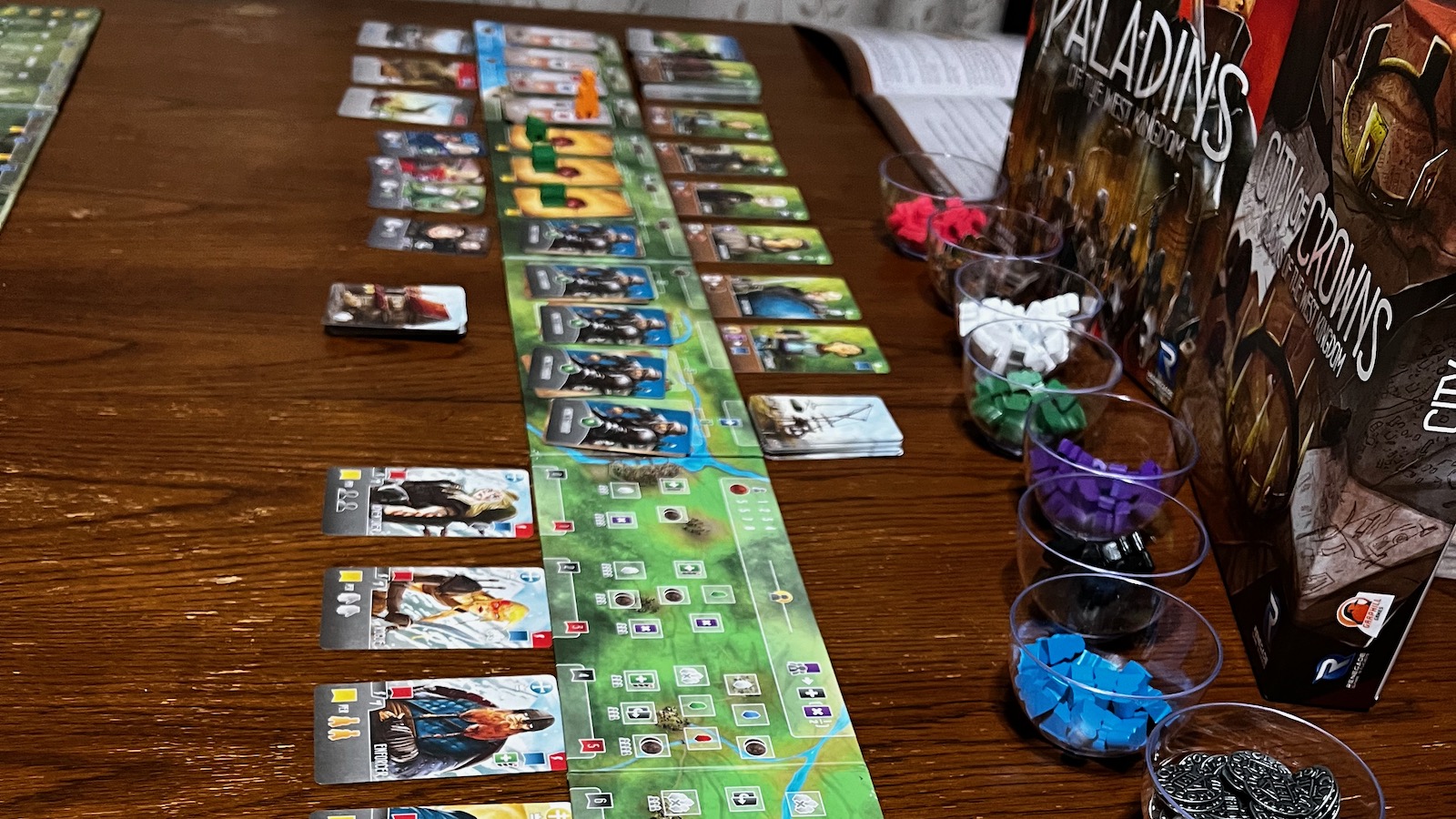 One of the best things about the West Kingdom trilogy is the inclusion of a robust solo mode with a variable AI opponent. Sometimes, it feels like the AI is smarter than you- and it is just a deck of cards. Crowns adds new cards to the solo deck and a new overlay to the AI player board to accommodate the new cards. The variable difficulty of the AI changes the number of workshops placed at the start of the game and resource track now moves two spaces every time the AI would gain money or resources instead of the one from the base game. 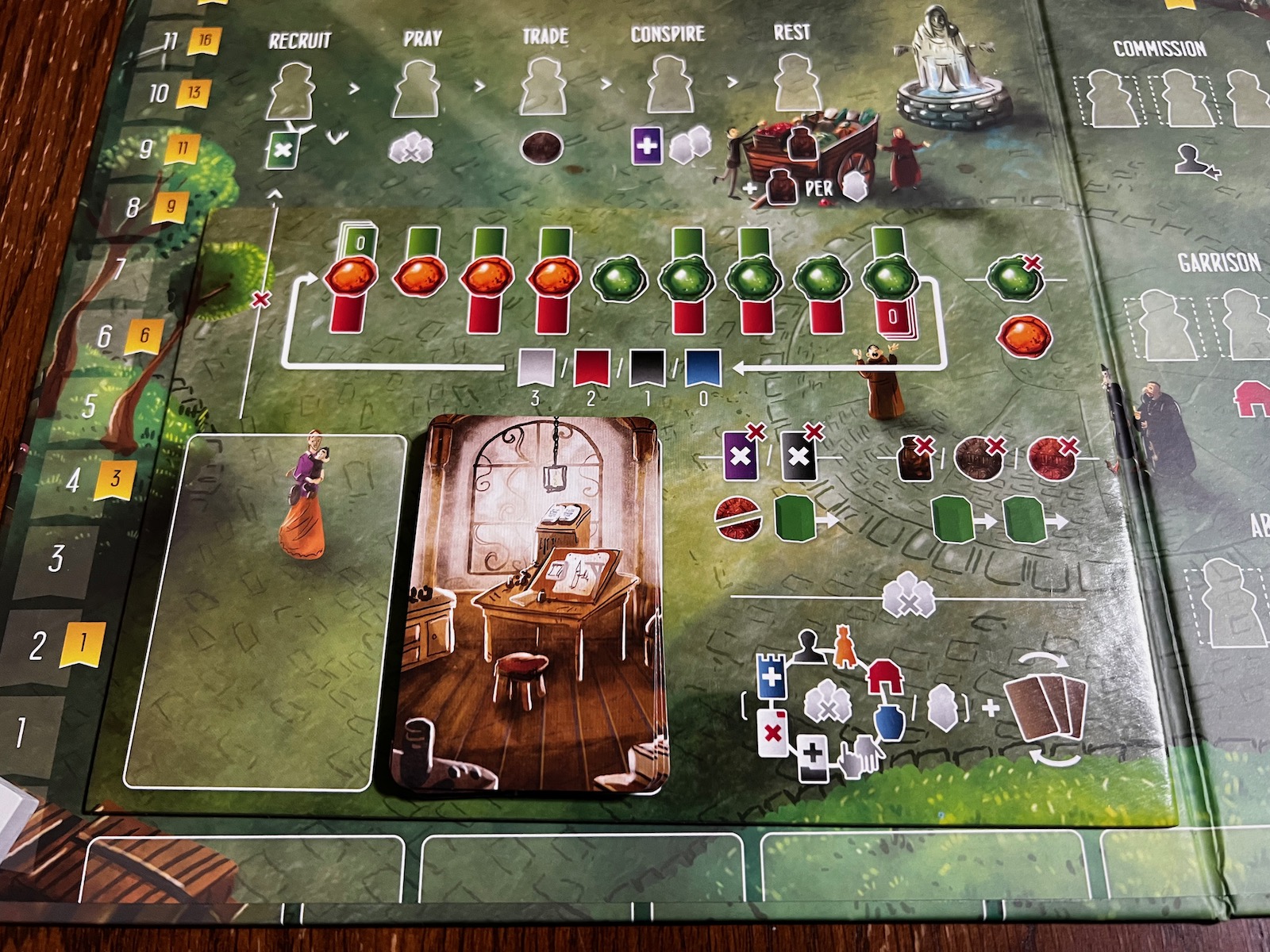 Paladins of the West Kingdom was already my favorite game in the trilogy, but I can’t imagine playing without City of Crowns ever again. The addition of the muster cards allowed for some one-time action spots to gain resources at vital times when I needed a coin or a resource and didn’t want to take the big worker hog spaces on the main board. I also enjoyed moving the diplomat to gain some extra bonuses and workers. The entrust and enlist actions added a fun new element to the game.; entrust came in handy when I was lagging on one of the influence tracks and was able to build that next level of fortification or that recruit the more powerful outsider. The set collection element was fun and actually boosted me over my opponent for the win in one playthrough. In a game where every worker counts, the addition of the ally card giving me an extra worker between rounds felt like a godsend.

Paladins of the West Kingdom: City of Crowns

City of Crowns is a must have expansion to Paladins of the West Kingdom and only enhances an already amazing gameplay experience.