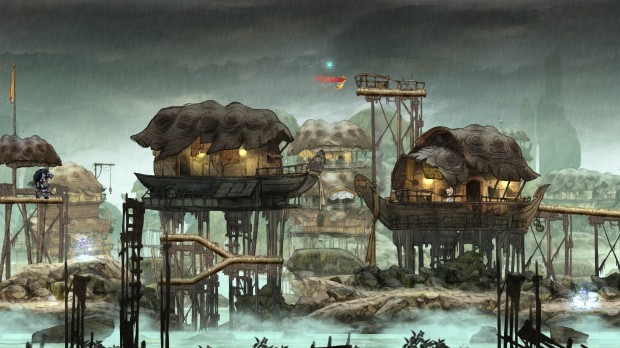 It only took a few minutes of playing Child of Light for me to realize that Ubisoft Montreal had created something great. Utilizing the UbiArt Framework engine, the engine used in recent Rayman games, Child of Light combines all the best elements of modern game design and old-school aesthetics to create a truly one-of-a-kind experience. Child of Light is a platformer/turn-based RPG that was inspired by fairy tales, and although it borrows much and feels familiar, it also creates a unique experience that had me hooked almost instantly.

The story focuses on Aurora, a girl who falls ill and finds herself thrown into the fantastic and strange kingdom of Lemuria. In order to return to her world, she must embark on an adventure to find the Sun, the Moon, and the Stars that were stolen by the mysterious Black Queen. On the surface the story is quite simple, but it has a deeper meaning and a few surprises in store for players that I won’t spoil here. Throughout Aurora’s journey she travels to foreign lands and forges alliances with strange individuals that accompany her on her adventure. The sights to be seen and characters to be met comprise some of the best moments in the game, and I often found myself wandering around and taking it all in.

Child of Light is a platformer primarily, featuring puzzles, collectibles, and enemies in a two-dimensional world. Once combat is initiated however, it changes into a turn-based RPG that utilizes an Active Time Battle system that players might recognize most from the Final Fantasy series. The combat is addictive, challenging, and combines the best of the turn-based formula with a more involved combat system that requires time-sensitive responses.

The RPG elements of Child of Light are as sophisticated as a nerd like myself might have hoped for. Selecting between skill trees, leveling stats, and creating and equipping new oculi (powerful stones that can be equipped to party members) are all a mandatory part of improving your party’s ability to defeat challenging enemies and advance in the game.

Child of Light has a lot in common with the fairy tales that it borrows from. The art style reminds me of paintings in old fairy tale books, and characters speak exclusively in rhyme. The atmosphere is a little bizarre and sometimes even creepy, but it also serves to draw the player into the world. The game also sounds great with an impressive score present throughout the game and some cool sound effects, particularly during battle.

One of the most surprising parts of Child of Light is its multiplayer functionality, which allows a second player to control of Igniculus, Aurora’s floating blue firefly sidekick. Igniculusis normally controlled by the player, but having a friend do it is a lot easier, and is a real game-changer for a genre that has very few multiplayer titles in its ranks. During battle Igniculus can slow opponents, heal allies, and collect items that aid the party. Being the second player is surprisingly entertaining, and doesn’t feel disappointing like some sidekick roles that have existed in the past.

One of the disappointing things about Child of Light is the lack of variety in terms of enemies— there are less than in most RPGs, and many of them feel like repeats of past enemies (e.g. spider, fire spider, ice spider, even bigger spider, etc.) There are so many different areas and characters to meet, but when it comes to enemies to fight, there seem to be significantly fewer, which is a bit of a bummer.

The version of the game that I played also had some glitches. The game crashed once for a reason I could not identify, and there were some noticeable visual hiccups, but a day-one patch is supposed to clean most of these up, so hopefully this won’t be an issue once it launches.

Child of Light is a bright spot in a genre overwhelmed by mediocrity. Beautifully retro, yet modern, and incredibly addicting--Ubisoft Montreal has created a rich world and style that is unlike anything I’ve played before.