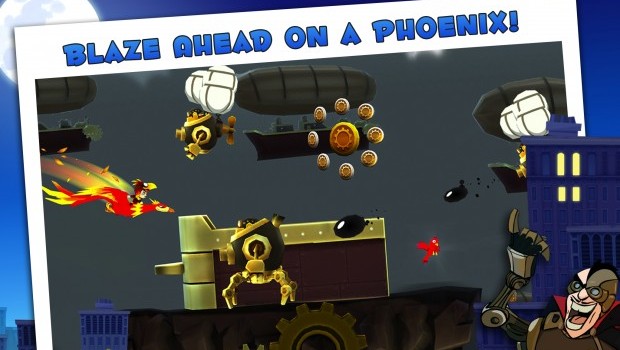 Shortly after I purchased my iPhone, I downloaded a little game called Jetpack Joyride. It occupied my spare time when I only had a couple of minutes, but with the goals to complete and the items and costumes to purchase, I found myself spending more time with it than I care to admit. Besides, the premise was so simple. Just press on the screen to go up and release to go down while avoiding deadly obstacles. Now AdvenChewers has been released, with similar gameplay to Jetpack Joyride, but with enough differences to make differentiate it.

The story behind AdvenChewers is about a young boy whose inventor father is kidnapped by some robots who snatch him up into some zeppelin-like aircraft. Able to reach out of a window of the airship, the inventor gives a phoenix a special piece of gum. The young boy takes the gum and blows a bubble, finding himself lifted up in the air.

AdvenChewers is another side-scrolling game, where you move up and down throughout the level avoiding enemies and collecting coins. Touching with the screen makes you jump, but another makes you blow up a bubble that will lift you up in the air. Holding down makes you soar up in the air higher and faster, but you can’t do that for too long or else your bubble will break and send you tumbling down.

You’ll encounter two different forms of enemies during your journeys. One is goo, which you can’t touch at all. Some goo stays in one place, while other goo moves and even explodes to try to get you. The other enemies are robots that run towards you. These can be destroyed by jumping on them.

You do have some allies to assist you. Every level has three birds that you can save. If you are able to touch one in the level, it will follow you around. If you end up getting hit by an enemy, your feathered friend can save you from your impending doom. Each bird that arrives at the end of the level with you earns you extra points, so you can get plenty of replayability if you want to challenge yourself to get every bird rescued.

The other ally is the phoenix. If you can catch a ride on him, then you are invincible for a short time. This allows you to go through goo and bots without any issue. The ride is short-lived, but it’s great while it lasts.

Having a single super bubble gum might be enough, but you can get multiple types of gum to help you. Some destroy goo on contact, while others blow up the bots. Another type attracts coins, while another make you invincible for a short time. Some can be found on the levels, but you can purchase them as well.

Throughout the level you gain coins by moving over them. You can also get bonus coins by completing goals assigned to you. These can be used for purchasing equipment or gum to help you survive the levels. The gum ranges in the couple of hundred, but the equipment can range in the thousands. If you are patient enough, then you can get the coins from playing the game. However, those who want instant gratification can use real cash to increase their coin bank. A separate area shows the number of coins and the price for each amount. Prices range from $2 to $50, so make sure your kids don’t know the password to your Apple ID.

While all of the action takes place on a 2D plane, the graphics all have depth to them. This adds to the cartoonish style of the game. The backgrounds are flat, giving enough contrast to determine which items are in the foreground, but there are times when that is tricky to see due to the action.

The gameplay is similar to other side-scrollers where you need to avoid the enemies as you automatically follow through the levels. The toughest part of the game is knowing when to make contact with the screen. Jumping is much different than floating, and you need to really tap the screen to float up and down gently. If you hold down you soar quickly, and you can gain altitude quickly but also easily burst your bubble. I never felt that the controls were as precise as they could be, so that made the levels more frustrating.

There are plenty of levels to conquer. Five different areas make up the levels, with each area giving the levels a different theme. While the levels aren’t very long, it will take you a while to get through all of them, and even longer to complete all the goals and rescue all the birds.

All in all, AdvenChewers isn’t a bad distraction, and for a buck there are much worse options out there. The outdoor environment gives you more freedom, as you can go up high and avoid much of the level if you like. Still, it is hard to avoid the similarities to Jetpack Joyride. If you can get past the differences between the two, then you’ll be in for a good time.

All in all, AdvenChewers isn’t a bad distraction, and for a buck there are much worse options out there. The outdoor environment gives you more freedom, as you can go up high and avoid much of the level if you like. Still, it is hard to avoid the similarities to Jetpack Joyride. If you can get past the differences between the two, then you’ll be in for a good time.