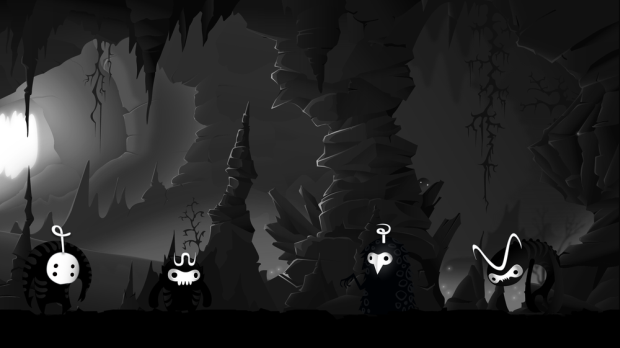 The pick up and play iOS genre has become something that many developers strive for here recently, thanks in large part to the success of games like Temple Run and Fruit Ninja. These games base themselves around the concept of having one run through whatever gameplay elements surround them, in hopes of achieving a higher score than before. It is a nice harken back to older days of gaming, when we would be standing in front of cabinets instead of behind desks. But that being said, it still takes a bit of pixie magic to be able to capture attention for a short period of time and then provide enough of a thrill to bring people back. Rovio Mobile and Halfbrick Studios have managed this before with Angry Birds and the aforementioned Fruit Ninja, but can Mildmania Oyun Bilisim capture this same magic with their new “Darklings” release?

Darklings is set on a 2D environmental plane and features a standard blob which waits oh so patiently for enemies to come toward it. These enemies can be extinguished by using Darkling’s core feature, drawing. As the enemy creeps slowly onto screen and into your viewpoint, you see patterns on them that you must draw. These patterns can range from simple U shapes to more elaborate designs that require you to pay close attention to your finger movement. Once these little formations are drawn, your nameless main character teleports onto the enemy and gobbles him up before preparing to attack the next oncoming creature. Once the gobbling is complete, your character burps up some stars that help you purchase upgrades.

The complexity of the patterns required to be drawn can both be a major positive but also a frustration. The variety added because of these complex designs is a nice addition, but drawing them and having the iPhone/game recognize them correctly can be a small nuisance. The solution here is to find a perfect balance between complex and simplistic shapes, something that Darklings does fairly well. There will be some instances where an entire wave will require you to swipe your finger all over the screen (before dying in frustration), but those are a bit rare. One requirement though is a clean screen and clean fingers. If you try to attack your screen with some good old greasy burrito fingers, you will not get the results you desire.

Darkling’s art style is something that will jump out to many when taking a gander at the iOS product. It has a very distinct, and very dark, vibe that is established with every flourished piece of art. The only disappointment is the lack of a wide variety of visuals to stare at, but that is somewhat alleviated by the available visuals being so damn good. I have never been a fan of the “emo” and dark look, but Darklings pulls it off very well. The music also helps as it sets up a dreary vibe to compliment the gloriously dark visuals.

Without a shadow of the doubt, the biggest problem plaguing this artsy action product is the required time limit during each playthrough. The enemies themselves come in waves, which means that you can be attacked suddenly with multiple foes, something that is difficult enough in and of itself. This difficulty is immensely satisfying though, as you strategically pounce on individual foe after foe, ultimately extinguishing all the baddies in the area. But this time limit can dampen the experience by stopping you before your momentum can be propelled forward. It consistently seems like you are given just a tad too little of time. Of course, you can increase your time by snagging all the floating stars but achieving that is a hassle in and of itself.

This “tad too little of time” is a clear ploy to make you visit their expansive upgrade market, which features items that increase power ups, stars earned per kill, and you guessed it, time allotted in a game. Unfortunately, these upgrades, with the exception of obtaining more power ups, are all way too expensive to afford unless you put a ton of hours into Darklings, something the simplistic game design does not lend itself well towards. So begins the invasion of “hey, why don’t you pay some micro-transactions and get more stars?” These micro-transactions being based around paying real money inside a game you already paid money to play. To be fair, Darklings never pushes that option on you, but it’s clearly the only method if you want to purchase multiple, or even one large, upgrade.

Apart from the fact that obtaining stars is a hassle due to enemies approaching, it is also frustrating due to some splendid iOS design. Once you eat the enemies, the stars float upwards, and eventually off screen. So as the stars are floating towards the heavens, they will reach the top of the screen, and as you can guess if you have an iPhone, swiping down from the top of the screen results in you launching your notification center. Because of this, I gave up on getting all stars and had to only get the ones that were right near me, which meant that when things got hectic, stars were the least of my worries.

Mildmania Oyun Bilisim has not created the perfect time-killer product, but it has created an adequate one. Unfortunately, the iOS market is a hard one to break out in so adequate may not be enough in the grand scheme of things. However, Darklings does feature a wonderfully unique idea and some gorgeous visuals. But as are many games these days, it is held back by a slightly disguised push at micro-transactions which ultimately dampens the whole experience. Either way, $0.99 is a small price to pay for some gorgeous visuals and unique design.

Darklings features a very unique concept in the idea of drawing shapes portrayed on the incoming enemies, and this idea is implemented well. But the overall experience is brought down by some other gameplay frustrations that can only be avoided by buying extra stars through micro-transactions. It also features some very dreary but enjoyable music and delightfully drab visuals. At the end of the day, Darklings is a mildly disappointing, but also intriguing, beauty.