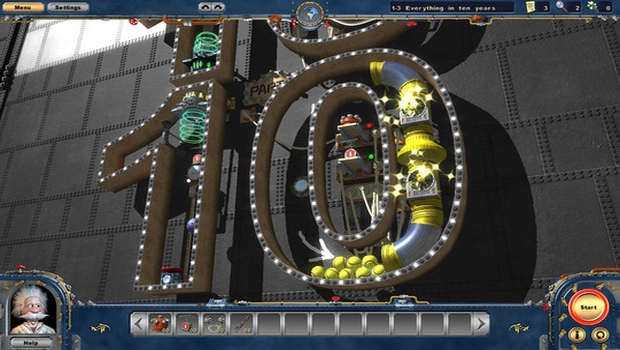 Booting up Crazy Machines 2, the initial setup had me install a pre-2010 version of DirectX in order to run the game. That initial moment of virtual time travel was a sign of things to come, as the Anniversary DLC pack for Crazy Machines 2 is in every way faithful to the Rube Goldberg style of invention-gaming of my elementary school days.

Crazy Machines 2 is a game about experiments. You’re given a situation and told to make something happen, but everything in between is up to your imagination. Employing a host of physics-based solutions and some everyday household objects, there’s a huge amount of levels to tear through and situations to overcome.

With the 10th Anniversary, developer Fakt Software adds many new features and 11 new levels for inventors looking to spice up their experiments. Acceleration plates defy gravity, high strikers and confetti cannons that respond to radio signals, and a bust of the professor himself. It’s a nice homage to longtime fans of the game, filled with celebration and self-referential humor.

Each pack has its own theme and aesthetic to complement the experiments.

The runtime of the levels is pretty short, and it only took me an hour or so to brute force my way through them. Still, the solutions were always fun to suss out and there was really inventive use of the new tools in the toolbox.

For the people who have been following Crazy Machines 2 since it first hit Steam, this is a no-brainer DLC. The new features it adds are fantastic fun, and the main levels all do a good job of introducing new ideas without bogging you down.

For newcomers, though, Crazy Machines 2 offers an even greater wealth of gameplay. With tools like acceleration plates added, there’s tons of new ways to mess with your lab and create new challenges. One of the most engaging features of Crazy Machines 2 isn’t just playing through the developer levels, but creating your experiments and sharing them with the online community.

Figuring out how each part works in unison is key to solving each experiment.

There’s tons of tools available to create giant experiments, even full DLC-sized packs, and share them online with others to beat. There’s a potentially massive amount of replayability for inventors out there, contained in one cohesive, comprehensive package.

The physics and graphics are also fantastic. Objects have a weight to them, and are easy to manipulate, rotate and move around to best position everything for when you hit “start.” Zooming in on the objects also lets you see the work that has gone into keeping the graphics modern, and many of the new objects in the 10th Anniversary pack look fantastic on the highest graphics settings.

The controls can be a bit finicky at times though, especially the mouse controls, and sometimes I found myself fighting them to get the pieces just where I wanted them. That level of detail is great when I need everything to click together just right, but it also means occasionally getting frustrated when trying to intersect connections that were close together.

The explosions and particle effects are pretty fantastic.

Also, you need to be an inventor at heart to enjoy this game. It can get a bit dense at times, and while the end result is always a thrill to watch, the set-up can be tedious for those not engineer-minded. There’s also no drive to keep going beyond getting better scores on each level, so if you’re someone who needs a narrative to drive you forward, you’ll likely not find that compulsion here.

That being said, if you were always the one to put together the Mouse Trap board at your friend’s birthday parties, this is definitely the game for you. There’s tons of new tools added in the 10th Anniversary DLC, and tons of player-made packs and creator tools to mess with. Crazy Machines 2 speaks to the crazy inventor inside all of us, patiently setting up the dominoes to watch them all fall in spectacular fashion.

The Anniversary DLC for Crazy Machines 2 adds a lot of content for the CM2 faithful, and bolsters an already great offering of inventive engineering fun. It isn't for all gamers, but if you dream of Rube Goldberg machines, you can't pass on this plethora of great content.