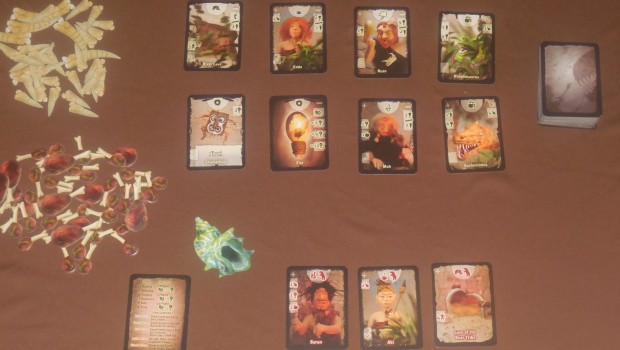 When it comes to inventing things, some games set a pretty high bar. Civilization, Through the Ages, and Innovation are a veritable parade of inventions. I’m not that smart. What I need is something more on the level of inventing fire. Yeah, sometimes I’m only as smart as the brightest caveman. Luckily there is a game with such low expectations: Cavemen: The Quest for Fire. Keep reading to see if this game burns bright or sputters out.

The components are actually a high point. The artwork is distinctive and seems to be photos of clay figurines. The food and tooth tokens are sturdy cardboard and do much to add to the atmosphere of being cavemen.

The rulebook was good and covered some of the unique aspects of the game quite well. The rule summary cards are quite handy, too.

How to Invent Fire
The goal of the game, for those of you who didn’t read the subtitle on the box, is to invent fire. Inventing fire requires having smart cavemen in your tribe, but also having won the bid to be the Conch-holder, a glorified first player. How will you get these smart cavemen? How will you win the Conch? Is this Lord of the Flies?!?!

Cavemen is a game about drafting cards from a central pool. Most of the cards are cavemen, and cavemen have a variety of skills such as hunting, inventing, foraging and exploration. Getting them to join your tribe requires spending food or teeth. Yes, dinosaur teeth are much valued among cavemen. In fact the main source of food and teeth is hunting beasts, which are another type of card in the card pool. You’ll need cavemen who are good at hunting to take down the beasts, and there is a risk that one of your cavemen will be slain and returned to the discard pile. You can’t have very many cavemen unless you find another cave to dwell in, and caves are another kind of card in the card pool. You will need either teeth or an explorer caveman to gain them and more cavemen are important to winning. The fourth kind of card that might be in the card pool is an invention card. These cards require a certain amount of total inventing ability in your tribe. Most are different kinds of bonuses, and there are some neat abilities and interactions among the inventions. Fire is one of the invention cards, and gaining it is how you win.

A round involves bidding teeth for the right to be the Conch-holder. The Conch-holder is the only player to get two actions (everyone else gets only one) and he gets the first action and the last action. After the Conch phase, players must feed their tribe. The Conch-holder must pay one food for each tribe member while the other players pay only one food for their whole tribe. Then during the action phase players draft cards symbolizing recruiting a caveman, exploring a new cave, hunting a beast, inventing an invention, or foraging (which is not a drafting action and means gaining food equal to the sum of the cavemen’s forage scores). Then the round ends. This repeats until the second time the invention of fire card is drawn and someone can claim it by having enough invention skill in their tribe and being the current conch-holder.

This game is fun until it ends. The ending is really anti-climactic. You spend the game trying to get enough cavemen with the inventing skill, while keeping enough food to stay alive and teeth to bid for the conch when “Fire” comes out. The game is an interesting balancing act, and you need to know when to spend teeth for a second action. The problem is that as soon as the “fire” card is drawn the second time the game becomes empty. If two people have enough inventing, they compare number of teeth, I mean pretend to bid. If only one person has enough inventing, then the other players have to bid teeth to prevent that person from being the Conch-holder. After a few rounds no one has teeth except the person with enough inventing.

Why You Might Like Cavemen
I like the bidding for a bonus action, but also the penalty of having to pay more food at the start of the round. This game could have worked if everyone took one action and the first player rotated. Instead the bidding adds a nice layer to the game.

I like the casualty system, which really gives some focus to your choices when recruiting. I did not describe it above, but each caveman card has a number on it, and when hunting you flip over the top card of the deck and look for a match between the number on the revealed card and any of your cavemen. If any of them match, then you lose one caveman of your choice. This means that the best cavemen to recruit have the same number as the other cavemen, so that your odds of a casualty are closest to 1 in 5.

Why You Might Not Like Cavemen
My biggest complaint is the end. You have 45 minutes of engaging decision-making which boils down to do you have the most stuff at the right unpredictable moment. The moment the “fire” card comes out the game losses all interest. The game is determined at that moment. I should give the winner some credit for having everything he needed at the right moment, but I felt let-down by the lack of a climax.

Bidding games in general are hard the first time. You don’t know what something is worth, but the value of an extra action is especially hard to correctly value. What is an extra action really worth? When is it worth more? We got better after the first game, but it still makes it hard to learn and play competitively.

Who Can You Play This With And How Hard Is It To Learn?
You can play this with medium-light gamers. The same people who enjoy Ticket to Ride, Settlers of Catan and Carcassonne will be able to learn and play this game. It’s not hard to learn and the rules summary cards really work to help new players grasp the game.

It's hard to recommend a game that is not fun to win. It's fun to play, there are some great interactions and interesting decisions, but the end game is anti-climactic. I would say try before you buy, but for me, I'm not making room for it on my shelf.