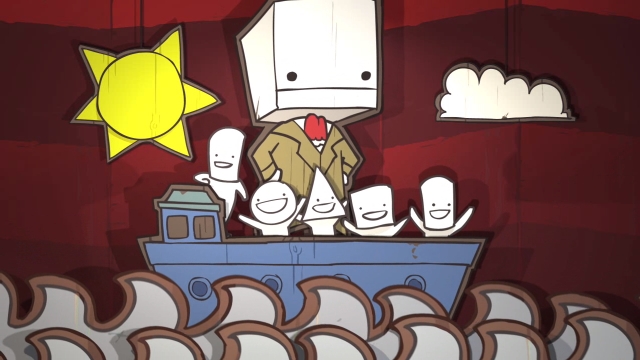 I’m entirely convinced that there is something fundamentally wrong with developer The Behemoth – the elements of the word being “fun” and “da-mental”. I can only guess at where the creative development cycle started with Alien Hominid, a difficult side-scroller (by today’s standards), moved on to the four-player mayhem of Castle Crashers with oodles of things to find and unlock, and followed now by a puzzle game. They’ve jumped genres each time, maintaining their signature art style and goofy presentation, and landed each with all the grace of a thousand pound chicken. But wait, I get ahead of myself.

BattleBlock Theater opens up with an almost improvised cut-out puppet narration of a group of friends who are shipwrecked. They end up being imprisoned in a run-down theater by large cats who make them perform for their entertainment. Yeah. I’ll let that sink in. Cats. Theater. The SS Friend Ship. Their hero, Mr. Hatty, has been crowned with a glowing red top hat by the cats, and now it’s up to you to collect gems  and golden balls of yarn on each performance to save your comrades and unlock the secret of the theater.  The narration makes the introduction even funnier, and it doesn’t stop throughout the game.  While the narrator gives his play-by-play throughout and sometimes insults you, he never gets annoying.

BattleBlock Theater is a puzzle-platformer with levels within the theater composed of blocks.  Each of the blocks has different qualities that can help or hinder you to reach the gems and golden balls of yarn.  Regular blocks can be run across.  Exploding blocks disappear when you get near them, but reappear shortly thereafter.  Air blocks can be jumped through going up, but you can’t jump down through them.  Instead of using springs ala Sonic to jump high or horizontally, hot lava blocks send you smoking.  Water will destroy you, but some boats are scattered at key areas which allow you to cross the deadly liquid.  Pipes allow you to climb up walls, which is necessary to get to specific places in the level.

[singlepic id=11660 w=320 h=240 float=left]The levels have the same general format where you start at one point, traverse the map collecting at least 3 gems to unlock the exit, collect any remaining gems, and exit the level. Dying holds no cost beyond the time it takes to respawn – this is only a hindrance on the final levels of each section where your progress is timed, and exploring is less important than simply completing the challenge. Not only equipped with the ability to jump, climb and hit, your weapons as well as scattered power-ups help you complete each challenge.

As you collect gems, you can buy off the guards to release one prisoner at a time, at the starting cost of 10 gems. As you release more and more of the same kind, the cost goes up. The golden yarn can be traded for weapons that you can use during your performances such as dart guns, vacuums, green balls of goo, and exploding vaudeville frogs.  I swear to you, this was not a sentence I thought I’d ever type.

BattleBlock Theater includes a co-op element as well.  When you play in co-operative mode, the level will require you to work with your partner as some of the single-player assists will be missing, and you’ll need to fling each other around to complete stages. Rather than feeling forced, it is actually quite refreshing – and at no time are you required to talk – you can signal your partner to come help by simply holding the LB button, should you be playing over Live.

[singlepic id=11663 w=320 h=240 float=right]There are hundreds of friends to unlock, and although the weapons only reach into the teens – and swapping them out as you see fit from the pause menu. You can replay levels to your hearts content, trying to get a better rating (though each gem / ball of yarn only gets added to your inventory the first time you collect it). With hidden levels, disappearing walls and countless traps there is more than one way to skin a cat. As you progress the options to pass the level become more and more restrictive, though in story mode I’d not found any that required the use of the special tools, they certainly help.

If I were to gripe, it would be that sometimes the combat in story mode can often find you pointing in the wrong direction when hit, or rarely find yourself being able to land on the extreme side of trap square that should have killed you. I used the gamepad over the joystick almost exclusively as I found the alternative wasn’t precise enough. On the other hand, the graphics were flawless in execution – and the audio is outstanding. From the voice acting to the frantic “Secret” level music, I was in stitches. Networking over Live was also unimpeded and I found no problems with either local or XBL co-operative play, including both story and competitive/combatitive modes. From the standard fare of team deathmatch or king-of-the-hill, BattleBlock Theater also offers many of its own variants that are easy to get into.

Several multiplayer modes are included in the Arena.  One level requires you to color more blocks in a level than your opponent.  Another has you beating up on each other, while their version of King of the Hill requires you to stand on crown blocks for the longest time.  Eight different modes are included, and they can be played competitively or cooperatively.  If you don’t feel like doing something that requires your brain, or you’ve had a few adult beverages late at night, these are fun to play.  These allow up to four players to play locally or online.

[singlepic id=11662 w=320 h=240 float=left]If you don’t like the levels and think you can do better, then The Behemoth has given you a chance to prove it.  A level editor is included, and community levels are supported through the game.  Random, but good, levels can be played, and you don’t have to look far to find them.  Just go to the Arena and hit the Grab Bag.

With room left to expand their game both internally as well as user uploaded content, and with a ranking for each level, challenge mode and two difficulty settings, there is plenty of reason to revisit. There is a reason why Castle Crashers is still enjoying a #7 slot in top XBL titles played nearly five years after release.  While I don’t think BattleBlock Theater will hold gamers’ interest that long, I can say with certainty that I’ll be keeping it around to scratch my puzzle/co-op itch.

BattleBlock Theater is probably the most absurd premise we’ve seen from a western developer in quite some time, and a game you truly need to experience.  Some may be put off by the silliness, but if any of the over-the-top cartoons like Spongebob Squarepants, Ren & Stimpy, or Adventure Time appeal to you, this is a must-have title for the single-player progression alone. At 1200 MS points it’s a small price to pay for the madness, and certainly lives up to its Castle Crashers pedigree for polish, poise, and preposterous premise. 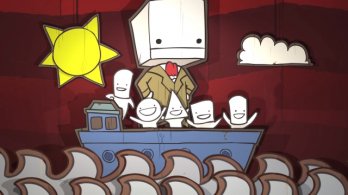 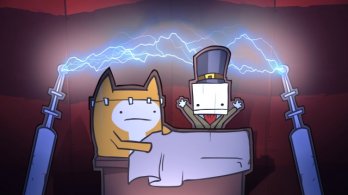 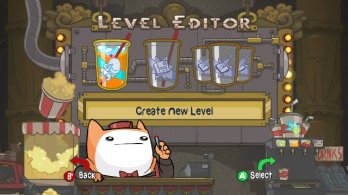 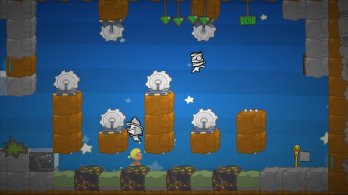 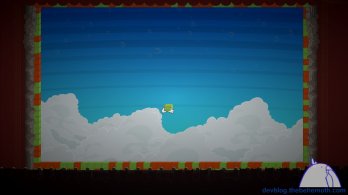 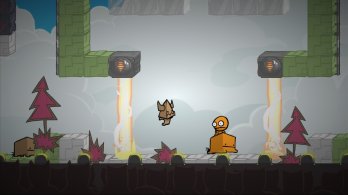 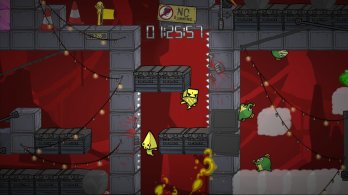 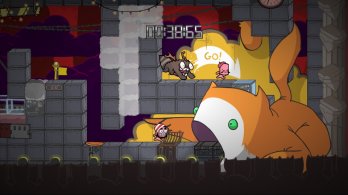 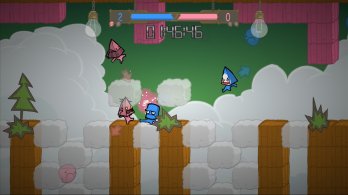 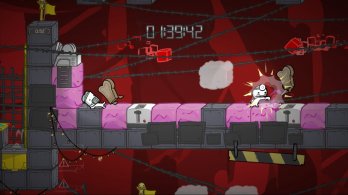