Two weeks ago I reviewed Captain America: Super Soldier for the Wii. I compared the game to a stripped down version of Batman: Arkham Asylum, the game was decent for a movie and comic book based tie in, but it wasn’t great. I also thought the game would be enjoyed more by a pre-teen audience, as it was a bit easy and fairly linear. After beating the game on the Wii I moved right onto the PS3 version, I went in expecting a similar game, but with better graphics and zero motion controls. So I was actually pleasantly surprised when Captain America: Super Solider on the PS3 turned out to be a bit more fleshed out with a higher level of polish than the Wii version.

The story in Captain America: Super Soldier is set in the movie universe, complete with Chris Evan’s likeness and voice acting. However, the game doesn’t follow the events in the movie and is instead a side story dealing with one of the Red Skull’s weapon manufacturing hideouts. The story starts out with the Captain storming a French beach only to discover documents detailing the location of  hidden weapons plant built under a huge castle. Although the Red Skull does make an appearance in the game, he is not the focus of the story. Instead the castle and the various villains within the castle are Cap’s main adversaries. Ultimately the story is nothing to write home about, but it does a decent enough job representing 1940’s Captain America. Interestingly enough the Wii and Ps3 versions don’t tell the exact same story either. Sure they are similar, almost as if the development teams where given the same plot outline, but then they went on their own and fleshed the story out to suit their individual game.

I don’t think the fact that the castle and the various villains are so prominently featured is a coincidence either. Captain America: Super Soldier was obviously modeled after Batman: Arkham Asylum. With the exception of the first level, the entirety of the game is set within the huge Castle of Baron Von Zemo (Much like the Asylum). Even more similar is the Captain’s combat abilities. During almost every fight you will be surrounded by multiple enemies that the Captain handily dispatches. In fact, Cap really doesn’t have a problem solving things with his fists and shield until the game throws long range soldiers, close range soldiers, heavily armored soldiers and robots at you all at once.

The button layout and commands are also fairly consistent with Arkham Asylum and I found the combat to be easy to pick up and play because of it. I complimented the Wii version for using the Wii remote’s pointer to control Cap’s shield, and while the PS3 version doesn’t use the Move, it is still fairly easy to control the shield. By holding down the L2 button you go into a 3rd person mode that features a targeting reticule, time slows down while in this mode and the Captain is easily able to target several bad guys and then fling his shield at them. You can also perform a quick throw of Cap’s shield that will bounce off of several targets like a ping pong ball and then come back to you.

For me the highlight of this game is its combat and the ease at which you can pull it off. There is something inherently cool about controlling Cap while he fights four Nazi wanna-bes at once and then finishes the last one off with a slow motion punch that shatters the goon’s armor. This version also features a critical strike meter that allows Cap to pull off extra devastating attacks and gives you the ability to use the bad guys weapons against them. The combat always seems to have the right balance and never got old for me.

I Can See Dents On Cap’s Shield From Here

I praised the Wii version of the game for using stripped down cell-shaded graphics instead of taking a more realistic looking route. But this is the HD version with real graphical muscle and the developers have gone the realistic route on the PS3. The game looks good because of it, especially Cap himself. His default model is taken directly from the movie and is highly detailed down to the fabric pattern in his shirt. You can also unlock Cap’s WW2 Ultimates costume and the classic scale based costume from the comics. The rest of the game’s visuals are serviceable, but not outstanding. Since the lion’s share of the game takes place in and around a castle the scenery never really changes that much, but you do get a 1940’s feel so I can’t say anything bad about the visuals.

The one area that is far superior on this HD version of the game is the level design and game layout. The Wii version was very much a corridor style game, but the PS3 version is much more open. The developers have created a massive castle, complete with hedge mazes, a courtyard, a town just outside the castle, sewer systems, underground weapon factories, you name it. All of it is interconnected and as you progress through the game you will unlock new areas and be able to travel back and forth through them as you see fit. Don’t get me wrong, this isn’t an open world game like Grand Theft Auto, but it’s also not a linear experience like the Wii version.

A Plethora of Collectibles Jeffe

If you are an obsessive collector like me then you will have to go back and forth between areas in order to find the hundreds of hidden objects laying about the game. In what seems like an odd decision, the developers have thrown in an obscene amount of random objects to collect in between beat downs. There are Nazi helmets, falcon statutes, brief cases, film reels, egg statutes, documents, and even Virgin Mary statues hidden everywhere. There are so many collectibles that it distracts you from the actual game, but if you are like me then you will find yourself looking in every single corner and on top of everything you can think of to find them all.

After all is said and done Captain America: Super Soldier plays a lot like Batman: Arkham Asylum, and it probably could have been as good as that game if it had more development time.  Captain America is a good game and it’s better than the average movie tie in, but it doesn’t quite have the same level of polish that a Triple A game has. The story is serviceable, the graphics are decent enough, and the collecting can get ridiculous at times, but the combat system, the open world design , and the fact that you are Captain America beating up on quasi Nazi’s makes the game enjoyable throughout its 6 to 7  hour completion time. 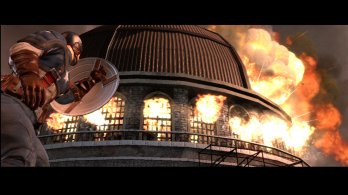 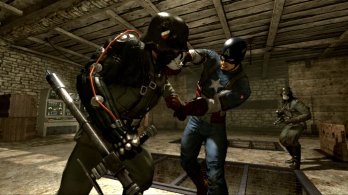 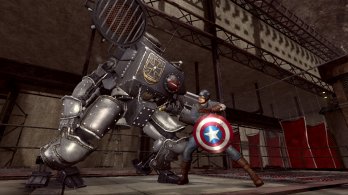 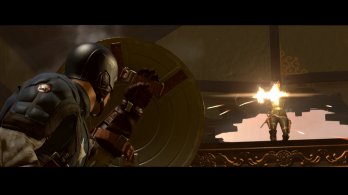 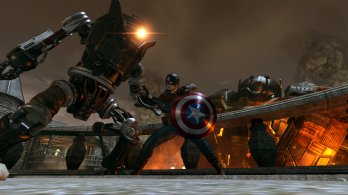 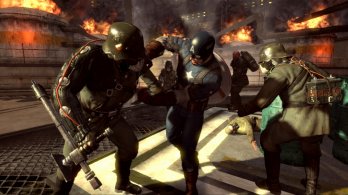 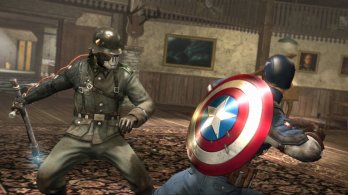 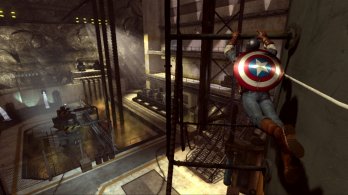 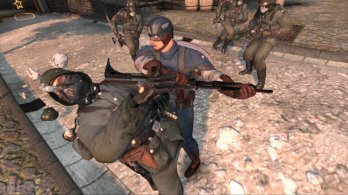