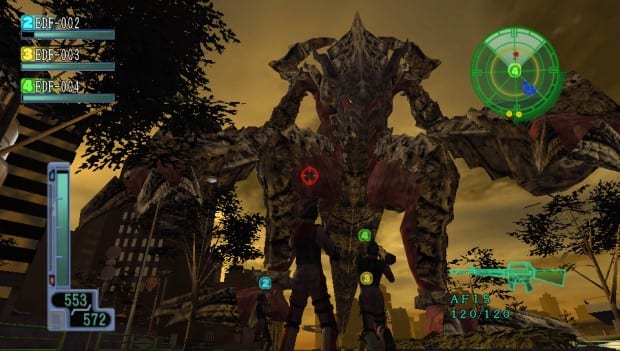 Sometimes you can’t help but to like B-movies.  You know that they don’t have the budget to hire well-known actors or put in good special effects.  Still, you get the feeling that the people involved with the movie have done their best with what they have.  Sometimes the movie is really bad, but occasionally a cult following comes from it.  The same can be said about Earth Defense Force 2017.  Now the EDF is coming back on your Vita, with Earth Defense Force 2017 Portable.

EDF2017 Portable is a straight-up port of the Xbox 360 original.  Earth is attacked by lots and lots of bugs.  If you remember the scenes in Starship Troopers where massive crowds of bugs are bullrushing towards the heroes, then you know what you are in for.  Waves and waves of bugs come at you, and it’s the job of you and your squad to kill them off.  Hope you have enough bug spray.

[singlepic id=10624 w=320 h=240 float=left]When you take a look at the graphics, the game looks bad by any reasonable standard.  The textures are all flat, you wonder if the polygon counts of every building and bug can be counted on your fingers and toes, the animations are stiff, and the laws of physics have been blown away like a bug hit by a rocket launcher.  Power-ups are flat, giving you a sense of distortion not seen since The Terminator: Future Shock on the PC (released in 1995). Giant ants slide around on the ground, and fly into the sky when they die.  Rigor mortis also sets in instantly, because they legs of the ants stay bent in the same position.  When a pile of them stacks up, you have a hard time figuring out which ones are dead and which ones are alive until they magically disappear.  Pop-in is constant, and when a large number of enemies is there on the screen you will get some slowdown.

While I enjoy having an enthusiastic crew along for the ride, your squad takes it to the extreme.  They cheer at almost every bug that is killed.  It gets repeated over and over again, which can get very annoying quickly.  A news reporter also gives you color commentary in the background, having a true talent of stating the obvious.

The missions for EDF2017 Portable are short.  Usually this is a deterrent on the home consoles, but since the Vita is a portable the mission length makes sense, giving players the opportunity to play in short bursts without having to worry about keeping the Vita in standby mode for fear of losing their progress in the middle of a mission.  However, the 60 total missions do grind on you after a while, especially since each mission basically just has you shooting all the bugs you can.

[singlepic id=10628 w=320 h=240 float=right]Controls in EDF2017 are similar to your typical shooter.  It is a little more difficult to control on the Vita because the analog sticks are so short.  You can ramp down the sensitivity to help adjust for this.  Most of the time you’ll find yourself wildly swinging your weapon trying to hit the oncoming bugs.

As you progress through each level, the enemies drop off power-ups for you to pick up.  These include health packs, armor which gives you a higher max health for your next missions, and new weapons.  The higher the difficulty level you play it on, the better the loot you get.  By the time you finish the game your toy chest of weapons will be second to only Borderlands.

You also can choose what difficulty level you want to play before each individual mission.  The game is hard on the higher difficulty levels, but it’s not because of the AI. Instead, they just overpower you with sheer numbers.  It’s kind of like a tank rush, but with giant killer ants.

One added feature of EDF2017 Portable is the addition of Pale Wing, a female member of the EDF.  Since she wears a jet pack, using her character plays much differently from the generic soldier you play.  This may be the only reason you have to get through the initial 60 levels, but at least she isn’t some creepy cheesecake character that only uses a different skin.

[singlepic id=10620 w=320 h=240 float=left]The original game had split-screen gameplay.  Since you don’t have enough controls or screen to blast bugs with your buds on one console, a new online multiplayer feature has been added.  You can play four-player co-op through all 60 missions if you like, twice as many players as the original game. There’s also a versus mode, but let’s face it, you just want to kill all the alien scum out there.

It’s hard to believe that Earth Defense Force 2017 came out in 2007.  It is one of those games that grows on you, even though you know how terrible everything about it is. EDF2017 Portable is the same way.  There hasn’t been this much camp since the Batman TV series.  Instead of pretending to make it feel serious, it embraces their shortcomings and you can almost feel the heart behind the game.  However, the $40 price tag is a bit steep, especially considering that the original Xbox 360 version sold for a budget price when it was released.  Still, if you want a game that you can pick up, play for five minutes, and put back down again, there are much worse alternatives than Earth Defense Force 2017 Portable.