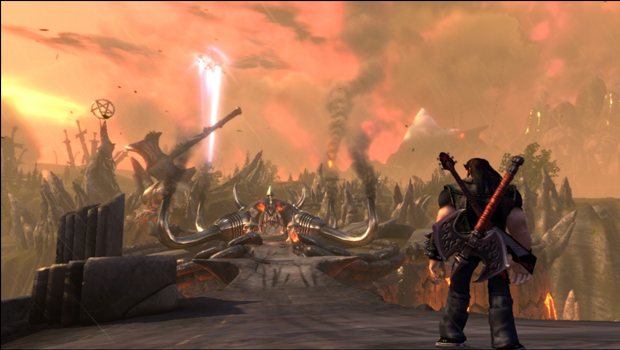 It’s been several years since Brutal Legend came out on the consoles to much fanfare over its style and setting, but more than a little controversy about its chosen style of gameplay. Well, now PC gamers can take a crack at the title – it’s out on Steam for a retail price of $19.99 USD, $24.99 to pick up the original soundtrack as well – and either version also has the Hammer of Infinite Fate and Tears of Hextadon multiplayer map packs included. There’s nothing new here in terms of story content or major gameplay revision, so while GT’s old in-house review stands the test of time in terms of content, the burning question is –  did Double Fine manage to do a good job porting this game to the PC ? Well, there’s been bumps in the road on this title, but the answer for the most part is “yes”. And for a game as unique as Brutal Legend, that automatically pushes it into the “worthy buy” column – and a must-buy for metal fans who didn’t pick this title up when it came out on the consoles.

One nice thing about console-to-PC ports in the recent years is that there’s been a noticeable uptick in their general quality. Once upon a time these ports pretty much guaranteed you poor performance and subpar graphics, but for a variety of reasons this has become a rarer and rarer situation. Brutal Legend largely continues the positive side of this trend, though in this case this has a lot to do with Double Fine’s willingness to chase after bugs and problems being reported after the game’s launch. There have been complaints about the fps performance chugging a bit, and some loading issues – but at this point, most of the major problems seem to have been ironed out. A lingering issue I’ve experienced is the now-and-then presence of the Windows mouse icon on Brutal Legend’s screen when trying to play, which also pairs up with a lack of mouse responsiveness in the same situation. This isn’t constant, thankfully, and I haven’t experienced anything that could be called truly game-breaking.

[singlepic id=11066 w=320 h=240 float= left]For a several year old game, Brutal Legend still manages to look gorgeous. Since the visuals are largely untouched from their original console deployment, I have to give credit where credit is due – Double Fine crafted a truly beautiful, unique world to experience. The environments, the allies, the enemies… everything has a kind of signature style to it, and that’s gone a long way in helping this game age properly. Between creatures as unique as the impossibly long-legged Battle Nuns and the general cartoony design of the world and its inhabitants, this is a world that’s going to not only look good for a few years more, but stand out as memorable no matter how much time passes. There really is no other title out that really compares to it in those terms.

So if the game is still standing the test of time in terms of graphics and environment – and, of course, it has a soundtrack that rivals the Grand Theft Autos in terms of quality content, at least if you’re a metal fan – what’s really left to wonder about is the gameplay question. Here I can report that Brutal Legend carries over nicely to the PC. Aside from the aforementioned occasional mouse glitch, running around with the standard mouse/keyboard combo is entirely serviceable. Not perfect or excellent, mind you – again, this game is largely a straight up port from the consoles, so it’s best to say that Double Fine adapted the game to PC controls more than anything – but the controls don’t get in the way of enjoying the game, and that’s about as much as I can ask for with this title.

[singlepic id=11065 w=320 h=240 float= right]In fact, the ‘gets the job done’ aspect of Brutal Legend’s controls may well be the one area where the title is actually superior to the original console versions. While having a heavy action component, the game (in)famously has a considerable but light realtime strategy aspect to it – something that many players found a little on the unwieldy side on the consoles. Now, I play RTS games pretty often so it’s not as if I’m coming to this control scheme fresh, but I will say that I found controlling my liberated allies in the game to be pretty easy to manage, and certainly easy to remember the commands for. Once again, I’m not describing some beautifully fluid and totally intuitive system, but very much average, easy-to-learn-and-use methods for maintaining battlefield order – and that’s about all I could really ask for.

That brings me to the multiplayer. Now, I want to give Double Fine credit – it really seems like they put a lot of effort into making the multiplayer part of the game. Creating a world as unique as Brutal Legend’s, making the story so interesting and fun, and adding on a functional multiplayer that even has three distinct-feeling sides is commendable. But at the end of the day, it just didn’t grab me. While there may not be many alternatives to Brutal Legend when it comes to the particularities of its story and single-player concept, there are an abundance of alternatives on the realtime strategy side of things. Again, I love that they went through the effort of organizing and balancing three distinct sides – but if I want to play that sort of game, I will play a game other than Brutal Legend.

[singlepic id=11063 w=320 h=240 float= left]Ultimately, I’d say the PC version of Brutal Legend is worth throwing money down for, at least for anyone who liked what they saw of the console version but didn’t have the means to play it, or who just plain never got around to it. While nothing really new has been added, it’s a serviceable port of a game that still stands out as unique, in a world that has yet to be replaced – or even challenged – in terms of its unique setting and storyline. $19.99 USD is a more than fair price to ask for this game, and considering how Steam discounts usually go, it won’t be long before this title is an absolute must-have for anyone who can tolerate the curious RTS design decisions.