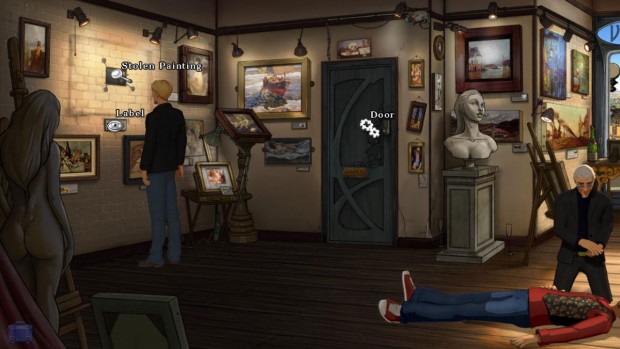 Maniac Mansion, Day of the Tentacle, The Longest Journey, Sam and Max Hit the Road, Full Throttle, Grim Fandango, The Secret of Monkey Island, Gabriel Knight, Kings Quest, and Broken Sword – it’s these games and their sequels that made me fall in love with point and click adventure games. While the last ten years have been punctuated by brotactular shooters and MOBA clones, the point and click adventure has fallen by the wayside. People wondered aloud where the good stories went. Revolution Software remembers…

Back in 1996, Revolution Software introduced us to Broken Sword: Shadow of the Templars. The story centered around an American tourist named George Stobbart who witnesses a terrorist bombing at Paris cafe and his quest to unravel why it happened. Shadow of the Templars’s voice acting and excellent graphical presentation were far ahead of its contemporaries, and they’re still better than many titles we see today. Now, 17 years later, we get the fifth title in the series. It’s been far too long since we’ve had a good point and click adventure. Could Broken Sword: The Serpent’s Curse help us remember our childhood?

The first thing long standing fans of the series will notice is the shift from from the 3D approach of Broken Sword: The Angel of Death back to the 2D roots of the original. Revolution used high-detail 3D models for all of the characters dropped on top of a semi-2D plane. The result is a preservation of the original style that allows for a good degree of visual fidelity. Beyond the look of the characters and environment, the UI for the game is perfect. A small suitcase in the corner holds objects found in the environment, but other than that there literally is nothing on the screen but the world for you to explore. Hovering your cursor over an object of interest gives you an intuitive image like an eye for a description, a mouth to talk to a subject, a magnifying glass to indicate the possibility of closer inspection, or a hand for grabbing items.

Numerous studies reveal that less than 10% of people finish the games they start. Perhaps Revolution hoped to encourage players to finish The Serpent’s Curse as the game doesn’t rely on overly complex puzzles. In most cases everything you’ll need to complete a puzzle is found in the environment where it is used – no pixel-hunting required. You won’t need to find a battery on one side of the planet to use it on the other. The simple and intuitive UI makes combining an object inside your inventory is as simple as clicking on one and then the other. Unlike, say, a Monkey Island title, these combinations are fairly straightforward and well-rooted in reality.

Like the original, the voice acting is solid in Serpent’s Curse. George and Nico turn in decent performances, and Laine is slimy enough as a minor foil. Ancillary characters are a mix of good and bad, though most of the uneven voice acting comes from running through the various questions you might ask them in order from left to right. If there was one area of audio that had me scrambling for the sound settings, it was the music. The vast majority of the time it does what background music is supposed to do – stay in the background. Then there was “Jasmine”. This particular song is used as a plot point in the game several times. During these events it plays incessantly, and if I never hear it again it’ll be too soon – kudos to Revolution for allowing me to turn the music off independent of everything else.

There are plenty of cool throwbacks to the original games, as well as vistas any tourist would love to see. My wife even noticed the Pink Floyd cover for Animals as a background for one location, flying pig and all. They serve as a solid backdrop, but what if you’ve never played any of these games? Obviously you’ll miss out on some of those nods to the past, but the great news is that you won’t get lost. My wife has never played any of these games and she was able to follow the plot without any issues. I got a few more tidbits having played the predecessors, but the game stands on its own just fine.

The first episode will keep you busy for about six and a half hours, but then you’re stuck waiting until some time in Q1 for the game’s conclusion. Some of that time will be waiting for some of those slick 3D animations to go through their gestures or walk slowly across the screen before they do what you asked them to do, but it comes with the territory. Serpent’s Curse is a throwback to days past, and that includes some of the technical mores that died as the adventure game was laid low by growling bros with chainsaws.

Broken Sword 5: Serpent’s Curse is an adventure game through and through. The satisfaction comes not from high speed chases, but rather from patiently working the clues to uncover layers of mystery heaped upon one another hiding an evil curse. Here’s the rub - it’s half of a game. It’s very hard to judge half of a game. The first few hours are slow going, but when the credits rolled I wanted to see where where things went from here. My recommendation for this game is largely dependent on two things - love for adventure games, and the promise of a satisfying conclusion. I’m treading carefully, but after playing Episode 1, I’m cautiously optimistic.